Coach Stephen Danford was yelling at a black student during basketball practice last season at Arcadia High School, according to a new report from the school district. Danford, who had been the head coach for at least six years at the school, which is located in an affluent area of east Phoenix, never told white kids to cut their hair. Or, if he did, he asked them privately, said the report, which summed up an investigation into allegations of discrimination and racism by two boys' basketball coaches at the school.

The probe that produced the report began started in February after Brian Ali, a parent and assistant coach, brought his concerns to the Scottsdale Unified School District. He reported to officials that he'd witnessed years of racist comments and differential treatment on the basis of race.

Yet that two-page report, shared with parents on May 24, appeared to clear the two coaches of deliberate racism, saying the investigation found "no 'direct evidence' of bias, such as racial slurs." Instead, it noted blandly, "It is evident that there was at least a perception of disparate treatment and reports of a hostile environment based on race experienced by African American student players."

The document was titled "Report/Conclusions," but the district was still interviewing students last Thursday, according to Ali, who also was interviewed as part of the investigation.

Todd Stevens, the high school principal, and Michelle Marshall, general counsel for the Scottsdale Unified School District, conducted "a thorough investigation, interviewed witnesses, and reviewed documents," said the report, which was obtained by Phoenix New Times. The report recommended counseling and diversity training for Danford and for Phillip Lozevski, an assistant coach.

Ali called the report "a joke."

“For them to come back with those kinds of recommendations [diversity training] ... that’s totally unacceptable," he said. The head coach was not fit to run a basketball program, he said.

In response to questions about the investigation, Amy Bolton, public information officer for Scottsdale Unified School District, said the district could not comment on specific personnel matters or students, due to student privacy law.

"We can share that when any student, parent or employee brings forward concerns about fair and equitable treatment, they are taken very seriously and fully investigated," she said via email. "We continuously strive to treat all students, their families and our colleagues equitably and fairly, with compassion and understanding."

It's not clear how investigators were able to issue a report containing conclusions when they had not yet finished their interviews. Ali said he was told those conclusions were not final, and he expected the district to make a decision this week about the coaches.

Reached by phone Monday, Danford said he had no comment.

Lozevski, also reached by phone, said, "I don't know anything about it." According to the two-page report, Danford was interviewed for the investigation, but it's not evident that Lozevski was. 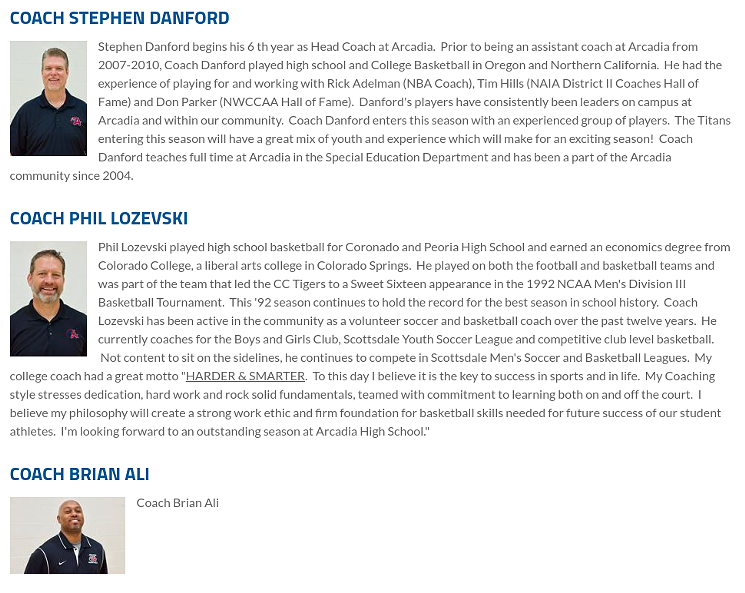 The three coaches for the boys' basketball team at Arcadia High School last season.
Arcadia Boys' Basketball website
Ali, who was the head coach for the freshman team a year ago and an assistant varsity coach for most of this past season, said he regularly witnessed Danford favoring white players. Sometimes black players endured outright racial slurs and racist comments, he added. Other times, they were coached differently from their white teammates.

A few years ago, his son, one of the players, was called the n-word by a white teammate, Ali said. As punishment, Danford suspended the white player for two games. He did not tell the school's athletic director, according to Ali, adding that not only did the white student admit to using the word, but that the white student's mother also emailed Danford about the incident the next day.

He said he told investigators about both of these cases, but neither is mentioned in the two-page report that found "no 'direct evidence' of bias, such as racial slurs" after "a thorough investigation" that included reviewing documents.

The report called the comment "legitimately offensive ... evoking images of breaking slaves or chattel" but gave the coaches a pass. It said that Danford "did not understand how that comment might be taken by an African American."

The discrimination manifested on the court, Ali said. Getting black students playing time "was like pulling teeth." Danford coached black players and white players differently, encouraging white players to dribble and shoot while discouraging black players from doing the same in practice and during games, he said.

Nevertheless, the report found that evidence did not support the allegation that black students received less playing time than their white teammates. It also refuted an allegation that a decision not to move three black players to the varsity team was race-based, citing "no evidence."

It did, however, note that the three players advanced to the varsity level only after Ali advocated for them.

Black players themselves could tell they were treated differently, according to Ali. They would approach him, the one black coach, in confidence, and ask, "How come coaches don't give us a chance?"

Ali was an assistant coach until January 22, when Danford cut ties with him via email.

"I take it by your absence from practice and lack of communication ... that you have decided to move on in [a] different direction, which I think is the best from every one [sic] involved at this point," he wrote Ali in an email that Ali shared with New Times.

"I know that we have all been frustrated over the last few weeks," Danford added, without going into more detail.

According to Ali, the incident when Danford yelled at a black player to "cut your fucking hair" took place during a practice over Christmas break. Ali said he told Danford, "'Dude, you can't tell him to cut his hair.' I had to remind him, his hair is going to be different."

Ali said that he had missed one practice — the first in two years — in January after a lack of communication about whether there would be practice at all, before Danford let him go. It's not clear whether investigators were aware of Ali's firing or took it into account. The report does not mention it.

He waited for the basketball season to wrap up, and then in February, Ali and another parent went to the district superintendent with their concerns.

Ali decided not to go to the athletic director, Cher Fesenmaier, who had broken his confidence after Ali had previously raised concerns — privately — about how black and white kids were treated and coached differently, Ali said.

As parents await a decision from the administration this week, Ali maintained that Danford should not be allowed to coach.

How could he allow other coaches to talk about "breaking" a kid? he wanted to know.

“I’m supposed to accept that? And you, as the head coach of your program, allow your coaches to talk like that and to treat players like that?” Ali asked. "He has to go."
KEEP PHOENIX NEW TIMES FREE... Since we started Phoenix New Times, it has been defined as the free, independent voice of Phoenix, and we'd like to keep it that way. With local media under siege, it's more important than ever for us to rally support behind funding our local journalism. You can help by participating in our "I Support" program, allowing us to keep offering readers access to our incisive coverage of local news, food and culture with no paywalls.
Make a one-time donation today for as little as $1.
Elizabeth Whitman was a staff writer for Phoenix New Times from March 2019 to April 2020.