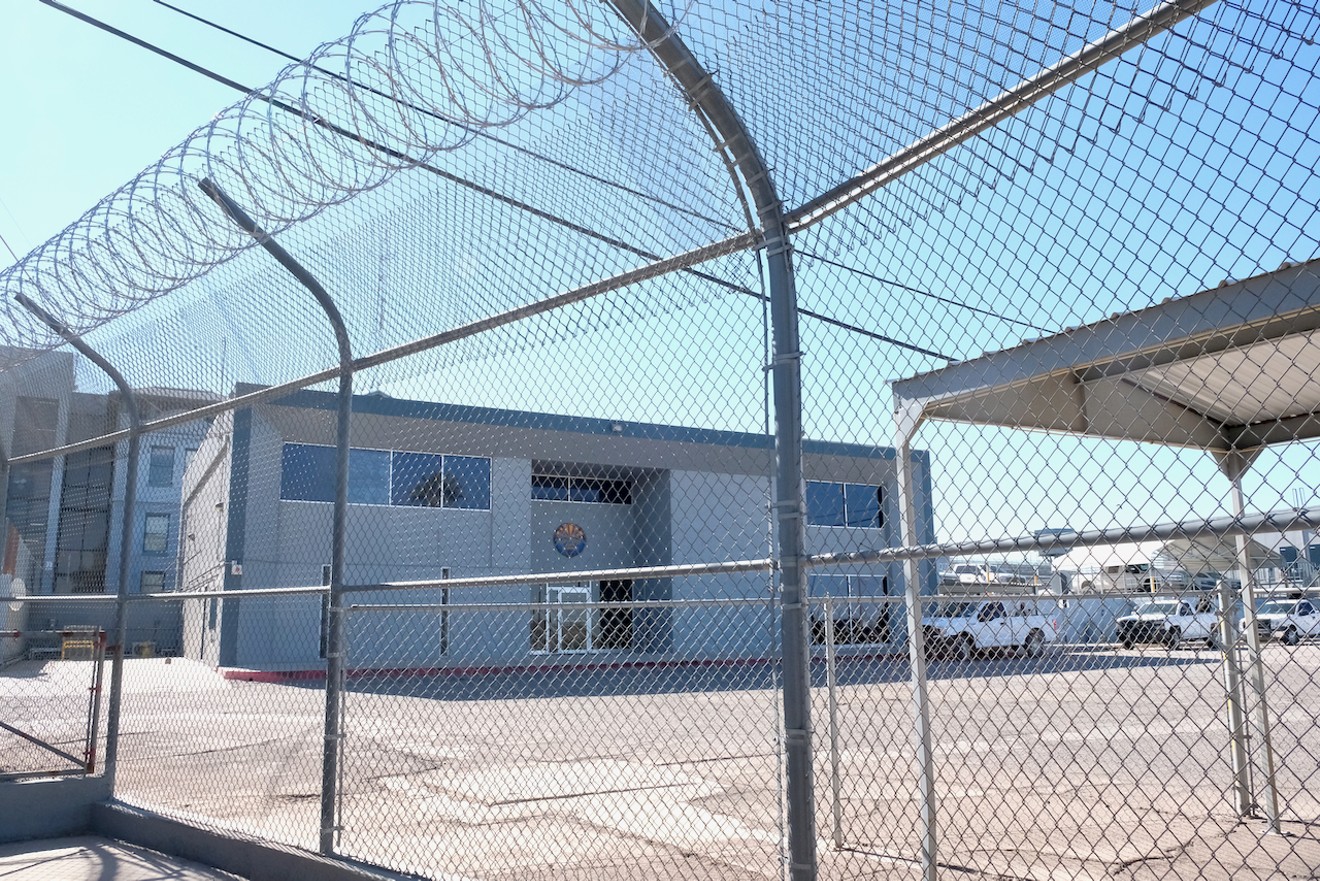 Murray Hooper was executed November 16 inside the Arizona State Prison Complex in Florence. Katya Schwenk
The state of Arizona executed Murray Hooper on Wednesday. He was convicted of a 1980 double murder in Phoenix in a case tainted by allegations of police misconduct.

Hooper was pronounced dead at 10:33 a.m. at the Arizona State Prison Complex in Florence, bringing to a close his 39 years on death row. The sprawling facility, which looks out on the barren desert, is where the state has been carrying out its executions. Arizona paused executions for eight years after the botched death of Joseph Wood in 2014.

Hooper is the third person to be executed since May.

Hooper died by lethal injection before the eyes of reporters and lawyers. No one from the families of Pat Redmond and Helen Phelps — whom Hooper was convicted of killing — was present at the execution, according to officials with the Arizona Department of Corrections. Hooper’s family was notified, but they were “out of state” and did not attend, ADOC spokesperson Judy Keane said.

Murray Hooper was executed on November 16 in a case that has stretched on for more than 40 years.
Arizona Department of Corrections
Mike Redmond, the son of Pat Redmond, told Phoenix New Times in an email that the loss of his father is still felt deeply, but that the family did not want to be part of the execution. "Right now I feel for my dad; my stepmother, Marylin; and her mom, Mrs. Phelps," he said. "We thought this was all behind us. I don’t celebrate Hooper's death. But I won’t or didn’t oppose it. He made choices in his life that were bad and led to New Year's Eve 1980."

"Forty-two years later, and we are dealing with our father's death again. I thought it was all past us," Redmond added. He said he didn't expect the day to arrive. "It is hard to understand right now. Just glad it is all over, and maybe everyone can finally be at peace," he explained.

Three journalists — Mark Curtis of Channel 12 News, Bob Christie from the Associated Press, and Colton Krolak of KTAR News — witnessed the execution. At a press conference shortly after Hooper’s death, each described what took place.

Hooper, Curtis told reporters, “seemed to go back and forth between quiet resignation to his fate to finding humor in what was going on.” Hooper chuckled as prison staff applied a topical anesthetic before inserting the IV, Curtis said.

Asked to give his last words, Hooper said, “It's all been said. Let it be done. To all my lawyers and loved ones, don't be sad for me, don't cry. Don't say goodbye, but say, I'll see you later. Let’s go.” Within a minute of the drugs being administered, Hooper appeared to quietly lose consciousness.

A chaplain was present in the small execution chamber and prayed.

As in the last two executions conducted, the executioners — whose identities and medical training are not made public — struggled to insert the IVs to administer the lethal dose of pentobarbital, according to witnesses. It took around 25 minutes for the IV lines to be inserted, although Hooper did not appear to feel pain, Curtis said.

According to Christie, the executioners examined Hooper and informed him they would be inserting one IV in his femoral artery in the upper leg and the other one in his upper right arm. It took around 10 minutes to complete the femoral artery procedure after using a sonogram to find the artery. Then, after this was successful, they attempted to insert an IV into his right arm. This failed at first, but the second attempt was successful. "At one point while all this was going on," Curtis added, Hooper "looked at the glass and said, 'Can you believe this?'"

After the IV lines were inserted and the warden read off the warrant of execution, Christie said, a few moments passed before the drugs were administered. "What's taking so long?" Hooper asked. 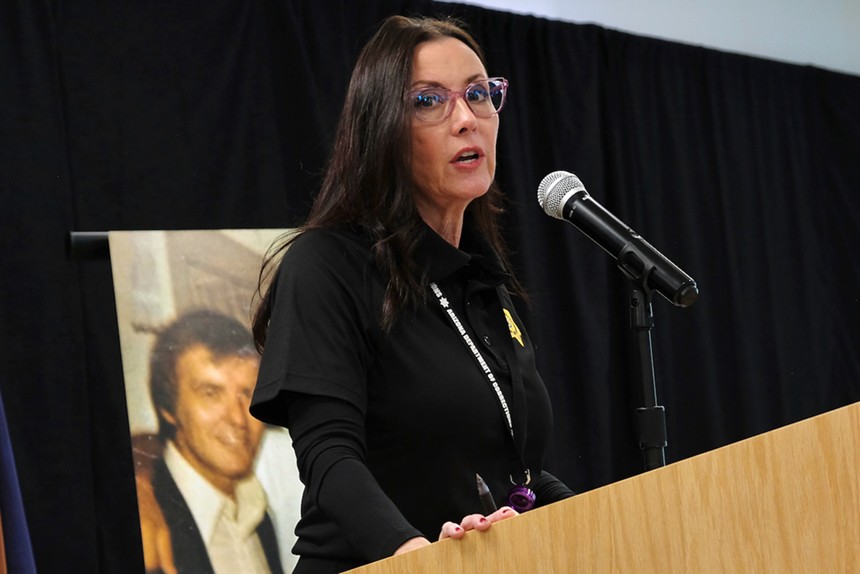 Judy Keane, a spokesperson for the Arizona Department of Corrections, said relatives of Murray Hooper chose not to attend his execution.
Katya Schwenk

Misconduct or ‘Smoke and Mirrors’?

Hooper’s death marked the conclusion of a case that has stretched on for more than 40 years.

In a series of high-profile trials, Hooper and two other men were convicted of murdering Pat Redmond and his mother-in-law, Helen Phelps, in their north Phoenix home on New Year’s Eve 1980. Redmond’s wife, Marilyn, was shot in the head but survived.

The prosecution claimed the murders were part of a wide-ranging plot by Chicago crime boss Robert Cruz to murder Redmond to further his own business interests. They claimed that Cruz and several of his associates hired Hooper and two others to kill Redmond. Many of Cruz’s own associates served as witnesses in the trial, sometimes in exchange for significant benefits. Cruz himself had multiple trials, ultimately was acquitted, and later was killed in Illinois.

Hooper initially admitted to police he was involved, though in the decades since has claimed he's innocent. Hooper said he was set up by Cruz’s associates and then railroaded by the criminal justice system.

No physical evidence tied Hooper to the scene of the crime. His attorneys have spent years trying to discredit the prosecution and argued that the lead police investigator engaged in “extensive misconduct,” including questionable tactics to encourage witnesses to testify. Multiple witnesses who knew Hooper personally testified that he was involved, and he was identified by Marilyn Redmond in a police lineup.

Mike Redmond said that the claims of misconduct were simply “smoke and mirrors.” The family has been supportive of the death penalty in Hooper’s case and submitted a letter opposing his clemency at a recent hearing. 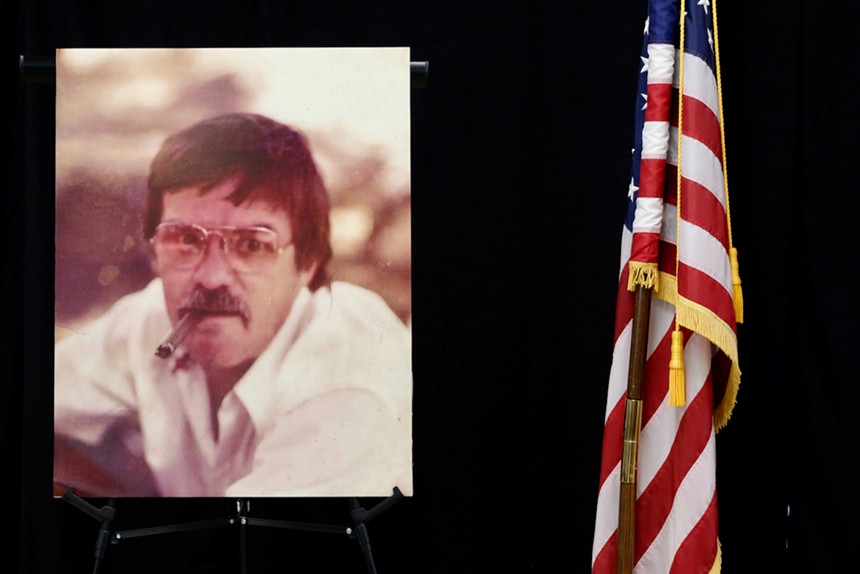 A photo of Pat Redmond, who was murdered in 1980, was displayed during a press conference after the execution of Murray Hooper.
Katya Schwenk

Long Wait for ‘Any Justice’

Redmond remembered his father as a “good guy” who had resisted "shady" business dealings by Cruz.

In 1968, before the Redmond murders, Hooper pleaded guilty to manslaughter for shooting and killing his then-girlfriend. After a decade or so in prison, he was released and then received a death sentence in Illinois for his involvement in a separate triple murder, although that conviction was ultimately vacated due to issues at trial.

Redmond said he was skeptical that police corruption was behind each of these convictions and called Hooper a “killer for hire.”

“I was a 23-year-old sergeant in the Marine Corps when my dad was murdered,” he wrote. “My sisters were 22 and 21.” They had to wait until their 60s “before we saw any justice in this case,” he said. Mike Redmond became a police officer working in criminal investigations for most of his career.

Capital cases such as Hooper’s take decades to resolve. Of the 111 people on Arizona’s death row, fewer than two dozen have exhausted their appeals. Those who have are mostly, like Hooper, in their 70s or 80s. As a result, Arizona has been mainly executing the elderly.

And, like Hooper, their time may be running out — although now that elections have given Arizona a new governor and likely a new attorney general, the future of the death penalty in the state is less clear.

A spokesperson for Brnovich did not respond to questions about whether the attorney general intends to seek more death warrants before he leaves office in early January — or who will be the next death to occur in Florence.
KEEP PHOENIX NEW TIMES FREE... Since we started Phoenix New Times, it has been defined as the free, independent voice of Phoenix, and we'd like to keep it that way. With local media under siege, it's more important than ever for us to rally support behind funding our local journalism. You can help by participating in our "I Support" program, allowing us to keep offering readers access to our incisive coverage of local news, food and culture with no paywalls.
Make a one-time donation today for as little as $1.