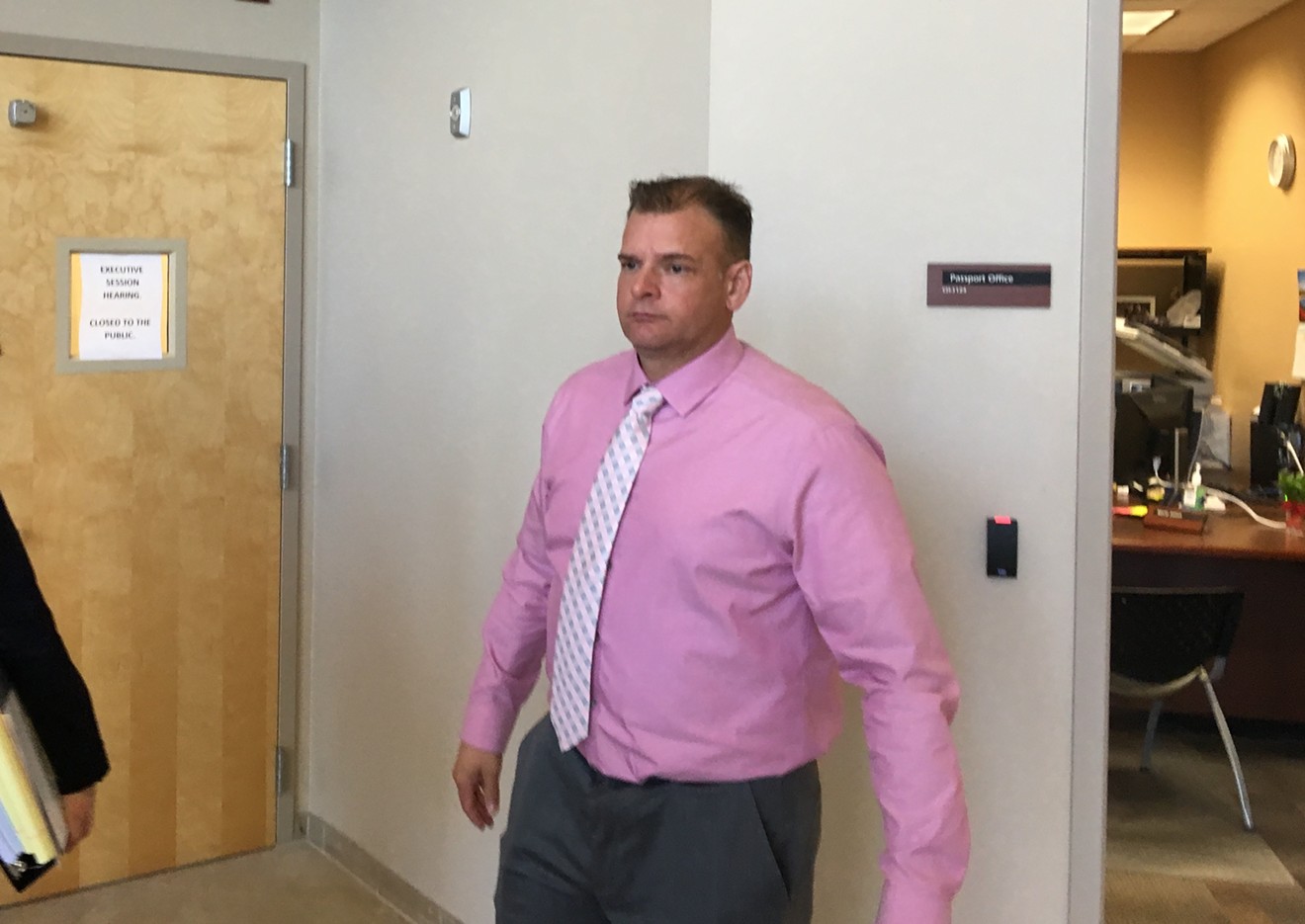 Sergeant Sean Maas takes an intermission as he appeals his firing at Avondale City Hall. Steven Hsieh
The city of Avondale upheld the firing of a white police sergeant for making Facebook posts denigrating an African-American woman.

Sergeant Sean Maas was terminated from the Avondale Police Department on September 13, 2018, after two colleagues reported his “racially insensitive” Facebook posts to command staff. The posts had been viewed by at least 400 people, including city employees.

Maas appealed his termination through an attorney representing the Avondale police officers’ union.

Independent hearing officer Prudence Lee, deeming the posts “hate filled” and in violation of city policy, recommended denying Maas’ appeal, according to a ruling. The city upheld the sergeant’s termination, according to a January 29, 2019, letter to Maas from City Manager Charles Montoya.

According to an investigative report, Maas’ posts appeared to be directed at Erica Sayles, a black woman with whom Maas and his wife, Melissa Maas, were engaged in a business dispute.

Sayles claimed in a lawsuit that Melissa Maas improperly removed her as a co-owner of a beauty salon and added her husband, Sean. Maas claimed that Sayles violated a settlement agreement related to the business.

A photo of a screenshot of one of Maas' posts used by Avondale police during their investigation.
City of Avondale
On April 4, 2018, Maas posted a meme-type photo of a large black woman along with the caption, “Ya’ll better cease and desist or I’ll sue.” He posted the same photo the next day with the caption, “Nuh-uhh! Call my lazy, obese ass lazy or obese, and I’ll sue you for body shaming!”

Melissa Maas responded to the second photo with a picture of a gorilla. Another mutual friend, identified in the investigative report as “Jarrod,” responded with a “video of a gorilla with changing hair styles.” Maas “liked” the gorilla video.

On April 23, 2018, Maas posted another meme-type photo of a black woman with the caption, “I ain’t following no agreement. I’m taking all dis shit. This is my salon."

Maas claimed during his hearing that the posts were solely directed at Sayles, and not intended to disparage African-Americans in general, according to hearing officer Lee’s ruling.

In an earlier hearing related to his termination, Maas told Assistant City Manager Gina Montes that he has friends who are black and Hispanic, allegedly demonstrating that he does not have a bias toward African-Americans.

“You also offered your minor in African American studies as proof that you are not biased toward African  Americans,” Montes wrote Maas in a letter on September 13, 2018.
KEEP PHOENIX NEW TIMES FREE... Since we started Phoenix New Times, it has been defined as the free, independent voice of Phoenix, and we'd like to keep it that way. With local media under siege, it's more important than ever for us to rally support behind funding our local journalism. You can help by participating in our "I Support" program, allowing us to keep offering readers access to our incisive coverage of local news, food and culture with no paywalls.
Make a one-time donation today for as little as $1.
Steven Hsieh was a staff writer for Phoenix New Times from August 2018 to April 2020.
Contact: Steven Hsieh
Follow:
Twitter: @stevenjhsieh