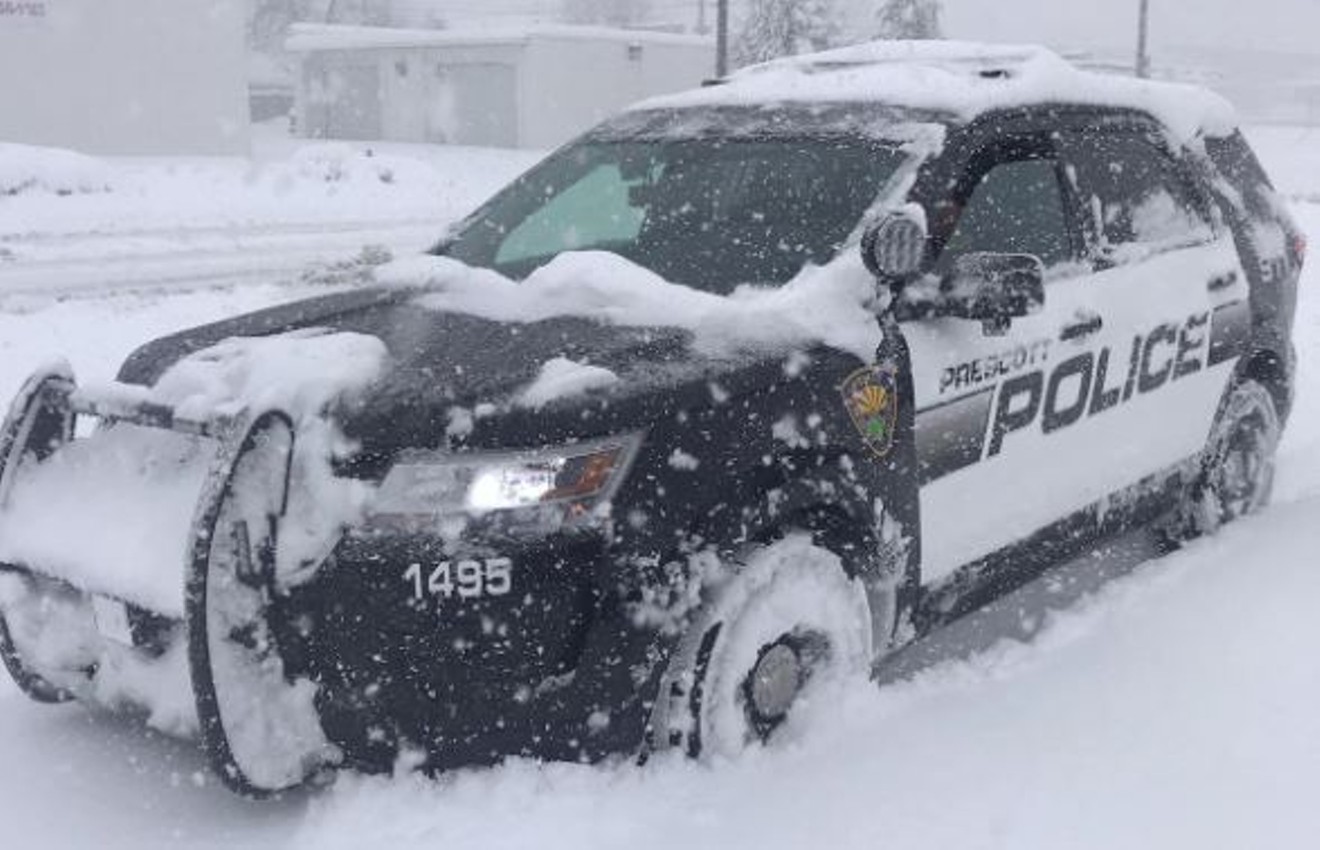 Did Hunter Biden have a snow day in Prescott? Courtesy of Prescott PD
How did Robert Hunter Biden, son of Democratic presidential candidate Joe Biden, escape a cocaine charge in 2016 in Yavapai County, where even medical marijuana patients get busted for possessing marijuana?

At first glance, it seems Biden might have gotten a political pass after he returned a rental car in Prescott on October 27, 2016. The car contained a pipe with cocaine residue and a small amount of a white, powdery substance.

After all, Prescott, a northern Arizona town of about 42,000 people, is the county seat of Yavapai County, home to County Attorney Sheila Polk, the state's foremost pot prohibitionist.

In office since 2000, Polk led a successful campaign to defeat a legalization measure in 2016. She encouraged police to write up felony charges on people in possession only of cannabidiol (CBD), a hemp compound that doesn't get people high. And her penchant for locking up medical marijuana patients has resulted in a pending state Supreme Court decision over the legality of cannabis resin extracts.

Biden, a 49-year-old lawyer and managing partner of the investment firm Rosemont Seneca Partners, has a little problem with cocaine — that much is publicly known. In 2014, he got booted out of the Navy Reserve, where he'd served as a public affairs officer, after he tested positive for cocaine. So it's not a stretch to imagine that it was indeed the then-vice president's son who left the drugs in the rental car that day in Prescott.

Breitbart.com made the 21-page report on the incident public in an article last week, probably hoping to embarrass the elder Biden with it and hurt his chances as a presidential candidate. The incident doesn't say anything about Joe Biden, really, and the younger Biden never actually faced charges. But it does beg the question of why the county finds it so easy to bust state-authorized medical marijuana patients, but found it so tough to bring a drug charge against a prominent politician's son.

Phoenix New Times received an independent copy of the report from the Prescott City Attorney's Office.

As the report details, police received a call about Biden and the cocaine at about noon on October 28, 2016, from "Emily," a worker at the Hertz rental car office at the Prescott Regional Airport. Emily reported that someone returned a silver Jeep Compass with a bunch of personal items still inside. Those included a wallet with an attorney general's badge, two driver's licenses in the name of Robert Biden with his Washington, D.C., address, a Secret Service business card, and credit cards.

On the passenger seat was a "pipe that [Emily] thought was used to smoke meth," and a small baggie with the white powder. Emily googled Biden's name and learned that Robert was Joe Biden's son.

Prescott police officers searched the car, took photos, and impounded the items. Detectives contacted the FBI, and two FBI agents soon showed up, the report states. Biden was "located by Secret Service" and deemed to be doing "well."

Prescott authorities sent the pipe to the state Department of Public Safety for testing; the baggie with powder apparently wasn't tested. DPS later reported that the pipe contained cocaine residue but no fingerprints. Prescott police forwarded the case to the Yavapai County Attorney's Office for prosecution.

But on November 16, 2016, the prosecutor's office sent a letter to the police agency noting that it was turning down the case. It included a couple of reasons for the decision: "That charge would likely be designated a misdemeanor even if convicted at a jury trial. [Biden] has no prior felonies."

Yet Polk's office has repeatedly threatened marijuana patients and CBD users who have no prior criminal records with felonies (for cannabis) even though they were likely to be designated as misdemeanors, as most low-level drug cases are. To put it another way, the same reasons haven't stopped Polk from charging state-authorized marijuana patients for possessing cannabis resin extracts like vape-pen cartridges.

The county asked the police department to forward the case to the city for potential prosecution, which it did. The city also turned down the case.

Dennis McGrane, Polk's chief deputy, told New Times that Biden "was not alleged to have possessed a usable quantity of cocaine in this case (Class 4 felony), but rather he was alleged to have had a pipe and a torn baggie with cocaine residue (Class 6 undesignated felony). Barring a criminal history that would justify felony treatment of a particular defendant, it is our standard practice to send these cases to the prosecutor having jurisdiction over misdemeanors, in this case, the city of Prescott.

"Mr. Biden lacked that type of criminal history, so we followed normal office procedure," McGrane continued. "I think we can both agree that no person should be punished more harshly merely because of his or her parent(s)."

McGrane added that extracted cannabis resin under Arizona law, also a class 4 felony, is not eligible for a misdemeanor designation.

That, in theory, could explain why medical marijuana patients with cannabis resin have been getting the shaft in Yavapai County and someone like Biden could escape a criminal charge.

However, the city's turn-down letter — which, for whatever reason, was not in the police report as published by Breitbart — makes the reasoning by prosecutors in Biden's case much clearer than it seems in the Yavapai letter.

Glenn Savona, then the Prescott city prosecutor under Prescott City Attorney Jon Paladini, wrote in a November 23, 2016, letter to Prescott police that the case contained insufficient evidence for prosecution.

"The report does not place the suspect in the vehicle at any time that the alleged paraphernalia was present," Savona wrote in the letter, which was sent to New Times by Paladini.

"The vehicle was returned by another and, although the suspect's identification was present in the vehicle, there is no evidence to show that the suspect was present when the items were used ... or had any personal connection to the items," Savona's letter continued. "There is little investigation regarding the person returning the vehicle or when the last time the suspect had access to the vehicle. I did confirm that there is no video of the return of the vehicle to the rental business."

Savona was elected Justice of the Peace for Yavapai County in 2016.

Paladini, the Prescott City Attorney since 2013, said he didn't believe Biden received any special privileges in the case. It's possible that someone who returned a rental car with illegal drugs inside might be prosecuted if there were more evidence tying the suspect to the drugs, he said.

In this case, the suspect wasn't found with the drugs, and there were no witnesses or fingerprints. The evidence didn't pass the typical "reasonable likelihood of prosecution" test, Paladini said.

But patients like Adam Wanko, who has cancer, and Ashle Stuart, diagnosed with a nervous system disorder, were still charged after police in Prescott found them with THC vape pens. Stuart was convicted after taking a plea deal; Wanko's case is still pending.

It's not Hunter Biden's cocaine story that was likely giving him or his father the most anxiety in recent weeks: Trump has called for investigations into Hunter Biden's business dealings in Ukraine and China, and Hunter Biden ended his relationship with his deceased brother's widow.
KEEP PHOENIX NEW TIMES FREE... Since we started Phoenix New Times, it has been defined as the free, independent voice of Phoenix, and we'd like to keep it that way. With local media under siege, it's more important than ever for us to rally support behind funding our local journalism. You can help by participating in our "I Support" program, allowing us to keep offering readers access to our incisive coverage of local news, food and culture with no paywalls.
Make a one-time donation today for as little as $1.