Ekom Udofia was 33 years old and a former NFL defensive lineman who had spiraled into mental illnesses and crisis on the streets of Phoenix. Getty Images
The city of Phoenix will make two more payouts to settle lawsuits brought against its police department.

The Phoenix City Council voted to approve the settlements Wednesday afternoon. Between the two cases, the city will pay $800,000.

It's not the largest sum the city has paid in recent memory to settle a case over the conduct of Phoenix police officers. In November, the city paid $5 million to settle a lawsuit over the death of Muhammad Muhaymin, a Black man who died during an arrest. Over the years, the amount of money the city has paid out in police settlements has reached tens of millions.

One of the cases, which the council voted to settle Wednesday, was a lawsuit brought by the family of Ekom Udofia, a Black man shot and killed by officers as he approached them while holding a BB gun. He was 33 years old.

The city settled that case for $250,000, after the council agreed on a 6-2 vote. Conservative members Jim Waring and Sal DiCiccio objected without explaining their votes.
click to enlarge 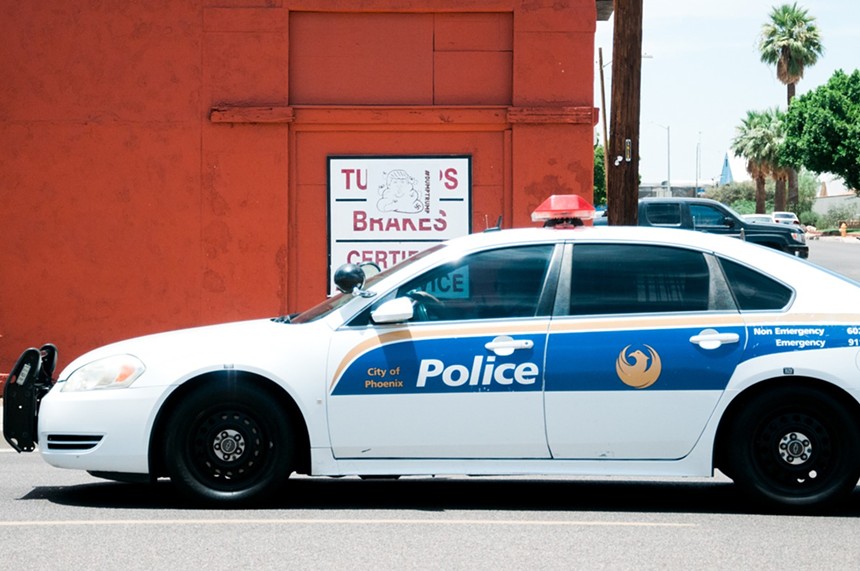 The second case, Canney v. City of Phoenix, was filed in 2019 by the family of Dawn Bestenlehner, who was hit and killed by a man driving a stolen U-Haul truck while fleeing from a Phoenix police officer. The officer, Justin Gillett, had conducted the high-speed chase down 31st Avenue without his emergency lights or siren on, in violation of department policy, attorneys argued in legal pleadings.

A crash ensued, killing Bestenlehner, who was standing on the sidewalk, waiting for a ride home from work. Attorneys for her surviving parents and children filed a wrongful death claim the next year. The city settled that case for $550,000.

The council approved the settlement in Bestenlehner's case unanimously.

A spokesperson for the city of Phoenix declined comment Wednesday after the vote. The city "doesn't have anything additional to add," said spokesperson Dan Wilson.

A settlement in the Udofia case ends the legal battle over the shooting, which at the time had sparked outcry.

A year after his death, Udofia's parents sued the city, alleging the officers' "negligence" had resulted in an unnecessary shooting. They "battered Ekom and caused his wrongful death," attorneys wrote in the complaint.

Udofia, who grew up in Scottsdale, was an ex-NFL player, and remembered by family and friends as a "gentle giant." He had struggled with mental illness, though, and on the night of his death was wandering in the street, looking dazed and jumping at cars as they passed, according to a 911 caller.

When officers arrived, according to body camera footage that captured most of what led to the shooting, Udofia did not obey commands to drop the gun. He also did not appear to point the gun at officers. Instead, he slowly walked toward them, the BB gun dangling in his left hand. The quality of the footage makes it difficult to be certain what occurred, however, and the officers involved claim they believed the gun to be real and said they feared for their lives.

After six initial shots, as Udofia approached, officers continued to shoot at him, even as he lay on the ground. While Udofia lay in the street, the officers shot live rounds at him again, then fired other projectiles at him, including pepper balls and stun bags. Finally, they set a police dog on him, which dragged him along the asphalt.

It's not clear if the officers involved were disciplined. New Times has submitted a request for those records, but it has been pending for more than two months without a response. All the officers are still on the force, according to the city's most recent records.

Lawyers for the Udofia family did not immediately return inquiries from New Times on Wednesday, but Roger Riviere, lead attorney on the Bestenlehner case, said the settlement vindicated her family.

"Dawn was beloved by her family," Riviere told New Times. The settlement, he said, "gives them closure" and was "finally an acknowledgement from the city that one of the officers failed to abide by city pursuit procedures."

The officer involved was suspended as a result of what occurred, though for less than a week, Riviere said. In 2020, he took a medical retirement and left the force, city records show. Riviere said he was in his thirties when he left.

Currently, the Phoenix police department is facing a U.S. Department of Justice investigation over its use of force — including over high-profile deaths like Muhaymin's.

The DOJ probe will be yet another legal expense for a city that — like Wednesday — regularly pays out huge sums to settle claims over its law enforcement practices. According to a report by ABC15 earlier this month, the city has contracted with big-shot attorney Michael Bromwich to represent them through the course of the probe — at a rate between $550 and $700 an hour.

Phoenix Police Chief Jeri Williams announced this month that she plans to retire, after leading the force for nearly six years. The city is now searching for an interim chief specifically to lead the department through the upcoming probe.
KEEP PHOENIX NEW TIMES FREE... Since we started Phoenix New Times, it has been defined as the free, independent voice of Phoenix, and we'd like to keep it that way. With local media under siege, it's more important than ever for us to rally support behind funding our local journalism. You can help by participating in our "I Support" program, allowing us to keep offering readers access to our incisive coverage of local news, food and culture with no paywalls.
Make a one-time donation today for as little as $1.