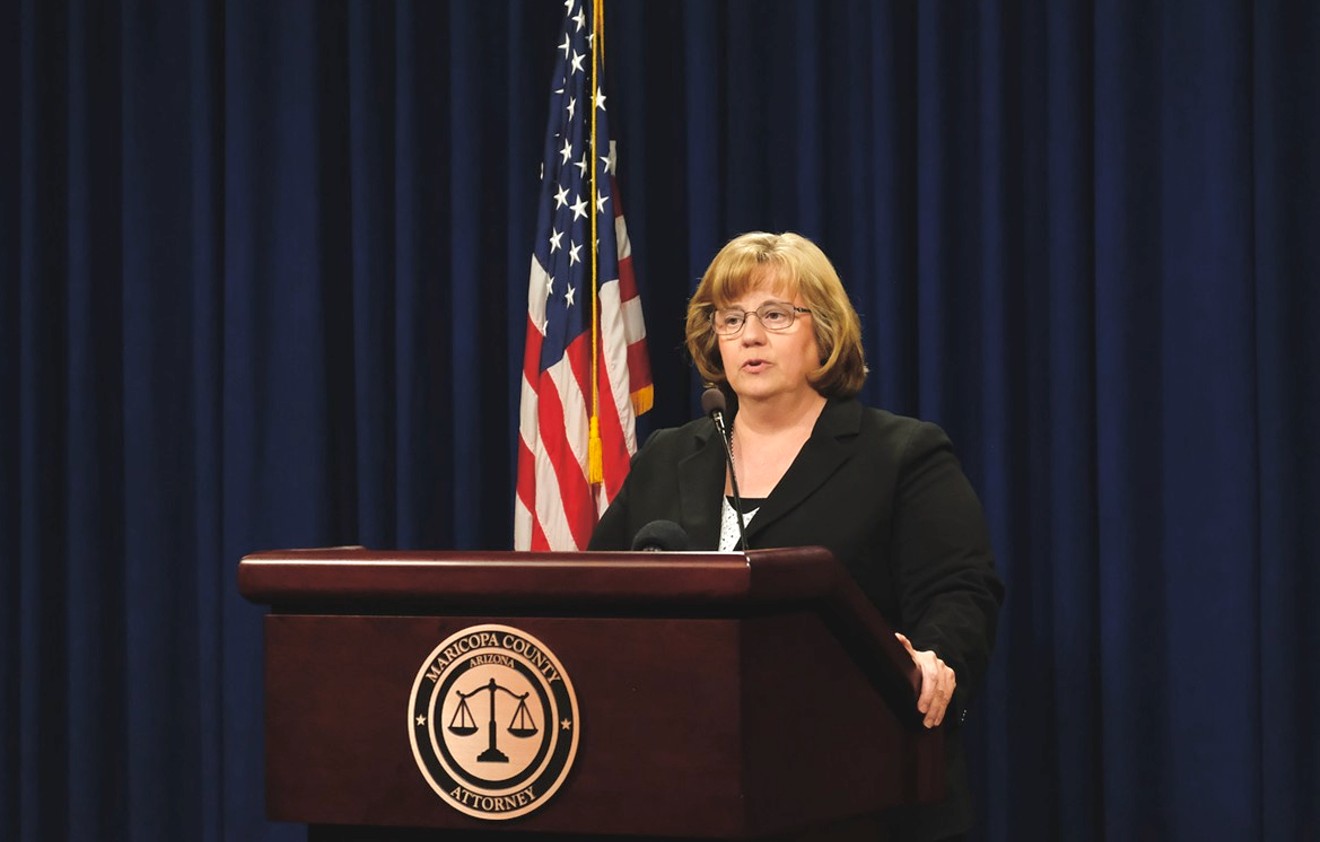 It's the most recent move Mitchell has touted as evidence that she is "cracking down on crime," as she has said in campaign emails in her November race to stay on as the permanent county attorney. She has created a specialized task force to focus on retail theft and praised harsh sentencing of repeat catalytic converter thieves.

It's not totally clear, though, how many people who were charged with the firearms crimes affected by the new policy were previously getting plea deals without prison time. The county attorney's office declined to provide specific data.

"It does happen," wrote Jennifer Liewer, a spokesperson for the Maricopa County Attorney's Office, in an email to Phoenix New Times. "With that combined with the uptick in violence in recent months, the county attorney felt this policy change was necessary."

The office described the mandated prison time policy as new when it was announced on Thursday. But records of plea guidance dating back to former County Attorney Allister Adel's tenure show that prosecutors were already directed to mandate prison time when a firearm was used in crimes. What's changed now, which Liewer confirmed, is that a division chief must sign off on any deviation from that policy.

The policy applies when a person uses a firearm in some active way to commit a crime, not just when they possess a firearm. And it doesn't apply to all charges. Four are excluded from the policy: any case that involves BB guns or pellet guns, disorderly conduct cases, endangerment cases, and unlawful discharge of a firearm cases.

The other new element of the plea policy is that anyone who is prohibited from possessing a firearm due to a prior felony who is caught with one — and is charged with "misconduct involving weapons" — must receive a prison sentence.
click to enlarge Julie Gunnigle, an attorney and Mitchell's Democratic opponent in the county attorney's race in November, pushed back on the new guidance. She called the new policy "eleventh-hour election-related policies."

"Communities that face the challenge of gun violence are not made safer by blanket plea policies," Gunnigle told New Times. She added that the county attorney's office "needs to arm our prosecutors with more discretion, not less."

Maricopa County prosecutors have long been known for harsh plea bargaining tactics. The Arizona branch of the American Civil Liberties Union is waging an ongoing lawsuit, Luckey v. Adel, over plea practices it has alleged are coercive.

In response to this criticism, Liewer said the county attorney's office was engaged in other, more reform-minded initiatives to address gun violence — but defended the new plea policies. "Those who commit the violence need to be held accountable. Removing them from the community will reduce the number of cases that include these individuals," she said. But the office also offers diversion programs to low-level offenders, she added.

Liewer declined to comment on the ACLU lawsuit, she said.

Mitchell said she could not speak with New Times by deadline but has emphasized that her focus on gun violence prompted the new policies. "I do not want to see Maricopa County become another Chicago," she told Mike Broomhead of KTAR News on Thursday.

The homicide rate has increased slightly in Maricopa County since the pandemic, rising from an average of about seven homicides per 100,000 people before the pandemic to now around eight, according to data from the Maricopa County Office of the Medical Examiner. In 2021, 77 percent of homicides had a firearm as the manner of death, the highest rate in the last six years.

This increase in homicides is in line with national trends. Murders — and gun deaths, specifically — have increased in cities across the country over the last decade, generally regardless of whether city leadership is liberal or conservative. Researchers have cautioned not to attribute the rise to any specific prosecutorial or law enforcement policies.

Gunnigle, long a harsh critic of the county attorney's office, faces Mitchell in November. She also ran for the seat in 2020, and lost narrowly to Adel. Mitchell, a Republican, won the GOP nomination easily in August.

Mitchell has touted her efforts to improve the county attorney's office, which for the past two years has been mired in scandal over bogus prosecutions of Black Lives Matter demonstrators and serious case backlogs.
KEEP PHOENIX NEW TIMES FREE... Since we started Phoenix New Times, it has been defined as the free, independent voice of Phoenix, and we'd like to keep it that way. With local media under siege, it's more important than ever for us to rally support behind funding our local journalism. You can help by participating in our "I Support" program, allowing us to keep offering readers access to our incisive coverage of local news, food and culture with no paywalls.
Make a one-time donation today for as little as $1.