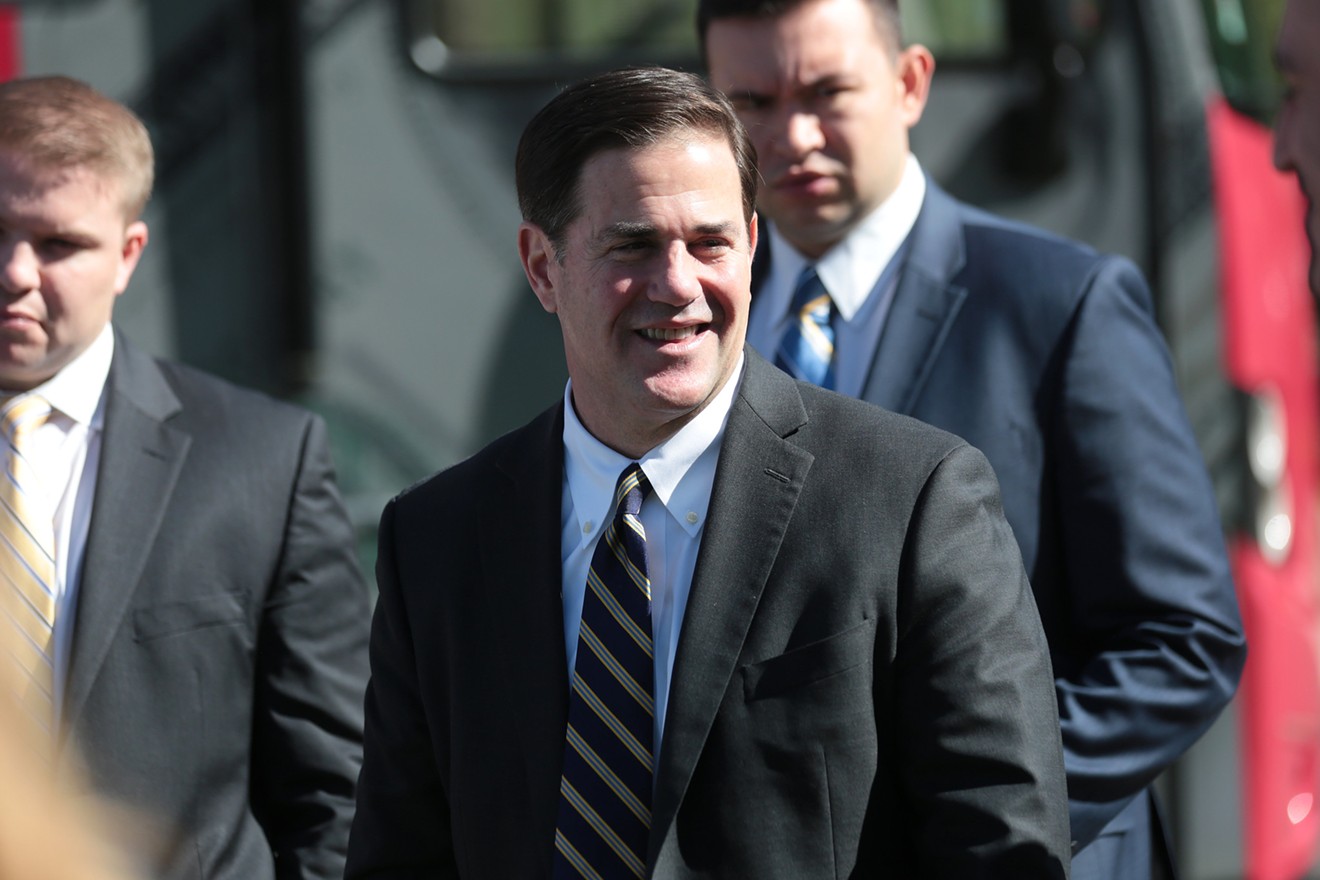 Arizona Governor Doug Ducey in 2017. Gage Skidmore via Flickr
When a position opened recently on a statewide board that holds great sway over redistricting in Arizona, Todd Francis was eager to apply.

Francis, an active Democrat, grew up in Chinle, on the Navajo Nation. For years, he has worked for organizations in the Valley that help first-time Native American homebuyers obtain mortgages, and he is currently the campaign manager for Democrat Debbie Nes-Manuel, who is running for the Arizona House of Representatives and comes from a Navajo clan.

“Somebody needs to be looking out for tribal representation,” Francis told Phoenix New Times, explaining his interest in the position on the Commission on Appellate Court Appointments. “I just want to make sure that there’s fair representation for these communities.”

But, as Francis and others who applied for the open seat in Maricopa County soon learned, their chances of being appointed were slim, if they had a shot at all, because even before some candidates had their interviews, the seat had already been filled.

The day that Francis interviewed, the Senate Judiciary Committee reconfirmed Republican Jonathan Paton, whom Governor Doug Ducey previously had appointed to the seat. Ducey's office maintains that it interviewed candidates for the already-taken Maricopa County seat in case a vacancy opens in the future.

These days, the composition of the Appellate Court Commission is particularly important. Typically, the 16-member board vets potential Appellate and Supreme Court judges. Next year, it will also review applications for the Independent Redistricting Commission, which redraws Arizona’s congressional and legislative districts once a decade, following the census.

With Arizona poised to gain one more seat in Congress, the contours of that map — and therefore, the people who decide them — will be key to Republicans’ maintaining a grip on political power, or to Democrats’ gaining ground. Which people will be in charge of redrawing those lines is a decision that lies with the appellate court commission.

They are supposed to be a healthy mix of people, according to the Arizona Constitution, which states that "the governor, the senate and the state bar shall endeavor to see that the commission reflects the diversity of Arizona's population."

Democrats have long alleged that Ducey is flouting the Constitution with his appointments and trying to stack the commission in Republicans' favor. The state Democratic party has pointed out that public members of the appellate court commission include one person of color, not one Democrat, and not a single person from a tribe.

Public members of the appellate court commission, which is supposed to reflect Arizona's diversity, include one person of color, not one Democrat, and not a single person from a tribe.

Here, 54 percent of residents identify as white, 32 percent as Hispanic, 5 percent American Indian, 5 percent black, and just under 4 percent Asian, according to the U.S. Census Bureau.

This January, four of the non-attorney seats, including one in Maricopa County, were scheduled to open up as the terms of previous appointees expired.

In the weeks leading up to Christmas, Ducey’s administration announced that applications for those seats would be due January 3. Despite the scant notice, the announcement was in keeping with constitutional requirements that a governor-appointed nominating committee, which vets applicants for the Appellate Court Commission, "provide public notice that a vacancy exists."

Francis, who said he had been encouraged to run by an official in the Democratic Party, caught wind of the tight deadline through Facebook. He managed to send in his resume and letters of recommendation on time.

He was vying, or he thought, for the open seat in Maricopa County, the only seat he was eligible for.

A few weeks later, Francis was called for an interview, and at 1 p.m. on February 13, he went to the Ninth Floor of the Executive Tower.

That too, was in keeping with the literal requirements of the Constitution, which says that the nominating committee "shall solicit, review, and forward to the governor all applications along with the committee's recommendations for appointment."

But that same day, the Senate Judiciary Committee confirmed Jonathan Paton, a Republican who had been appointed by Ducey in 2015, to the very seat representing Maricopa County that Francis was interviewing for, according to documents that a senior Democratic party official shared with New Times.

The panel of four interviewers spent about half an hour asking Francis what he took to be serious questions, like the qualifications of a good judge. But ultimately, he felt the process was “a sham.”

Going into the interview, he had heard that people had already been picked for positions on the commission, but he wasn’t quite sure what that meant. “I didn’t know if they’d been confirmed or not,” Francis said. He didn’t ask his interviewers whether the position he was interviewing for was, in fact, open.

Todd Francis
Todd Francis
The next day, while reading an article in the Arizona Capitol Times, he learned that Paton had already been reappointed to the seat.

When another Democrat, who spoke with New Times on the condition of anonymity, interviewed for the same position the same day as Francis, he did ask whether a vacancy existed.

“I said, ‘I’m a little bit confused because I thought I read somewhere or heard that you guys just renominated someone to the position, so is there an actual vacancy?’” that person told New Times.

Yes, there were vacancies, Anni Foster, the governor’s general counsel, said to him.

The applicant pressed Foster, wanting to know whether the Maricopa County seat was still open, and Foster told him no. “You’re correct that there is no vacancy because we just renominated somebody,” he recalled her saying.

“I went there in good faith,” the applicant said. “I felt like I was kind of used, and I didn’t enjoy that at all.”

That person applied to the appellate court commission specifically to have a say in who is appointed to the redistricting commission.

“I knew that this commission would be involved” in redistricting, he said. “I wanted to make sure that I at least had the chance to be part of that.”

But interviewing for a position that turned out not to exist felt like “a shell game,” that person said. He questioned whether Ducey’s administration was “just trying to check boxes and say, we did it,” or simply being sloppy.

Adhering to the Constitution

Patrick Ptak, a spokesperson for Ducey, said that the administration took the process of interviewing candidates seriously.

“We’re not interested in wasting our time or anyone else’s,” he told New Times.

According to Ptak, the administration took three days to interview eight people for the Maricopa County seat. They called those interviewees for the interview even though Paton had already been reappointed because “there’s the opportunity that vacancies could occur in the future,” either for the Commission on Appellate Court Appointments or other boards, he said.

If a spot did open up, then “these applications can still be valid for future vacancies,” Ptak said.

But the administration didn’t necessarily make clear to candidates that the position they thought they were interviewing for had already been filled. Only candidates who asked that question were told, Ptak said.

During the meeting, the minutes showed, Foster, Ducey's general counsel, issued at least two reminders of the legal requirements for appointing new members, including the fact that "all qualified candidates shall be sent to the Governor for review."

In response to specific questions about the board's lack of diversity, Ptak repeatedly defended the board and Ducey's appointments with the statement, “We adhere to the principles outlined in the Constitution.”

He also insisted, “The board does reflect the diversity of Arizona,” explaining that a recent round of appointments included a woman who was the first in her family to attend college, a female business owner, and a Latino mother.

Asked how there could be not a single person from a tribe, Ptak didn’t answer directly. Instead, he said, there were two more appointments for the administration to make; they just can’t be from Maricopa County.

In making those appointments, he promised, “we’ll continue to adhere to the principles outlined in the Constitution.”
KEEP PHOENIX NEW TIMES FREE... Since we started Phoenix New Times, it has been defined as the free, independent voice of Phoenix, and we'd like to keep it that way. With local media under siege, it's more important than ever for us to rally support behind funding our local journalism. You can help by participating in our "I Support" program, allowing us to keep offering readers access to our incisive coverage of local news, food and culture with no paywalls.
Make a one-time donation today for as little as $1.
Elizabeth Whitman was a staff writer for Phoenix New Times from March 2019 to April 2020.