Stephen Wamsley and Stefani Gombar-McMichael's Facebook posts. Facebook
"I say let's go back to the firing squad," wrote retired Phoenix police sergeant and Moon Valley High School teacher Stephen Wamsley on a Facebook post about a prisoner's execution. "Why don't we sell tickets and give the proceeds to the family??"

The reserve officer and high school "police science" instructor's glib remark suggesting that executions be turned into a bloody, profit-making spectacle was just one of his 18 posts included in a recently published database of offensive Facebook posts made by police officers nationwide.

The database includes 282 posts from 97 current and former Phoenix police officers, many of which refer to black people as "thugs," called for violence against protesters, denounced Muslims as rapists, and joked about refusing to help citizens who criticized the police.

On his faculty page for Moon Valley High School, a high school in north Phoenix with about 1,500 students, Wamsley describes himself as "the lead instructor for the Police Science class." The course aims to educate high school students "about the different types of careers in law enforcement" and help to "graduate good citizens."

Sergeant Stefani Gombar-McMichael and her husband, Sergeant Gary Gombar, both of whom work for Phoenix PD, have also shared questionable posts on Facebook. In August 2015, Wamsley shared a video of a car ramming into a man. Gary Gombar commented on the post with a photo of a bloodied truck with a mangled corpse stuck to the front captioned, "Just drove through Ferguson. Didn't see any problems." 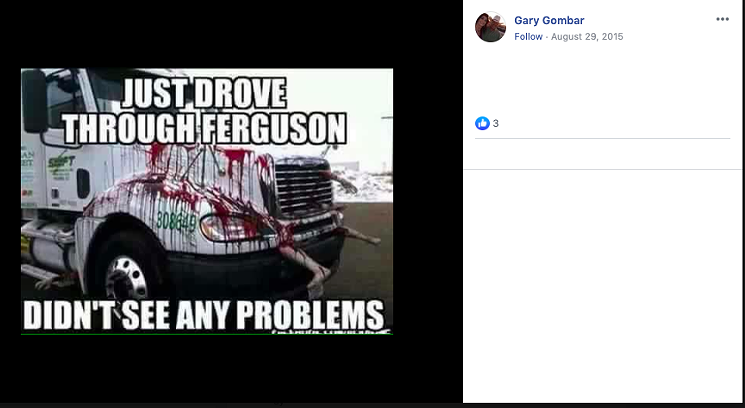 Gombar-McMichael's posts were not included in the database due to her privacy settings, but someone who is friends with Gombar on Facebook (and therefore has greater access to her account) shared screenshots of one of her posts with Phoenix New Times.

"Something to think about for those of you who put ALL officers in a pile," wrote Gombar-McMichael alongside a post of a 911 dispatcher refusing to help someone in an emergency because that person had once criticized the police. "Interesting read...guess I should protest!" she wrote in another post linking to a story (which isn't true or accurate) about "The Forgotten White Slaves."

Stefani Gombar-McMichael's Facebook posts.
Facebook
In another private post shared with New Times, Gary Gombar liked a status posted by a man named Tim Salts which stated: "Is it just me? Doesn't it seem TV advertising is pushing interracial relationships. I've noticed abundance of Black & White couples lately. Casio [sic] Gambling ads, Mattress ads showing couples in bed and now Erectile dysfunction ad showing a Black man standing at the alter [sic] with a White woman, really? Animals may be smarter after all. At least they mate with their own."

A status liked by Phoenix police sergeant Gary Gombar.
Facebook
Neither Moon Valley High School superintendent Brian Capistran nor the school's principal, Anat Salyer, responded to emails and phone calls from New Times about Wamsley and Gombar-McMichael's employment with the school, or whether the posts violate any social media guidelines for school employees.

Wamsley did not respond to an email sent to the address listed on his faculty page, nor did he respond to a text messages and a voicemail left on his cellphone.

Reached by email, both Gombar-McMichael and Gary Gombar said they were unable to comment because the Phoenix police department's media relations policy forbids officers from speaking with the media without the prior approval of the police chief. All of the screenshots in this story were shared with Wamsley, Gary Gombar, and Gombar-McMichael prior to publication; none disputed the authenticity of the screenshots.

Phoenix Police Chief Jeri Williams has said the department's Professional Standards Bureau is reviewing Facebook posts from the database for potential misconduct. Earlier this month, Williams said she has taken officers who made particularly egregious posts off of their "enforcement assignments" and placed them on desk duty, though she declined to specify which officers or how many.

A New Times investigation found four of the officers whose posts were included in the database had also been accused of killing people. Seven of the officers have been accused of seriously injuring people. Thirty-one of the 97 officers whose posts made the database had been named in lawsuits, mostly for excessive force, while eight were included in the Maricopa County Attorney's Brady list, a list of police officers who are so notoriously unreliable and dishonest that prosecutors must disclose the officer's reputation to defense lawyers.
KEEP PHOENIX NEW TIMES FREE... Since we started Phoenix New Times, it has been defined as the free, independent voice of Phoenix, and we'd like to keep it that way. With local media under siege, it's more important than ever for us to rally support behind funding our local journalism. You can help by participating in our "I Support" program, allowing us to keep offering readers access to our incisive coverage of local news, food and culture with no paywalls.
Make a one-time donation today for as little as $1.
Meg O'Connor was a staff writer for Phoenix New Times from April 2019 to April 2020.