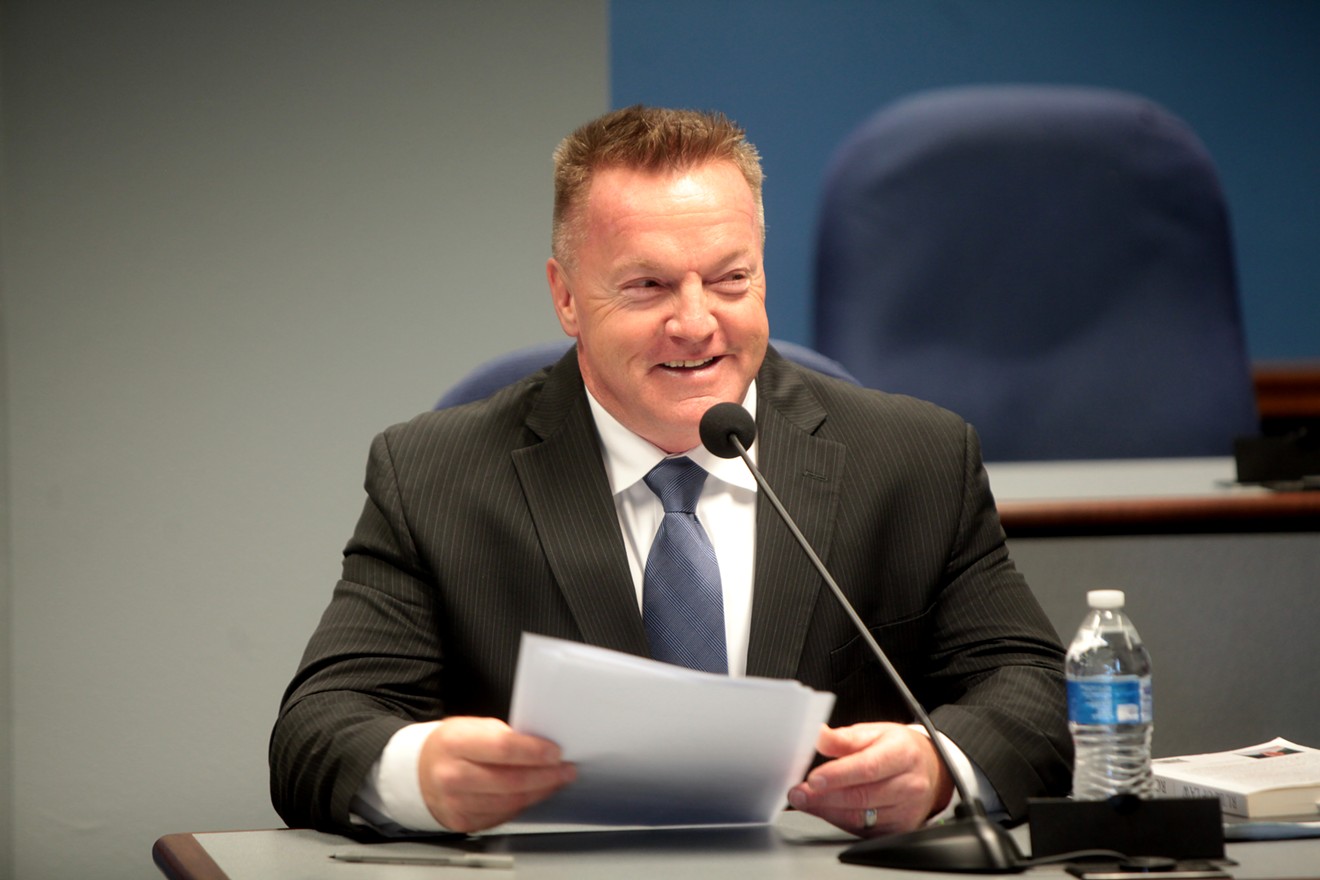 Now a third-term state legislator, Representative Kern saw an opportunity: He has worked behind the scenes on a bill that could remove law enforcement officials like him from the list.

At Kern's request, fellow Republican Representative John Kavanagh of Fountain Hills recently sponsored a bill to give officers the ability to appeal an agency's decision to add their names to the list.

Prosecutors and defense attorneys rely on the police misconduct database, known as the Brady list, to identify officers with documented credibility problems when an officer's testimony is relevant to a criminal case.

However, the scope of Kavanagh's bill was scaled back. On Monday, the House passed a version of the measure that only requires an agency to give officers seven days' notice before adding their names to the Brady list.

The incident that led to his termination from El Mirage and his inclusion on the Brady list is just one example of Kern failing to tell the truth. In fact, in recent years, Kern has misled the public and made inaccurate statements on financial disclosures about his law enforcement credentials.

Kern lives in Glendale and represents District 20, which encompasses parts of Glendale and northwest Phoenix. He works as a campus security officer for Grand Canyon University and as a private investigator, according to LinkedIn.

He was first elected in November 2014, shortly after the El Mirage Police Department fired him for misleading his sergeant, then re-elected in 2016 and 2018.

"[Y]ou failed to follow through on a financial obligation with the City and misled your supervisor when asked about the progress of the agreement."


In his work as an El Mirage code enforcement officer, Kern was not a certified peace officer under state law. Yet in three recent financial disclosure statements he's required to fill out as a lawmaker, Kern has identified himself as holding a "law enforcement" certification, in 2014, and holding Arizona peace officer certification, in 2015 and 2016, according to records from the Arizona Secretary of State's office.

Kern held no peace officer certification until January 2017, when he received certification by waiver from the Tombstone Marshal's Department, according to records of the Arizona Peace Officer Standards and Training (AZPOST) board.

Tombstone is located in southeast Arizona, nearly 200 miles from Glendale.

Kern's misleading statements on his financial disclosures are not the first time he has distorted his background. In 2015, Kern described himself as a "certified peace officer" during a caucus meeting while discussing a policing bill.

As the Arizona Capitol Times reported at the time, Kern's claim wasn't true – he did not hold peace officer certification.

Although he graduated from the Law Enforcement Training Academy of Glendale Community College, Kern did not earn a certification because he was not sponsored by a law enforcement agency. He even signed a form when he enrolled acknowledging that graduation from the academy does not confer AZPOST certification.

“I don’t want to be incorrect in what I’m saying. If I am not a certified officer, then I do want to tell the truth. My integrity means a lot,” Kern told the Capitol Times.

So-called Brady lists take their name from a 1963 Supreme Court decision, Brady v Maryland, in which the court ruled prosecutors must disclose evidence relevant to the defendant's guilt or innocence, or to the credibility of a witness. Brady lists like the one maintained by the county attorney's office serve as a record of police officers, corrections officers, and sheriff's deputies who have committed misconduct or lied.

According to a notice of termination, Kern lost a city tablet computer worth $659, and he was supposed to reimburse the city for it by paying $25 each month. Instead, he paid $25 total. When his supervisor, Sergeant Craig Cormier, asked about the status of the repayment plan, Kern told him he was "taking care of the financial obligation," when he was not.

El Mirage Police Chief Steven W. Campbell fired Kern on August 14, 2014, one day after a disciplinary hearing and two months after Kern was placed on paid administrative leave, according to the records.

“While you take responsibility for your actions which led to the investigation of these events, it does not mitigate the fact that you failed to follow through on a financial obligation with the City and misled your supervisor when asked about the progress of the agreement," Campbell wrote to Kern.

Several months after he was fired, Kern and the City of El Mirage signed a waiver and release agreement in which Kern agreed to drop an appeal of his termination and forego any future litigation against the city.

El Mirage agreed to waive the $454 Kern owed for the tablet, pay Kern a lump sum of $7,000, and describe his departure as a "voluntary resignation" when asked by the media or the public, according to the terms of the agreement.

In response to New Times, Kern would not answer specific questions about his financial disclosures and his firing. He only issued a brief statement through a spokesperson for the Arizona House Republican caucus.

"This was an infraction that occurred while I was a civilian employee and should have never risen to the level that it did," Kern said in the statement. "The fact that it resulted in my name being added to the law enforcement Rule 15 database without any context, prior notice, or practical method of appeal demonstrates that the system is badly in need of reform."

This legislative session, at Kern's request, Kavanagh, a former detective sergeant with the Port Authority of New York and New Jersey Police Department, sponsored a bill to create an avenue for officers to specifically appeal their inclusion on the Brady list to AZPOST.

"Rep. Kern asked me to run the bill," Kavanagh wrote in an email to New Times. "I agreed because it seemed like a good bill involving notification and due process rights. We only spoke briefly because I was familiar with the issue."

Kavanagh said Kern only brought up the fact that he is on the Brady list after New Times emailed asking for comment.

As drafted originally, HB 2671 would have given officers the opportunity to appeal to the AZPOST board when an agency places their name on the Brady list. Potentially more significant, the bill would limit the interpretation of what constitutes officer dishonesty during the appeal. The original language of the bill would have required a law enforcement agency to prove to AZPOST during a Brady list appeal that an officer's dishonesty was expressed in an official report or in a statement "relevant to the determination of a criminal defendant's guilt or punishment."

The language seems targeted to exclude incidents like the one that resulted in Kern's firing, seeing as his statement about the repayment plan was not relevant to a criminal investigation.

On February 25, the bill passed the House Appropriations Committee, where Kavanagh serves as the committee's vice-chair and Kern is a member. They both voted yes.

During the hearing, a lobbyist for the Arizona Conference of Police and Sheriffs (AZCOPS), Jack Lunsford, credited Kern for "reinvigorating this bill."

"It had been discussed several years ago," Lunsford said.

Kern did not speak on the bill at the committee hearing.

The same week, Kavanagh watered down the bill through a floor amendment that deleted language about appealing a decision to the AZPOST board. As he explained at the committee meeting, stakeholders were trying to work out reasonable language on due process, so Kavanagh decided to strike the language about an appeal for the moment.

The latest iteration of the bill only says that an agency must notify an officer in writing at least seven days before their name is placed on a Brady list. The House approved the bill on Monday in a nearly unanimous vote.

The purpose of the amended measure is simply to provide a consistent seven-day notification deadline across all Arizona jurisdictions, Lunsford told New Times. He said an official with AZCOPS had discussed the bill with Kern before Kavanagh decided to sponsor the measure, but he was unaware that Kern is on the Brady list, he said.

“I heard a rumor last week that he might be," Lunsford said. "That’s the extent of my knowledge.”

When Representative Diego Rodriguez, a Democrat from District 27, saw the original language of the HB 2671, he immediately opposed the measure. He says he did not know about Kern's presence on the Brady list until recently.

A local attorney, Rodriguez said the bill makes many incorrect assumptions about how law enforcement misconduct is handled. "We do not have an issue with this," Rodriguez said. "Officers are provided due process under the current system that we have."

The fundamental problem with the bill, Rodriguez said, is the measure misinterprets the process for judging a law enforcement official accused of dishonesty. Officers in Arizona are already provided due process and can appeal disciplinary action taken by their agency or jurisdiction, he said. If they are unhappy with the decision, they can even file a lawsuit and take up the matter through the courts.

By interfering with Arizona's Brady list disclosure requirement, Kavanagh's bill would damage the integrity of the justice system, Rodriguez said.

"Our current system in Arizona works," Rodriguez said. "That bill is looking to cloud the issues and to add a layer of confusion to where one is not necessary and not needed."
KEEP PHOENIX NEW TIMES FREE... Since we started Phoenix New Times, it has been defined as the free, independent voice of Phoenix, and we'd like to keep it that way. With local media under siege, it's more important than ever for us to rally support behind funding our local journalism. You can help by participating in our "I Support" program, allowing us to keep offering readers access to our incisive coverage of local news, food and culture with no paywalls.
Make a one-time donation today for as little as $1.