A selfie that Michael Phillips (right) took with a witness while responding to a traffic accident in Florence on January 23, 2020. Photo via AZPOST
Michael Phillips, a former officer with the Florence Police Department who resigned while he was being investigated for allegedly dealing meth, was arrested on Friday morning after a deputy reportedly found a large quantity of illegal drugs in his car.

Phoenix New Times previously reported allegations against the officer that included using and selling meth while on the job in early 2020. Last month, Florence police released an internal investigation report that said the claims were considered "credible."

The accusations include reports that Phillips traded sex for drugs and supplied a local drug dealer with meth. Phillips resigned from his post in March 2020 before the probe could be completed, prompting Florence Police Chief Bruce Walls to close the investigation. The Pinal County Attorney's Office said it  never received a case referral from the Florence Police Department regarding Phillips and, as a result, no charges were filed against him at the time.

Walls has refused to discuss the case publicly.


Now, in the aftermath of New Times' exposure of the probe with articles in June and July, Phillips' arrest seems to show that the previous allegations had merit. 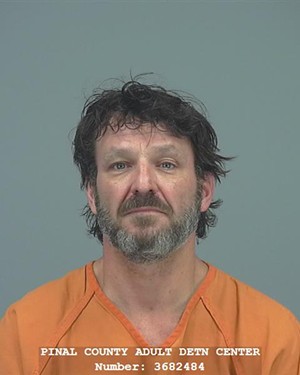 Michael Phillips' July 30 mugshot.
Pinal County Sheriff's Office
At around 1 a.m. on the morning of July 30, a Pinal County Sheriff's Office deputy pulled over a car driven by Phillips at an intersection in San Tan Valley for "observed traffic violations," according to court records. Phillips and the individual in the passenger seat, Kash Eslick both "displayed nervous behavior, were shaking, and had inconsistent stories about their travels," the records state.

The deputy "removed" Phillips from the car and found a firearm and a "small plastic baggie" inside the vehicle that appeared "indicative of drug use." A search of Eslick turned up a baggie containing "crystalline shards," which a field test later identified as methamphetamine.

The deputy then searched the rest of the car and found a black camera bag under the passenger seat containing "approximately 45 grams of Methamphetamine," around 90 pills that the officer "suspected to be Fentanyl," a baggie holding "suspected heroin," a digital scale, and numerous empty small baggies. Phillips' keys were also found inside the same camera bag. Other unspecific "drug paraphernalia" that was "indicative of active drug use" was found inside the car's center console.

Phillips was arrested on a litany of felony charges, including drug possession, drug possession for sale, and possession of drug paraphernalia. Both Phillips and Eslick were booked into the Pinal County Jail.

Lauren Reimer, a spokesperson for the Pinal County Sheriff's Office, said that the arresting deputy noted in his incident report that Phillips mentioned to him that he is a "former Florence police officer."

As New Times detailed, the administrative probe into Phillips' alleged drug dealing kicked off after someone reported that the officer had acted intoxicated while responding to a traffic collision in January 2020.

The Florence Police Department had also received reports that Phillips had given a man named Tony Scollick meth in July 2019 after pulling him over, and that he had traded drugs for sex with a past girlfriend of Scollick's. During an interview at the Pinal County Jail, Scollick claimed that Phillips "befriended him" some time ago. He also alleged that, on one occasion, Phillips drove him to his house in San Tan Valley where he saw Phillips and his wife consuming meth and inhaling nitrous oxide "whippets."

Before becoming a police officer, Phillips worked as a manager at a McDonald's franchise for over 17 years. Less than a year after getting hired by the Surprise Police Department in 2010, Phillips was arrested by his own department after colliding with another motorist while inebriated on some unidentified depressant.

He was hired in 2013 by the Florence Police Department, where colleagues became suspicious that he was showing up to work high. However, the police chief at the time, Dan Hughes, allegedly rebuffed complaints from other officers about his conduct.

But based on what he has heard about the case, he added, his office will likely try to obtain a grand jury indictment against Phillips.

"I think it’s a pretty simple, straightforward case," Volkmer said. "Based on the preliminary reports received, it is likely that the office will pursue criminal charges."

Chief Walls did not respond to a request for comment. Benjamin Bitter, a spokesperson for the Town of Florence, wrote in an email that the "Town has no further comment."
KEEP PHOENIX NEW TIMES FREE... Since we started Phoenix New Times, it has been defined as the free, independent voice of Phoenix, and we'd like to keep it that way. With local media under siege, it's more important than ever for us to rally support behind funding our local journalism. You can help by participating in our "I Support" program, allowing us to keep offering readers access to our incisive coverage of local news, food and culture with no paywalls.
Make a one-time donation today for as little as $1.