Can a union drive stop the Gannett-GateHouse Frankenstein? Probably not, but it might be fun to watch 'em try. A. Duarte/Flickr 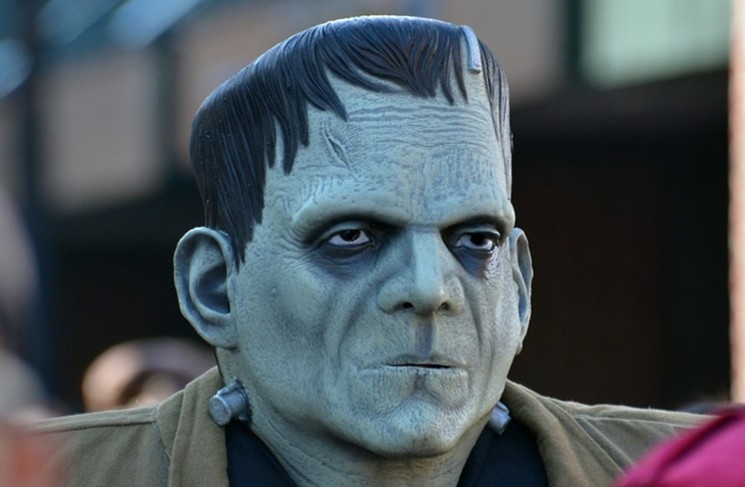 Can a union drive stop the Gannett-GateHouse Frankenstein? Probably not, but it might be fun to watch 'em try.
A. Duarte/Flickr
Update, Monday, August 5: Gatehouse Media and Gannett officially announced their merger, with Gatehouse acquiring control of the new company, which will be called Gannett.

As yet another rapacious hedge fund considers devouring the Arizona Republic's corporate parent, Gannett, the Rep's journalists, or at least some of them, may be considering the benefits of organized labor.

One day after a Wall Street Journal article reported that Gannett, the No. 1 newspaper conglomerate in the country, was close to a merger with the No. 2 newsprint empire, GateHouse Media, Matthew Benson, a former Republic reporter-turned-PR consultant, chimed in with a curious tweet. He suggested that the Rep's scribes may soon be doing their own live re-enactment of the classic pro-union film Norma Rae.

"The biggest untold story in Arizona media?" Benson teased. "A concerted, behind-the-scenes push by [Republic] staff to unionize the state's newspaper of record. Supporters seek a vote by late summer/fall. The newsroom is divided on the effort, which comes amid merger talks & rumored layoffs."

Talk about a potential bombshell. Arizona, despite the recent Red for Ed movement, is a notoriously anti-labor, right-to-work state. And the Republic itself was run for decades by conservative newspaper magnate Eugene C. Pulliam, who was quoted once that the two things he despised most were "taxes and unions."

Fortunately, Pulliam, a great believer in the power of a free press, didn't live to see the Republic gobbled up in 2000 by the sterile bean-counters at Gannett, whose short-term corporate greed and lack of vision are emblematic of why the Fourth Estate flounders in its own obsolescence these days.

Having recently fought off a takeover bid by media bottom-feeder Digital First Media, Gannett's proposed merger with the hedge-fund-staked GateHouse would lead almost inevitably to yet more belt-tightening and redundancies to the point of absurdity.

As a result, Pulliam's ghost might applaud from the grave any newsroom rebellion, whether or not it staves off a bloodletting.

Look for the Union Label

Benson declined to comment on his July 19 tweet, but my sources have indicated that his assertion is generally correct, and that there has been a move among some in the newsroom to sign up as many prospective union members as possible in order to trigger a vote among the Rep's employees under the National Labor Relations Act.

According to the folks I've communicated with — none of whom wish to be quoted, natch — the union drive was organized by younger Republic employees. My sources also say the newsroom is indeed split between those who think the newspaper industry is a goner with or without union representation and those who see a union as the only thing standing between them and a gig delivering vittles for GrubHub.

All this said, I have not spoken with anyone directly involved in this organizing effort, nor have my calls and emails to Gannett and GateHouse's corporate offices, and to the Republic's executive editor, Greg Burton, been answered. But were the Rep's newsroom to organize, it would join a wave of newsrooms unionizing in both digital and legacy media over the last few years. Those include news sites such as Vice, Vox, and BuzzFeed, as well as older outlets such as the New Yorker magazine, the Chicago Tribune, and the Hartford Courant.

In 2018, the news staff at the Los Angeles Times voted overwhelmingly to form the LA Times Guild, which is part of the DC-based NewsGuild-Communications Workers of America. A spring 2019 article in the industry watchdog, Nieman Reports, saw the unionization trend as a reaction to the news business' volatility. The article credited the successful union campaign at the Los Angeles Times with forcing its owner at the time, the much-hated media company Tronc (now rebranded as Tribune Publishing), to sell the paper that same year to a billionaire physician, Dr. Patrick Soon-Shiong.

One of the leaders of that effort, LA Times Guild co-chair Carolina Miranda, told me that she believes the nearly 400 staff members at the paper are better off with the union, even though the guild is still negotiating a contract with the paper's new ownership. She said journalists can no longer be fired without cause and that the union has secured an extended pregnancy leave for employees.

"We're working right now on negotiating severance in the event of layoff or buyouts," she said. "You know, all the protections that the LA Times did not have before for its journalists."

She conceded that management can still lay people off if it wants. In one infamous example, when the digital media outlets DNAinfo and Gothamist voted to unionize in 2017, their billionaire owner, Joe Ricketts, closed down both sites, canning 115 employees in one fell swoop.

There Will Be Blood

Experts say that if the Gannett-GateHouse deal goes through, carnage is guaranteed. Industry analyst Ken Doctor, writing for the Nieman Journalism Lab's website, which like Nieman Reports is part of the Nieman Foundation at Harvard University, observes that the merged company would include "265 dailies with a combined daily print circulation of about 8.7 million," giving it ownership of one out of six daily papers in the country.

"This isn't about building a digital news juggernaut ready and eager to blaze a new chapter in American journalism," Doctor warns.

Rather, it will buy the resulting media Goliath "two or three years" until the top dogs at the company "figure it out," meaning how to make profitable newsprint's transition to digital.

Part of making the new company profitable will involve cutting. The only paper that GateHouse owns locally is the Arizona Capitol Times, a niche publication that focuses on the Legislature and state government for a narrow audience of lobbyists, politicians, and assorted insiders.

Certainly, there is some overlap in content between the Cap Times, as it's often referred to, and the Republic. But as the Cap Times' former editor Jim Small pointed out to me recently, the publication has "premium subscription products," which some readers pay a bundle for, like its gossipy-wonky newsletter, the Yellow Sheet.

Still, why couldn't those things just be absorbed locally by the Republic? Small, who is now the editor of a digital news startup, the nonprofit Arizona Mirror, said that he believes the two entities could continue to coexist and compete. Although, I would argue that stifling competition is what media mergers are all about.

As for the idea from some quarters that a GateHouse-Gannett merger might be a short-term fix for the industry, Small was dismissive of the idea that bigger is better.

Dylan Smith, founder of a scrappy, independent news site, the Tucson Sentinel, was equally skeptical that a Gannett-Gatehouse Frankenstein monster will "figure it out," as Doctor claims.

"These companies don't care about making it work for the long run," he said. "They care about what the stock price is today, what the quarterly report looks like, how much profit they're able to ship away to their hedge fund. ... And what the bonus is going to be for every third vice president of dithering."

So true. Would a union change things? Smith doesn't think it will offer much of a speed bump to the private-equity-bankrolled GateHouse, which reportedly will be in charge if a merger is inked.

Moreover, both GateHouse and Gannett have union shops in their chains already. One more won't kill 'em.

"I wouldn't say don't do it," Smith said. "It's not going to hurt anything as far as the staff goes. I just don't know how much good will go with it."

I find myself in the same camp. I can't say that a union has ever given me a job. In fact, quite the opposite.

But if the prospect of one gives corporate behemoths like Gannett and Gatehouse heartburn, and if the Rep's young Turks have the stones to make it happen, I'll have my popcorn buttered, ready to watch the fight.
KEEP PHOENIX NEW TIMES FREE... Since we started Phoenix New Times, it has been defined as the free, independent voice of Phoenix, and we'd like to keep it that way. With local media under siege, it's more important than ever for us to rally support behind funding our local journalism. You can help by participating in our "I Support" program, allowing us to keep offering readers access to our incisive coverage of local news, food and culture with no paywalls.
Make a one-time donation today for as little as $1.