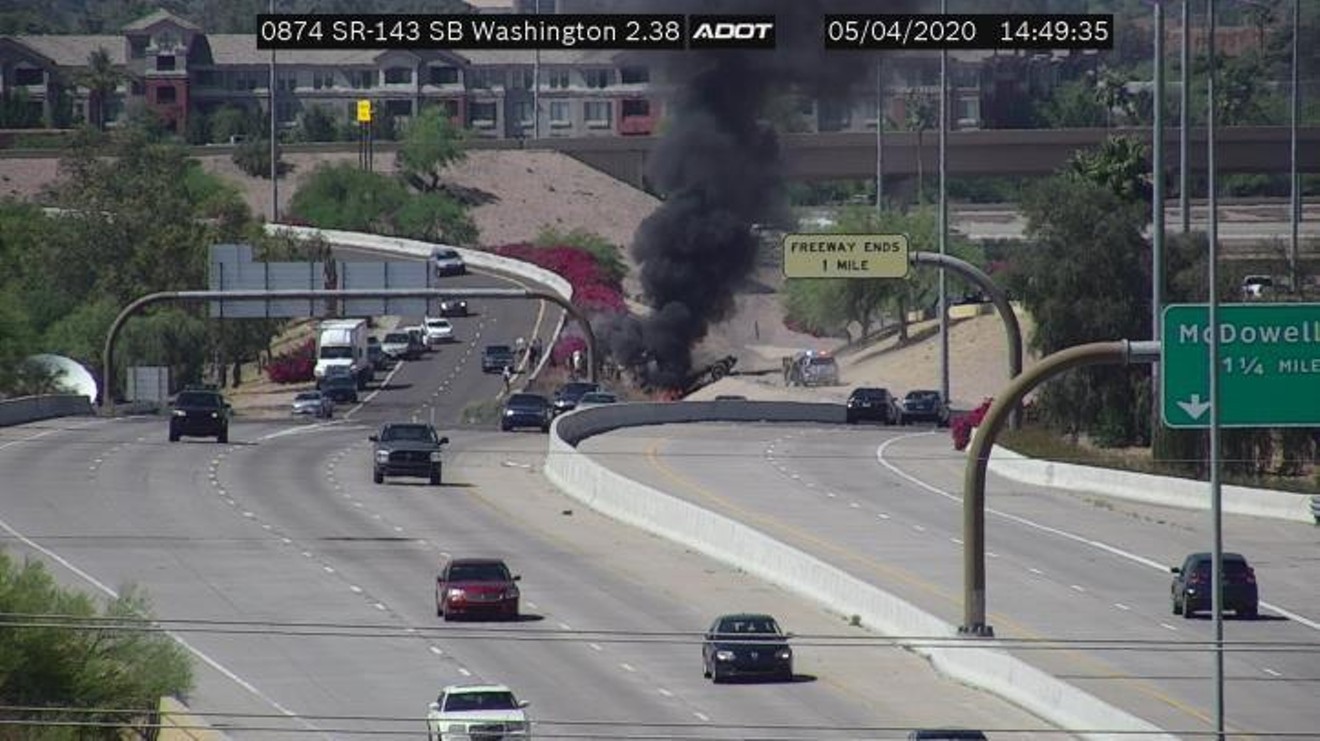 A Garda armored vehicle burns after rolling over on the Loop 202 freeway on Monday. A passenger died in the crash, which is under investigation. ADOT
The fiery rollover crash of a Garda armored truck in Phoenix this week that killed a passenger comes two months after a lengthy investigation by a Florida newspaper of previous crashes involving the international firm.

The cause of the latest crash, which occurred at about 2:45 p.m. on Monday on eastbound State Route 202, is under investigation by the state Department of Public Safety.

"For an unknown reason," the driver of the armored truck veered left off the road and through a concrete barrier, according to information provided by the DPS. "The armored vehicle continued down an embankment, rolled and came to rest on its top in a cement drainage ditch."

People on the scene helped the driver get out before the vehicle caught fire, DPS said.

DPS said the passenger in the rear compartment died from injuries from the rollover, while the driver remains in a hospital in serious condition.

Garda, which has offices in Phoenix and other states, as well as Dubai and several European countries, did not return messages seeking comment about the crash.

Bethany Barnes and Connie Humburg of the Tampa Bay Times reported on March 1 that at least 19 people — mostly pedestrians or motorists in other vehicles — have been killed in crashes with Garda vehicles since 2008, including three in the past year.

One of the cases the Times cited was a July 2014 Phoenix crash in which a Garda driver distracted from a phone call flipped his truck, causing it to land on a pickup truck. The armored truck driver was cited in that case, says an Arizona Republic story about the crash.

The Times' article states that it is based on "thousands of pages of court records, police reports, government inspections, internal company documents and photos and videos taken by workers," plus interviews with 90 current and former Garda employees. The paper claims "Garda took shortcuts that put unsafe trucks and error-prone drivers on the road."

In responses published by the Times, Garda said the paper's findings were "false and baseless," and it released several statements pushing back on the claims.

"To compare our business today to what is was when we started consolidating the market in 2008 is false and misleading," states a December 13 letter from the GardaWorld Communications Team. "Over the last three years, we have invested over $200 million in our fleet, including the purchase of over 550 new armored vehicles, with an additional 160 new armored trucks to be delivered in 2020."
KEEP PHOENIX NEW TIMES FREE... Since we started Phoenix New Times, it has been defined as the free, independent voice of Phoenix, and we'd like to keep it that way. With local media under siege, it's more important than ever for us to rally support behind funding our local journalism. You can help by participating in our "I Support" program, allowing us to keep offering readers access to our incisive coverage of local news, food and culture with no paywalls.
Make a one-time donation today for as little as $1.