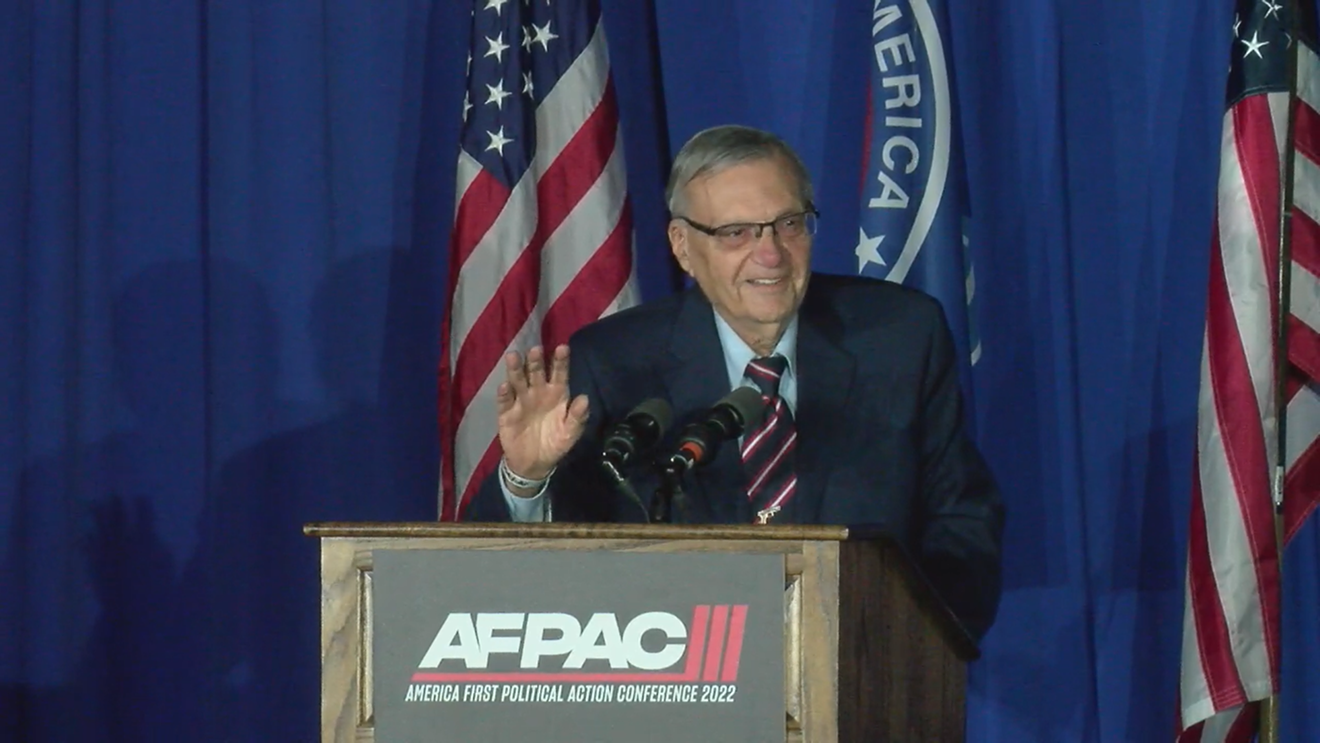 The 89-year-old former Maricopa County Sheriff Joe Arpaio gave a 40-minute speech to supporters recently. YouTube
When Joe Arpaio took the stage at the America First Political Action Conference in Orlando, Florida, on Friday, he told the crowd that he was often called the "biggest racist in the country."

The crowd of hundreds erupted in applause and cheered loudly.

"What are you clapping for?" he asked the crowd. "That I am [the biggest racist] or that I'm not?"

He might have anticipated such a reaction at AFPAC, an annual conference founded by pundit Nick Fuentes, frequently described by news outlets as a white nationalist.

For the last three years, the conference has been a hub for extremists, white supremacists, and followers of Fuentes, who are often called "groypers." The word was first used online to refer to an iteration of "Pepe the Frog," an internet meme co-opted by the alt-right.

Now, Sheriff Joe is among their ranks.

Arpaio's tenure as Maricopa County Sheriff, which came to an end in 2016, was dogged by scandals, lawsuits, and accusations of police misconduct. He was ultimately convicted by a federal judge for contempt of court for neglecting a court order to stop his agency from racially profiling Latinos. But Arpaio was pardoned by then-president Donald Trump.

He admitted as much on Friday, telling the crowd that "maybe I did racially profile."

Once again, the crowd, many of them young men in suits, cheered at the news.

Fuentes founded AFPAC as a rival of the less extreme Conservative Political Action Conference, a major annual event for conservatives. CPAC was also held in Orlando this weekend — and some of its speakers, including Greene, also attended AFPAC.

Fuentes built his initial platform through his robust political commentary on YouTube.

Eventually, the site banned him, but Fuentes has continued to live stream on more obscure platforms to build up his following.

Fuentes and his supporters hold views that are so extreme they have been ostracized by others in the conservative movement.

Fuentes, for instance, has feuded with Charlie Kirk, the founder of Turning Point USA, a conservative youth organizing group. Activists associated with Fuentes have been banned from Turning Point's conferences, despite the organization's own staunch right-wing political campaigning.

It's not hard to see why: Fuentes has praised Hitler and advocated for the racist "white replacement" conspiracy theory, which suggests that there is a global plot to eliminate white people.

Fuentes led a cheer of "Putin! Putin!" in his opening remarks at the Orlando conference, lauding Russian leader Vladimir Putin, who launched an unprovoked war against Ukraine days earlier.

None of this deterred Arpaio from attending. But several times during his speech, Arpaio walked back some of his more virulent statements after the comments drew roaring applause from the crowd.

At one point, he brought up a "machine gun" that he had imported from Belgium.

"Everybody said, 'what are you using this for?'" Arpaio said. "I said, 'to shoot people that come across the border.'"

The crowd again cheered in approval.

Arpaio later clarified: "I'm saying the illegals that are terrorists and other violent criminals. If they start shooting at my people, I'm going to fire back."

This drew a more muted reaction.

Later on, the former 24-year sheriff once again revisited race, telling the crowd that he had a grandchild of Mexican descent. When he said this, the audience booed.

Currently, Arpaio is running for mayor of Fountain Hills, a wealthy town of about 25,000 northeast of Phoenix. He did not mention this campaign, but he did rehash some of his cruel stunts during his tenure as sheriff: Tent city, pink underwear for inmates, and disproved accusations that former President Barack Obama's birth certificate was forged.

Arpaio told New Times that Michelle Malkin — a conservative pundit and Newsmax anchor who has been involved with AFPAC since its inception — had invited him to speak at the conference. He had not been paid for the speech, he said. He had already been planning to be in Orlando for CPAC that weekend, selling his book.

He claimed that he did not know much about AFPAC's background and primarily agreed because he was told the audience would be largely young people. "Most of them were young and patriotic and want to do something for our country. So I did it," he said.

He emphasized again that his comments about shooting immigrants were about "terrorists." "If they're going to shoot my deputies, I'm going to be well-armed," he said.

When asked whether it concerned him that the crowd had cheered after he said he was planning to "shoot people coming across the border," he said: "No. A lot of them have their own opinions. But I didn't take it to heart. I mean, if they clapped, they clapped."

The former sheriff was just one of several of Arizona's far-right icons who made appearances at the far-right conference.

Arizona Congressman Paul Gosar, who made headlines last year when he became the first sitting U.S. congressperson to speak at the conference, had a pre-recorded video message played to attendees.

This year, Gosar's message was brief: "I wish all of you a great conference," he said. He then chided "Big Tech, oligarchs, and the communists running the Democratic Party" saying that they had "created a very dark time" and ended the video.

His appearance drew reproach from Liz Cheney, the Republican U.S. representative for Wyoming. "As Rep Marjorie Taylor Greene and Rep Paul Gosar speak at this white supremacist, anti-Semitic, pro-Putin event, silence by Republican Party leaders is deafening and enabling," she tweeted on Saturday.

An emphatic election denier, Rogers has built a national audience for herself as a state lawmaker and raised millions in campaign donations as a result. Her own pre-recorded speech was met with fervor by attendees who relished rehashing the usual tropes and conspiracy theories.

Rogers called Fuentes "the most persecuted man in America" and praised his supporters.

"Please keep doing what you are doing," she said.

The far-right Arizona lawmaker went on a screed about how the state needs to prioritize "more gallows" so any of her enemies could be hanged.

"If we try some of these high-level criminals, convict them, and use a newly built set of gallows, it’ll make an example of these traitors who’ve betrayed our country," she said.

Over the weekend, governor Doug Ducey came under fire by critics for continuing to defend Rogers despite her appearance at AFPAC. "She's still better than her opponent," he said when directly confronted with Rogers' ties to Fuentes and white nationalism..

Rogers did not return multiple inquiries from New Times, though she defended herself on Telegram on Sunday, writing: "Every time I get attacked for saying something I just want to say it more."
KEEP PHOENIX NEW TIMES FREE... Since we started Phoenix New Times, it has been defined as the free, independent voice of Phoenix, and we'd like to keep it that way. With local media under siege, it's more important than ever for us to rally support behind funding our local journalism. You can help by participating in our "I Support" program, allowing us to keep offering readers access to our incisive coverage of local news, food and culture with no paywalls.
Make a one-time donation today for as little as $1.