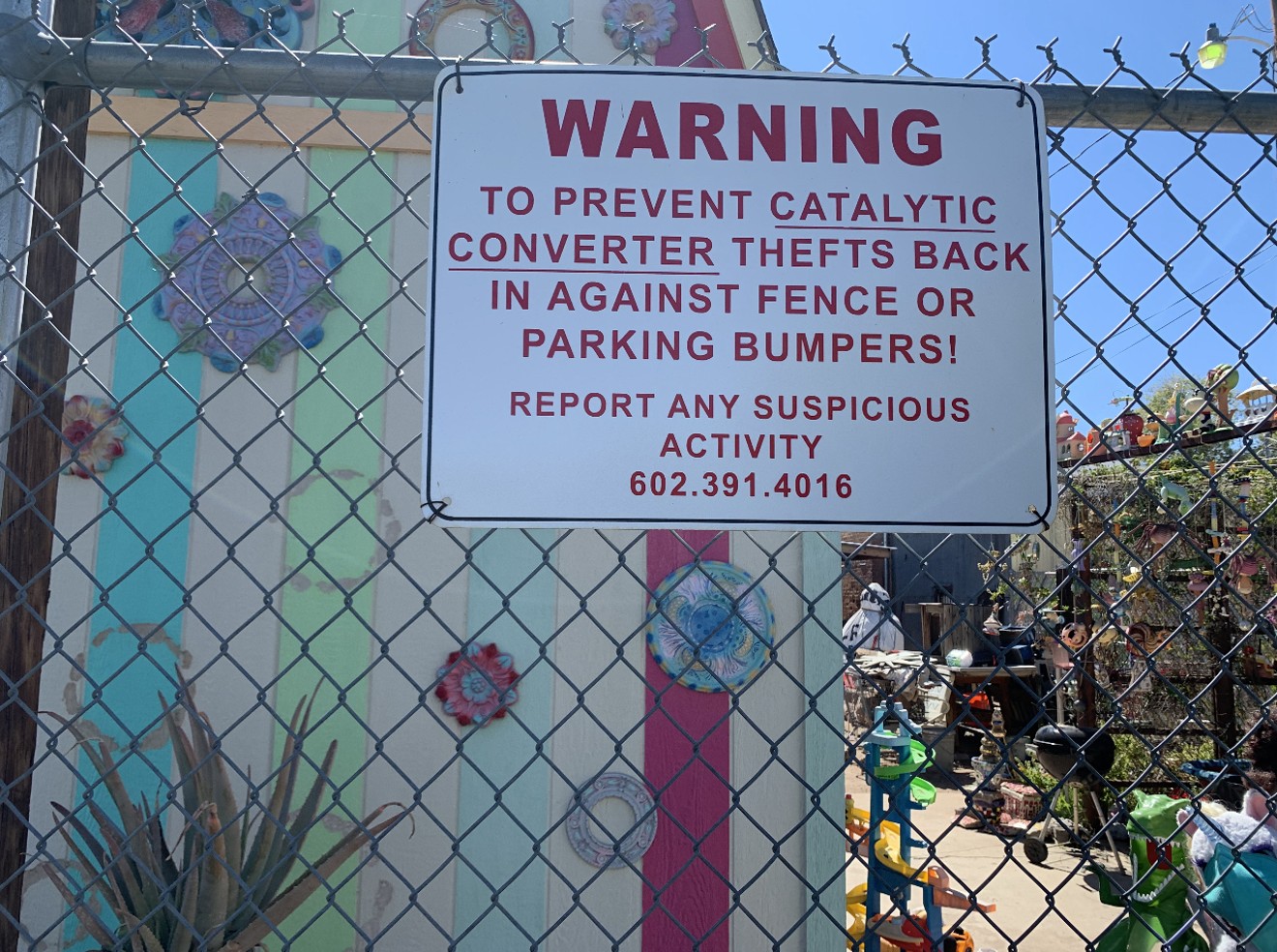 Gabriel Hernandez placed this sign warning customers about rampant catalytic converter theft in Phoenix in the parking lot of his business, Trans Am Cafe on Grand Avenue. Kristen Mosbrucker

Five months ago, Gabby Trujillo had never heard of a catalytic converter.

Now the mother of three children in Phoenix is on the hook to pay $1,000 for car repairs after the metallic device was wrenched from her vehicle while it sat in the family’s driveway in the Alhambra neighborhood.


The sun had barely risen to warm the otherwise cool Sonoran Desert sand in the early morning last week when Trujillo’s three sons shuffled into the kitchen to get ready for school. The sleepy-eyed family didn’t know they were becoming the latest victims of Phoenix’s growing property crime problem as coffee and juice splashed into cups on the kitchen counter.


But the automotive bandit in the North Phoenix neighborhood who targeted Trujillo and her family perhaps had already sipped a morning java.

Neighbors recounted that just before 6 a.m., a loud noise was heard and an unfamiliar man was running away with a large, tinny object.


Trujillo’s catalytic converter, the exhaust emission control device that’s required for vehicles to be road-ready in Arizona, was stolen from her Kia Sportage.


“It feels like I’ve been violated,” she said. “Someone was going through our family vehicle, touching the door handle my son uses.”

A catalytic converter is the exhaust emission control device that’s required for vehicles to be road-ready in Arizona and all other states nationwide.
State Farm

Over the years, Trujillo’s wallet and her son’s backpack for school have been stolen from the apartment that she has called home since 2017.

Her apartment is located just south of the 19th and West Dunlap avenues light rail train station, the last stop on the route. It's just east of Interstate 17, within walking distance of Washington Elementary School.

But Trujillo never expected a thief to rip valuable parts from her car’s chassis, she said. When it happened, she didn’t get a good enough look at the perpetrator to identify him when police arrived more than 90 minutes later.

Neighborhood leaders are aware of property crimes, and the city of Phoenix community crime map shows residents how they can report anonymous tips to catch bad actors.

“There’s crime in this area and we’re addressing it,” said Linda Colino, chairperson for the Augusta Avenue Block Watch.

“It’s a hotspot over there,” she said of the blocks nearby. “There is a lot of crime in that area and we’re trying to clean it up.”

Colino said she hasn’t noticed an uptick in catalytic converter theft but knows it’s becoming a bigger problem than ever in the city.

Data on catalytic converter theft from vehicles is not as straightforward to track using the method police show on the community crime map. Icons detail when vehicles are reported stolen but not necessarily theft of items inside or attached to vehicles, according to the map.

The city of Phoenix community crime map is a tool that helps residents report tips in an effort to solve crimes.
City of Phoenix

Phoenix police already have their hands full keeping up with the boom in property crime as the department wrestles with a personnel handicap.

The coronavirus pandemic has displaced numerous residents and impoverished many more while Phoenix is a hotspot for new inhabitants, particularly wealthier out-of-state transplants.


“It would be difficult to speculate if catalytic converter thefts are related to the amount of police officers on the street, however, we are 400 officers short,” Phoenix Police Sergeant Philip Krynsky said.


Detectives have not yet tracked down a suspect in Trujillo's case.

Her car insurer denied a claim to repair the damage because she only purchased liability coverage, not comprehensive vehicle damage, according to her policy.

As a result, she, like many others in the Valley, faced a repair bill of more than $1,000 to replace the vital device.


More catalytic converters are stolen in Arizona than in 41 other states, according to a report this week from State Farm, the largest auto insurance company nationwide.


California is the state where residents are most likely to have their catalytic converters stolen, the study concluded.


According to the insurance company, there has been a 12,771 percent increase in the number of claims it paid out in Arizona over the past three years.


State Farm paid less than $10,000 for just seven such cases in 2019 but doled out more than $1.4 million last year over nearly 1,000 claims, in Arizona. It was not immediately clear how many claims were submitted for Maricopa County or the city of Phoenix alone.


Driving without a catalytic converter isn’t just bad for the environment. It also produces a deafening cacophony of rumbling and grinding.


Without a functioning vehicle, one of Trujillo’s children missed school last week.


“We had some harder days because of that,” the 30-year-old mother said.

An emissions control device in most tailpipes has replaced copper as the primary target of property crime, according to the Maricopa County Attorney's Office. The metallic part is made of platinum and other precious metals.
Oak Ridge National Laboratory

Catalytic converter theft has exploded in Phoenix over the past two years, data shows.


The Phoenix Police Department investigated 72 reported cases of catalytic converter theft in 2020, almost four times as many as the 19 cases that were reported in 2019. Last year, the problem exploded with more than 4,700 cases reported.


“Catalytic converter thefts are occurring in various areas throughout the Valley and at all hours throughout the day,” Krynsky said. “We are asking the community to contact us whenever they have information leading to offenders that commit these types of crimes.”


The emissions device contains platinum, palladium, and rhodium, three of the most valuable precious metals. The elements are worth as much as $20,000 per ounce.


After pawning the precious metals, catalytic converters end up in a scrapyard, where they can be sold for up to $1,500.

It was not immediately clear if any junkyards in North Phoenix purchased stolen goods.


“Right now, copper theft is pretty much nonexistent,” Sullivan said. “It seems to have evolved into this catalytic converter theft.”


Criminals are taking advantage of the high market value in targeting these auto parts, Sullivan said. The attorney’s office has seen an increase in catalytic converter cases mirroring that of the Phoenix Police Department.


To get a conviction, prosecutors need “the whole package,” Sullivan said. Attorneys need a suspect, a car, and a victim willing to assist prosecutors in the case.


Victims like Trujillo are doing their best to help the justice system, but continue to wait for reparations.


“It was just so unexpected,” Trujillo said. “Everything about it sucks.”


Krynsky recommends Valley residents park their vehicles in well-lit and open areas and near a camera whenever possible. The sign in a parking lot near the intersection of Grand and Roosevelt avenues had some practical advice.

"TO PREVENT CATALYTIC CONVERTER THEFTS BACK IN AGAINST FENCE OR PARKING BUMPERS!" the sign in the Trans Am Cafe lot instructed.