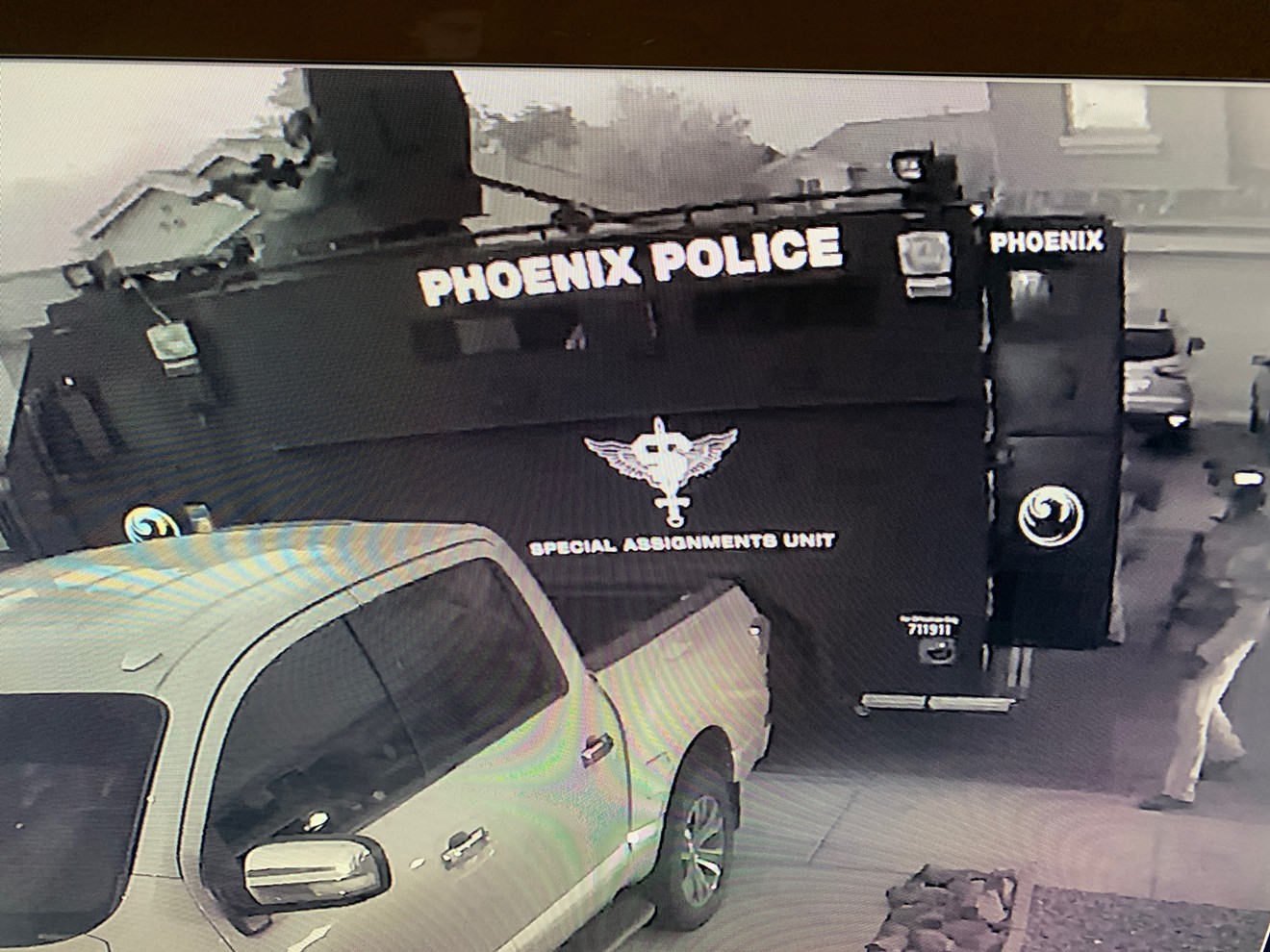 Photos from the June 10 raid. Jarrett Maupin
Just after 5 a.m. on June 10, about a dozen heavily armed Phoenix police officers from the Special Assignments Unit arrived at the home of Bejar Abdulaziz in southwest Phoenix. The family claims Phoenix police went after the wrong person in a botched raid, but police say Abdulaziz's arrest was years in the making.

Late Wednesday night, Jarrett Maupin, a polarizing local activist, sent out a press release and videos of the family's encounter with Phoenix police to members of the media. In response to questions from reporters, Phoenix police on Thursday released additional video of Abdulaziz taken by undercover officers. Moments before Maupin's press conference outside City Hall in downtown Phoenix, police sent out their own press release detailing Abdulaziz's alleged crimes. At the press conference, Abdulaziz and his family denied allegations that he had sold drugs at his market in Glendale.

Videos taken by surveillance cameras in the family's home begin as Abdulaziz, his partner, Gretel de la Fuente, and their two children, walk toward the front door with their hands raised in the air. An armored police vehicle is parked outside.

The video has no sound, and it's unclear what happened to make the family decide to walk toward the door. As the family walks out, they pass a remotely operated camera at the front door. Nine officers wearing tactical gear then walk into the house on Jones Avenue near South 75th Avenue. One officer walked in with a K-9.


The videos shared by the family end there, but police say once they were inside the house, they found a loaded AK-47 rifle, a loaded handgun, and cash. Police seized it all, along with the family's car.

At the press conference with Maupin, Abdulaziz said he never sold any drugs and that what the police are saying isn't true. But video shared by Phoenix police appears to show Abdulaziz at his market — called Azad Market, at 5060 West Bethany Home Road in Glendale — selling THC cartridges to an undercover officer. Abdulaziz, who is from Iraq, said he worked for the U.S. Army in Iraq from 1992 to 1996 before coming to the United States. He said he is permitted to own the firearms that were in his home.


Abdulaziz has questioned why he hasn't been charged with anything. Court records indicate Abdulaziz was released on his own recognizance after his arrest. However, just hours before, Phoenix police had considered Abdulaziz dangerous enough, because of the weapons he possessed, to send in the Special Assignments Unit.

According to Phoenix police spokesperson Sergeant Vince Lewis, this is because "the charges are being wrapped into the larger case along with USDA [United States Department of Agriculture] Office of the Inspector General, which will be submitted." Lewis said the investigation began after they received a tip that Abdulaziz's market was "involved in illegally purchasing EBT (Food Stamp) cards" back in 2017, sparking "a joint investigation involving the Drug Enforcement Bureau of the Phoenix Police Department, USDA Office of Inspector General, and the Arizona Department of Economic Security."

During the investigation, "EBT cards were traded for Spice and methamphetamine (both dangerous drugs), cocaine (a narcotic drug), and THC cartridges," Lewis said. Asked whether it was Abdulaziz himself who traded EBT cards for meth and cocaine, Lewis said "yes" and said it was not included on the booking form because "it's part of the larger investigation that will be submitted to the AG."

Phoenix police say the drug-related charges are being submitted to the Arizona Attorney General's Office as part of the larger joint investigation with the USDA.

As the family spoke outside City Hall, Abdulaziz and de la Fuente maintained they did not do anything wrong and police had unfairly targeted the wrong people. Abdulaziz's children, 8 and 15 years old, remained visibly traumatized by the raid. Both were in tears at the press conference.

"They’re making me terrorist and I am not a terrorist," Abdulaziz said. "Where is the investigation? They didn't charge me with anything, they dropped my case." Abdulaziz said his family was detained for hours and questioned without being read their Miranda rights.

Maupin said the family intends to file a multi-million dollar notice of claim against this city, which would be the latest in a string of seven-plus-figure notices of claim filed against the city by people associated with Maupin.

Phoenix police said they seized cash at Abdulaziz's house, but did not say how much. Abdulaziz's booking form says no cash was seized. Maupin accused police of "stealing $43,000 in cash" from the family. 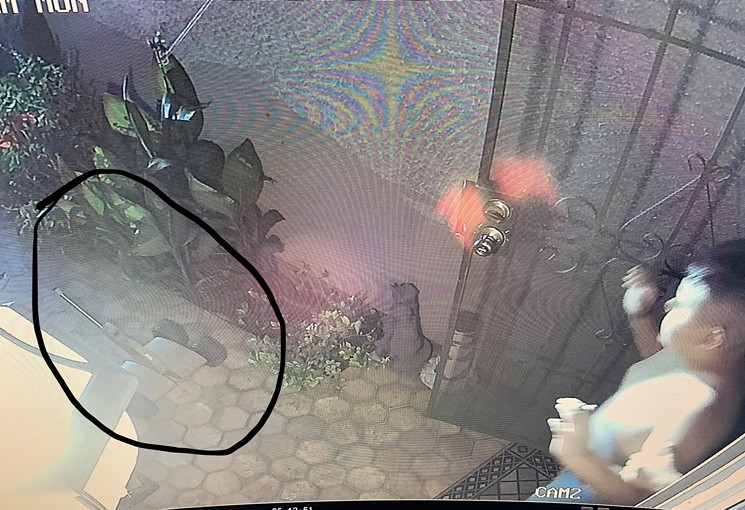 Photos from the June 10 raid.
Jarrett Maupin
click to enlarge 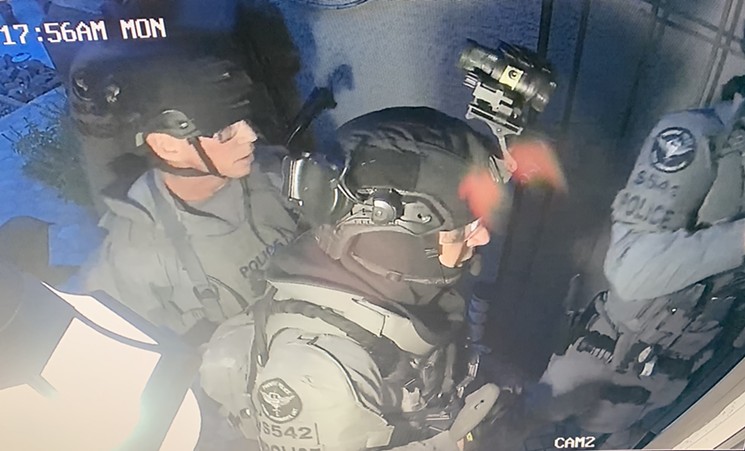 Photos from the June 10 raid.
Jarrett Maupin
KEEP PHOENIX NEW TIMES FREE... Since we started Phoenix New Times, it has been defined as the free, independent voice of Phoenix, and we'd like to keep it that way. With local media under siege, it's more important than ever for us to rally support behind funding our local journalism. You can help by participating in our "I Support" program, allowing us to keep offering readers access to our incisive coverage of local news, food and culture with no paywalls.
Make a one-time donation today for as little as $1.
Meg O'Connor was a staff writer for Phoenix New Times from April 2019 to April 2020.