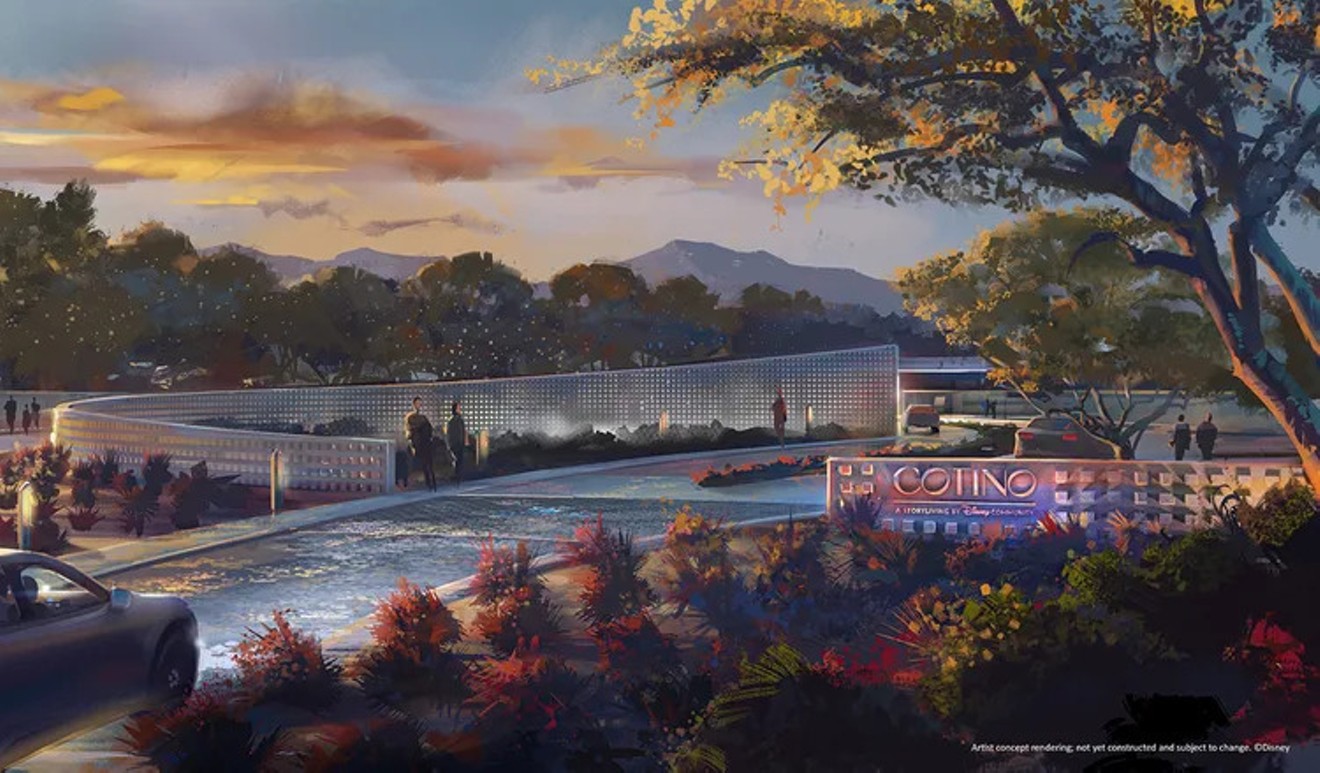 An artist rendering of Disney's "Storyliving" venture Disney
A local housing developer will build a sprawling 618-acre master-planned community in the middle of the California desert for Disney.

Complete with a shimmering new lagoon, the oasis will be Disney's newest fantasyland, in partnership with Scottsdale-based DMB Development. The iconic film and theme park empire is known for its wacky "perfect worlds" for tourists to escape.

This month, Disney revealed the new venture: Master-planned neighborhoods, as part of a project known as "Storyliving by Disney."

The first of these communities will be developed in Rancho Mirage, California, nearby Palm Springs, which has a long history of being a playground for celebrities, wealthy elites, and visitors.

The community would sit at the intersection of Bob Hope and Frank Sinatra drives, a nod to the old Hollywood celebrity hub.

With near picture-perfect weather for most of the year, the region's biggest downfall, just like Arizona, is that it does not have nearly enough water to go around. That reality makes the 24-acre blue lagoon gratuitous in the eyes of critics.

The media empire's founder, Walt Disney, previously owned vacation spots in the area such as a private club with "beach access" for its members, complete with a man-made beach, of course.

Called "Cotino," Disney promises to put 1,700 homes surrounded by "Disney hallmarks" into the Coachella Valley, with a community association operated by Disney cast members for flair.

California residents may wonder though whether such a project could have the same fate as the last time Hollywood descended upon the desert on the search for a slice of unspoiled paradise. Once upon a time, an inland body of water, known as the Salton Sea, was a hotspot for water sports and vacation homes decades ago.

These days, the community around the Salton Sea has been abandoned. Beaches are now eerie and desolate. Even those sandy banks are misleading, it's not sand at all but ground up animal bones, mostly birds.

The salty body of water has been shrinking in size over the years as the scorching desert sun evaporates the liquid into the air. As such, the sea floor is increasingly exposed.

And that's a problem because the sea floor contains concentrated toxins from decades of agricultural runoff and drainage patterns.

The perfect storm happens when the seasonal and strong Santa Ana winds blow the toxic dust into communities nearby, the site has been blamed for sickening Coachella Valley residents for generations. Locally, it's known as the "Coachella Cough." 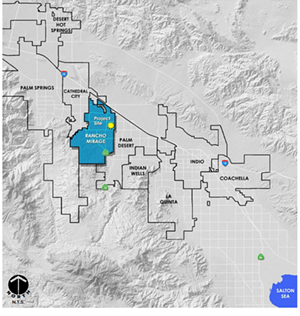 A map featuring where the neighborhood would be located includes proximity to the Salton Sea.
EC Rancho Mirage Holdings

Disney's website for the project has few specifics about what this foray into housing will entail. Instead, it is filled with stock photos of succulents and couples drinking wine. There are also some platitudes like: "Be a part of a vibrant, inspiring community catering to the unique desires of those who have learned what's really important."

It was not immediately clear how much the total value of the project might be but it would generate millions for the local municipality in taxes.

EC Rancho Mirage Holdings Limited Holdings is a Canadian private equity firm of investors who purchased the land alone in March 2018 for $75 million.

DMB Development has crafted high-end, exclusive neighborhoods around the Phoenix metro area, as well as in other states. The popularity of these luxury communities has, apparently, drawn Disney's attention.

"We're known for being the master planner for large communities in the West," said the developer's executive vice president, Mary Alexander. "So when [Disney] decided to have Cotino in Rancho Mirage, it was likely that they would choose someone like us."

DMB Development is responsible, for instance, for the gated Silverleaf neighborhood in the foothills of the McDowell Mountains in north Scottsdale. The neighborhood is billed as a "refined private enclave" that is "inspired by the country's most exclusive communities." It features gardens, a golf course, and opulent homes.

According to Zillow listings, prices for homes in DMB's most high-end neighborhoods range in the millions: One Silverleaf property has a price tag of $29 million, according to the site.

The company had been planning a new housing development in Rancho Mirage before it was approached by Disney, Alexander said.

According to local news reports, Disney did not tell local officials about its involvement in the project until the day before the company released the news to the public.

Rancho Mirage's mayor and business leaders have embraced the idea, calling it a "perfect fit" for the small city, but some neighbors are in opposition of the project. One letter to the local paper called the proposal a "water playground in a historic drought." The community has plans for a 24-acre blue lagoon.
EC Rancho Mirage Holdings

Alexander claimed that she had seen a mostly positive reception from neighbors. "We received great support from them, so we were very pleased," she said.

The "Storyliving" arm of Disney is a new project, but the company has developed residential communities before. Celebration, Florida, which was founded by Disney, is one example. The company has relinquished most official control over the town, but still manages its utilities and owns large swaths of land in the area.

Disney says that it is hoping to expand Storyliving to other parts of the country, but so far, it has been tight-lipped on the details.

A spokesperson didn't respond to queries about whether the project might come to Arizona.

Alexander, of DMB Development, did not respond directly to the question either.

The company did hope, she said, to continue to collaborate with Disney elsewhere.
KEEP PHOENIX NEW TIMES FREE... Since we started Phoenix New Times, it has been defined as the free, independent voice of Phoenix, and we'd like to keep it that way. With local media under siege, it's more important than ever for us to rally support behind funding our local journalism. You can help by participating in our "I Support" program, allowing us to keep offering readers access to our incisive coverage of local news, food and culture with no paywalls.
Make a one-time donation today for as little as $1.