Tempe Police Chief Sylvia Moir Joseph Flaherty
Shortly after the Tempe Police Department launched a "Positive Ticketing Campaign," 12 News, a local NBC affiliate, shared the news on Twitter, mischaracterizing the campaign and prompting many to criticize the department for something police now say they aren't doing and never intended to do.

"Tempe police are rewarding people for good driving behavior ... basically if you see a Tempe police officer pulling you over, it may not be a bad thing," said 12 News (KPNX-TV) reporter Colleen Sikora this morning. "If an officer sees someone following traffic laws correctly related to bicycles and pedestrians, they can pull you over but instead of citations you'll get a free drink coupon."

"Stop the outrage- a news outlet got it wrong!" Moir tweeted. "Tempe Police are NOT conducting traffic stops to give coupons to people. We never intended to stop and detain people for this purpose- come on man!"

Stop the outrage- a news outlet got it wrong! Tempe Police are NOT conducting traffic stops to give coupons to people. We never intended to stop and detain people for this purpose- come on man!

Tempe police have clarified that they are not stopping drivers, as 12 News previously reported.

"The purpose of the event is to positively engage with the public regarding laws pertaining to bicyclist, scooter, and pedestrian safety," Tempe Police said in a tweet after 12 News' broadcast sparked backlash. "During this campaign, Tempe Police will not be proactively stopping vehicles, bicycles, scooters or pedestrians."

Positive Ticketing Campaign: the purpose of the event is to positively engage with the public regarding laws pertaining to bicyclist, scooter and pedestrian safety. During this campaign, @TempePolice will not be proactively stopping vehicles, bicycles, scooters or pedestrians.


The 12 News broadcast inaccurately describing the "positive ticketing campaign" quickly went viral, igniting backlash on social media, where people pointed out that the campaign, as the news station described it, was unlawful and could easily lead to a dangerous encounter with confused, law-abiding drivers.

hi everyone it is actually not legal for a cop to pull you over for following the law https://t.co/uOVmTg5Pck

It is illegal for the police to stop you for driving legally. https://t.co/kB4lrOe5im

Wait two month and a police officer in one of these "happy stops" will shot and kill a black driver. https://t.co/hPL7sKcn05

This is a bad, bad idea. Unnecessary police-policed interactions should never be encouraged. What happens if they claim they notice the "odor of marijuana?" Or see something "in plain view?" Will they still give them this stupid coupon before illegally searching & arresting them? https://t.co/B9TnpzGMTN


Others made light of the situation.


"excuse me sir do you know why I pulled you over?"

Officer: I pulled you over today because you *followed* the law.

O: You will get a free drink at Circle K.

C: What about my Fourth Amendment rights?

O: I’m going to need you to step out of the car. pic.twitter.com/foeaVJUPr2


A number of other local and national news outlets ran with 12 News' incorrect story, spreading the false claim that Tempe police planned to pull over people who were following the law as some public relations stunt even further.

12 News updated their story hours later, quoting Tempe Police Detective Greg Bacon as saying, "We will be having positive conversations with citizens — say an officer happens to stop somewhere and see somebody, and says, 'Hey would you mind having a conversation with me?' (to) educate them on bicycle laws and traffic laws."

At that point, officers can hand people a coupon for a drink from Circle K, Bacon said. The campaign is a part of Tempe's "Vision Zero" initiative to drive down traffic fatalities. This is the second quarter Tempe police have carried out their questionably named "positive ticketing campaign," which apparently does not involve ticketing anybody.

Tempe police did not respond to requests from Phoenix New Times seeking clarification on how the campaign will be carried out, where officers are giving people Circle K gift cards, and how they determine who is deserving of a gift card. Tempe police also did not respond when asked how the misinformation originally spread. 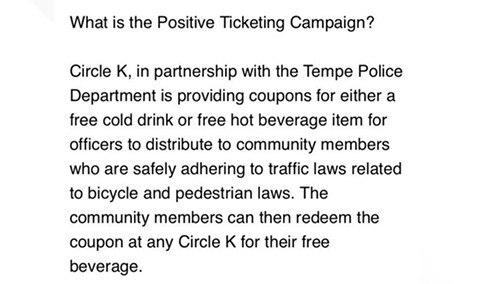 Press release from Tempe police describing the campaign.
12 News
Another Tempe officer told Fox 10 this morning, "We're not going out and actually stopping people. We're not going to pull people over. They're all consensual contacts ... We're doing bicycle and scooter safety so just making sure people are staying on the right-hand side of the road ... We want everyone to be safe. We're trying to reward some of that good behavior, so we're passing out those coupons."

"We're going to keep doing it as long as we have this partnership with Circle K going," the officer said.
KEEP PHOENIX NEW TIMES FREE... Since we started Phoenix New Times, it has been defined as the free, independent voice of Phoenix, and we'd like to keep it that way. With local media under siege, it's more important than ever for us to rally support behind funding our local journalism. You can help by participating in our "I Support" program, allowing us to keep offering readers access to our incisive coverage of local news, food and culture with no paywalls.
Make a one-time donation today for as little as $1.
Meg O'Connor was a staff writer for Phoenix New Times from April 2019 to April 2020.