Arizona State Prison Complex-Lewis, where Waylon Collingwood was incarcerated when he contracted MRSA, according to a lawsuit. Prison Insight via Flickr


In July 2019, a knot the size of a golf ball popped up on Waylon Collingwood's right thigh, and his entire leg swelled, the skin stretching like a balloon.

"If you ran your fingernail down my skin, it’d be like it would tear open," Collingwood said. He was nauseated and vomiting. Once, he woke up in the middle of the night with cold shivers, drenched in sweat. The illness felt like pneumonia, which he'd had before, only this time, his lungs didn't hurt.

A friend wheeled the 35-year-old, who is incarcerated at the Arizona state prison in Lewis, to the medical unit, where a nurse diagnosed him with pneumonia in both lungs. Collingwood remembered being given a Z-pack — pills for the antibiotic azithromycin, commonly used for pinkeye and strep throat — and sent back to his unit.

But the pneumonia diagnosis was wrong. It would take another month, more X-rays and blood tests, two more misdiagnoses, and finally, a trip to the hospital, to identify what was ailing Collingwood: a severe infection of methicillin-resistant staphylococcus aureus, or MRSA.

Collingwood is now suing Corizon, the for-profit prison company that, until July, was responsible for medical care in Arizona's state prisons. The case, which is also against six of Corizon's nurses, alleges negligence, medical malpractice, and the violation of Collingwood's civil rights.

By the time emergency room providers at Abrazo West Campus Hospital — not Corizon doctors or nurses — finally diagnosed Collingwood with a MRSA infection in late August, the bacteria had infiltrated his body. According to a complaint filed in Maricopa County Superior Court, spores were "growing on his lungs and on the valves of his heart."

An infectious disease specialist at the hospital told Collingwood that he would need open heart surgery to replace his tricuspid valve.

Immediately after the operation, Collingwood was admitted to the intensive care unit. The next day, as a nurse tried to help him sit up, he passed out. His heart had stopped beating.

The nurse resuscitated him. Later, Collingwood learned that the pig's valve used to replace his tricuspid wasn't keeping up with his aorta. He would need a pacemaker for the rest of his life.

Other people incarcerated in Arizona have not been as lucky as Collingwood. 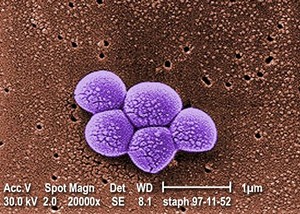 A cluster of MRSA bacteria, magnified 20,000 times.
Public Health Image Library
Local medical examiner's records show that at least four inmates in prisons in or around the Valley died because of apparently untreated staph aureus — some of it the drug-resistant MRSA — in 2018.

In February 2018, Jesse Albert Zermeno was taken to the hospital from the state prison in Florence, complaining of weakness, fever, chills, and sweats. He was also coughing up blood. Diagnosed with pneumonia, Zermeno was found to have growths — "vegetations," in medical lingo — on two of the valves of his heart.

The cause of death was staph aureus sepsis, the medical examiner's report said. Zermeno was 31 years old.

A second inmate, Theresa Irene White, died of sepsis stemming from MRSA pneumonia. She was incarcerated at the prison in Perryville and taken to the hospital in February 2018 for shortness of breath and fever. She was 54.

The third, 35-year-old Tony Mariano Ruiz, who was incarcerated but not in a state-run prison, was taken to the hospital in June 2018, where doctors found that he, like Zermeno and Collingwood, had growths on his heart valves. He had MRSA, septic blood clots in his lungs, and multisystem organ failure.

Clinton Lee Spencer, an inmate at Florence, died in a hospital at the age of 60 "after experiencing progressive respiratory failure." The medical examiner's review of medical records "revealed a history of acute respiratory failure" and a staph aureus ulcer in his larynx.

These four deaths are out of a total of 23 incarcerated men and women who died natural deaths — not homicides, suicides, or overdoses — in Maricopa County in 2018, according to county medical examiner's reports, which Phoenix New Times obtained via public records request.

The records form an incomplete picture of death by infection in Arizona prisons. They do not represent the deaths of all people incarcerated in prisons located in Maricopa County, for example.

Nevertheless, these reports contain snatches of medical information otherwise shielded by federal health care privacy laws. They show just how ill inmates were allowed to become — not just from infections, but from chronic illnesses like cirrhosis or cancer — before being brought to the hospital on their deathbeds. In some cases, doctors take extreme measures, like opening a hole in Spencer's windpipe, in a last-ditch but ultimately futile attempt to save lives.

Some reports are more comprehensive than others, referencing medical records and, sometimes, providing a brief medical history. Others are sparsely detailed, offering little clarity on the circumstances preceding a death.

After months of misdiagnoses by Corizon, MRSA spores were growing on Collingwood's lungs and heart valves, according to the lawsuit.

Most of the time, these death reports rarely show how a person came to be so sick. Were they repeatedly misdiagnosed? Ignored or medically neglected for weeks, months before they arrived in the emergency room, as Collingwood says he was?

“We’ve had multiple cases of MRSA and antibiotic-resistant MRSA,” Corene Kendrick, a staff attorney with the Prison Law Office who co-represents the incarcerated plaintiffs in the ongoing Arizona prison health care case Parsons v. Ryan. "People have died from untreated infections," she said.

Last Friday, Kendrick and other lawyers asked a judge to appoint a federal receiver to take over health care in the state's prisons, as part of the ongoing settlement in Parsons v. Ryan.

So far this year, as of July 31, one inmate has died of unspecified sepsis and another of staph aureus, according to Maricopa County medical examiner reports.

The Arizona Department of Corrections does not comment on pending litigation, and it is prevented by federal law from discussing inmates' medical information, a spokesperson said in response to a request for comment on Collingwood's case.

The department does not track how many inmates are infected with MRSA, Andrew Wilder, an ADC spokesperson, told New Times via email, but it does receive reports from its medical vendor on the number of inmates being treated each month for the bacteria.

Data from the last fiscal year, when Corizon was still under contract, shows that the company provided 273 treatments to inmates with MRSA from July 2018 through June 2019. That number is a tally of patients whose treatment continued from one month to another, "so the actual number of individuals with a MRSA infection will be lower," Wilder said.

The number of inmates in Arizona prisons being treated for MRSA every month from July 2018 to June 2019.
Arizona Department of Corrections

Whether Collingwood would have been included in those numbers — he was never diagnosed with MRSA or treated for it at the prison, after all, according to his lawsuit — remains unclear.

But the details of his experience offer insight into the failures of Arizona's state prison system, already notorious for medical neglect, to take care of people who have nowhere else to turn for medical care.

A week after Collingwood said he was given a Z-pack for his alleged double pneumonia, his symptoms hadn't abated, so he got another workup — more X-rays, more labs. Those results showed that the infection in the right lung was worse, but that apparently, there was no infection at all in the left lung.

A week later, medical providers said that he had tested positive for Valley fever, a fungal infection. They gave him anti-fungal drugs, according to his complaint.

By early August, Collingwood was so sick that prison officers called an emergency and brought Collingwood to the medical unit. Two Corizon nurses said that Collingwood needed to go to a hospital and that he needed IV antibiotics, his complaint stated.

Instead, Collingwood was given more oral antibiotics and returned to his unit. Over the ensuing weeks, his pain worsened. Walking 200 feet to the chow hall was excruciating — "tears-in-your-eyes pain," Collingwood called it. Eventually, he was sent back to the medical unit for more X-rays.

This time, Corizon determined that Collingwood had tuberculosis. Only then did they send him to the hospital, nearly three weeks after the two nurses called for him to be hospitalized, where he was finally properly diagnosed. Still, even when doctors told him they were shocked he was alive and that he had a 50 percent chance of living, no one from the prison ever contacted his emergency contact — his mother — to let her know, he said.

A year after his open heart surgery, Collingwood's health is still "up and down."

"Some days I don't feel too good," he told New Times in a phone interview from the state prison in Florence, where Collingwood is currently housed in the infirmary following a separate gallbladder infection that landed him in the hospital.

"Since all this happened, I'm prone to getting infections easier now," he said. Still, "I feel absolutely lucky that I'm alive," he said. "I thought I was going to die on the yard." 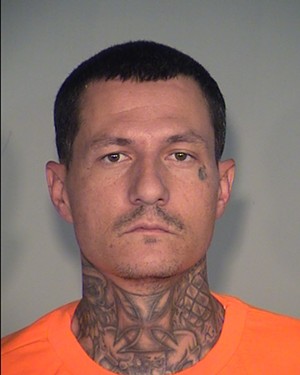 Waylon Collingwood
ADOC
Collingwood's lawsuit alleges that Corizon and the nurses were negligent, because it was under their care that Collingwood's infection "progressed to a level so severe that treatment required open heart surgery to replace infected heart valves."

It claims that their "care" was substandard, and that Corizon employees were "deliberately indifferent to his serious and worsening medical condition." The company, too, was negligent in hiring, training, and supervising the six nurses named in the lawsuit.

"Had they been careful in the hiring, training and/or supervision of these Defendants, Collingwood would not have suffered the serious physical injuries he received and would have received timely and appropriate medical care at the prison," the complaint states.

Collingwood wants a jury to determine damages. He is nearing the end of a six-year sentence for bringing contraband into prison while serving time for charges of theft and burglary. He is scheduled to be released in 2020 — if he lives.
KEEP PHOENIX NEW TIMES FREE... Since we started Phoenix New Times, it has been defined as the free, independent voice of Phoenix, and we'd like to keep it that way. With local media under siege, it's more important than ever for us to rally support behind funding our local journalism. You can help by participating in our "I Support" program, allowing us to keep offering readers access to our incisive coverage of local news, food and culture with no paywalls.
Make a one-time donation today for as little as $1.
Elizabeth Whitman was a staff writer for Phoenix New Times from March 2019 to April 2020.