A Waymo vehicle drives down McDowell Road in central Phoenix. Sean Holstege
After recently announcing the expansion of its autonomous ride-hailing operation, Waymo is preparing to serve customers in downtown Phoenix through its "Trusted Testers" program. Until now, the fleet was only operational in Phoenix’s East Valley and San Francisco. There are presently 300 Waymo vehicles in the Phoenix area.

This expansion is “research-focused,” meaning that unlike in the East Valley, downtown rides are limited to Trusted Testers, who will be pre-selected in a program by the company for their diverse transportation needs. But the testing is less about the driving (Waymo swears it’s safe) and more about the user experience.

Trusted Testers are surveyed about the vehicle, app design, and ease of use, such as smoothness of pick-ups and drop-offs. (Trusted Testers won’t be treated to free rides for their feedback.) For now, these riders will be accompanied by autonomous specialists, described by a Waymo spokesperson as “backups” monitoring the car and system as it drives itself.

Waymo has been testing operations downtown for the past several weeks, with employees along for the ride. The company provides hundreds of rides each week in the East Valley, where it has operated since 2017, and currently offers autonomous rides there.

Self-driving technology is still quite new and, to many, kind of spooky. But Waymo touts the technology, not as just “safe,” but specifically designed to reduce traffic injuries and fatalities. Waymo points out collision trends in safety reports — the ones that happen with human beings behind the wheel — and how it's developed and tested against those scenarios. In describing its technology, Waymo uses the phrase “The World’s Most Experienced Driver™." (Yes, it has been trademarked.)

In late 2020, Waymo released a safety report focused on its then-to-date operations in Phoenix. It is available on its website, and it is long, single-spaced, and scientific. Waymo reported 18 collisions or “contact events” in Phoenix between 2019 and the first nine months of 2020. None of them, it states, were life-threatening or had the potential to cause severe injury.
click to enlarge 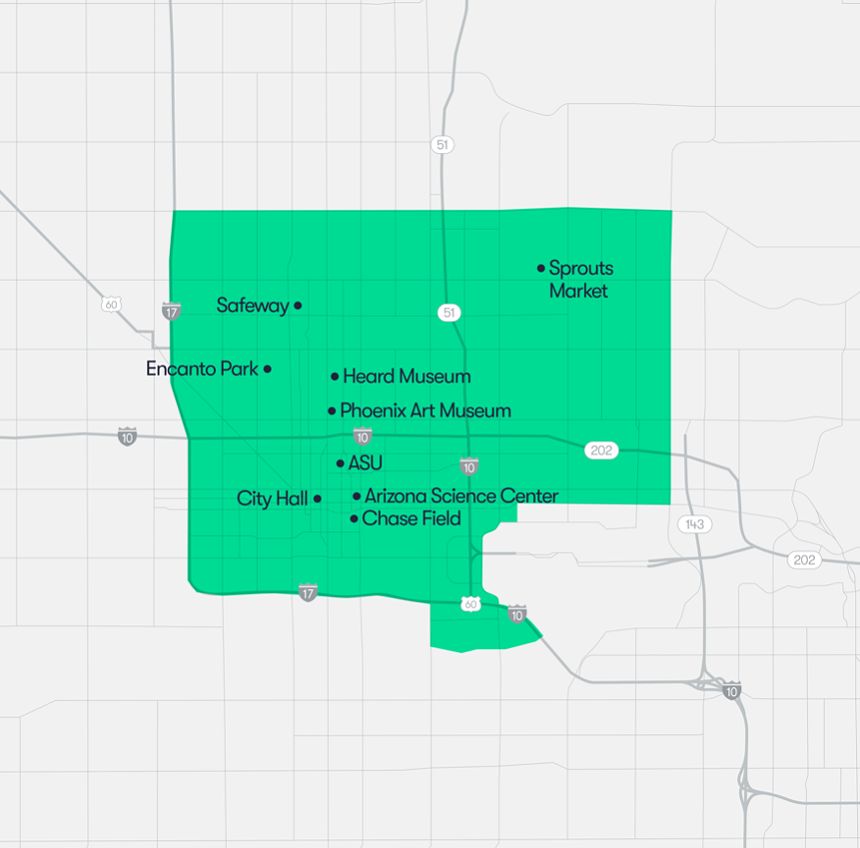 Waymo is set to bring its autonomous ride-hailing operation to downtown Phoenix.
Waymo

The report mentioned another 29 “simulated contact events,” meaning that contact was likely avoided when a human took over control of the vehicle. Airbags deployed (or that would have deployed, if not for human intervention) eight times. A vehicle was hit by a pedestrian/cyclist in one actual event (and two simulated). The most common type of “contact” is a Waymo vehicle being rear-ended (there were 11 actual events; one simulated).

Waymo concludes it is the behavior of human drivers — not its technology — that makes roads unsafe.

Riders who live or work in downtown Phoenix and want the chance to hop in one of Waymo’s camera-outfitted electrical Jaguar I-Pace vehicles can download the Waymo One app, create an account and express interest in being a “Trusted Tester.” They will be emailed a survey, and a group of eligible people will be selected — possibly as early as this week — to help Waymo “shape the future of autonomous ride-hailing.”
KEEP PHOENIX NEW TIMES FREE... Since we started Phoenix New Times, it has been defined as the free, independent voice of Phoenix, and we'd like to keep it that way. With local media under siege, it's more important than ever for us to rally support behind funding our local journalism. You can help by participating in our "I Support" program, allowing us to keep offering readers access to our incisive coverage of local news, food and culture with no paywalls.
Make a one-time donation today for as little as $1.