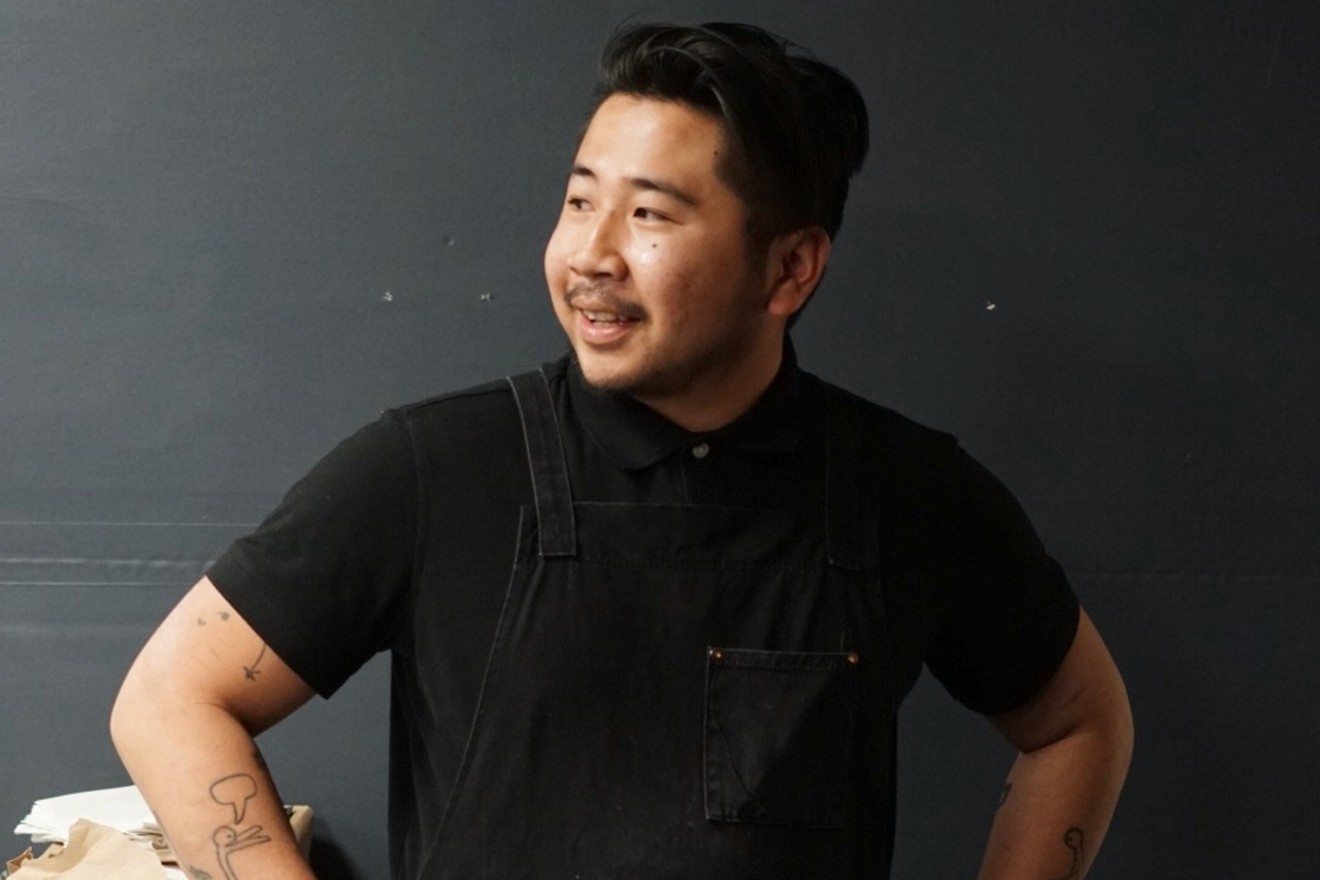 Tyka Chheng, who helped open cocktail bars Baby Boy and Khla, apologized after he was accused of sexually harassing women. Photo by Will Coles/Courtesy Misa Hospitality
A prominent metro Phoenix bar owner and cocktail expert was kicked out of his bars' ownership group on Wednesday following a series of sexual harassment accusations from women that were shared on social media.

Tyka Chheng, who helped open downtown Phoenix cocktail bars Baby Boy, Khla, and the forthcoming Liar's Club, has been working his way to the top of the Valley's cocktail scene since he moved to Arizona in 2013. Before opening Baby Boy at the Pemberton, Chheng worked as a bartender at Highball. Prior to that, he mixed drinks at UnderTow and led the beverage program at Gallo Blanco.

Most recently, he partnered with other food and beverage veterans Colton Brock and John Sagasta, who owns Jobot Coffee & Bar, to open his new downtown concepts. Together, the group made up Misa Hospitality.

But the hospitality group announced its split from Chheng in posts to the social media accounts of its bar concepts after accusations against him surfaced on Wednesday.

"We have a strict zero tolerance policy for disrespect & disorderly conduct," the post read. "It is with regret we have to inform you all that we were forced to say goodbye to one of our community members today due to an inability to abide by that policy."

Chheng is well known for Khla, a bar on East Portland Street that was inspired by his Cambodian heritage and upbringing in south Los Angeles. The menu at Khla is packed with Southeast and East Asian flavors as Chheng worked to infuse his culture into the cocktails. For that effort, he was celebrated.

That was until Chheng's reputation came under fire this week as women shared stories and screenshots of disturbing messages they said came from the bar owner.

Former Phoenix bartender Meagan Northcutt took the lead, sharing her experience and encouraging other women to send her anonymous tips if they didn't want to post on their own social media accounts. Northcutt left Phoenix three years ago, but when Chheng messaged her earlier this week with a comment about one of her friends who still lives in the Valley, Northcutt had enough.

"Why are you commenting on a picture of my friend saying 'can I?' like she’s some object? It just really bothered me," Northcutt told Phoenix New Times. "I’ve just had enough with dudes, in general, saying stuff like that, let alone someone who is a 'bigger deal.'"

Northcutt said that since she no longer lives or works in Phoenix, she felt comfortable using her social media as a platform to share stories from other women who felt as though they could not speak out.

After her post, Northcutt said her inbox was flooded with messages detailing alleged misconduct by Chheng. The stories included vulgar texts that he continued sending after women asked him to stop messaging them.

At least twice, Chheng offered to pay women $200 to $1,000 to perform sex acts, according to screenshots of the conversations reviewed by New Times. In other instances, women alleged that Chheng followed them as they were getting picked up by a ride-share service to try to go home with them.

In one anonymous message, an Instagram user sent Northcutt this message: "I don't care how 'brilliant' he is or whatever, he IS a creep. He is misogynistic, he is trouble."

New Times has not independently verified the authenticity or accuracy of the messages Northcutt obtained.

Chheng did not respond to questions from New Times. On Thursday evening, he posted a statement to his personal Instagram page.

"I'm sorry, I want to right my wrongs the best way possible. I apologize to all those I hurt and to those who are in disbelief. I have taken a look — a long look to try [to] figure out how I got here. The human in me is completely embarrassed, mortified," he wrote.

Chheng also explained that he will be taking "leave from the industry," and using that time to "get help, and hope to conquer this addiction and battle." 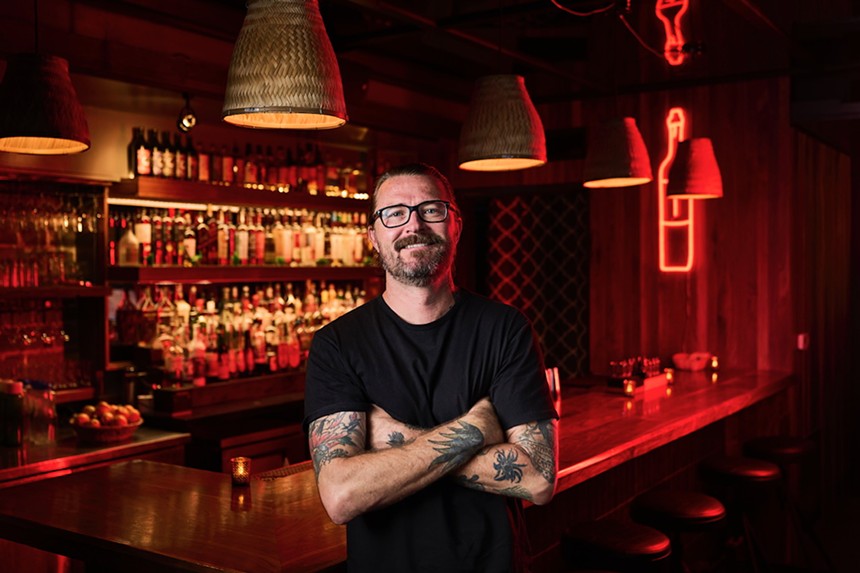 Colton Brock, one of the partners in Misa Hospitality, said the company was "appalled and disgusted" by Tyka Chheng's alleged harassment of women.
Kyle Ledeboer/Courtesy Misa Hospitality

Northcutt said the sheer number of messages she received that share similar stories is "wild."

"It is crazy that this person had not been canceled already. But that’s what makes me mad, and why I feel so strongly about all this," she said. "Because the reason why this hasn’t come out is because that person has a place of power in Phoenix. And that shit has to stop."

In what Northcutt described as an almost immediate response, the team at Khla messaged her on Instagram and apologized. They explained that they would be taking steps to cut ties with Chheng, she said.

Not long after, the social media accounts of the bars connected with Chheng posted a public message calling him out by name, describing his actions as "the most inappropriate of behaviors," and stating that "he has been ejected from all projects immediately." A second statement posted to the Instagram accounts of each bar said the businesses "have a strict zero tolerance policy for disorderly conduct."

Some people applauded the response by Brock and Sagasta, the remaining members of Misa Hospitality. But others criticized the wording of the apology.

"Thank you for understanding that even though humans make mistakes, we have no tolerance for missteps involving disrespecting others," the statement ended. That prompted outrage from some people who said it characterized Chheng's alleged sexual harassment as a "misstep."

In a message to New Times, Brock expanded on the company's statements posted on Wednesday.

"We were appalled and disgusted yesterday when the news of Tyka's actions reached us and we immediately cut ties with him and our businesses," Brock said.

"This is 1000% percent against our code of conduct. We have a lot of good people in the community that work for and with us and we wouldn't accept this from anyone let alone a partner. I'm not sure what else I could add to that other than we are striving to take the actions to make this right," Brock added.

After the hospitality group issued its statements, some people commented on the posts and called for proof that Chheng was fully removed from the business and will no longer receive any financial benefit from his former bars.

From its Instagram account, Khla responded with a comment that said Chheng was locked out of bank accounts and the process to remove him from the company was underway. "I don't know how long it takes the corporation commissions to make the changes on their end but I assume if you look in a week you'll see he's removed," the business said in the comment.

"There is no way we are giving him another cent, or aligning ourselves with someone that shows such lack of morality," Khla added in a second comment.

Other members of the Phoenix food and beverage scene said the situation was disappointing yet unsurprising and was symptomatic of a larger "old boys club industry culture" in the local bar scene. Northcutt said she hoped that sharing her own and other women's stories might change that — or take a step toward creating a safe place for women in the industry that, she added, doesn't currently exist.

"This is one story," she said. "Every woman I know in the industry has a story about some dude like this. Some dude that holds a place of power or works for some brand and they can’t say anything. These dudes need to start calling each other out."
KEEP PHOENIX NEW TIMES FREE... Since we started Phoenix New Times, it has been defined as the free, independent voice of Phoenix, and we'd like to keep it that way. With local media under siege, it's more important than ever for us to rally support behind funding our local journalism. You can help by participating in our "I Support" program, allowing us to keep offering readers access to our incisive coverage of local news, food and culture with no paywalls.
Make a one-time donation today for as little as $1.