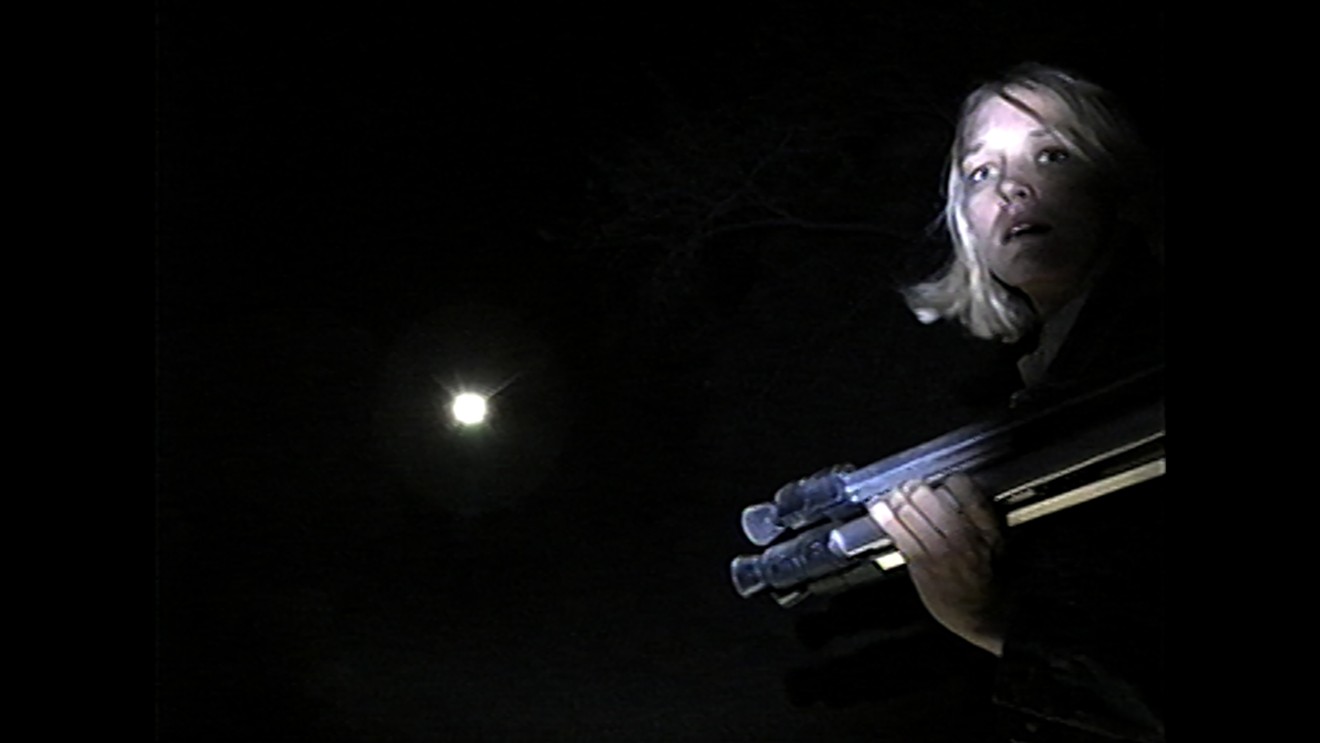 Phoenix Forgotten is like Blair Witch with UFOs. Cinelou/Scott Free Productions
Flying saucers carrying mysterious visitors are one of the classic sci-fi motifs. But there are visitors and there are visitors. Some aliens, like Klaatu in The Day the Earth Stood Still (1951), land their saucer on the Mall in Washington, D.C., then walk right out backed up by his badass robot Gort and sternly tell the human race to clean up our act.

Then there are visitors of the sort we see in Earth vs. the Flying Saucers (1956), who pilot the death-ray-vomiting crafts of the title, and eventually lay waste to Washington D.C.

But then there are the sort of visitors who prefer to keep on the down-low, the sort whose saucers are only witnessed accidentally, out in the boondocks, where, as Jay Leno used to put it, “Bob Bookey and his Cousin Weenie” are fishing. Leno’s theory was that these visits were bathroom breaks: “If you’re traveling the universe, coming to Earth is like stopping at Stuckey’s.”

Anyway, movies and TV shows in this category are the true UFO movies, heavy on the “U.” They exploit not only the thrill of an encounter with otherworldly beings, but also the isolation of being disbelieved, or the paranoid terror of being at odds with a government cover-up.

A new entry in this UFO genre opens this weekend: Phoenix Forgotten, a found-footage chiller inspired by the famous Phoenix Lights phenomenon of March 13, 1997 — sort of a sci-fi spin on The Blair Witch Project. So to welcome it, let’s take a look at some of its more memorable predecessors.


The Flying Saucer
The term “flying saucer” was popularized in the wake of pilot Kenneth Arnold’s reported sightings in 1947, and gradually came to be applicable to any UFOs, even if they weren’t actually saucer-shaped. This low-budget 1950 melodrama was probably the first to cash in on the craze, but — spoiler alert! — the vehicle in question turns out to be of earthly origin: a secret experimental aircraft developed by a scientist, and coveted by Commie agents. It is, however, a pretty cool retro-looking saucer, sort of like a metallic horseshoe crab. Producer-director-star Mikel Conrad, who also concocted the story, added a note in the credits suggesting the film was showing something classified: “We gratefully acknowledge the cooperation of those in authority who made the release of the ‘Flying Saucer’ film possible at this time.”


Invasion of the Saucer Men
Paul Fairman’s short story “The Cosmic Frame” was about aliens who frame a guy for a hit-and-run in order to discredit his account of their presence on Earth.This tongue-in-cheek 1957 screen adaptation features iconic, bulbous-brained, irritable-faced little aliens — creations of the great ‘50s-era monster designer Paul Blaisdell — shooting their witnesses up with alcohol from their pointy fingers, thus either killing them or rendering them too drunk to believe.


The Bamboo Saucer
The title craft isn’t made of bamboo, but it’s hidden in a remote temple in China, so, you know, bamboo. It could as well have been titled The Kung Pao Saucer. Even though it is an alien spaceship in this 1967 effort, the conflict still derives from the Cold War. The aliens who brought it to Earth are already dead, and American and Soviet scientific-military teams are competing to get their hands on it. There’s a thawing of international relations as the two sides team up, and the studly U.S. pilot (John Ericson) and the hottie Soviet scientist (Lois Nettleton) fall in love. The highlight of the dialogue comes when the scientist, having activated the saucer’s gravitational field, cries out “Ve vill be skvooshed, like bugs!”


The Invaders
This TV series (ABC, 1967-1968), created by Larry Cohen for Quinn Martin Productions, had a particularly seamless conspiracy-theory premise: In the first episode, hero David Vincent, lost on a lonely country road, sees a flying saucer land near an abandoned diner. It turns out be part of a fleet belonging to the title aliens, refugees “from a dying planet” who have taken human form to infiltrate human society, in order to take over Earth. Whenever an individual invader was killed, its body would vaporize, thus destroying the evidence. Vincent thus becomes an itinerant hero, a la David Janssen in The Fugitive, traveling from one set of guest stars to the next every episode, now and then convincing a few people that he’s right. The Invaders are imperfect human knockoffs, however. Most of them have a “tell”: their pinky fingers are rigid! There’s something marvelous about the idea that the aliens have perfected not only interplanetary travel but human duplication, yet they find it tricky to bend the pinky finger.

UFO: Target Earth
Shot in Georgia, this 1974 low-budgeter features a young researcher (Nick Plakias) who makes contact with a spaceship submerged in a remote lake. The pure-energy aliens therein are depicted via electronic special effects reminiscent those near the end of Kubrick’s 2001, though more primitive — many of them now look like Spirograph designs. Also like Kier Dullea in 2001, our hero here ages rapidly under the influence of the aliens, ultimately looking very peaked indeed. Make no mistake, this is a terrible, slow-moving film, but having seen it at a theater when I was 12, I can attest that it has a strange, creepy atmosphere that can stick in your head. For decades. Maybe it has to do with the spooky, pretty Mystic-Tides-ish theme song, “Between the Attic and the Moon.”

Liquid Sky
It’s pretty likely that no UFO movie has ever had quite as much hipster cred as this 1982 indie, a hilarious but also harrowing take on the drug-fueled ‘80s New York club-fashion scene from Russian expat director Slava Tsukerman. The dinner-plate-sized flying saucer that lands on the roof of a Manhattan apartment building contains an alien — represented by electronic effects similar to those in UFO: Target Earth — attracted to areas with lots of heroin. The alien pilot starts observing a resplendent club model (Anne Carlisle) and feeding on the opiate-like brain secretions of her lovers during orgasm, causing the orgasmic person to die of a crystal spike to the head. After this their bodies disintegrate, like in The Invaders. “Orgasms are dangerous,” concludes one observer.

The Search for Simon
The searcher is David, a fortyish, unemployed “ufologist.” Simon is the younger brother, absent since they were kids, who David is convinced has been abducted by aliens. David’s spent his whole adult life, and most of a substantial lottery windfall, traveling the world to supposed UFO hotspots from Denmark to Utah, or paying shady-seeming contacts for supposed leads to Simon’s whereabouts. He’s tried repeatedly, without success, to get into Area 51. His few friends, hopeless geeks themselves, are sick of his fixation, as is his careworn mum. David is played, well, by Martin Gooch, who also co-wrote and directed this low-budget Brit comedy of 2013. Gooch freely mixes a Monty Python/Douglas Adams/Simon Pegg style of silliness with a poignant backstory. The poignancy wins here, partly because the variable quality of some of the acting dulls the edge of the comic timing in the ensemble scenes, but also because — spoiler alert! —said backstory is really quite sad. Python alumna Carol Cleveland, playing David’s mother, is given full-on tragic exposition to deliver, and does a creditably touching job of it. But the seriousness of this side of the material gives an uneasy tinge to the jolly side.

KEEP PHOENIX NEW TIMES FREE... Since we started Phoenix New Times, it has been defined as the free, independent voice of Phoenix, and we'd like to keep it that way. With local media under siege, it's more important than ever for us to rally support behind funding our local journalism. You can help by participating in our "I Support" program, allowing us to keep offering readers access to our incisive coverage of local news, food and culture with no paywalls.
Make a one-time donation today for as little as $1.
M.V. Moorhead
Contact: M.V. Moorhead