Jay Valdez has had a hell of a year. The Phoenix DJ is now in his 40s, and he has been spinning and scratching around town for decades. But he's no hobbyist. Under the name of DJ Akshen, Valdez is a professional turntablist, and he's got the accolades to prove it. In 2015, he won the regional finals for the Red Bull Thre3style competition, essentially earning him the crown of the Southwest's best DJ. The win also propelled him into the national finals (which took place at downtown's Monarch Theatre), but he failed to advance to the global competition, where he could have competed for the title of best DJ in the world. Nevertheless, Akshen is still king of the hill around here, and there's nobody more deserving of the title.

Mija is Spanish for "my daughter," but you can use it as an endearing term for any younger woman you think of sweetly. Having a DJ name like Mija welcomes listeners to explore your music, and over the past year or two, more and more people are answering the call. People outside Arizona really began to take notice of Phoenix-born Mija in 2014, when she and Skrillex performed a surprise set at Bonnaroo. With the crown prince of EDM's blessing, Mija exploded, moving to Los Angeles and steadily moving her way up in the EDM world. She's now getting on major shows and raves around the country, and though she's at the bottom of the bill these days, we have no doubt she'll soon be headlining.

In Old Town Scottsdale, clubs come and go so quickly that it's hard to pick a favorite, as there's a good chance it'll be gone in five years. BLUR, for example, is less than a year old, taking the place of Smashboxx, which itself had a shelf life of less than one presidential term. But for now, we'll enjoy BLUR, which has the best atmosphere around. It's got a big old dance floor, carefully lit with colorful lights, VIP tables galore, and a patio filled with comfortable couches for when you need a break from the tasteful EDM playing inside.

Scottsdale's Livewire is a spectacular place. As Tempe lost numerous music venues and bars in 2014, Scottsdale gained Livewire. The club is in the heart of Old Town, where live entertainment usually means a top-shelf DJ or a cover band. But Livewire is different. The 11,000-square-foot club boasts a top-notch stage and brings in high-quality touring bands, a rarity for Scottsdale's entertainment district. Everything about the club screams class that doesn't take itself too seriously. There are pictures of famous musicians on the walls, sure, but the frames are digital, meaning that they change and occasionally display video throughout the night. The bars (there are multiple, as the venue is two stories) are sleek and beautiful. And then there's the crowning jewel of the venue: A giant wooden eagle, with a wingspan that must be 25 feet long, towers above the stage, wings spread valiantly to each side. Instead of feathers, there are guitars and speakers. Could a piece of art be more rock 'n' roll? 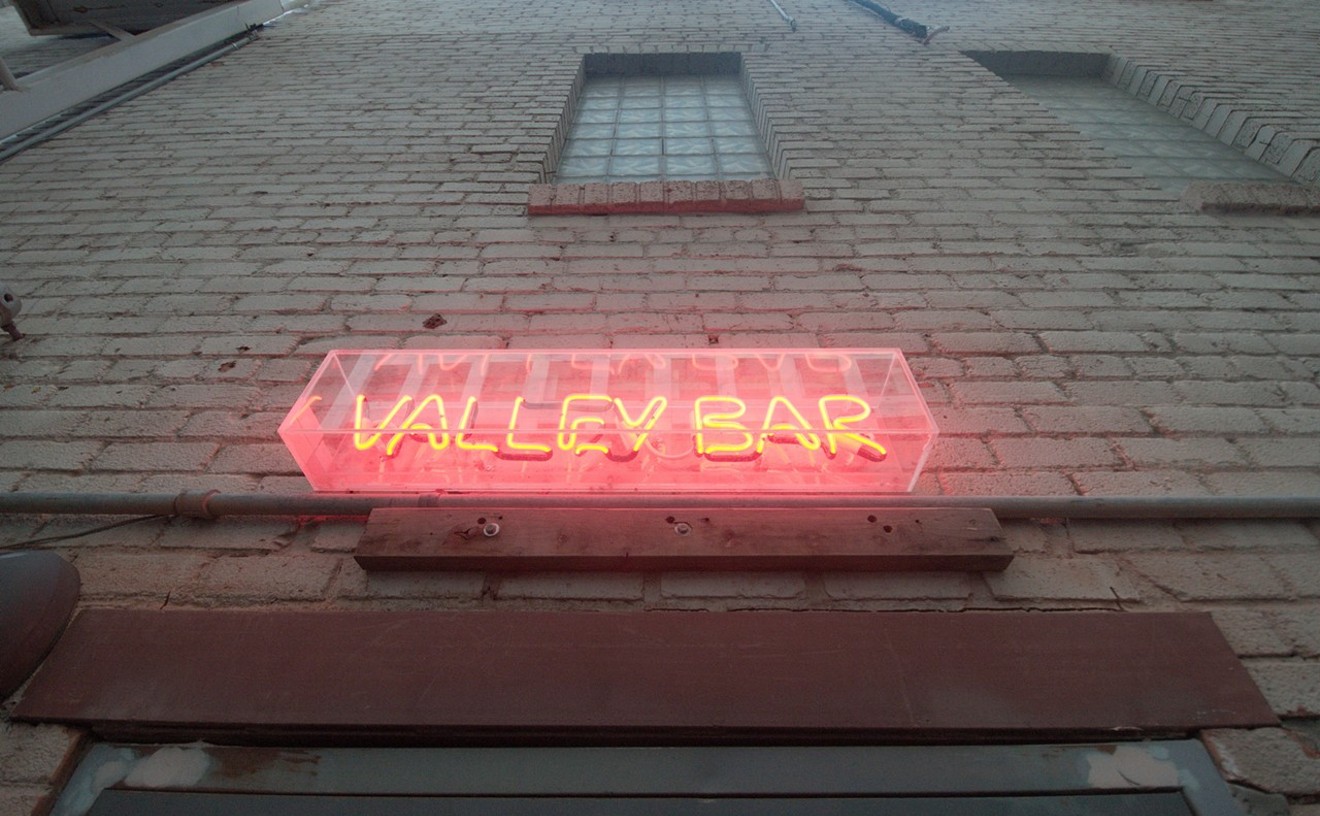 You could shorthand Valley Bar as Crescent Ballroom's little sister, and though you'd mostly be correct, it doesn't quite capture the vibe of Charlie Levy's new subterranean venue. Getting in has a wonderfully speakeasy aura: down an alley and then down a flight of stairs, where the club is divided into the music hall, where bands like Tanlines and Screaming Females play and local DJs provide themed nights, and the Rose Room, a lounge named for Arizona's first female governor, Rose Mofford, with games, beautiful pool tables, and a selection of cocktails named for Arizona's political elite (don't worry, the McCain is much smoother than its namesake). One of our favorite activities? New Times' monthly Bar Flies, in which Phoenicians share hilarious and touching anecdotes (we admit — we're biased). With food from Short Leash Hot Dogs, Valley Bar is another winner, and much like its big sister down the road, it's quickly become a go-to hangout for locals of all stripes.

It is 100 percent accurate to call promoter Steve Chilton's Rebel Lounge a new music venue. The space opened in 2015, after all, and before Chilton bought the place, it had been two different gay bars for more than a decade. But we're calling this a "reboot venue" because of the history of the building where the Rebel Lounge resides. From 1979 to 2004, the building housed the Mason Jar. Any old-school music fan's ears will perk up at the mention of the storied venue, where bands like Tool, Nirvana, and others reportedly played shows early in their respective careers. But the Rebel Lounge is more than its history. With a brand-new sound system, stage, lights, and bar, the venue is primed to start its own chapter in Phoenix music history. 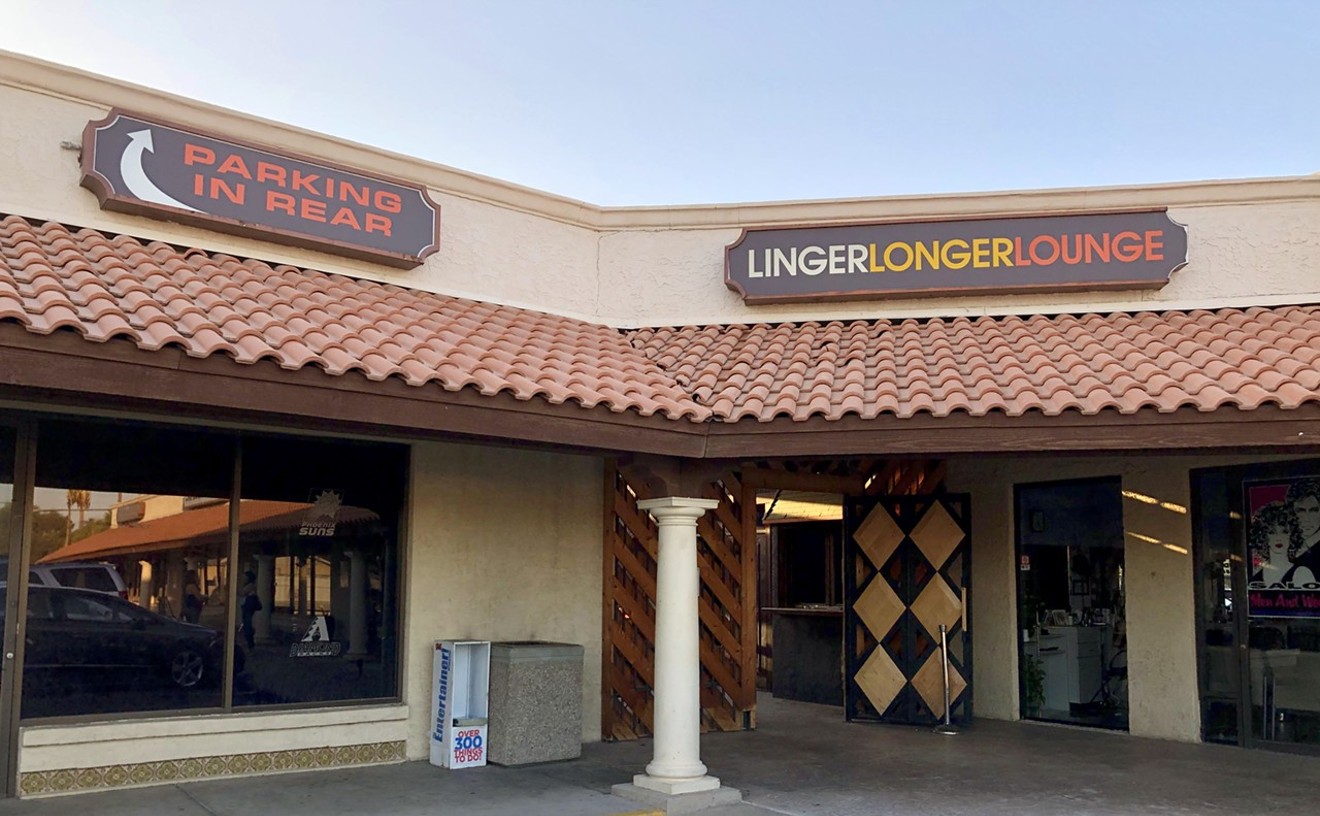 Ain't no party like a Tongue Tied Party. And now that the monthly meetup has moved from its humble beginnings at Apollo's to Linger Longer Lounge, the chances of anything coming close are few and far between. Every first Saturday, the Tongue Tied folk take over Tucker Woodbury's uptown Phoenix bar with dancing, drink specials, photo booths, prizes, games, and, as always, a stellar theme. Whether you made it out in your flannel and frayed denim cutoffs to their venue's debut (a '90s party in April), or had a chance to battle it out costume-style at Tongue Tied's Superhero vs. Sci-Fi Anniversary Party, you know that the new space is really setting the mood for Phoenix's favorite dance party.

Yucca Tap Room is one of the best rock bars in the Valley, period. Featuring the perfect combination of quality food and drink and divey atmosphere, Yucca has stalwartly maintained its presence as an oasis for live music in Tempe as surrounding venues have dropped like beats at a dubstep show. Yucca has anchored itself as both a destination for underground touring bands and locals who have gained somewhat of a following. And don't forget one of the best bonuses of playing at Yucca: Double Nickel Collective, a kickass record store, is just next door. So, if the music gets too loud or stops matching your taste, you can pop over and flip through records more to your liking. 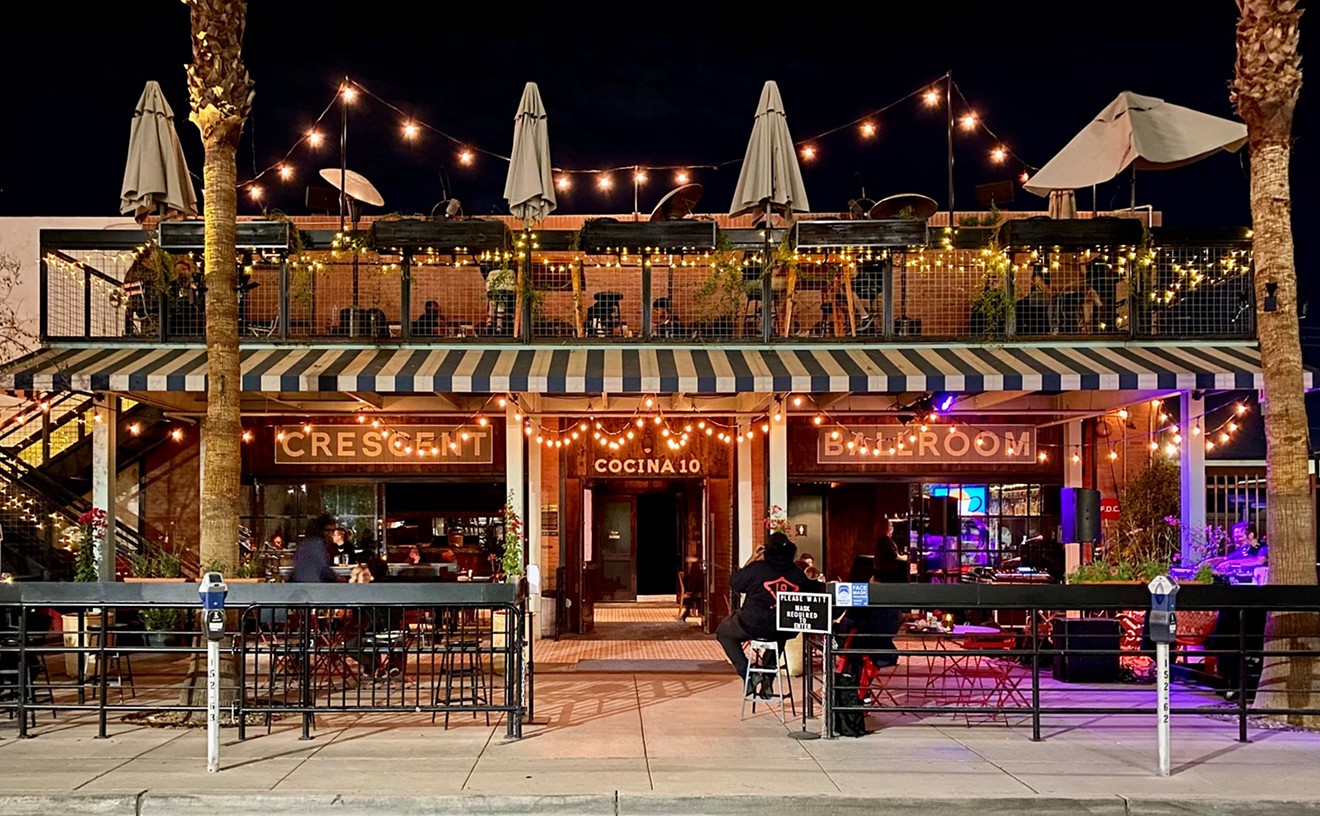 There are a number of reasons Crescent Ballroom is the first venue Phoenix residents mention to their music-loving friends when they come for a visit. First, the venue is so cool that beautiful people go there to eat and hang when there's not even a show happening, because the cocktails and food are both simple, delicious, and reasonably priced. Then, inside the ballroom, there's great sound, bleachers in the back for tired legs, and two bars, perfect for the 550-capacity venue, so there's rarely a wait for drinks. It's a wonderful spot to catch an intimate show, as well as a great place to cut loose when the situation demands.

Lost Leaf is a bar/music venue that offers live music seven nights a week on Roosevelt Row's vibrant Fifth Street. It's a fine example of the adaptive reuse that gives the downtown arts district its character — Lost Leaf resides in an old home that at one point housed a Max's Sausage store. This means the interior of Lost Leaf doesn't feel anything like a modern venue; you wend your way around the bar and past walls adorned with painting by local artists to get to where the bands perform. But you can't really call it a stage at Lost Leaf. It's more of a nook, a rectangular recess that squeezes the band into close quarters and shoehorns spectators into a similar area just out in front, wedged between the band, the bathrooms, the exit to the smoking area, and the bar. The result is perfect for rock. The small area creates density, feeding musicians the energy of a packed house, which the band in turn unleashes on the audience. It's rock 'n' roll paradise.