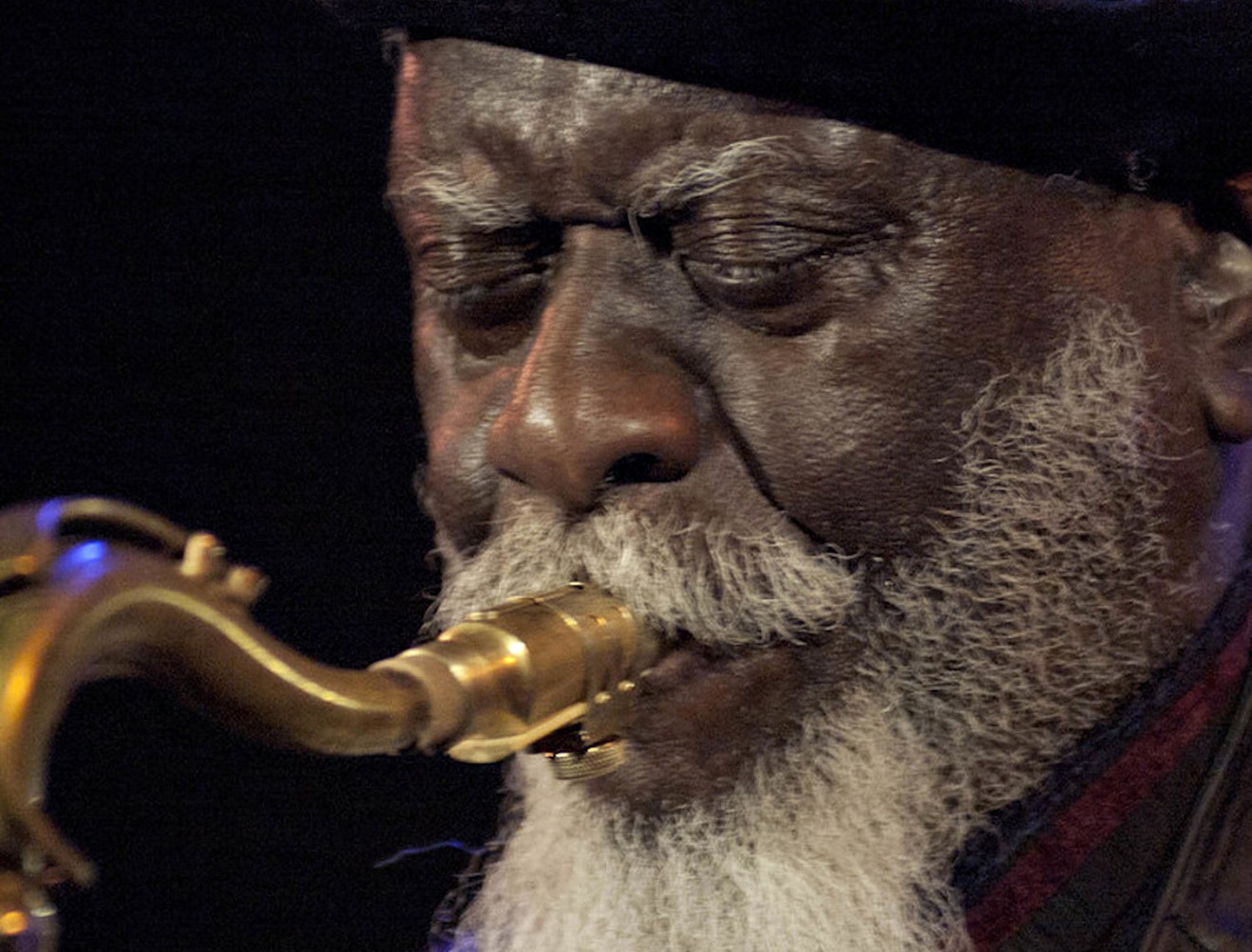 Pharoah Sanders will perform at the Musical Instrument Museum. Michael Sherer
The most famous quote about saxophonist Ferrell “Pharoah” Sanders centers on an understanding of one of the cosmic mysteries at the heart of Christianity: the concept of the Holy Trinity, the godhead divided into three persons. Completely connected, but completely distinct. “Trane was the Father, Pharoah was the Son, I am the Holy Ghost,” the avant garde saxophonist Albert Ayler famously decreed, suggesting that John Coltrane, Alyer, and Sanders were tied together, three people in unison, drawing from the same deep well of intent and passion. But Coltrane died in 1967, Ayler in 1970, leaving Sanders to carry on their shared tradition of jazz as “freedom music,” an expression and commitment to channeling the divine through his horn.

As a band leader, Sanders has done exactly that, employing an approach that’s alternated between gentle and fiery. His 1969 LP Karma featured the ecstatic “The Creator Has a Master Plan,” a half-hour composition that helped define the “spiritual jazz” movement, blending Eastern modalities and wide-ranging invocations of global sacred music traditions. His solo LPs — particularly those for Impulse Records — are largely essential, but it’s his playing as a sideman that offers a particularly clear look at his creative resonance. Sanders’ list of collaborators includes the most adventurous of the jazz vanguard. He’s played with Sun Ra, Ornette Coleman, Don Cherry, McCoy Tyner, and dozens more, but his ability to be one with the band and a singular force is one of Sanders’ most expressive qualities. These five songs demonstrate that distinct ability.

John Coltrane’s “Kulu Sé Mama (Juno Sé Mama)” (1967)
An “astral jazz” tour de force, “Kulu Sé Mama (Juno Sé Mama)” winds African and Asian motifs together over incantatory chants. Coltrane and Sanders tug and pull on each other, goading the other toward increasingly more aggressive trills. Coltrane’s free jazz path would lead him to the stunning Interstellar Space a few years later, but this recording suggests the roads Sanders would travel for the foreseeable future.

Alice Coltrane’s “Journey in Satchidananda” (1970)
Following John’s death, his wife, pianist Alice Coltrane turned to the harp and immersed herself in the teachings of Swami Satchidananda, for whom she named this remarkable composition. Over droning tamboura, the meditative bass of Charlie Haden, and Coltrane’s plucked strings, Sanders’ melodies split the difference between a soulful trance and spiritual longing.

Sonny Sharrock’s “Promises Kept” (1991)
Sonny Sharrock was legendary among jazz guitarists for his ability to balance melody with sheets of pure noise. But following the gentle introduction of the opening number on the Bill Laswell-produced Ask the Ages, Sharrock has to give it his all to match the punk squall of Sanders, whose shrieking ferocity is baffling and inspiring.

Sleep Walker’s “The Voyage” (2008)
Japanese quartet Sleep Walker’s collaboration with Sanders is a late career highlight for the saxophonist. Evocative of his early ’70s albums, “The Voyage” is pure lilt — all a part of the Creator’s master plan. Perfectly paired with saxophonist Masato Nakamura, Sanders seems as taken with the vibe as listeners will be: He lets loose one of his famous exclaiming shouts to commemorate the spirit in the room.

Pharoah and the Underground’s “Jagoda’s Dream” (2014)
As cornetist Rob Mazurek’s Sao Paulo Underground churns up a knotty, circular groove underneath him, Sanders bops with impressionistic and spontaneous ease, sounding just as at home in the Underground’s world of post-rock, electronic, digital jazz fusion as he does on his own world-music-inspired solo compositions.

The Pharoah Sanders Quartet is scheduled to perform two sets on Friday, July 28, at the Musical Instrument Museum. Tickets are $33.50 to $48.50 via mim.org.

Editor's note: This article has been updated from its original version to clarify that "Jagoda's Dream" was recorded by Pharoah and the Underground.