Antonia Farzan
If you were looking to interview a stereotypical Trump supporter at the Phoenix Convention Center on Tuesday night, you would have had plenty of options to choose from.

There were the senior citizens hooked up to oxygen tanks, dressed in a white polo shirts and red Make America Great Again caps, muttering about how John McCain was a traitor because he hadn't voted to repeal Obamacare.

Then there were the barrel-chested Second Amendment enthusiasts, many of them wearing camouflage hats and T-shirts with slogans like "God, Family, Guns, and Trump" or the slightly terrifying "Get on Board With Trump or Get Run Over." ("Can you do me a favor and shoot them?" one of them joked to a police officer guarding protesters outside.)

But we also noticed something odd: There were a lot of women. Not just middle-aged, bleach-blonde Kelli Ward types. Young women. Many of whom weren't even old enough to vote yet.

So we asked them: Why are you here tonight? Here's what they told us. Antonia Farzan
Madison Alexandra, 26, Scottsdale.
It was my idea to come, and I brought my older brother with me. I was so excited, especially after his speech last night [about Afghanistan]. I thought it was best speech he's ever given. I think he does a really good job of speaking to the people — he speaks differently than any president, ever. Antonia Farzan
Cassandra Roche, 29, Avondale, pictured with Wayne Savage, 46, also of Avondale.
It was both of us who decided to come. I'm all about it, I'm all for him. The wall is going to keep violence and drugs out — and I'm Mexican! He's going to help the military, and make sure they have what they need. We need a brighter future kids for our kids, and this man will do it. Antonia Farzan
Sarai F., 13, from the Inland Empire of California, pictured with her mom, Shannon.
I thought it was a really good speech, and the change he's making is really going to help the country. I like the part where he brought up the fake news part — where he kind of exposed them. I thought it needed to be brought to light more. Antonia Farzan
Stevie Burns, 17, Peoria.
My family was planning on coming, so I decided to go because it was kind of a once in a lifetime experience. I liked how involved the crowd was — everyone was incorporated into it. I'm turning 18 in December, and I agree mostly with what the Republicans have to say — I was raised in a conservative family, so I see their values more. I go to Liberty High School in Peoria, and with some of my friends it was kind of like, "Ha ha, you're a Trump supporter." But I wanted to see him. 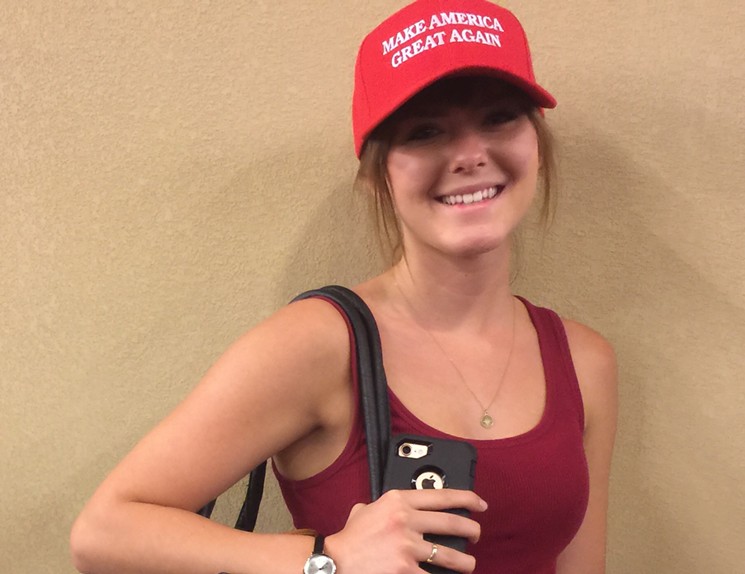 Antonia Farzan
Tatum Kuehne, 17, Mesa.
It was actually my idea to come — I made my dad take the day off work and come with me. I went to the last one by myself, but I was a little nervous that it was going to be crazy tonight, so I wanted to have my dad here. He's a firefighter. I just like that [Trump] wasn't in politics before, so I feel like he's less corrupt and no one can really buy him off. I liked what he said about Joe Arpaio tonight. I really like Joe Arpaio — I don't think was racist, I think he was doing his job. Antonia Farzan
Katherine Tazioli, 22. Glendale, pictured with her mom, Cydney Tazioli, 53, of Glendale.
It was my mom's idea to come. I'm kind of independent. I think he does well with speeches. I see some of his points. Other stuff, I don't agree with.

Cydney: She didn't say anything bad, did she? I agreed with everything he said. I would like to see more security on the border. And I'd like to see that health care law passed.