10 Nerdy Things to Do This September in Metro Phoenix

We have now entered 2019's third period. Summer is about to get the boot. Will it be a peaceful transition of power, or will weeks of dust storm darkness fall over the Valley like a middle finger from Mother Nature?

Whatever the case may be, this list of nerdy, quirky, heavy, and funny events should add a layer of joy and relief as we get back to double-digit degrees and long sleeves. 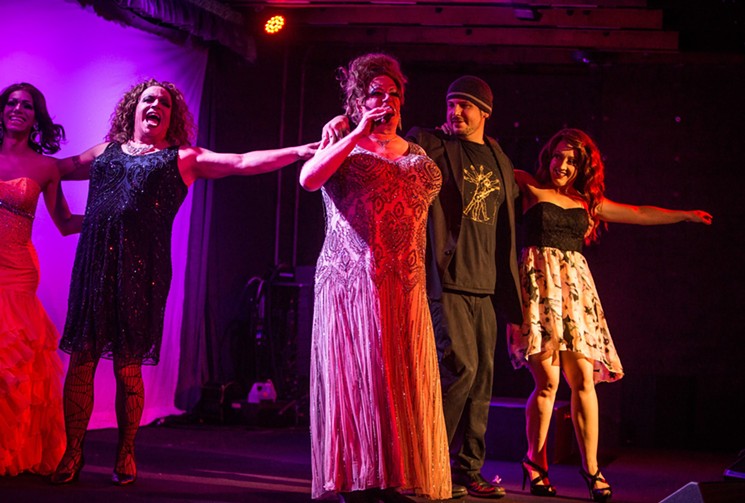 Crescent Ballroom will host another edition of the Valley's favorite filthy fierceness this month. The Queens of Crescent are putting on another fine showcase of all your favorite Magic Kingdom melodies. Each of them will be twisted and contorted through a looking glass that Walt never dreamed of peering through.

Come see this delightfully bitchy blast before the Empire of the Mouse sics its copyright infringement stormtroopers on it and ruins the party.

Dirty Disney is back at Crescent Ballroom on Thursday, September 5 at 8 p.m. Tickets are $20 in advance or $25 if purchased on the day of. Purchases can be made through Eventbrite.

It Chapter Two (Clowns Only Screening)

You've waited nearly two years for the follow-up to the horror hit, so float on down to the Alamo Drafthouse and see it in the most comforting way possible: surrounded by clowns in a confined space.

The worlds of coulrophobia and claustrophobia will be one. This special screening of It Chapter Two allows the audience to slather on the greasepaint and shoot nightmare smiles at families who are waiting in line to see the new Angry Birds movie.

What could go wrong?

Alamo Drafthouse's special screening of It Chapter Two will be held at the Tempe location on Friday, September 6 at 7:30 p.m. Tickets are $11.75 and be purchased through the official Alamo Drafthouse site.

If the Stranger Things kids have piqued your interest in the classic Gary Gygax tabletop adventure game, but you don't know the difference between a lawful cleric and a neutral druid, put your mind at ease. The nice folks at Do Better Gaming will hold your hand as you take your first steps into the world of Dungeons & Dragons. These nerds will show you just how entertaining the game can be for the uninitiated, all while maintaining the patience of a paladin for one wonderfully eyeroll-free afternoon.

Do Better Gaming will bring its latest edition of Beginner's D&D to the 19th Avenue Bookmans location on Sunday, September 8, from 1 to 5 p.m. This event is free. Visit the official Bookmans site for more info.

The documentary that introduced the mainstream world to the concept of shade will sashay its way to FilmBar this month.

For the unfamiliar, this 1990 classic takes a close look at the "house" subculture of the New York City drag scene. LGBTQ members of color who have been hip-checked by society take their Dynasty dreams and use them as fuel for competition as they each swear allegiance to their respective tribes and fight to show the city which family of fashionistas reigns supreme.

FilmBar's screening of Paris Is Burning will take place on Sunday, September 8, at 2:30 p.m. Tickets are $9.95 and can be purchased through the official FilmBar site.

Run to the hills this month and catch the metal legends.
John McMurtrie

The beasts of Birmingham are still going strong after four decades at the forefront of the heavy metal hierarchy, and they will prove it live in downtown Phoenix this month.

If you've never experienced Bruce and the boys for yourself, expect a whole other level of spectacle. We're talking stunningly elaborate sets, high energy hustle from one of the most unique frontmen of all time, and even a giant robot or two.

Iron Maiden will perform at Talking Stick Resort Arena on Tuesday, September 17, at 7:30 p.m. Tickets start at $44.75 and can be purchased through Ticketmaster.

Journey's "Don't Stop Believin'" enjoyed a lovely little comeback for the past 20 years or so. But there's a new retro-karaoke jam in town, and her name is "Africa" by Toto. We're sure this isn't what the band envisioned as they spent years assembling their discography, but we're certain they're not complaining. And for that matter, neither will the audiences at Celebrity Theatre.

Toto will bless the rains down in Celebrity Theatre on Saturday, September 21, at 8 p.m. Tickets start at $68 and can be purchased through Ticketmaster.

The Pressroom
441 West Madison Street
Raise a cone to diabetic shock this month at The Pressroom, because we'll all be gathering to show some appreciation for doughnuts and ice cream. The four-hour sugar fest is sure to be a real treat for all ages and should be well worth the glazed-over glucose fog that you'll sit in all through the following day.

The Arizona Donut & Ice Cream Festival will set up shop at The Pressroom on Sunday, September 22, from noon to 4 p.m. General admission tickets are $8 and can be purchased through Ticket Tailor.

Tom Segura: Take It Down Tour

The Netflix stand-up standout is taking his talents to the Comerica Theatre this month. The co-host of the Your Mom's House podcast has given us all a hilarious look at such topics as the pleasures of gossip to the ridiculousness of The First 48, all while providing constant reminders about how overweight his friend and fellow comic Bert Kreischer is.

Tom Segura will be appearing at Comerica Theatre on Friday, September 27, at 7:30 p.m. Tickets start at $48.50 and can be purchased through Live Nation.

Storytellers will be locked in harsh combat once again at Changing Hands this month because The Storyline SLAM is back for another round.

This month's theme is "Roommates," so expect plenty of yarns about how much tension can be wedged into a two-bedroom apartment. (Based on personal experience, it's a lot.)

The Storyline SLAM: Roommates will slam its way into Changing Hands Bookstore on Friday, September 27, at 7 p.m. Tickets are $6 in advance or $8 at the door. For ticket purchases, visit the Facebook event page.

Becky Lynch and the boys sure know how to cure a case of the Mondays.
Benjamin Leatherman

The circus is back in town, ladies and gentlemen.

Power couple Becky Lynch and Seth Rollins will spearhead another night of bodyslams and gratuitous pyrotechnics here in the Valley, and local wrestling fans are ready for WWE's latest visit. But let's be real, even a total outsider can appreciate a show like this.

As Vince McMahon has often shouted, anything can happen at a WWE show. Maybe Brock Lesnar will decide to stop by the arena to pick up a paycheck, for instance. Only one way to find out!

Monday Night Raw will jump off the top turnbuckle and land back in Phoenix on Monday, September 30, at 4:30 p.m. Tickets start at $30 and can be purchased through Ticketmaster.
KEEP PHOENIX NEW TIMES FREE... Since we started Phoenix New Times, it has been defined as the free, independent voice of Phoenix, and we'd like to keep it that way. With local media under siege, it's more important than ever for us to rally support behind funding our local journalism. You can help by participating in our "I Support" program, allowing us to keep offering readers access to our incisive coverage of local news, food and culture with no paywalls.
Make a one-time donation today for as little as $1.