Blue Man Group is scheduled to perform at Mesa Arts Center on Monday, November 21, and Tuesday, November 22. Evan Zimmerman
We’re mere days away from the official start of the Valley’s holiday season. As such, this week’s rundown of the best things to do locally includes a few seasonal events, including the Phoenix Zoo’s popular ZooLights attraction. Other noteworthy events include performances by the enigmatic Blue Man Group, a screening of Alfred Hitchcock’s 1960 classic Psycho, and the latest chapter in the Suns/Lakers rivalry.

Read on for more details or click over to Phoenix New Times’ online calendar for more things to do this week.

Blue Man Group, the enigmatic trio of body-painted performance artists, will return to the Valley this week on their current tour. For the uninitiated, Blue Man Group put on an impressive show of controlled chaos and sensory bombardment using custom-built percussive instruments, comedic moments, colorful antics, and unique audience interactions to entertain their crowds. The troupe has been around since 1987 (but still doesn’t include Tobias Funke in its cast) and will come to the Ikeda Theater at Mesa Arts Center, 1 East Main Street, for a two-night stint on Monday, November 21, and Tuesday, November 22. Performances are at 7:30 p.m. each evening and tickets are $38 to $78. Benjamin Leatherman

Devin Booker's romance with Kendall Jenner has some fans convinced it's extended the Kardashian Curse to the Suns.
Christian Petersen / Getty Images

The Phoenix Suns’ ongoing rivalry with the Los Angeles Lakers goes back decades to the Showtime era of the late ‘80s when Kareem Abdul-Jabbar and Magic Johnson ran roughshod over the purple and orange gang. The Suns have dished out plenty of payback to L.A. over the years, including trouncing LeBron James and company in 2021 en route to Phoenix’s first NBA Finals appearance in 18 years. This week, the latest chapter in the rivalry will unfold when Phoenix hosts L.A. on Tuesday, November 22, at Footprint Center, 201 East Jefferson Street. The Suns (10-6) are currently riding high atop the Pacific Division while the Lakers (5-10) are dwelling in the cellar. Tipoff is at 8 p.m. Tickets start at $64. Benjamin Leatherman
click to enlarge 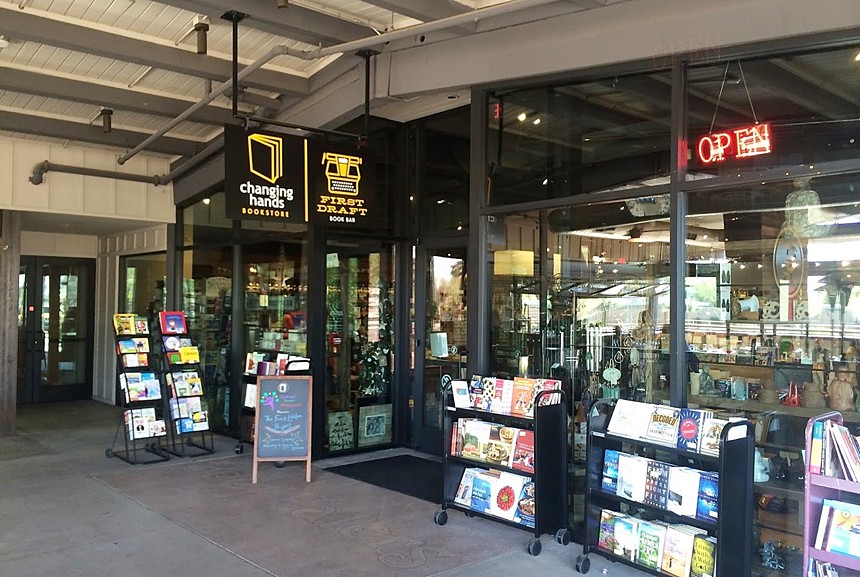 Writers Jana Bommersbach and Bob Boze Bell are certifiable experts in Arizona history. And we should know, considering both were esteemed contributors to Phoenix New Times once upon a time. More recently, the pair collaborated on Hellraisers and Trailblazers: The Real Women of the Wild West, a 126-page book chronicling notable female figures who “held it all together with grit and spit” in the old west. Bommersbach and Bell will share stories from their book at 6 p.m. on Tuesday, November 22, at Changing Hands, 300 West Camelback Road. Admission is free but masks are required. Benjamin Leatherman

Here’s a bit of localized Alfred Hitchcock trivia for y’all: The legendary director’s 1960 classic Psycho (widely considered to be one of the first slasher flicks ever) begins with a sweeping panoramic shot of the downtown Phoenix skyline, including views of Hotel San Carlos, Heard Building, and the Westward Ho. So attendees of this week’s screening of the film at the Orpheum Theatre, 203 West Adams Street, on Tuesday, November 22, will get some vintage views of our fair city before being swept up in the twisted tale of Norman Bates, the ultimate mama’s boy. The Orpheum will make for a fitting venue to catch Psycho, as it originally showed the film locally after its initial release 62 years ago (back when it was known as the Paramount Theatre). The screening starts at 6:30 p.m. Tickets are $16 for adults and $11 for children 12 and under. Benjamin Leatherman

Lights are pretty much everywhere in the Valley during the holidays, from local businesses and landmarks to thousands of neighborhood homes. The Phoenix Zoo, 455 North Galvin Parkway, also gets into the illuminated fun with its annual ZooLights spectacle, which sees the attraction adorned with 3 million glowing LED bulbs, as well as 3D sculptures and various light displays. This year’s edition of ZooLights, which officially opens on Wednesday, November 23, includes a “wildlife lantern safari” and a 50-foot-tall digital tree that will float on the zoo’s lake. Nightly hours are from 5:30 to 10:30 p.m. ZooLights will run through January 15 and tickets tend to sell out quickly. General admission is $30 online or $35 at the zoo. Children 2 and under are free. Tickets and more information is available on the Phoenix Zoo website. Benjamin Leatherman

Burning Thanksgiving meal calories after you eat them is so old-school. Get ahead of the game at the annual Phoenix Turkey Trot on Thursday, November 24, at Wesley Bolin Memorial Plaza, 1700 West Washington Street. It’s a family-friendly race with scenic 5K and 10K routes around downtown Phoenix for both adults and a those 17 and under. There’s also a one-mile “gobbler dash” for folks who want a shorter run, a “tot trot” for kids 6 and under, and a costume contest with prizes in such categories as “best-dressed turkey” and “most creative.” Registration fees range from $8 to $50 depending on the particular race and when you register. Race times vary. Participants will get a shirt, a finisher medal, and other perks. Complete details regarding fees, times, and other information are available here. Lynn Trimble
KEEP PHOENIX NEW TIMES FREE... Since we started Phoenix New Times, it has been defined as the free, independent voice of Phoenix, and we'd like to keep it that way. With local media under siege, it's more important than ever for us to rally support behind funding our local journalism. You can help by participating in our "I Support" program, allowing us to keep offering readers access to our incisive coverage of local news, food and culture with no paywalls.
Make a one-time donation today for as little as $1.