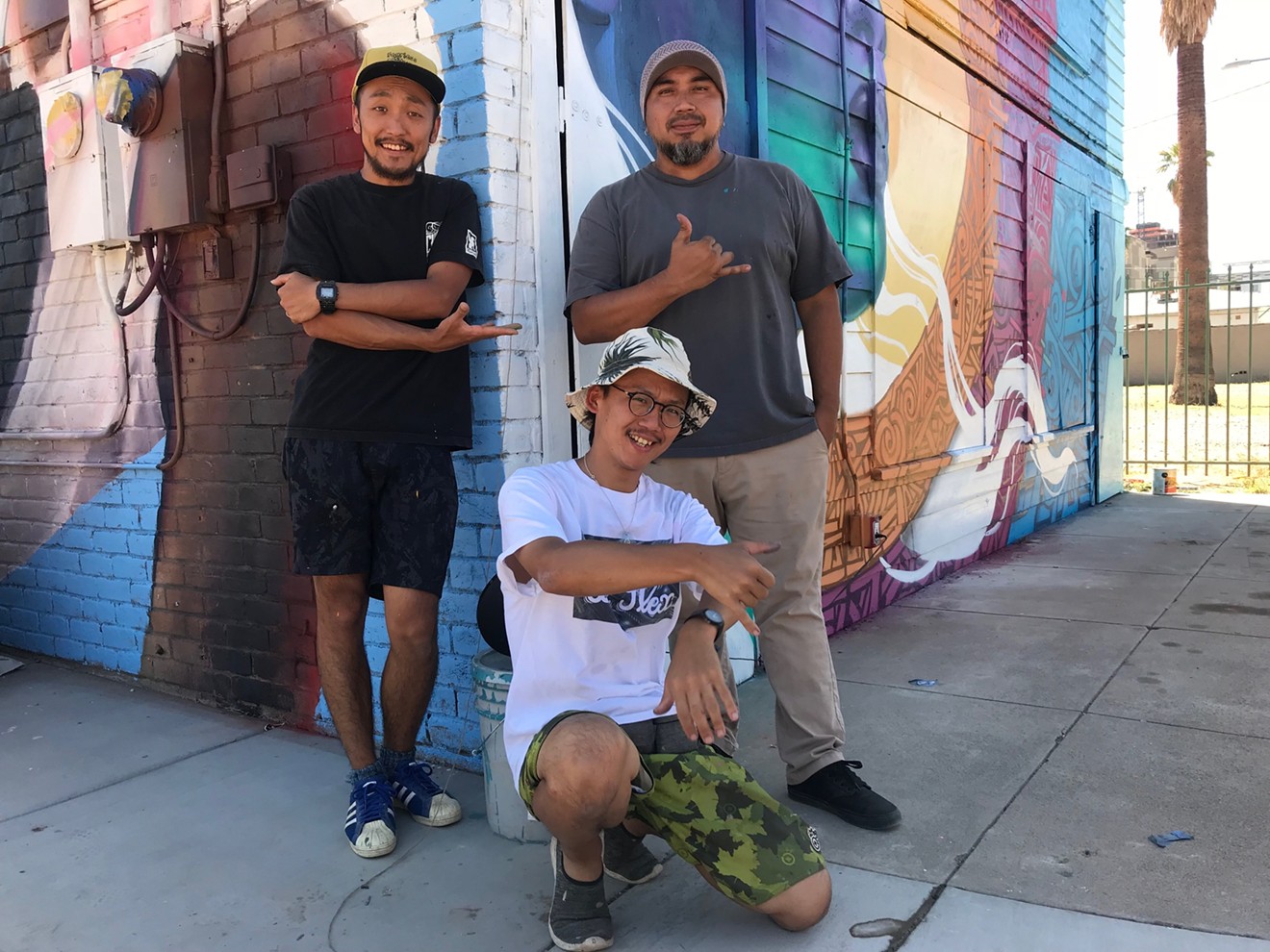 The first project, called Mural Exchange Vol. I, happened recently at the historic Pemberton house in Roosevelt Row. Other exchanges will follow, as Breeze continues to curate the initiative.

“They’ll be mural projects of the highest caliber,” Breeze says. “We want to do organized, civilized work that puts this place on the map.” Breeze points to other mural projects that garner good press for their cities, such as Hawaii’s Pow!Wow! and Denver’s Crush Walls.

Their current canvas was built around 1920, and named for Sarah H. Pemberton, widow of Thomas Pemberton, who was CEO of the predecessor to APS. It’s been on the Phoenix Historic Property Register since 2004.

Breeze is one of four artists who painted the exterior of the home, which is located at 1121 North Second Street. Nyla Lee Bevel, another Phoenix-based artist, worked with Breeze on two of the four walls.

Checking out WHOLE9's imagery while the Pemberton mural was still a work in progress.
Lynn Trimble
Two remaining walls were painted by WHOLE9, which comprises two Japan-based artists who work under the all-lower-case names hitch and simo. Both hail from Osaka, where they began painting together in 2007.

Both pairs of artists painted portraiture surrounded by abstract designs. For Breeze, the design references the intricate basketry patterns of his Tohono O’odham ancestors.

The mural was commissioned by True North Studio, a Phoenix-based company with offices at the monOrchid building on Roosevelt Street. True North is in the process of acquiring the historic home.

It’s headed by Jonathon Vento, who is part of the small team creating a mixed-use development called Ro2 at Second Street north of Roosevelt Street.

He’s also a founding partner with a Tokyo-based firm called Blue Energy Partners. Longtime downtown Phoenix advocate Dorina Bustamante, who recently moved to Roosevelt Row, works as a consultant with True North. And she’s been a key player in bringing the project to life.

They’ve been talking for more than a year about launching a mural project that would highlight the quality of Phoenix artists, and help to combat negative stereotypes about the city and state caused by anti-immigrant policies.

“Art is the tool to combat that,” Breeze says.

Nyla Lee Bevel and Breeze's work in progress at the Pemberton house.
Lynn Trimble
But there’s something else they hope to overcome, as well.

It’s the troublesome reputation of an earlier project Breeze spearheaded, which was called Paint PHX. The mural festival happened annually from 2014 to 2016, but was marred by graffiti vandalism in Roosevelt Row.

“I was disappointed with how some people blamed Breeze personally for things that happened outside his event,” Bustamante says.

Paint PHX was open to practically anyone who could get permission to paint a wall, because Breeze wanted it to be inclusive. It featured several well-known artists, including Hong Kong-based Caratoes and Hawaii-based Mung, as well as Phoenix-based artists such as Lalo Cota, JB Snyder, and Tato Caraveo.

But now, Breeze is taking a different approach.

The Mural Exchange Vol. I is basically a pilot for making it happen.

This time around, Breeze will curate a series of distinct mural exchanges rather than a single large-scale event, with a focus on quality rather than quantity. He’s eager to balance the number of local and international artists, as well as the number of male and female creatives.

When Vento decided he wanted a colorful mural featuring women’s faces, Breeze knew just who to call. Bevel is an emerging artist, who has painted about seven murals in and around downtown Phoenix during the past year or so. Typically, she includes a woman’s face, created with a bright palette.

“I really like the essence of a woman glowing,” Bevel says of the woman she’s painting at the Pemberton house. “She’s a glowing goddess shining from within.”

WHOLE9 incorporated the image of a Phoenix woman named Sakura. In Japan, artists rarely paint people’s faces on buildings, hitch says. So, doing the portraiture on this mural was a real treat.

Nyla Lee Bevel pauses from painting part of the home's exterior with Thomas "Breeze" Marcus.
Lynn Trimble
Of course, this isn’t the only mural project to take place in Phoenix this year.

The Oak Street Alley Mural Festival in the Coronado Historic District brought together artists and community members for a single day in March, and a three-day event called the Phoenix Mural Festival took place in various Phoenix neighborhoods in May.

The Phoenix Mural Festival, organized by artist and designer Danielle Fouschee, paired artists with residents and business owners wanting murals. But some homeowners in the Willo Historic District decried the results, prompting the city to call a meeting about whether murals should be regulated.

That wasn’t an issue at the Pemberton house, where the mural was finished over the weekend.

They were especially excited about painting here in Phoenix, where there’s so much open sky, and massive monsoon cloud formations. “It’s harder to see the sky in the concrete jungle in Osaka,” simo says. “We’re impressed with how it looks so different every day here.”

Correction: An earlier version of this article incorrectly stated the name of the company that commissioned the mural project. It is True North Studio, not True North Holdings.
KEEP PHOENIX NEW TIMES FREE... Since we started Phoenix New Times, it has been defined as the free, independent voice of Phoenix, and we'd like to keep it that way. With local media under siege, it's more important than ever for us to rally support behind funding our local journalism. You can help by participating in our "I Support" program, allowing us to keep offering readers access to our incisive coverage of local news, food and culture with no paywalls.
Make a one-time donation today for as little as $1.