J.B. Snyder's The Allery Has Closed in Downtown Phoenix — Here's Why 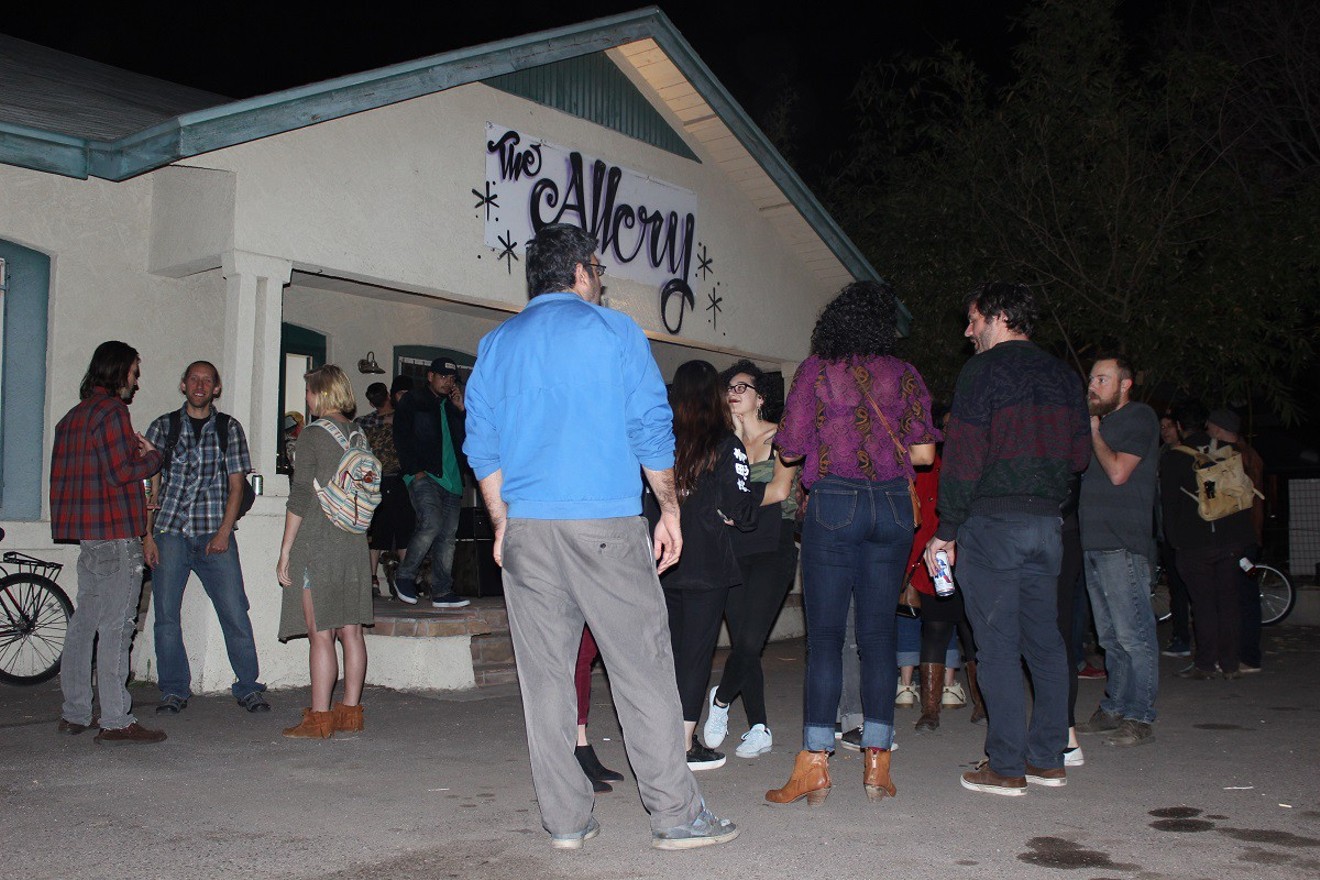 Snyder announced the closure on the Facebook event page for the exhibition that same evening. "So as the way of the world works tonight will be our last opening at the gallery," part of Snyder's post read. "Our studio/gallery is being rented to someone with deeper pockets."

Michael Elliot owns the bungalow, as well as three other properties on Fourth and Fifth streets just south of Roosevelt Street. Elliot says he hasn't rented the space out yet. But he plans to, and says it will be easier to fix up and show prospective tenants once it's empty.

"I told J.B. on Friday to have everyone move out and clean up the space because I'm going to rent it," Elliot says.

Artist J.B. Snyder in the backyard of The Allery on February 21.
Lynn Trimble
By "everyone," Elliot means the six other artists with studio space either inside the bungalow or in large storage containers in the back yard. The yard sits just west of the Fifth Street alley that's filled with murals and graffiti. In addition to Snyder, the space housed studios for Colton Brock, Tato Caraveo, Zachary Dean Glover, Sean McArdle, Frank Picazo, and Cota. (Others who've had studios there in the past include Mikey Jackson and Pablo Luna. )

Elliot is planning changes for at least one of his other Roosevelt Row-area properties. For more than four decades, he has owned Draperies by Muriel, located just north of The Allery. He hopes to rent that space, too, which means he'll relocate it. The time is right, Elliot says, because Roosevelt Row is undergoing such significant development. 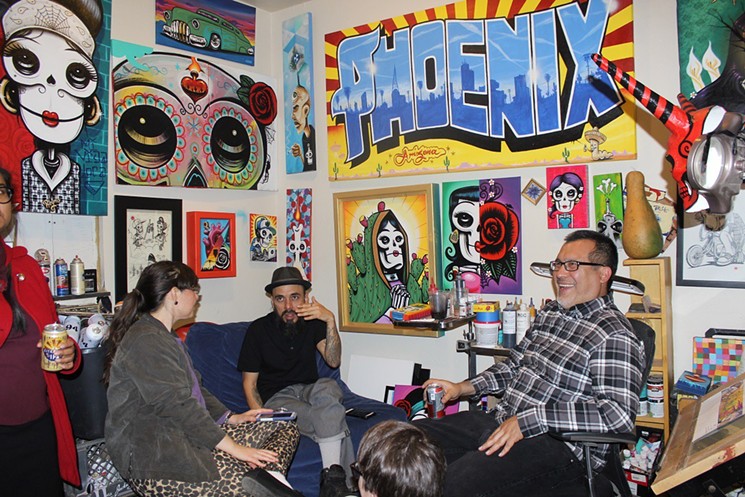 Phoenix artist Lalo Cota (right) relaxing in his studio during February Third Friday 2017.
Michelle Sasonov
Although Snyder says Elliot hasn't given them a timeline, Snyder hopes to get everything moved out within a week or so. On Monday, February 20, Brock was already busy clearing out his gear.

Snyder confirms that Elliot doesn't charge the artists rent, but says the artists have done some improvements like ripping out old carpet, and paid the electricity bill.

Artists have been using the space for several years, Elliot says. "I figured having artists there would keep other people from tagging the place," he says. 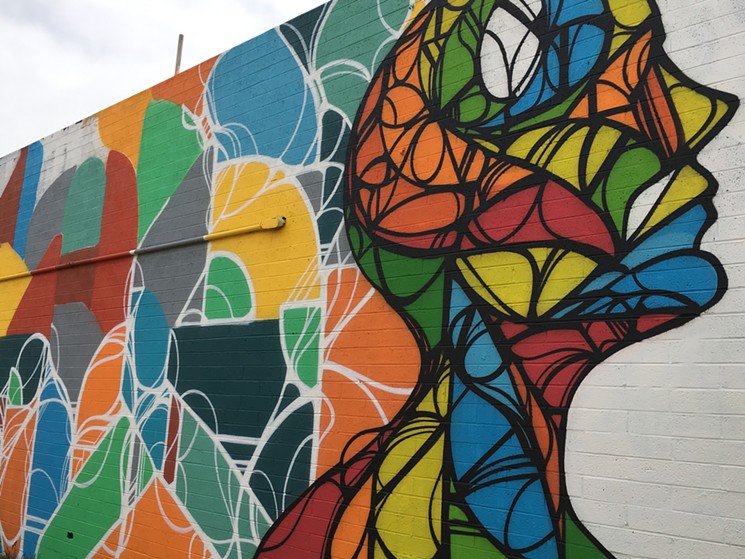 J.B. Snyder work in progress during 2016 for a collaborative mural with Tato Caraveo and Colton Brock that's nearly finished.
Lynn Trimble
And they've provided artwork free of charge, Elliot says. Brock, Caraveo, and Snyder painted a massive mural across the north-facing wall of Elliot's drapery business. "It was a two-way street," Elliot says of the arrangement. "The artists got exposure that helped their careers, and I got benefits out of it, too."

Snyder says he's known all along that Elliot could decide to rent out the space at some point. But that didn't make getting the news any easier.

For Snyder, losing The Allery feels like a triple whammy. Last year, Snyder had to close his Fifth Street Paint Supply business, located inside another Roosevelt Row bungalow. Purchased by Chandler-based Desert Viking, the bungalow will be part of a mixed-use development called The Blocks of Roosevelt Row. And Snyder is concerned he might not have a place to live after the end of March, when one of his roommates is moving out of a shared house near the Arizona State Capitol.

“I’m trying to stay positive, but between losing my home and my shop last year, now losing my studio, not much faith left in this city,” Snyder says. “It’s been setback after setback here."

Back of the bungalow that's been home to The Allery for more than two years.
Lynn Trimble
The Allery is the latest art space to close in the Roosevelt Row arts district in downtown Phoenix, where high-rise apartments and mixed-use developments are significantly shifting the urban landscape. Lotus Contemporary Art and Five15Arts closed last year, after Desert Viking bought the Flowers building where they were tenants. Both galleries have since relocated, but that’s not the end of that story.

Small businesses have been forced out, too, due to new ownership of spaces they rented. Kenny Barrett and Joshua Hahn announced in October 2016 that they’d have to leave the bungalow that housed their Roosevelt Growhouse and GROWop Boutique. For now, Roosevelt Growhouse has temporarily relocated to the Knipe House property. And its onetime neighbor, Treeo gallery, closed after Stacey Champion decided to move her consulting business to the The Funk Lab on Grand Avenue. J.B Snyder mural (right) on the monOrchid building in downtown Phoenix, where people often pause to take pictures with his art.
Lynn Trimble
Snyder has been a significant presence in the metro Phoenix art scene, in part because of his prolific mural painting, and his frequent collaborations with other artists. He's best known for murals featuring complex lines and blocks of bold color.

In 2016, Scottsdale Public Art commissioned Snyder to create a mural for a retail hub called Scottsdale Quarter, and his work also graces the exterior of Create Academy in Phoenix. Recently, he updated his small mural on an east-facing exterior wall of the monOrchid building, where people often pose for pictures with his work. Snyder's fine art has been featured in many exhibitions, including Randy Slack's annual "Chaos Theory" show at Legend City Studios.

Snyder has also done work in other cities, including several murals in Denver, where he wouldn't mind living if it looks like relocation is the best option. "We'll make it work," Snyder says of moving forward. "If I don't find a studio here by the end of March, Denver is a good possibility."