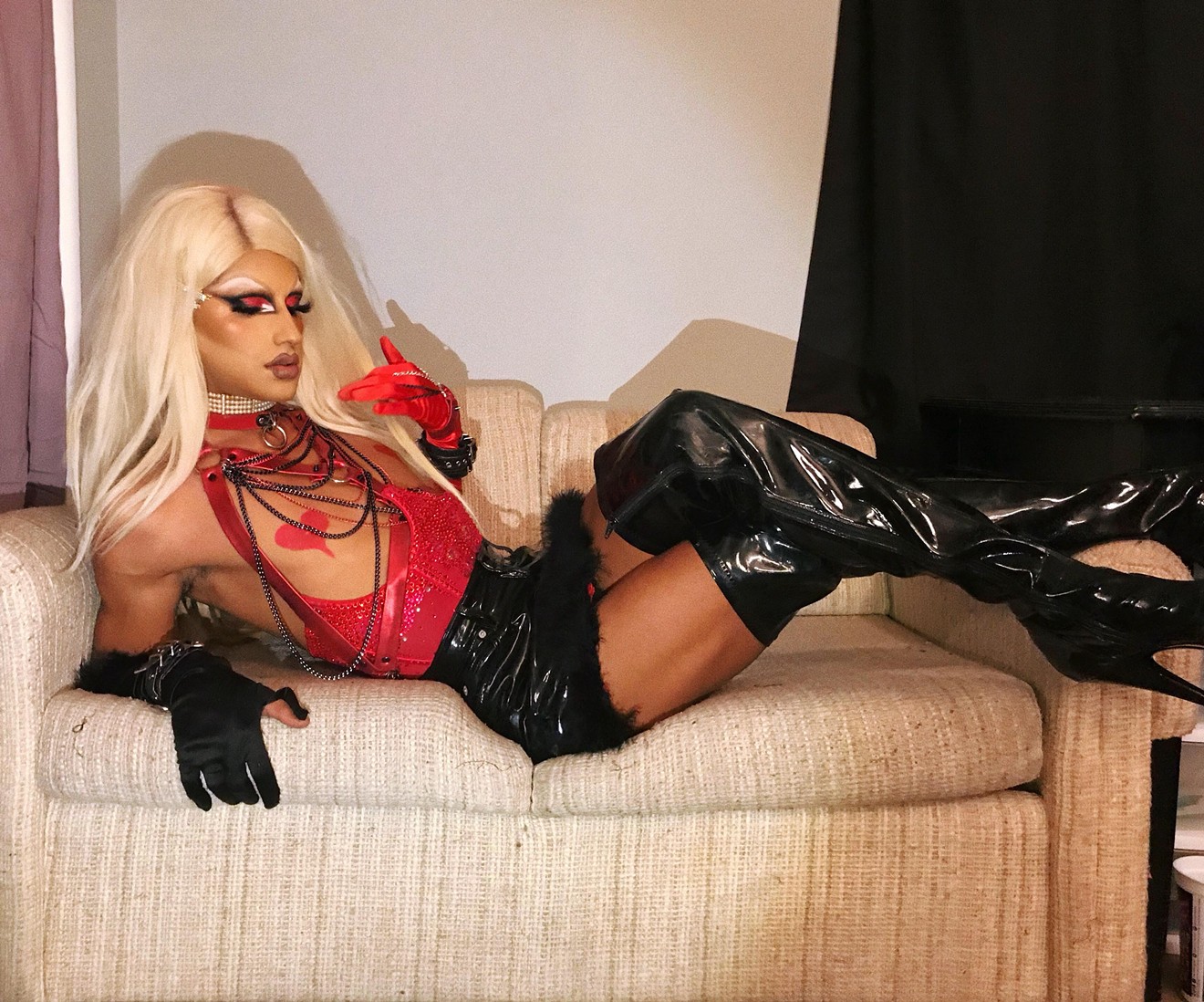 Cuntress loves high heels, glitter, and being shady. Vera Saucy
On Thursday, June 7, a new queen was announced as the winner of Club Volt’s drag competition, . The contest, which was called FACE in its first two seasons, anointed its third winner, Cuntress — also known as Alejandro Ruiz out of drag. Cuntress won a prize package including cash, paid bookings, and notoriety. The first two winners — Toothpick and Mynx Demilo — have gone on to become two of the most prolific drag queens in the Phoenix scene, with Toothpick now serving as a resident DJ at Club Volt.

So, who is Cuntress? Phoenix New Times spoke with the newly crowned winner to discuss her looks, attitude, come-up, and future.

Phoenix New Times: When did you first start doing drag? What started your interest?
Cuntress: I first started around three months ago. My drag mom, Benaddiction, is my partner’s best friend — his name is Ben. He had a birthday party in Mexico, and because he does drag, he wanted everyone to go out in drag that night and dress to the 10s. So, we did and seeing him put makeup on me, I was like, “Whoa, this is really cool and I feel like I could do this well,” because I consider myself artistic. When I was in drag, I started acting very differently naturally. This different side of me came out and I was embracing a part of me that I’ve never really embraced. That lit the fire for me, and I wanted to feel that feeling again. When I got home from Mexico, I bought all of the makeup and started doing it myself. Since then, I’ve just been practicing every week, if not painting myself, painting for a friend or painting my sister. About one month into that, I decided to perform and it’s all been uphill since then.

How did you find this Cuntress alter-ego and what is she like?
So I came up with Cuntress while playing a game. The point of the game was to be shady — we were given a certain topic, and would give a response, and then friends would choose which they liked better. and my friends would get really shady. I remember one time one of my friends turned around was like, “You’re such a cunt when you play this game.” So the next time, I put my name as Cuntress because I liked this shady diva I was when I played the game. Cuntress is a further extension of this diva that’s a princess but also a badass bitch. As a boy, I can't really express that because she’s very feminine, so it’s allowed for me to embrace my femininity. Cuntress is Alejandro, just amplified and as a woman.

How does that come across in your drag?
My drag first starts with my makeup, because I feel like Cuntress is very visual and you can tell what type of girl she is by looking at her face. I like to paint very sharp lines, high-raised eyebrows; a permanent bitch face on my mug. It starts from there, the attitude and the bitch face. I like to dress in exposing genderfuck looks — I never wear boobs and I like to show my boy nipples, but I’ll be padded with a girl booty, thigh highs, and a wig. It’s very androgynous and I like to incorporate that into my music. I love this song called “Sugarboy” by St. Vincent or “Tell Me Does She Love the Bass” by Lesbians on Ecstasy. I like very dark, house music with a beat to it. That’s the kind of music Cuntress is all about: very upbeat, sexual, dark, and liberated.

Which drag queens inspired this persona?
Definitely my drag mom. Benaddiction has a huge influence on my drag. Vera Saucy, another local queen here, she’s very alternative and super-cool. Her performances are always super out there and sexual, but have a meaning to them, and have a goal to try to get the audience to think. [RuPaul’s Drag Race winner] Violet Chachki, too, with her bondage fashion wear, latex, and glamour. I love glamour. One thing I always incorporate with Cuntress is glitter. She’ll never go out without glitter all over her chest or eyes. She’ll always have something that sparkles. Cuntress is dark but super-glamorous. She’ll draw you in with the darkness and surprise you with the glamour.

Another huge influence for my drag is Sharon Needles and her alternative perspective on drag. I like spooky drag than I do beautiful drag. The show Dragula is also a huge influence — Vander Von Odd and Dali, who's also in Phoenix. Their makeup is super intense and dark, but very glamorous. I love something that can scare you away and draw you in at the same time.

What was the process of like?
FACE LIFT, well, from the previous seasons I didn’t think was going to be too much of a competition. But this season was the largest turnout of auditioning queens. We had the largest cast they’ve had — eight. The amount of talent from these queens was insane, so they really had to amp up the competition. They were like, “Wow, we really need to give these queens a platform to compete and show off their skills and art.”

FACE LIFT developed a finale that consisted of three rounds. The first round was , where we had to rock a runway with something that really represented who we were. The second category was a lip-sync of our choosing, using props. Then, they incorporated a third round called “lip-sync suicide.” We had no idea what song it was, and we lip-synced for a minute. It was important to do well on each round.

So, that was sort of my process: What can I wear to show off Cuntress? What can I wear to wow the audience? What would be a cool review? I had to put together things that I thought would translate well. And, another thing, going into this competition, I didn’t dance. I’m more of a look queen and I’m all about the outfits and makeup. So, this competition made me go out of my comfort zone. I had to lip-sync and dance, so that was something new for Cuntress. She had to learn how to put on a good show and turn it out, especially in huge heels.

How did you learn how to dance?
I would go to drag shows. I went to the Queer Agenda every week for like five weeks, back-to-back. I would go with my phone, sit front row and record the performances. I would see how they moved and the things they would do. I would go out with my drag mom, and record videos of her dance moves and try to re-create them at home. YouTube was a huge help on how to vogue and all of the cute little tutorials. That’s how I started my dancing: watching other queens, recording them and trying to recreate them in my own way.

What are the next steps for Cuntress?
I’m going to try and expand my drag. I want to go on tour with What the Queer, an alternative drag-based show that’s going to be traveling, so Cuntress wants to do that. Cuntress wants to explore different clubs around The Valley, maybe do a drag brunch. I want to take Cuntress all the way there, go the full nine yards with her. And maybe do Drag Race one day!

Cuntress' next performance is at Club Volt, 3108 East McDowell Road, on Tuesday, June 26. Cuntress will be performing alongside Aquaria, a finalist in this season of RuPaul's Drag Race. The show starts at 10 p.m. Tickets are $25 with a meet-and-greet option available for an extra $10.

Season four of FACE LIFT begins Thursday, June 21. For information about the show, visit Club Volt's Facebook page.
KEEP PHOENIX NEW TIMES FREE... Since we started Phoenix New Times, it has been defined as the free, independent voice of Phoenix, and we'd like to keep it that way. With local media under siege, it's more important than ever for us to rally support behind funding our local journalism. You can help by participating in our "I Support" program, allowing us to keep offering readers access to our incisive coverage of local news, food and culture with no paywalls.
Make a one-time donation today for as little as $1.