Phoenix Greyhound Park Is Being Demolished — Here’s What We Know The current state of the Phoenix Greyhound Park's grandstand, which is being demolished. Benjamin Leatherman
The Valley has lost any number of major landmarks over the past few years. Iconic structures like downtown Phoenix’s Hotel St. James, sprawling retail complexes like Metrocenter and Paradise Valley Mall, and famed Tempe restaurant Monti's La Casa Vieja have all been shut down or torn down before fading into local lore.

You can add Phoenix Greyhound Park to the list, as the historic dog track located at Washington and 38th streets is currently in the process of being demolished. For the past couple of weeks, workers from Gilbert-based Breinholt Contracting Company have been tearing down the enormous grandstand on the 60-acre property, which has been owned by the city of Phoenix's Aviation Department since 2007. (Phoenix Sky Harbor International Airport is located immediately north of the park.)

It’s a mercy killing in a sense, as the grandstand and dog track has been vacant and blighted since the park closed in 2009 after 45 years in business. And it shows every sign of abandonment: weeds and broken concrete were everywhere (even before demolition crews began their work) while the towering building’s paint job was long since faded.

Meanwhile, the parking lot has been anything but vacant, as it hosts the thriving Phoenix Park 'n Swap, a popular flea market that’s operated every Wednesday, Friday, Saturday and Sunday for decades.

The decrepit state of Phoenix Greyhound Park before crews began tearing down the place is a far cry from its glory days of the 1950s through the 1970s. Debuting in 1954, it was what author and journalist Jon Talton described as a “neon-lit palace where middle-class couples and compulsive gamblers mixed with the city's elite.” Crews have been demolishing the grandstand at Phoenix Greyhound Park since early February.
Benjamin Leatherman
Its grandstand was a stylish and gleaming glass, steel and concrete edifice with enormous panoramic windows looking out onto the oval track where speedy greyhounds chased after a mechanical rabbit. Out on Washington Street, the park's now-iconic (and long-demolished) green neon sign beckoned gamblers.

Horse and dog racing was a huge draw in that era, as it was the few options for gambling in the Valley. As many as five tracks operated in Arizona at one time, including Turf Paradise in north Phoenix.

“Betting was legal,” Talton wrote in a 2016 retrospective on Phoenix Greyhound Park. “And a pre-video-device audience thrilled to dogs racing chasing a mechanical ‘lure’ around the track. The park promised glamor, excitement, and was highly advertised.”

According to the Arizona Republic, Phoenix Greyhound Park would see more than 4,000 people turn out and bet upwards of $200,000 during a single night in the early 1970s.

Like numerous other dog and horse tracks, Phoenix Greyhound Park also had alleged ties with organized crime during its lifespan and reportedly was tied to the 1976 murder of renowned Arizona Republic journalist Don Bolles.

Talton’s retrospective delves into the murky links between dog and horse racing in Arizona, the mafia and the now-defunct Buffalo, New York-based sports conglomerate Emprise, which had a stake in Phoenix Greyhound Park and was being investigated by Bolles at the time of his death.

“Emprise was found to be associated with organized crime figures and convicted in Los Angeles of racketeering in 1972. … In Phoenix, Emprise had been a target of Bolles' investigative reporting and focus of a crackdown by the state racing commission in the early 1970s," Talton wrote. "Even so, the state allowed the company to keep its concessions, including at Phoenix Greyhound Park. Emprise's Phoenix partner was the Funk family. And it had friendly ties to Kemper Marley, the powerful land-and-booze baron always lurking at the edge of the Bolles murder.” 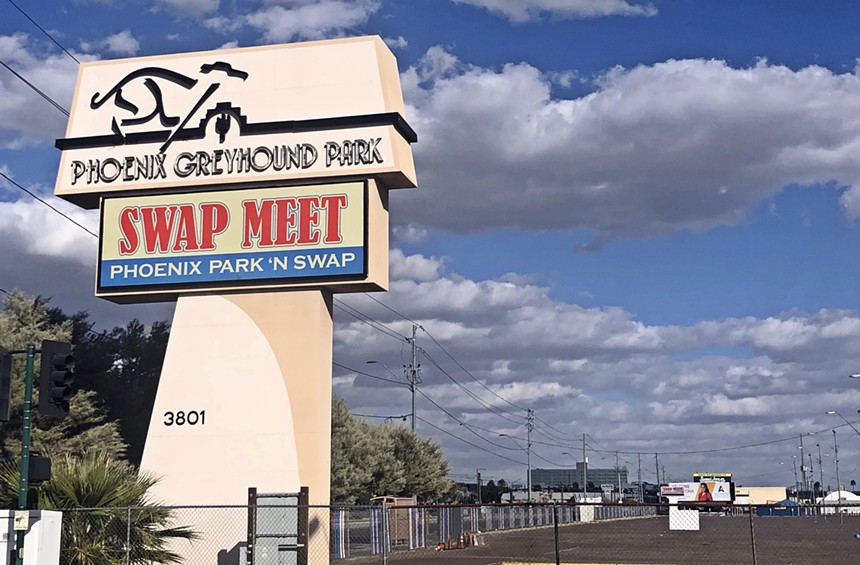 The sign for Phoenix Greyhound Park along Washington Street.
Benjamin Leatherman
Bolles’ reporting (and the work of various journalists who took up the investigation following his death) never definitely proved members of the Funk family were tied to organized crime. Per the Arizona Republic, the park was purchased in 1979 by New York-based Sportsystems Corporation, which later became multimillion-dollar food and beverage concessionaire Delaware North.

As time went on, the glory days of Phoenix Greyhound Park began to wane. The park’s popularity lessened as the influence of Las Vegas and the availability of legalized gambling at local Native American casinos grew in the ‘80s and ‘90s.

At the same time, there was an increasing outcry against the mistreatment of racing greyhounds at dog tracks, including Phoenix Greyhound Park, by animal rights activists. In 1992, the corpses of more than 100 greyhounds were discovered in a Chandler citrus grove, several of which were linked to a breeder connected with the park (who has since been banned from the trade). 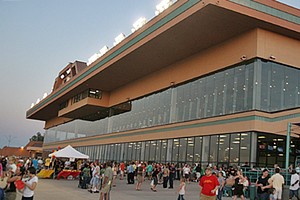 The grandstand at Phoenix Greyhound Park in 2008.
Phoenix New Times archives
By the dawn of the millennium, a handful of other local horse and dog tracks had closed, and Phoenix Greyhound Park was a shell of its former self. Crowds at the park had been declining steadily since the late ‘90s, per Arizona Racing Commission records.

The park was still a nightlife destination even in its twilight years, though. Copperstate Dinner Theater and local comedy troupes held performances in a 100-seat theater in the grandstand and sad-sack comedian (and onetime Valley resident) Neil Hamburger also recorded his 2003 video Live at the Phoenix Greyhound Park at the venue.

By 2006, the park’s annual revenues fell to $14 million, according to the Phoenix Business Journal. It was sold to the city of Phoenix’s Aviation Department the following year. There’s been no word on what its future plans are for the property. (Phoenix New Times was unable to reach the department for more information.)

Valley residents have had a mixed reaction to news of the Phoenix Greyhound Park’s demolition. A recent post to the popular Vintage Phoenix group on Facebook featuring a video of the grandstand being torn down included comments ranging from nostalgia to outright disgust.

One person wrote about how they “had some fun times there” and was “sad to see her go,” while another Vintage Phoenix was blunt about her feeling for the park.

“Good riddance! One less animal abuse monument,” they wrote. “Gone for good.”
KEEP PHOENIX NEW TIMES FREE... Since we started Phoenix New Times, it has been defined as the free, independent voice of Phoenix, and we'd like to keep it that way. With local media under siege, it's more important than ever for us to rally support behind funding our local journalism. You can help by participating in our "I Support" program, allowing us to keep offering readers access to our incisive coverage of local news, food and culture with no paywalls.
Make a one-time donation today for as little as $1.