Creating a little ambiance outside the museum.
Lynn Trimble

The weekend is almost here, and there is a special bonus: Leap Day. Check out the PHX Vegan Food Festival, enjoy a conversation with NPR host Diane Rehm, or visit the Melrose Vintage Market with the one extra day this year. As always, stay up to date with the Phoenix New Times' event calendar. 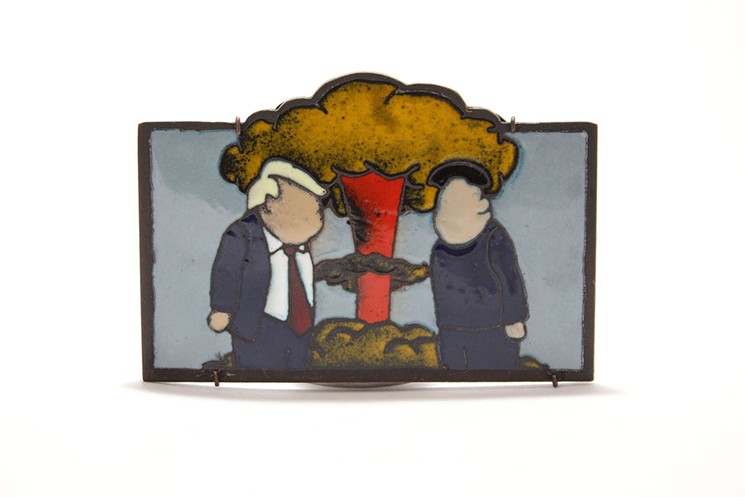 If you hear the word “crafts” and think Popsicle sticks or pipe cleaners, it’s time to hit your reset button by heading to Mesa Contemporary Arts Museum, 1 East Main Street in Mesa. Its free 41st Annual Contemporary Crafts Exhibit includes an intriguing mix of artworks from wearable sculpture to ceramics. The exhibit features work by more than 50 artists, and more than half are based in Arizona.

One artist used discarded sneakers to make a small sculpture anchored by the form of a human heart. Another used copper, enamel, and spring steel to depict two world leaders flanking a nuclear mushroom cloud. Check it out on Friday, February 28, when museum hours are 10 a.m. to 5 p.m. The exhibit continues through April 19. Lynn Trimble Pick up some books or zines while you're there.
Lynn Trimble

Palabras Bilingual Bookstore, 1738 East McDowell Road, is giving queer voices a safe space to share their work with a Queer Poetry Salon happening from 6:30 to 8:30 p.m. on Friday, February 28. It’s being hosted by Equality AZ, a nonprofit that works to improve the well-being, inclusion, and political power of LGBTQ community members.

The free event will include readings by featured poets, plus time for other queer writers to share their work. Any LGBTQ writer can share two short pieces during the open mic period. Organizers describe the gathering as a “test lab for queer literature” designed to help grow the queer community. Lynn Trimble

Tempe Empty Bowls is as much a community event as it is a marriage of activism and the arts. Attendees can spend $10 to purchase handcrafted ceramic bowls made by schoolchildren, artists, and potters from the city of Tempe Ceramics Program. Then they can have a bowl of bread and soup, symbolizing the “caloric intake that must sustain many in our community for an entire day.” In addition to generating much-needed awareness, proceeds will benefit the United Food Bank and Tempe Community Action Agency. There will also be other items for sales including vases, pots, mugs, and necklaces.

Despite what Liz Lemon declared in 30 Rock, Leap Day is most definitely a thing. Thanks to a quirk of the Gregorian calendar, the world gets an extra day every four years to do with as it pleases. While you don’t have to dress up in blue and yellow or give out candy in exchange for children’s tears, there will be some parties celebrating the occasion.

The folks at Pho Cao, 7436 East McDowell Road in Scottsdale, are planning a Leap Day 2020 party on Saturday, February 29, with live music from local artists and acts like Roger Dabsworth, The Psychelephants, and the Benja Bloom Band. The party starts at 7 p.m. Admission is free, but donations for the bands are appreciated. Call 480-947-2608. Benjamin Leatherman

Depending on your level of baseball nerdom, you may or may not have heard of pitcher Ford Smith. If not, his story is worth knowing. The late Phoenix native competed in professional baseball’s Negro Leagues, which launched in 1920 and consisted solely of African-American players. Smith competed with the league’s Kansas City Monarchs for four years in the ‘40s, playing alongside the legendary Satchel Paige and starting the 1947 Negro World Series.

Smith’s achievements on the baseball diamond will be commemorated during Arizona’s Negro Leagues Baseball Centennial Celebration on Saturday, February 29, at the George Washington Carver Museum & Cultural Center, 415 East Grant Street. The discussion will focus on our state’s ties to the leagues, including Smith, and feature baseball historians Bill Staples Jr., and Charlie Vascellaro, as well as onetime MLB outfielder Byron Browne. The discussion is from 2 to 4 p.m. Admission is free. Call 602-441-7516 or click the link above. Benjamin Leatherman

The PHX Vegan Food Festival returns to Hance Park, 67 West Culver Street, on Saturday, February 29. Expect more than 100 vegan and vegan-friendly vendors, as well as demonstrations, crafts, and entertainment. The festival will have several no-host bars where you can buy vegan-friendly beer, wine, or cocktails. Plus, they’ll have a kids’ area with special entertainment and hands-on activities.

The lineup also includes yoga classes and live music. After dark, look for lawn games, electric light shows, light-based performers, and glow-in-the-dark chalk art. General admission for the noon to 10 p.m. event is $29 in advance or $35 at the door. VIP passes are $69, which gets you into the festival at 10 a.m. Lynn Trimble

Some cities wait until the dead of summer to hold their annual beer fests. But that’s not the case in the Valley, as the first annual Cave Creek Craft Beer Festival debuts before spring has even arrived. The event features a massive sampling of breweries from Arizona and beyond, including Borderlands, Mike Hess, SanTan, Novo, Saddle Mountain, Wild Tonic, and Twelve Percent Imports. When you’re not chugging suds, there’s also live music by Lindsey Vogt and the promise of greasy, deep-fried pub food. Luckily, you can walk off those added calories on a nearby trail — talk about convenience.

The fest is set for 1 to 5 p.m. on Saturday, February 29, at Stagecoach Village, 7100 East Cave Creek Road in Cave Creek. General admission is $45, and VIP early access runs $60. Chris Coplan


The right-to-die movement isn’t making many headlines these days, as other issues from climate change to immigration are taking center stage. But the right to die is top of mind for Diane Rehm, best known for The Diane Rehm Show aired by NPR from 1979 to 2016. She has written a book based on interviews with terminally ill patients, family members, ethicists, physicians, and others.

Rehm will discuss her book at the Orpheum Theatre, 203 West Adams Street, at 2 p.m. on Sunday, March 1, during an event presented by Changing Hands Bookstore and KJZZ. The event is titled after the book: When My Time Comes: Conversations About Whether Those Who Are Dying Should Have the Right to Determine When Life Should End. For $33.18 plus fees, you get one ticket and a book. For $38.18 plus fees you get the book plus admission for two. Lynn Trimble Time to shop 'til you drop!
Lynn Trimble

Unless you already lived there, you may not know the cultural and historical value of the Melrose District. Every month, residents and local businesses put this vibrant area on display with the Melrose Vintage Market. The homegrown market features more than 50 local vendors selling wares ranging from clothing and decor to furniture and random “oddities,” with styles like prewar, deco, and Midcentury modern. Plus, there’s food and drink available, including local bakeries, as well as a KidZone featuring jump ropes and hula hoops. And if all that weren’t enough, there’s always dogs to admire and hopefully hug. This free event is set for 9 a.m. to 3 p.m. on Sunday, March 1, at 700 West Campbell Avenue. Chris Coplan
KEEP PHOENIX NEW TIMES FREE... Since we started Phoenix New Times, it has been defined as the free, independent voice of Phoenix, and we'd like to keep it that way. With local media under siege, it's more important than ever for us to rally support behind funding our local journalism. You can help by participating in our "I Support" program, allowing us to keep offering readers access to our incisive coverage of local news, food and culture with no paywalls.
Make a one-time donation today for as little as $1.
Chris Coplan has been a professional writer since the 2010s, having started his professional career at Consequence of Sound. Since then, he's also been published with TIME, Complex, and other outlets. He lives in Central Phoenix with his fiancee, a dumb but lovable dog, and two bossy cats.
Contact: Chris Coplan
Follow:
Twitter: @CCoplan