The Best Things We Saw During September Third Friday

Exploring one of David Bessent's sketchbooks at Gallery 119. Lynn Trimble
There were plenty of art offerings to choose from over the weekend, including the opening for the "Myths, Maps & Legends" exhibit in Tempe to the Arizona Dance Festival in Scottsdale. Here's a look back at three of our favorites. 'Celebrating the Life and Work of David Bessent'

Gallery 119 hosted the first solo exhibition featuring many of the works by David Bessent, an emerging artist whose works ranged from large-scale abstract paintings to small figurative drawings.

Fellow artists, friends, and community members viewed Bessent's work nearly a year after he and fellow creative Zachary Walter were tragically murdered in Roosevelt Row. The exhibit included hundreds of Bessent’s drawings and writings, created in various sketchpads and journals. They highlighted his fluidity in working with various mediums to convey the complexities of the human condition. 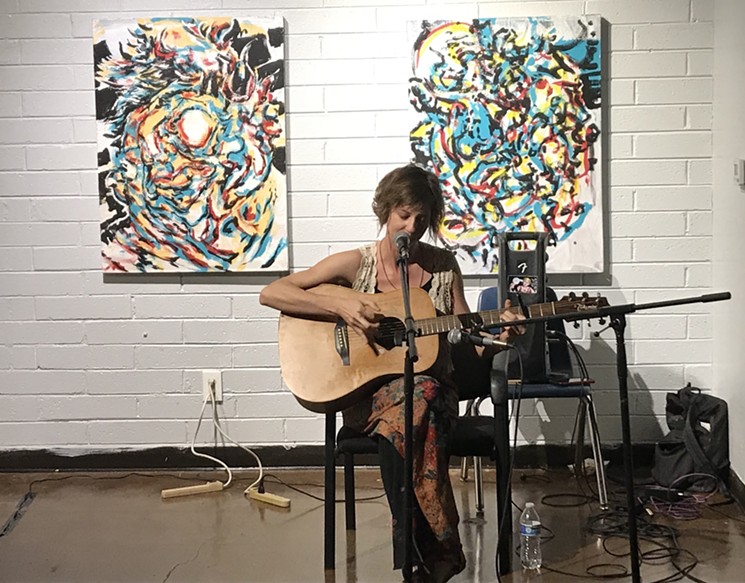 Live music performance during "Celebrating the Life and Work of David Bessent."
Lynn Trimble
Supporters are working to create a foundation dedicated to cataloging Bessent’s artworks and raising money for future grants for emerging artists. Seeing Bessent’s work exhibited in a gallery setting was a powerful reminder of his talent, the heartbreaking loss endured by his families, and the commitment of many to assure that Walter and Bessent are honored through their positive work in the community moving forward.

Getting a good look at Maggie Keane's Cellophane Girl at The Hive.
Lynn Trimble

For this seventh annual art show held at The Hive art gallery in the Coronado neighborhood of Phoenix, about two dozen creatives showed diverse artworks, including a lamp made with reclaimed redwood and a pair of Raku hearts.

Checking out eclectic offerings for the "The Coronado Art Show."
Lynn Trimble
Exhibition highlights included a new work by Maggie Keane, an artist best known to many for her massive Prince mural located just off Grand Avenue. Cellophane Girl, which features a Barbie-like doll wrapped in cellophane, harks back to a similar piece called Wrapture stolen five years ago from the same gallery space.

"The Coronado Art Show" always gets a big crowd.
Lynn Trimble
In a courtyard off the gallery, artists and community members gathered to enjoy food, conversation, DJ-spun tunes, and the season’s first hint of a cool fall breeze – reflecting the role the arts play in creating and fostering vibrant neighborhoods.

Although the walls inside Step Gallery were filled with works related to death, the atmosphere couldn’t have felt more alive as artists and others gathered for an exhibition thoughtfully curated by Ashley Czajkowski.

The "Mememto Mori" exhibit at ASU Step Gallery drew a nice crowd.
Lynn Trimble
The exhibit included several books filled with images and artifacts related to various ways cultures deal with death and dying – addressing the human experience of death, but also death as it occurs in the environment and other contexts. 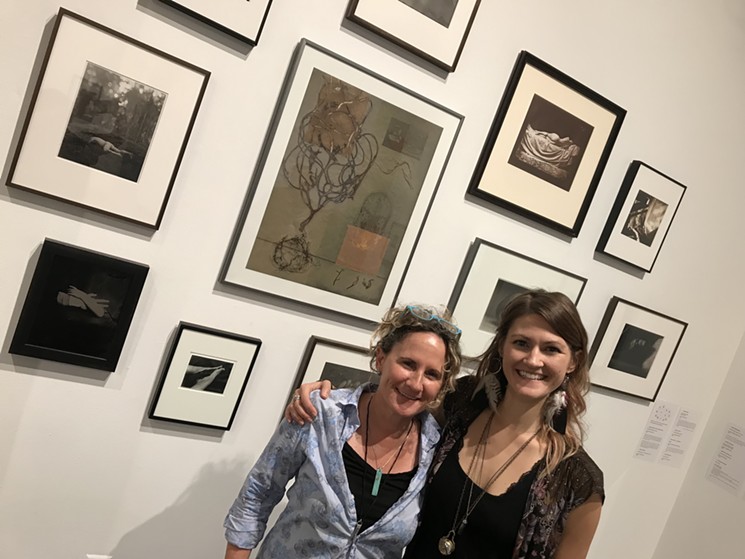 Catching up with photographers Melanie Craven (left) and Ashley Czajkowski.
Lynn Trimble
William LeGoullon showed photographs of found objects discarded by shooters who’d used them for target practice. Cherie Buck-Hutchison's work was comprised a death crown used for a cult’s death ritual placed inside covering printed with photographs. It was set it atop of a religious text read to those who lay dying. Collectively, exhibited works comprise a meaningful meditation on both life and death.
KEEP PHOENIX NEW TIMES FREE... Since we started Phoenix New Times, it has been defined as the free, independent voice of Phoenix, and we'd like to keep it that way. With local media under siege, it's more important than ever for us to rally support behind funding our local journalism. You can help by participating in our "I Support" program, allowing us to keep offering readers access to our incisive coverage of local news, food and culture with no paywalls.
Make a one-time donation today for as little as $1.