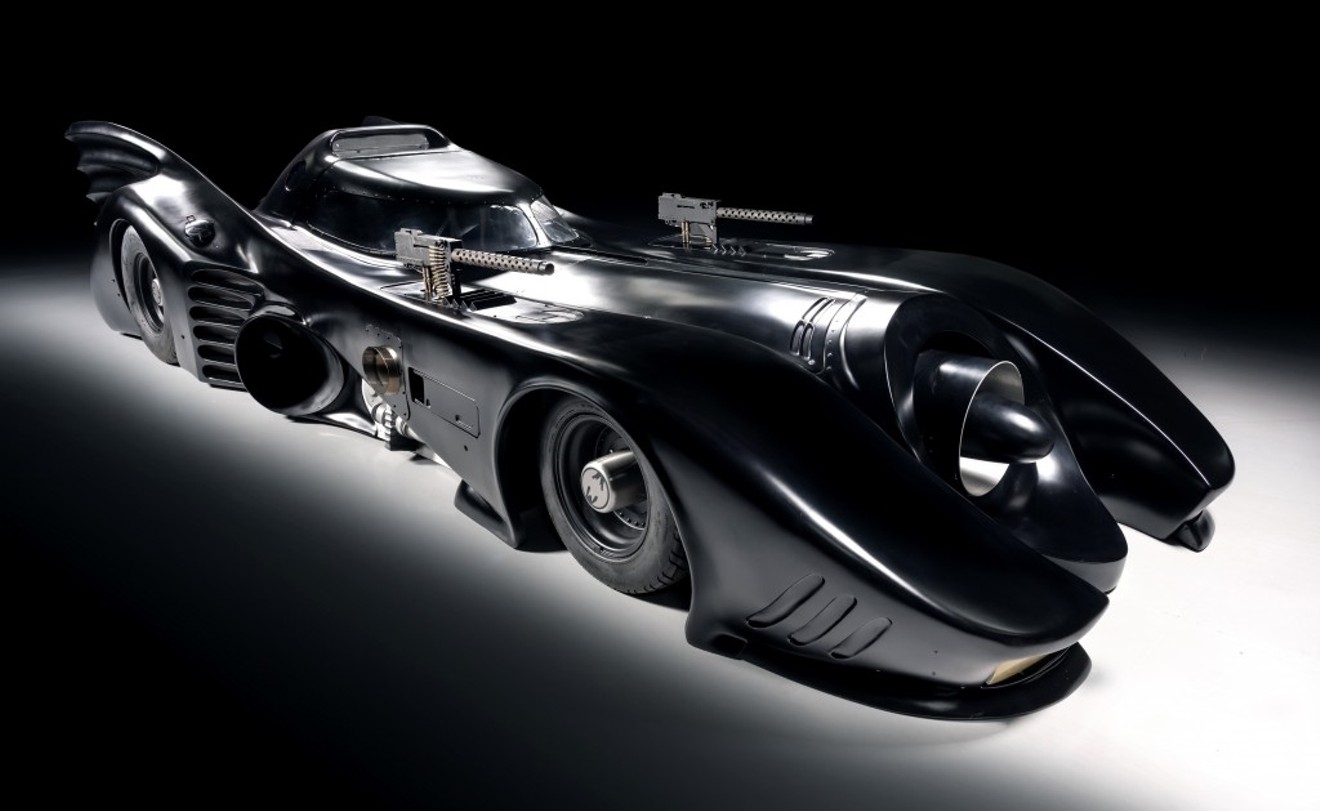 This year's Barrett-Jackson Scottsdale will feature a recreation of the Batmobile from 1989's Batman. Barrett-Jackson
The first thing you should know about the Barrett-Jackson collector car auction is you don’t need a six- or seven-figure income to enjoy it.

Just ask many of the 200,000-plus locals who motor up to WestWorld of Scottsdale for the nine-day-long event where more than 1,000 luxury, vintage, rare, and high-performance cars are auctioned off to the highest bidders each year.

While Barrett-Jackson is geared toward big spenders and discerning auto enthusiasts (last year’s auction topped $203.2 million in total sales), anyone can swing by and scope out all the automotive eye candy.

An expansive variety of vehicles is showcased at each auction, including high-end dream machines, unique rides, rare production models, and cars featured in Hollywood productions. This year’s Barrett-Jackson, which runs from Saturday, January 21, to Sunday, January 29, will include a recreation of the Batmobile from Tim Burton’s Batman films, a 1953 Oldsmobile 98 Fiesta convertible, a 2019 Lamborghini Aventador SVJ, and 1961 Volkswagen Microbus owned by actor Will Ferrell.

There’s also an exhibitor marketplace with hundreds of vendors, auctions of “automobilia," opportunities to ride in the latest hot rods, a vehicle parade, live music, BMX stunt shows, and the chance to do plenty of people-watching.

What else is set for the 2023 edition of Barrett-Jackson in Scottsdale? Before you motor on over, check out Phoenix New Times' guide to the event, which contains details on admission prices, discounts, activities, the biggest and best cars to see, and more.

When and Where Is This Year’s Barrett-Jackson Scottsdale?

This 2023 edition of the auction runs from Saturday, January 21, to Sunday, January 29, on the grounds of WestWorld of Scottsdale, 16601 North Pima Road.

What Are the Event Hours? A lot of big bids will be placed at the annual Barrett-Jackson collector car auction.
Melissa Fossum

That depends on when you’re going to attend. Ticket prices will vary depending on the day with prices increasing throughout the event’s run. (Basically, the opening weekend on January 21 and 22 will be the cheapest time to go and things get more expensive on the days leading up to the televised auctions). You can also save money by buying admission online a day or two in advance.

No. It's an all-ages event and both kids and families are welcome to attend. As we mentioned, children 12 and under can get in free with an accompanying paid adult admission during QT Family Day on Saturday, January 21.

Are Any Other Discounts Available? Where Can You Park?

Parking lots will be located within a short distance from WestWorld of Scottsdale (follow the signs telling you where to go) and shuttles will take people to and from the main gate of the auction. Valet parking is also available for a price. A designated dropoff point will also be available near the gate if you’re using a rideshare service to get there.

What Are Barrett-Jackson’s Security Policies?

Patrons can only bring clear plastic, vinyl, or PVC bags no larger than 12 inches by six inches by 12 inches or one-gallon clear plastic bags (clutch handbags that do not exceed 6.5 inches by 4.5 inches will be allowed). Anything bigger or not see-through is prohibited.

Security staff will check every patron and their bags at the entrance. Weapons, video cameras, drones, coolers, non-service animals, and skateboards won’t be allowed into the event. Outside food and beverages are also forbidden, but each patron can bring in one (1) sealed bottle of water no larger than 17 ounces.

Will Food and Drinks Be Available?

Of course. A food court with dozens of vendors, restaurants, and eateries will have eats and drinks available for purchase daily from 8 a.m. until the close of that day’s auction.
click to enlarge A replica of the 1930 Pontiac “Munster Koach” from The Munsters.
Barrett-Jackson

What Are Some of the Notable Cars Being Auctioned This Year?

Each year, Barrett-Jackson Scottsdale features a mix of automotive classics and rarities, celebrity-owned rides, high-priced supercars, one-offs, and vehicles made famous by Hollywood being auctioned off. This year will be no exception.

In the case of the latter, a few screen-accurate recreations of cars seen in movies and television shows will be up for bid, including epic replicas of the Batmobile from 1989’s Batman, Marty McFly’s 1985 Toyota SR5 4-wheel-drive pickup from the Back to the Future trilogy, and the kooky and spooky 1930 Pontiac “Munster Koach” from The Munsters autographed by actor Butch Patrick (a.k.a. Eddie Munster). A recreation of the 1963.5 Ford Galaxie 500 XL R-code from 2011’s Fast Five will also be available.

When it comes to rare rides, a fully restored 1953 Oldsmobile 98 Fiesta convertible (one of only 458 built), a 1966 Shelby Group II Mustang created for British race car driver Ken Miles, and a 2005 Porsche Carrera GT (of which only 644 were available in America) will cross the block.

Other highlights of this year’s lot include supercars and performance vehicles like an early-production 1989 Ferrari F40, a 2019 Lamborghini Aventador SVJ, a 1968 Baldwin-Motion Camaro, two 2018 Porsche 911 GT2 RS models, and the first production model of the 1955 Ford Thunderbird sold to the public.

Celebrity-owned vehicles up for auction include a 2001 Ferrari 550 Barchetta owned by musician Rod Stewart and actor Will Ferrell’s 23-window 1961 Volkswagen Microbus, which sports a turquoise and white paint job. There’s also a chance you could see the celebrities themselves at the event and not just their cars. A 1961 Volkswagen Microbus owned by actor Will Ferrell.
Barrett-Jackson

Will Celebrities Appear At This Year’s Auction?

Quite possibly. Although no celebrity appearances have been officially announced for this year’s Barrett-Jackson Scottsdale, famous names from Hollywood and the automotive world (including NASCAR star Jeff Gordon, former Valley resident David Spade, and actors Neal McDonough and Cuba Gooding Jr.) have been known to show up at the event to view, sell, or bid on vehicles. In other words, keep your eyes open since you never know who might be there.

What Else Can You Do at Barrett-Jackson Scottsdale?

Special experiences include Dodge and GR Supra thrill rides, which will offer the chance to hop in the passenger seat of souped-up hot rods being driven by professionals Or you can ride along in a RAM TRX 4-by-4 truck while it maneuvers through an off-road course filled with both bumps and jumps. Both will be offered daily from 9 a.m. to 5 p.m.

Starting on Wednesday, January 25, Barrett-Jackson Scottsdale attendees ages 8 and older can also go for “Hot Laps” in a new Chevrolet C8 Corvette or Ford Mustang GT around an on-site performance track. Rides will be available daily from 9 a.m. to 5 p.m. through Sunday, January 29.
Rather get behind the wheel yourself? The Volkswagen and Lucid driving experiences will operate from 9 a.m. to 5 p.m. daily, allowing you to take a 2023 ID.4 electric vehicle for a supervised spin around north Scottsdale.

Elsewhere, the Restoration Row operates daily from 9 a.m. to 5 p.m. and will be filled with vendors and companies offering advice, services, products, and equipment to help local motorheads rebuild their dream vehicles. Barrett-Jackson Scottsdale will also feature an enormous exhibitor marketplace with more than 200 vendors, various “automobilia” displays, and interactive exhibits offered daily.

QT Family Day on January 21 will also have unique activities like a Pinewood Derby from 8 a.m. to 3 p.m., the Barrett-Jackson Cup Parade from 3 to 5 p.m., and the “Gearing Towards the Future STEMFest” from 8 a.m. to 5 p.m.

When it comes to entertainment, Monster Energy BMX Shows will take place in the midway area from noon to 4 p.m. on Saturday, January 21, and from 10 a.m. to 2 p.m. on Sunday, January 22. Live music will also be offered almost every day of the event. Speaking of which ...
click to enlarge

Here’s a rundown of when and where local bands and musicians will perform at Barrett-Jackson Scottsdale this year.

Saturday, January 28: Georgia Chrome at Billy’s Tequila Music Stage, 11 a.m. to 1:30 p.m.; Cassie B Project at Billy’s Tequila Music Stage, 2 to 5 p.m.; Ryan Bexley at South Showcase Stage, 7:30 to 10 p.m.
KEEP PHOENIX NEW TIMES FREE... Since we started Phoenix New Times, it has been defined as the free, independent voice of Phoenix, and we'd like to keep it that way. With local media under siege, it's more important than ever for us to rally support behind funding our local journalism. You can help by participating in our "I Support" program, allowing us to keep offering readers access to our incisive coverage of local news, food and culture with no paywalls.
Make a one-time donation today for as little as $1.