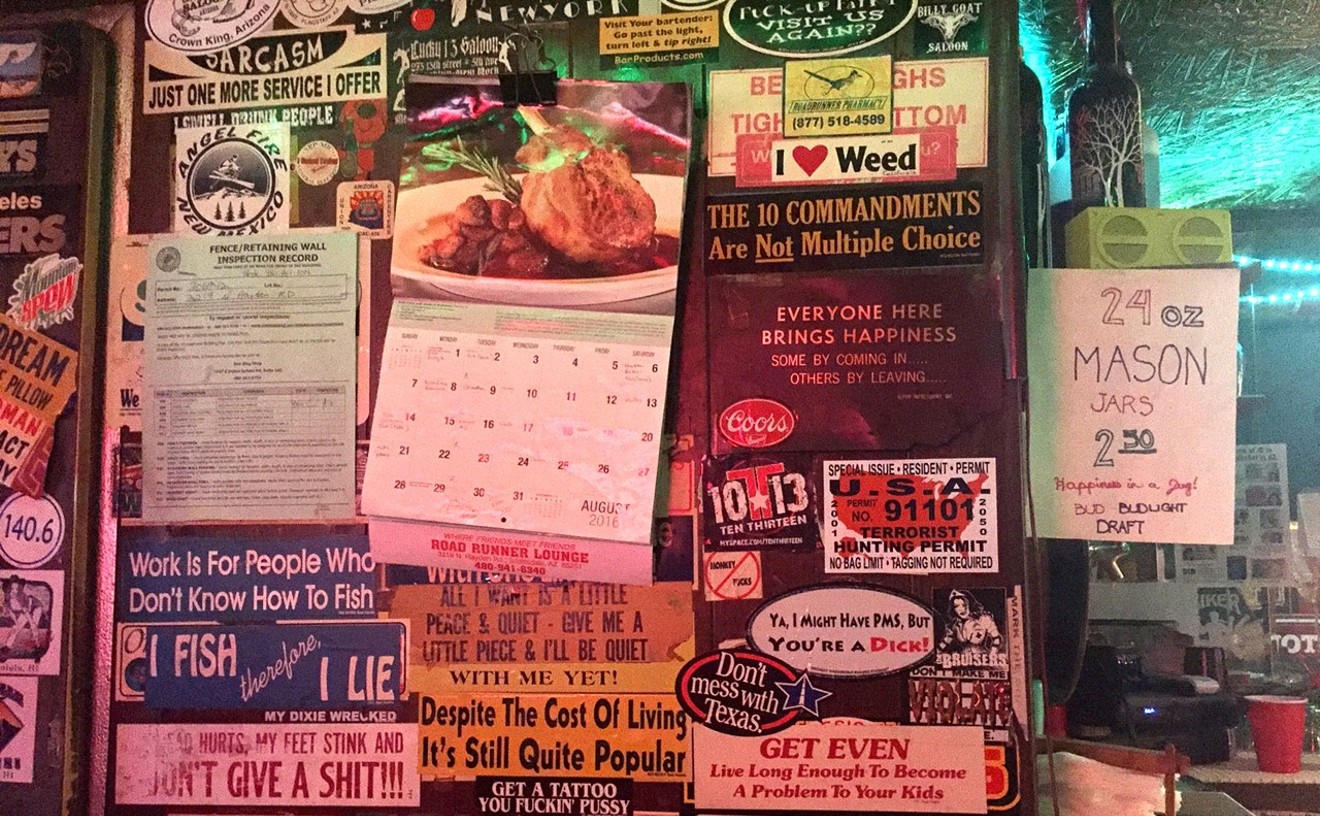 A humble confession: When we discovered this place, we rushed back to the office to see what we had written about it. Nothing in the archives. Well, friends, The Roadrunner Lounge shall not be ignored ever again, because it's soooo good. This rundown piece of you-know-what on Hayden Road north of Osborn Road is just steps away from Carlsbad Tavern, next to a curious Dutch-Chinese market, and across the street from a (for real) Starbucks. Things are definitely disconcerting from the outside — it seems as though the windowless joint is a mob front — but enter the decently lit spot in order to throw some darts, shoot billiards, and drink down a cheapo cocktail that's never shy on liquor. If enough word is to get out, the Roadrunner could very well be the next spot where south Scottsdale hipsters flock, though we prefer it to be our own greedy little secret. 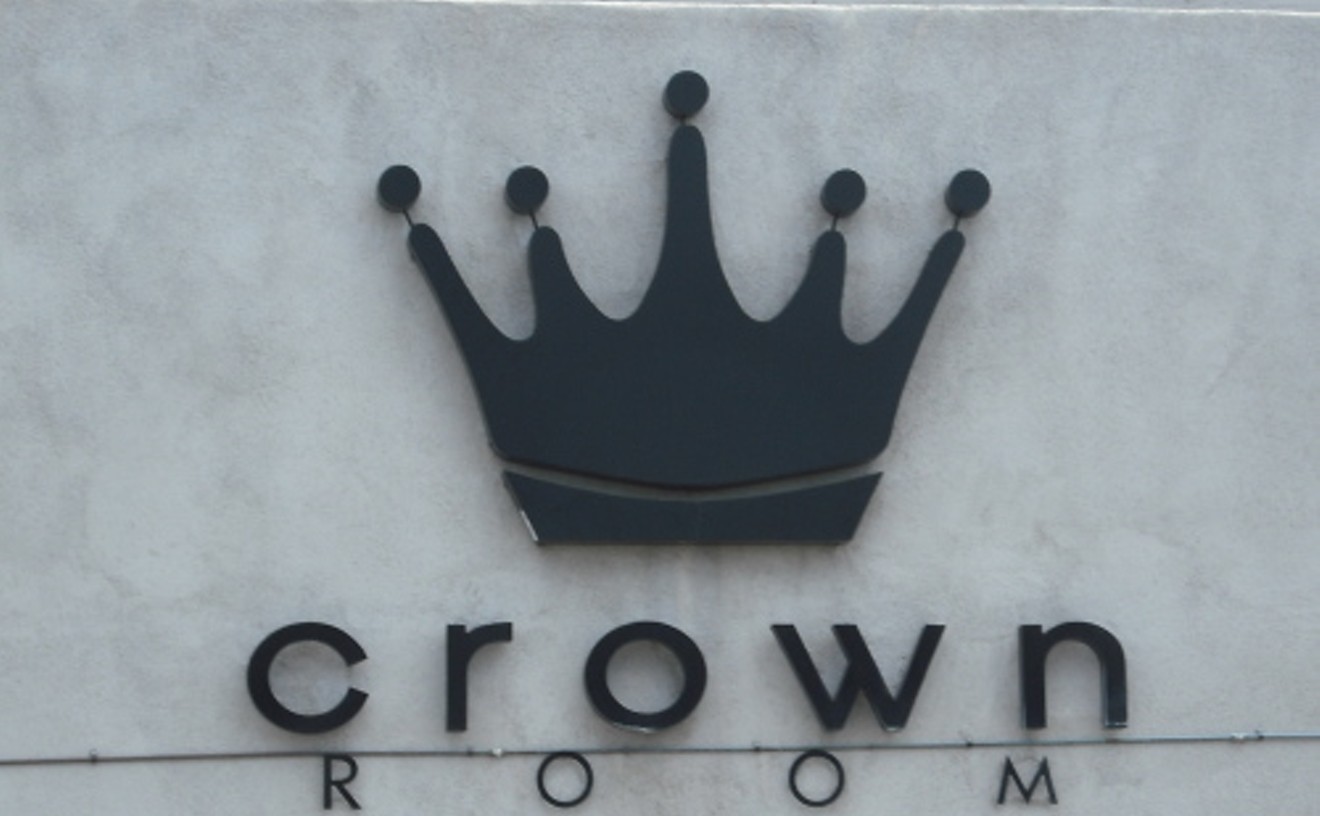 The name of the game here is chillaxing, which patrons seem to do in spades. Although this Scottsdale nightspot sits only a few blocks from the Scottsdale club hubbub of places like Axis/Radius and Pussycat Lounge, it feels like the usual crowd of d-bags and trouts is miles and miles away. The Crown Room is almost atypical of Old Town in that the staff and doorman don't seem to care whether you're not wearing Christian Audigier. They'll serve you just the same. There's a DJ, of course, but the mixes tend to be more downtempo. The drinks? Kinda pricey, but at least you don't have to fight your way through bodies stacked 10 deep around the bar to get them.

The Living Room at the W Scottsdale 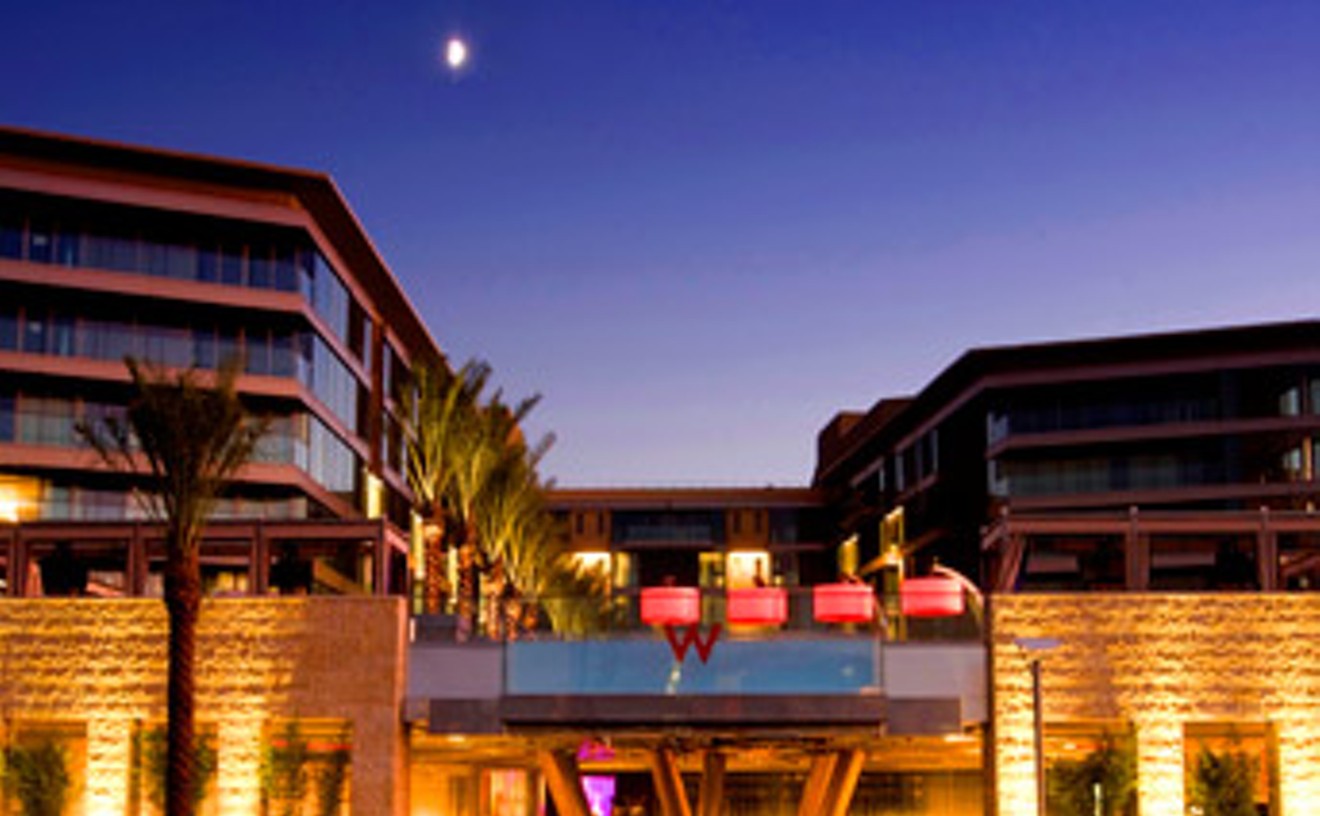 Of all its many amenities (30-foot-long martini bar, handcrafted artisan cocktails, posh Mid-Century Modern furnishings), the main benefit of spending an evening at this lobbyside salon at the W is the nonstop cast of characters who parade by you. There's the ditzy chickadee with the fake-bake tan who's had a little too much to drink and can't seem to navigate walking down the stairs from the second-floor pool area in stilettos. Following her is the herd of spiky-haired, collar-popping bro-zillas who are running game on every piece of trim in sight. And we swear we saw DJ Jazzy Jeff (of Fresh Prince fame) checking in. We kid you not. But if being a looky-loo loses its flavor, the den-like lounge is stocked with a library of art and travel books.

Lon's at the Hermosa 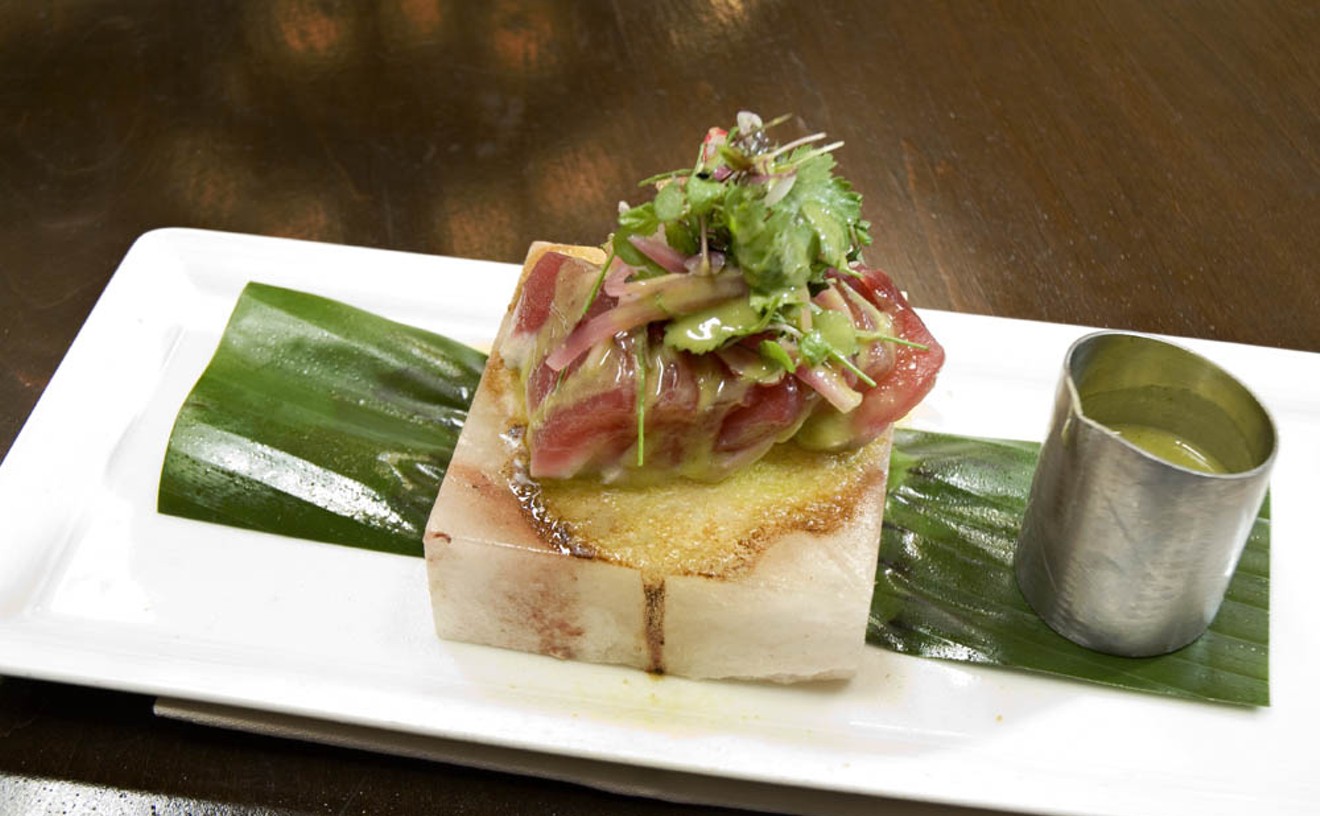 Don't make the mistake of hightailing it home after dinner at Lon's, a longtime favorite restaurant of ours. Instead, saunter onto one of the patios around the old joint and curl up (alone or with a loved one) on a comfortable chair or couch. Now, experience one of Arizona's warmest, coziest, and most romantic settings. Perhaps (on certain nights) a friendly, acoustic guitar-playing minstrel will serenade you. For sure, you'll soon be mesmerized by the smells of the desert, the crackling of dry mesquite in the fireplaces. We know we don't have to tell you not to forget a nice after-dinner drink. By the time you actually do step into your car, you may feel as if you've been on a mini-vacation — right here in town. Every night at Lon's is a special event.

This Main Street spot doesn't look like much from the outside, but there's a grip going on inside this laid-back, off-the-radar watering hole. There's live music basically all the time, an 11 a.m. to 6 p.m. happy hour every day of the week, and awesome video games like Big Buck Hunter. Then there's the bar's namesake, an indoor smoking patio that's accessible from the main room. It's well ventilated and there's plenty to gawk at, such as a vintage television tuned to infomercials and dudes/dudettes choking down cancer sticks on Bike Night (as in motorcycles; you'll see plenty of 'em on a Thursday). 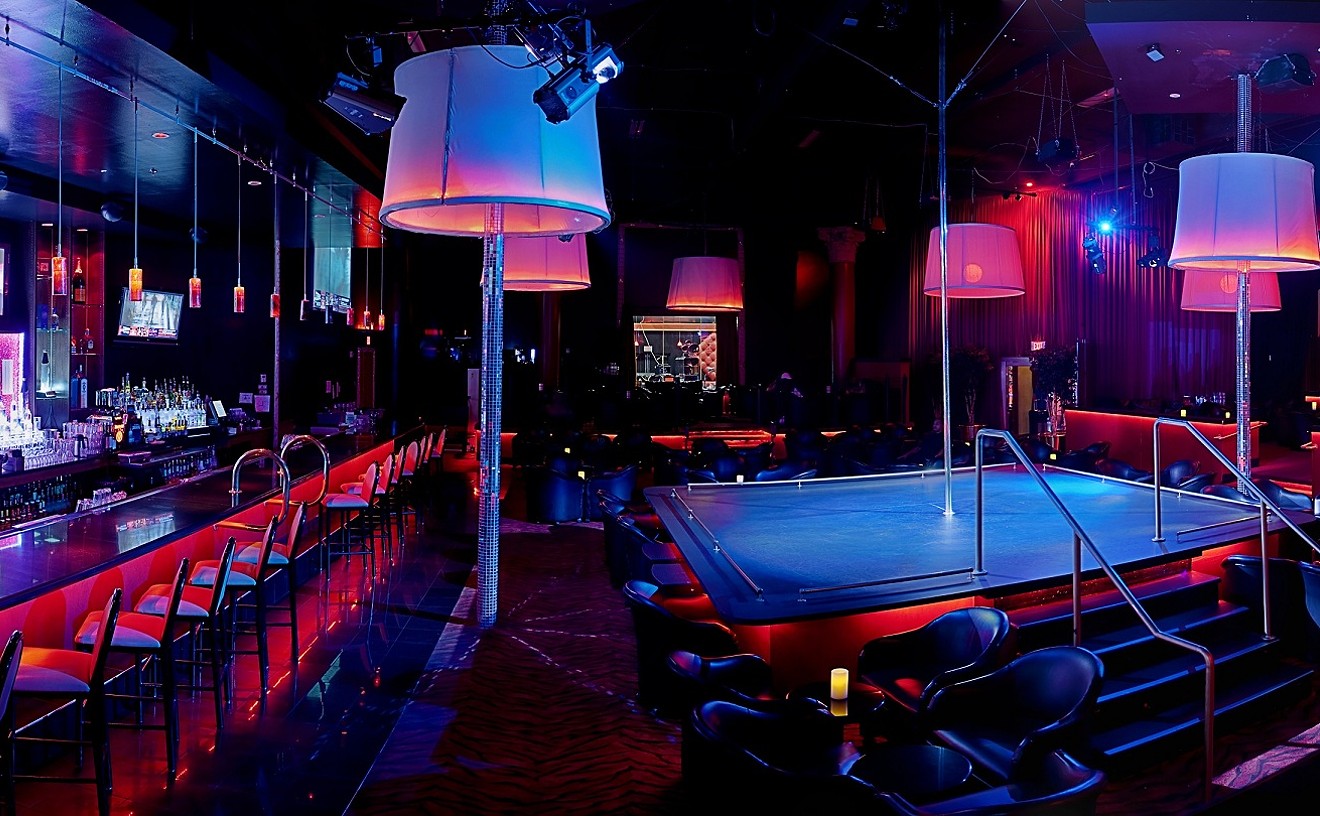 If I Dream of Jeannie's magically delicious heroine had a secret lair, it would be the Harem Lounge. Part coffee shop, part hookah lounge, this Moroccan-themed strip-mall jewel is bathed in sumptuous red light cast by stained-glass lanterns that twinkle in the sexy loft above the cave-like shop. Soothing, exotic beats blare in the background as customers mellow with water pipe in mouth. Homemade chai, coffee and Middle Eastern appetizers are all on the menu, but the main course is the shisha offered in more than two dozen flavors, including black licorice, cola, and double apple. Though the hookah prices are a bit steep, we think the ambiance and late night hours — until at least 1 a.m. daily — more than make up for it. Plus, there's a ton of cozy seating arrangements inside or outside on the huge outdoor patio, so you can always tap a couple of friends to rock this Casbah with you.

You saw your ex hanging out at downtown's Lost Leaf, but she didn't see you — under no circumstance do you want to cross paths with her — so you head over to the Bikini Lounge and run into the dude that's dating your ex. Ugh. You should just go home, but you're dolled up and rocking a sweet pair of drinking shoes. Where to? The answer is about three miles west of downtown on Grand Avenue at Renee's Grand Tavern. The spot looks a bit different from its previous incarnation — Renee's closed for six months so that new ownership could upgrade the outdoor fireplace and other cosmetics — but the place still rules. Plus, they're bringing it with some super-cool entertainment and club events six nights a week. You may not know anyone at this off-the-radar drinkery, but, hey, that's how you prefer it tonight. 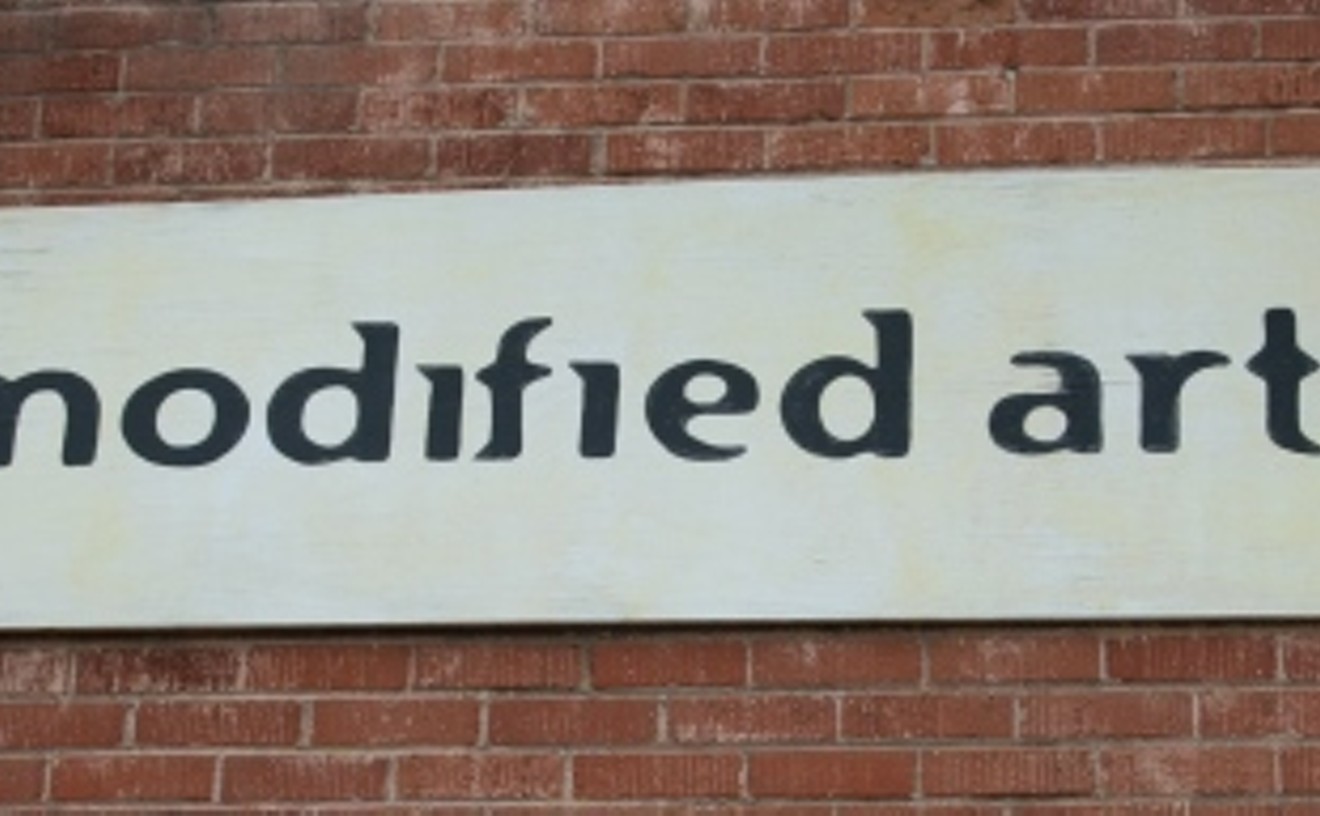 You wouldn't think an all-ages, alcohol-free music venue that doubles as an art gallery would need an aggressive bouncer, but Modified Arts' Ami Johnson has stories that suggest it does. Like the story about the time some guy pulled a knife on her for giving him a small bottle of water instead of a large. Or the story about the time two bums dented her car fighting outside, pummeling each other until she chased them off. Or the story about the time a guy stole the venue's hand stamp and tried to sell it back to her. Through it all, Johnson, who's also probably the smallest bouncer in town, maintains an admirably friendly but firm attitude that'd be a great lesson to other doormen in town, most of whom work in much nicer neighborhoods. In fact, we're pretty sure she ought to teach a certification course for local bouncers. 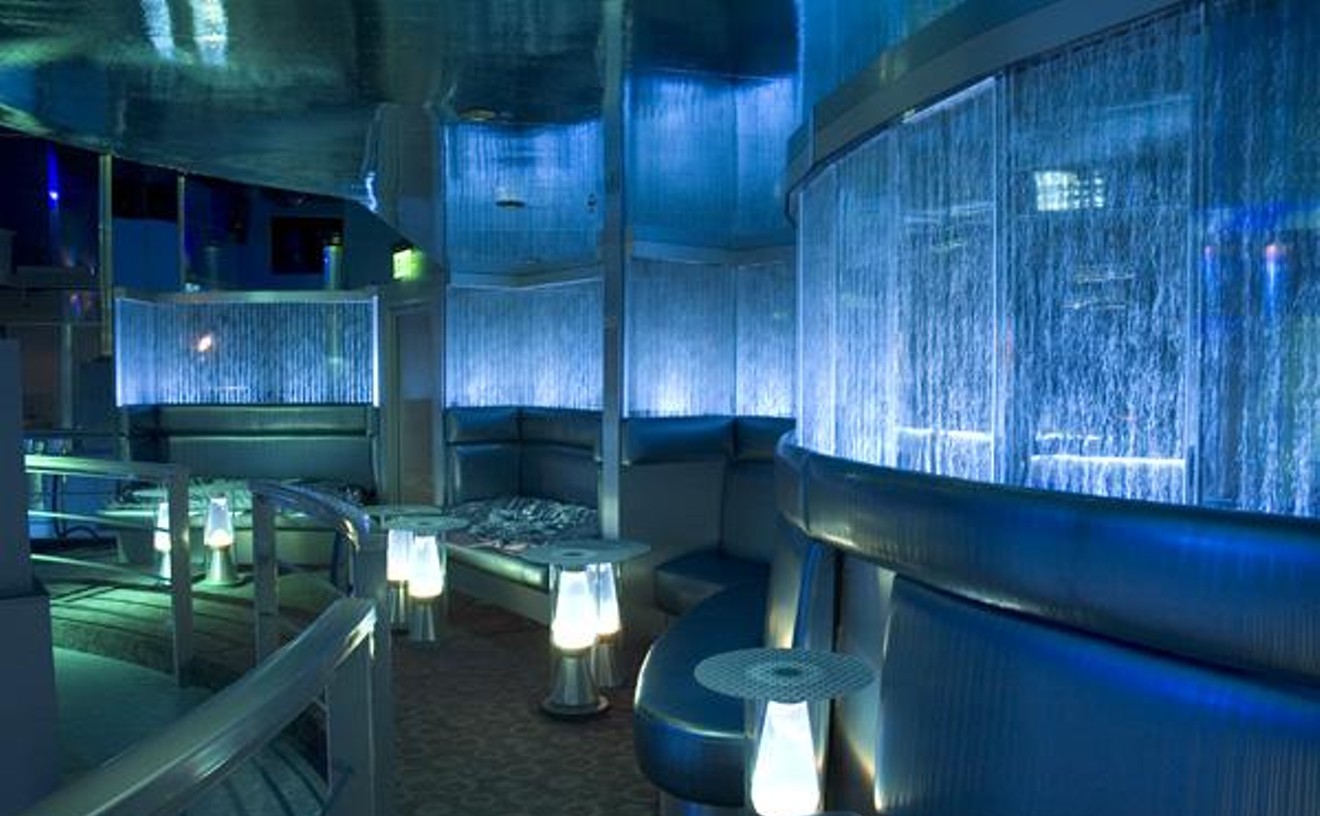 Just because those officious bastards at the Department of Liquor License say you gotta stop boozing by 2 a.m., that don't mean it's time to hit the sheets. (Who are they, your effin' mother?) The nightlife game's still afoot in Scottsdale long after last call, and we ain't referring to what's transpiring at that Denny's over near Osborn. Nightclub entrepreneur Aron Mezo turned the former e4 into a virtual after-hours Pleasure Island awaiting those insomniacs daring enough to keep strong 'til the break of dawn. Obviously, there's no alcohol around (which allows the 18-and-over types to get in), but you can suck down Red Bulls or other energy drinks for a boost while DJs like EPHX and Nando keep the dance floor going until 4 a.m. A nonstop buffet of gourmet pizzas is served on the open-air patio alongside blackjack tables and TVs showing Japanimation porn. (Yowza!) If watching schoolgirls and tentacled aliens, uh, interacting doesn't keep you awake, then it may be best to call it a night. 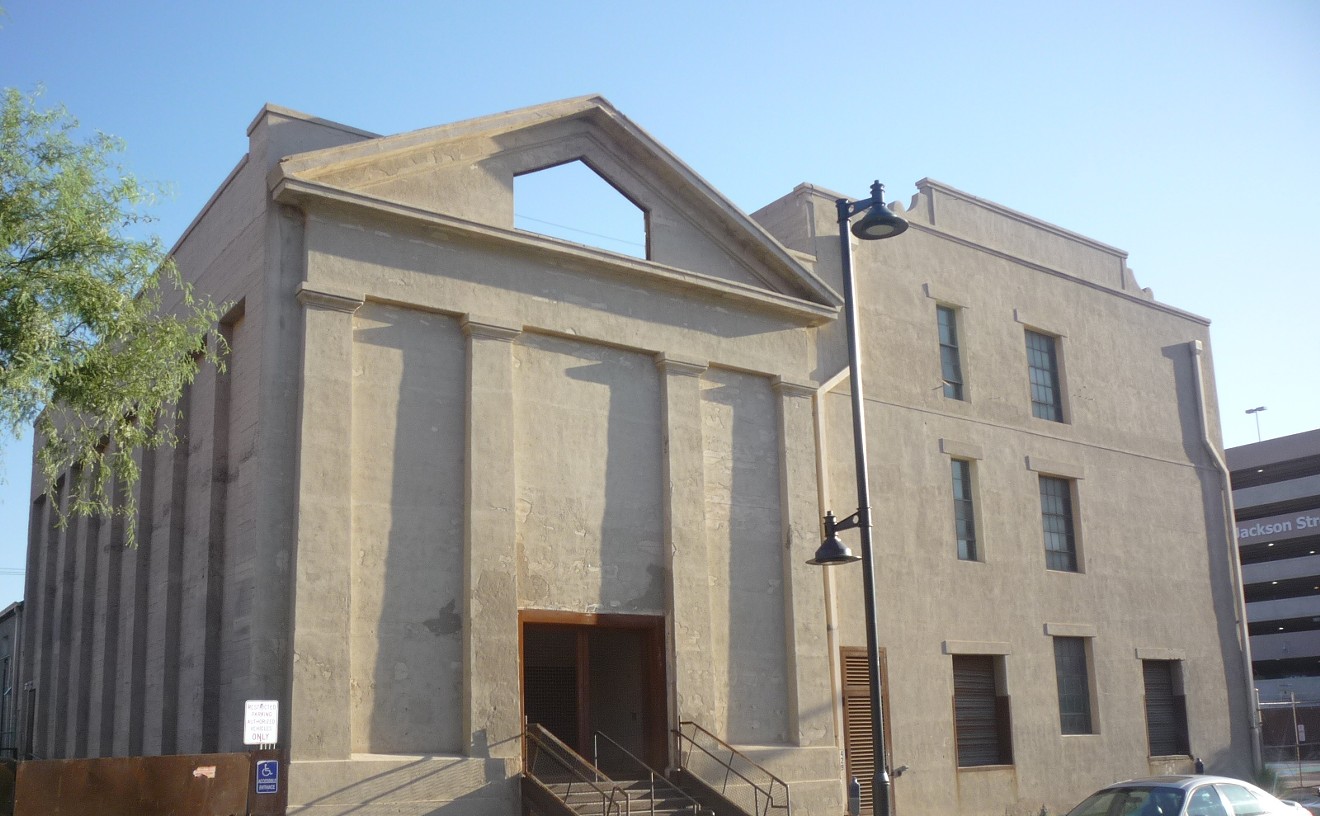 Helen Hestenes, performance artist and owner of the Icehouse, on Jackson Street in downtown Phoenix, has never given up on her dreams for the city — or her arts venue. When she purchased the neglected historic property with then-husband David Therrien in 1990, Hestenes imagined an avant-garde gallery and performance space with an edgy, urban heartbeat married to a solid foundation of history. The faux-column façade, large open rooms and church-like "Cathedral Room" seemed the perfect match to her vision. In no time, Hestenes was bringing in the kinds of acts the culture-deprived community was missing: a 12-hour performance piece by Live Art Platform, the LIFE (Liberty, Independence, and Freedom of Expression) Festival, the Invisible Woman breast cancer exhibit and an international art exchange program made possible by a Rockefeller Foundation grant.

But her dreams didn't end with the property lines. Hestenes hoped that other artists would follow suit and revitalize the surrounding buildings into gallery spaces, cozy cafes and entertainment palaces for underground art. Think an American version of Paris, minus the Eiffel Tower. The city of Phoenix had different ideas; namely, razing many of the nearby historic buildings to make way for parking garages, more jails, and a morgue — plans that never came to fruition.

Hestenes has always been outspoken about the need to preserve Phoenix's historic properties. After the Borden Dairy building was demolished, The Icehouse staged a mock funeral complete with tombstone and eulogy. Admittedly, it was a little quirky.

Nearly two decades later, the building stands as a testament to Hestenes' resolve. Despite numerous code violations, cease-and-desist orders, and demolition permits, the Icehouse hosts art shows, raves, and private parties. Recently, Hestenes offered a large-scale painting by the late Phoenix artist Rose Johnson during the summer's barter exhibit in return for a handicap-accessible ramp or repairs to the venue's elevator system.

It's proof that Hestenes still has plans for the Icehouse.