Rosie Torrez
We saw Katie McFadzen there once, staring into her latte. Another time, it was Rusty Ferracane, eyeing a tray of bagels. And then we spotted Sean P. Donnelly at the pastry case, and we knew: Urban Beans is the Phoenix equivalent of Sardi's, where actorly types quietly commingle and we, the lowly laypeople, are expected not to stare at them.Fortunately, there's plenty to distract us at this, one of our town's newer coffee houses. We love the Joyous Almond Smash, an iced coffee drink like no other, and the wheat-free snickerdoodles, which vie for our attention with the cranberry scones and the pretty palmiers. We keep hoping, if we go there often enough, we'll one day spy Jon Gentry eating a baklava. We can dream. 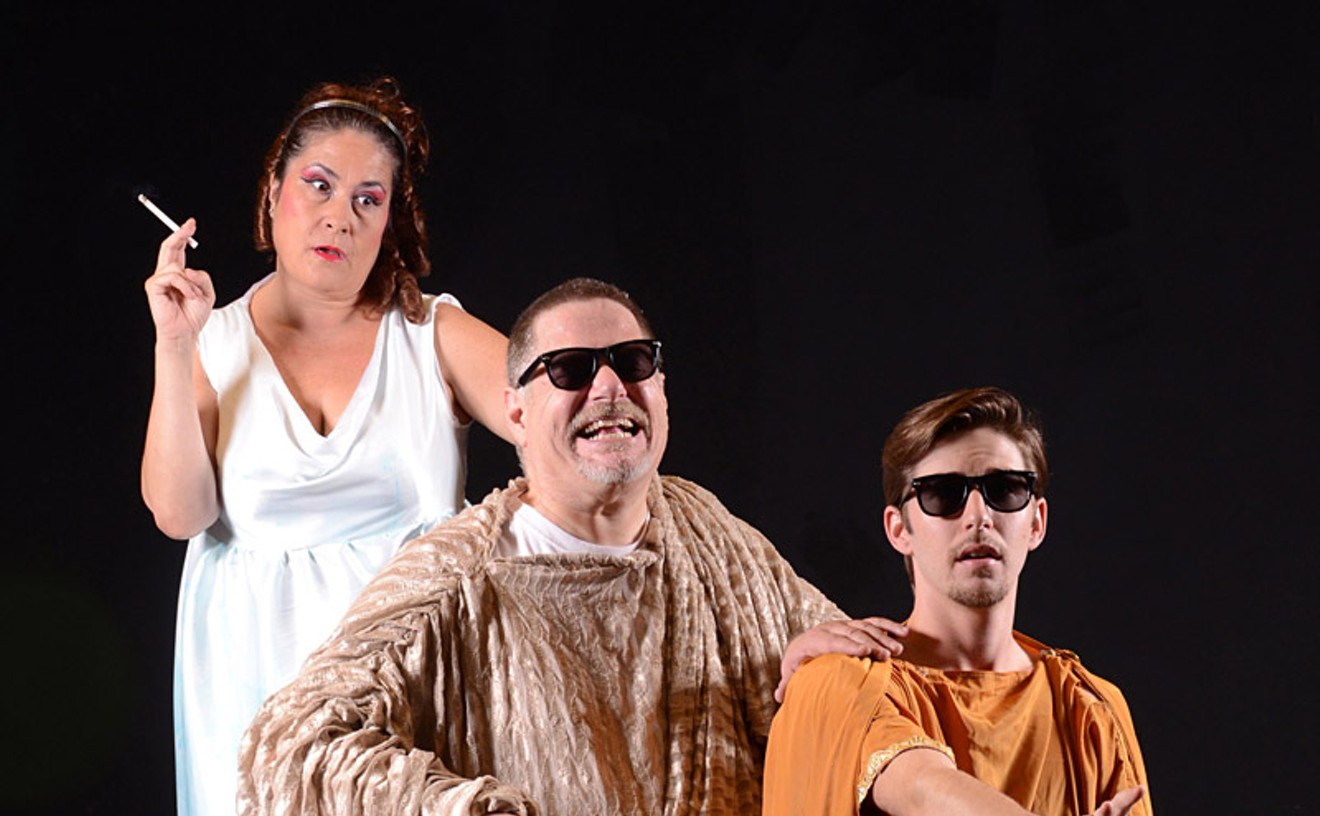 We love pretty much everything this super-hip playhouse presents, but our hands-down favorite bit belongs to Nearly Naked's artistic director, Damon Dering. La Dering's curtain speeches — especially those given on opening night — tend to go on, but we don't care, because he's so charming. We suspect that what makes these homey homilies so very enchanting is that Dering so obviously loves his theater company. Often he speaks of a play as "a show I've wanted to produce for decades," and always he compliments the cast and crew of the production we're about to see. Trust us — no one else in town is chatting up a show with the same gusto as this guy. Bravo!

Childsplay, at Tempe Center for the Arts

Is it possible that Childsplay has just completed its 32nd season? That (gasp!) Childsplay is practically middle-aged? It's true. Founded in 1977 by artistic director David Saar, the company started out playing to small groups at places like the Phoenix Zoo and rather quickly morphed into one of the best and best-known professional theater companies in the southwest. Creating plays and musicals for kids — sometimes new and original works, like Saar's much-lauded The Yellow Boat — Childsplay has delighted kids at its home space in Tempe and in touring productions that visit Valley schools year-round. Here's to 32 more years. 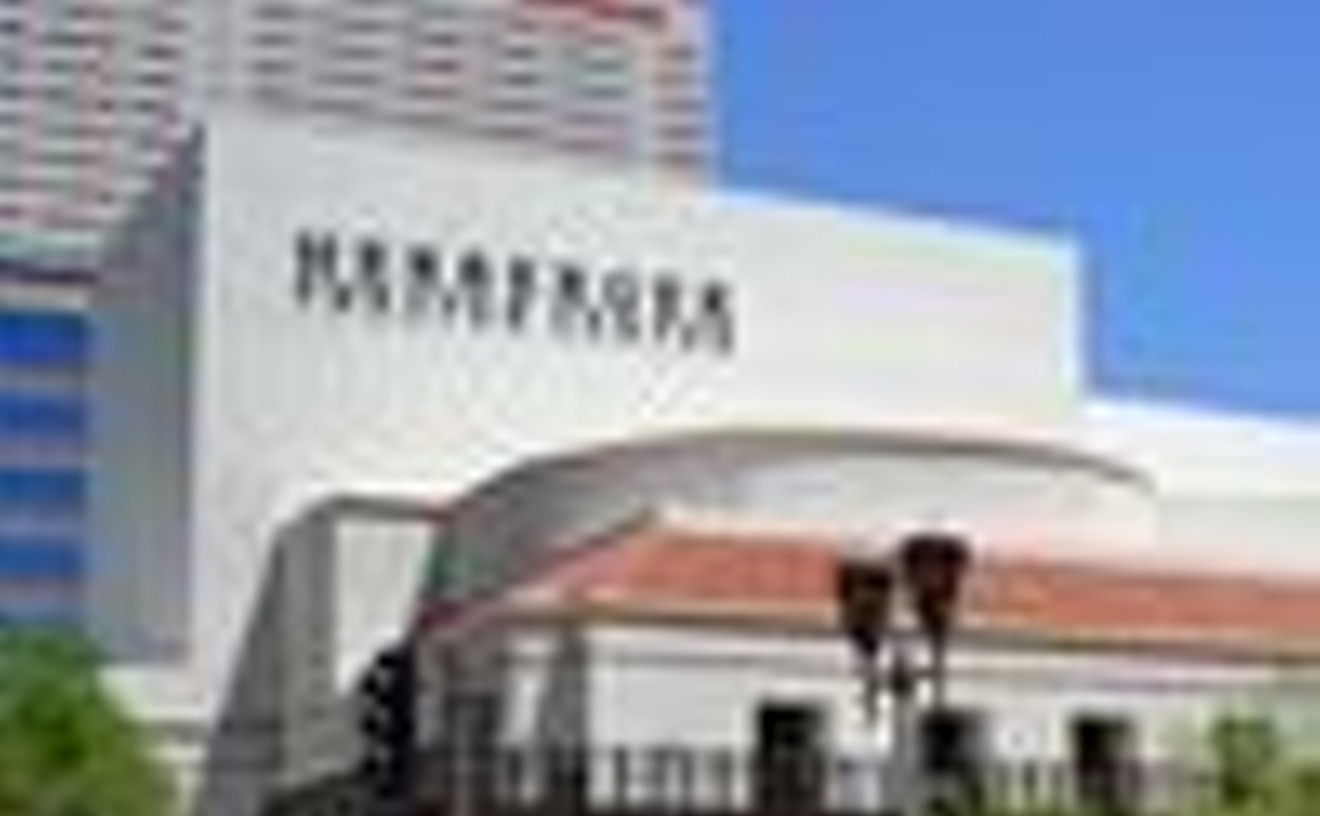 You walk through a concrete courtyard filled with beautiful sculptures of sprites and ballerinas, and on into a marble-and-glass lobby into which a gorgeous stone staircase spills. Welcome to the Herberger Theater Center, where resident troupes Arizona Theatre Company, Actors Theatre and Center Dance Ensemble make their artful homes. Before heading into one of the three theater spaces here, head upstairs to the wraparound art gallery, which features new and exciting work each and every month. Just for the heck of it, march up to the top balcony of Stage West (the smaller of the two main theaters in this gorgeous building, erected in 1989) and check out the sightlines from what in any other theater would be considered "nosebleed seats." Stop off at the Coffea Café in the lobby, or pop in during the week for one of the venue's ongoing Lunch Time Theater performances. Whatever you do at the Herberger, you'll enjoy it, and you'll want to go back.

Cineastes of the Valley owe a big debt of gratitude to movie house mogul Dan Harkins. Not just for the 15 local theaters he and his family have opened, but for one he closed: Centerpoint 11 in downtown Tempe.In 2008, Harkins shuttered the cinema and eventually sold it to the Downtown Tempe Community, a merchant-funded association. It was renovated, rechristened as Madcap (or Mill Avenue District Community Arts Project), and re-envisioned as a facility for live entertainment and music, as well as movies. Now all it needed was someone to help book some flicks.

Enter Andrea Beesley-Brown (a.k.a. the Midnite Movie Mamacita). The renowned film geek and organizer of repertory movie nights was hired to do just that when MadCap debuted in June 2009. Beesley-Brown began bringing in some real celluloid gems, including Enzo Castellari's 1978 The Inglorious Bastards on opening night. A wide variety of cult classics (UHF, Evil Dead II), indie flicks (Marvin's Room), foreign films (Marina of the Zabbaleen), and cinematic stinkers (Birdemic, The Room) has since screened for the delight of audiences. And to think it all happened because of Dan. Thanks, man.

Step away from the cineplex. Instead, give the eclectic offerings of local microcinema No Festival Required a try. NFR's programming focuses on feature-length documentaries and narratives, as well as experimental and subversive shorts from local, national, and international filmmakers and video artists. NFR's low-budget exhibitions and series help fill an independent-film void here in our city. Check NFR's blog for venues, which have included the Mesa Arts Center, Phoenix Art Museum, and Metro Arts Institute. Molly Smith
When it comes to enjoying an evening at the movies, it's tough to beat free. Luckily for futuristic film buffs, Sci-Fi Movie Night at The Paisley Violin offers flying saucers, planetary mayhem, and creatures hell-bent on revenge. It's every Tuesday at 7 p.m. and the admission price is zero earthly dollars. After ordering from a menu that features a tasty selection of food, wine, and beer, viewers can pull up a chair around the makeshift screen and order up a BLT Meltdown to accompany The Night the World Exploded or a Paisley Town Platter to share with friends during Zombies of the Stratosphere.

If you're tired of paying 10 bucks for a cinematic crapshoot, it's time to join Valley Movie Group, a meetup.com club for film lovers. Don't worry; this isn't the movie version of a book club. You won't be bored by subtitled foreign flicks about umbrellas or highbrow indie shit that makes sense to only three people on the planet. Organizer Jayson Hoffer has managed to attract more than 1,000 members to his group by focusing on blockbusters like When in Rome (for the chick-flick set) and The A-Team (for dudes). What you don't find out until you sign up is that Hoffer has discounted tickets for as little as $5 — and sometimes a few freebies — available on a first-come, first-served basis. Considering there's no cost to join the group, that's one smokin' deal. 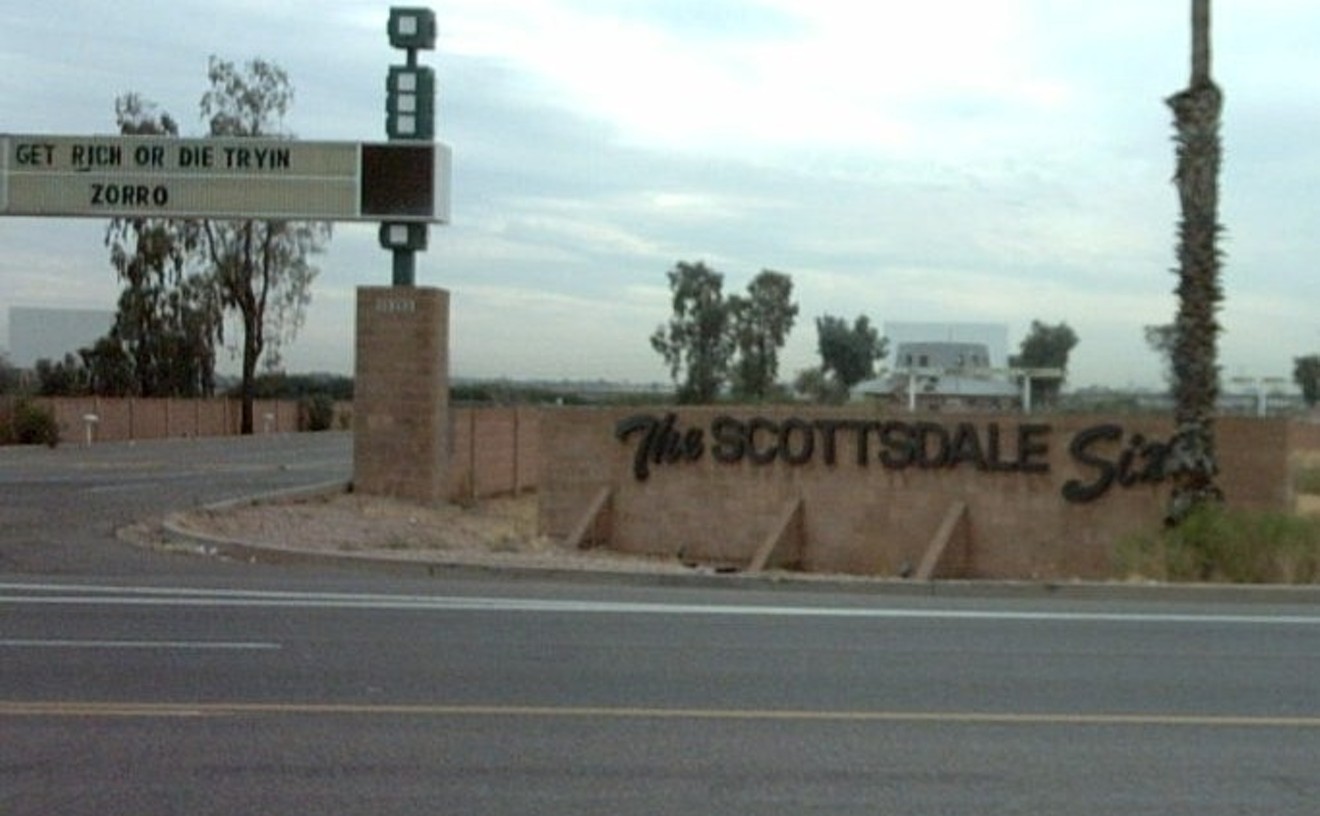 Established in 1977, the Scottsdale 6 Drive-In retains all the charm and romance of an old-school drive-in but has, thankfully, lost the bulky speaker boxes and replaced them with the drive-in's own FM radio frequency. The price of admission is cheap, too ($6.25 for adults — $4 on Tuesdays — and $1 for children ages 5 through 11), saving patrons big dollars compared to what's spent at a regular theater. The movies at Scottsdale 6 aren't your typical dollar movies that have been out for months, either — each night includes a double feature of new-release films.The real best-kept secret of the drive-in, though, is what it offers for families. We've seen folks pack up the kids and a picnic (you have to feed them at home anyway, right? Just pack it up and take it with you), a cooler full of kid and adult beverages, camp tables, even blow-up beds with kids in jammies in the truck bed. The kidlets can run around before and between flicks, and they won't bother anyone, while everyone sits out under the stars and experiences the grandiosity of that huge screen. Believe it or not, this location stays cool even in the summer heat at night.

This kind of thing could go either way: a couple of cinema nerds deciding to show artsy films in their Central Phoenix backyard with a screen and a projector. But this thing went the way of cool. Two guys named Krzysztof and John started this project humbly with a sheet tacked to the wall of a freestanding garage in the backyard of one of their humble homes, and now it's turned into a "waiting list only" monthly event. What looks like an ordinary, sparsely landscaped small backyard becomes a wonderland at night for these monthly double features. With three-tiered seating they built themselves, the large "side of a building"-size screen, and state-of-the-art projection equipment that rivals any movie theater's picture and sound system, the gentlemen share their love of art-house films with a growing list of fans. They snagged some chairs left over "from some municipal building." Overflow viewers can bring a chair or blanket, sit under the twinkle lights strung from trees, and watch curious and interesting films typically only found at festivals. All these fellas ask is a donation for their efforts and snacks/drinks to add to the shared concessions table. In the heat, they take a summer hiatus and transition to Madcap in Tempe, but in the fall they will be back up and rollin' the reels in the backyard again.