You can call David Quan the guy behind many of the large-scale murals on the sides of buildings along Grand Avenue — but he prefers to stick to the moniker Luster Kaboom. The local artist and comic started his Grand Ave. mural habit on The Trunk Space with the huge green face of a slobbering monster (sporting very sophisticated glasses). Since then, he's painted the insides of the avenue's galleries and on the front of Citywide studios. Our favorite so far (along with the one he painted on our own building, in honor of Best of Phoenix) is his blue "goo-scape" on the side of the Chocolate Factory. Quan jokes that the bright aquamarine was the cheapest color for his airbrush machine. If that's true, thank the hardware store, because the dripping, oozing, mural that wraps around the building just gave us yet another reason to park the car along the avenue for a closer look.

Ike doesn't consider himself a street artist like Banksy of Exit Through the Gift Shop fame. That film presents street artists as talented, cerebral, invested, politically clever, sometimes disturbed guerillas, and it's brought street art into the public consciousness. Some might argue that these artists do us all a public service. They make us laugh and think. Others, and the law, label them criminals, which is why they fiercely protect their identities and practice their art under cover of night.

Ike — a college student who studies art and marketing — is part of a local graffiti crew that actually accepts commissions and participates in competitions, which means he lives with one foot above ground and the other deep underground.

Ike's been busted. The first time, he was 13. He tagged a bathroom and the school pressed charges. Then, when he was 16, he was arrested for painting downtown — a felony carrying serious consequences that bleed into his adult life. Ike is undeterred. "I'm gonna get my message out there whether you like it or not," he says, and describes some anti-SB 1070 writing a lot of crews have been putting out there. But there isn't a trace of aggression or threat in his voice.

In fact, Ike might be considered a pacifist. He says, "Trying to bang on each other through graffiti — that needs to stop." Along with competition among top crews, there are rules in this world. When one writer goes over someone else's graffiti, it can escalate to violence. "Some crews hook up with the gangs for protection," admits Ike, who's seen and been in the throes of serious violence, even gunplay. But, he's careful to emphasize, graffiti and gangs are not mutually exclusive.

There's legal painting — businesses like carwashes and pawnshops, skate parks, fundraisers — that brings graffiti into the mainstream, but not without a cost to the artist. "People call you a sell-out, bitch, pussy, artsy-fartsy when you try to go legit," he acknowledges.

Staying underground is harder work, more purposeful, and dangerous. "The craziest thing is painting the freeway signs," he says, then describes running across five lanes of traffic, shimmying up a sign pole, hanging over it and onto it for dear life while painting one-handed and upside down as traffic thunders by below. Painting train cars is safer footing but requires ninja-like skills in getting over fences and past security.

"We are like ninjas," says Ike. "We're really smart. That's how we gotta be."

As a kid, Ike got into graffiti through skateboarding and hip-hop. Now it's all about letters and depth. He likes text, and that affinity is literally expensive. He uses mostly spray paint, favoring Montana, a high-end German product designed by and for graffiti artists, and he budgeted about $1,500 last year for paint. A local hardware store cuts him a deal.

"Writers are doing graffiti for a reason. You have to have some emotional problems. Other people smoke pot or read the Bible. It's my way to stabilize myself," Ike says before pausing and becoming thoughtful for a minute. "Probably in an unstable way."To see more photos of Ike's graffiti, visit www.phoenixnewtimes.com/bestof2011.

Like any good (and smart) graffiti artist, KENO keeps a low profile — until he decides to put up a piece in one of his signature spots or a huge roller (i.e., a thick tag, literally done with a bucket of paint and standard paint roller). His work is recognizable by clean letters and wild styles, and it's traditional by graffiti standards: He sticks to writing his name and the name of his crew, BAMC, on walls, boxes, bridges, and trains throughout Phoenix. But unlike any of the dozens of other crew members or big names within the graffiti scene, KENO's developed a knack for documenting the work of others in addition to his own. He started KENO TV (KenoTV.net) a year ago and has since shot, edited, and published 14 short films that feature local graffiti and graffiti artists. Now that's style.

Best Place to Spot a Stencil

Sure, there are plenty of sidewalk spots and electrical boxes in Phoenix that are decorated by a few secretive street artists in town.

But when we want to see something fresh and impressive, we head to the northeast corner of Fourth and Garfield streets. Just behind reBAR, around the corner from the fading Soldierleisure mural, theres an abandoned, red-brick building whose boarded-up windows serve as frames for some of our favorite stencils. Artists Nomas and SIKE have been here HMPH and CITIZEN, too.

Theyve sprayed Madonnas, monikers, gorillas, and political messages onto the buildings plywood and paper-pasted front door, and theyve given us a sure-fire spot to catch some seriously cool artwork.

Best Bicycle in a Tree

By day, you'd hardly know it was there. Take a stroll down Farmer Avenue in Tempe after dark, though, and you'll undoubtedly come across a glowing purple bicycle permanently fixed atop a tree. The bicycle, the tree, and the purple string of lights all belong to local Tempe artist Eric Iwersen.

Why stick a bike in a tree? Why wrap it in purple lights? We're not certain. The answers lie with Iwersen. We are grateful, however, for his eccentricities, as the purple beacon has often pointed us in the right direction — toward home — after a drunken night at Taste of Tops.

Even if you don't actually ride the city's light rail, we bet you've stopped to admire the public art at light-rail stops from the comfort of your car. One of our favorites is visible not only from the road, but also from the ground and even the sky, as it sits above Tempe Town Lake — right below Sky Harbor Airport's flight path. Artist Buster Simpson's display of LED lights puts an ever-changing rainbow above the lake, reflecting colors in the water. Stop and stare at the bridge long enough, and we know it sounds corny, but you might just feel like that bridge is speaking to you. Try it.

Three years ago, Mark Dudlik wrote an open letter that pissed off the Phoenix design community — he wrote that the local design scene was dead. What the local designer meant was that support for local design wasn't strong enough, and if nothing was done, talented and creative people would inevitably skip town. The community reacted, and Dudlik was ready with a solution. This year marks the third Phoenix Design Week (October 1-18), which has grown from a few days of exhibitions and get-togethers to a three-week showcase with a national conference. The annual event gives designers from a variety of backgrounds (communication, graphic, industrial) and cities from around the country plenty of excuses to get out of their studios, talk about culture and creativity, and work together on new design ideas for Phoenix. 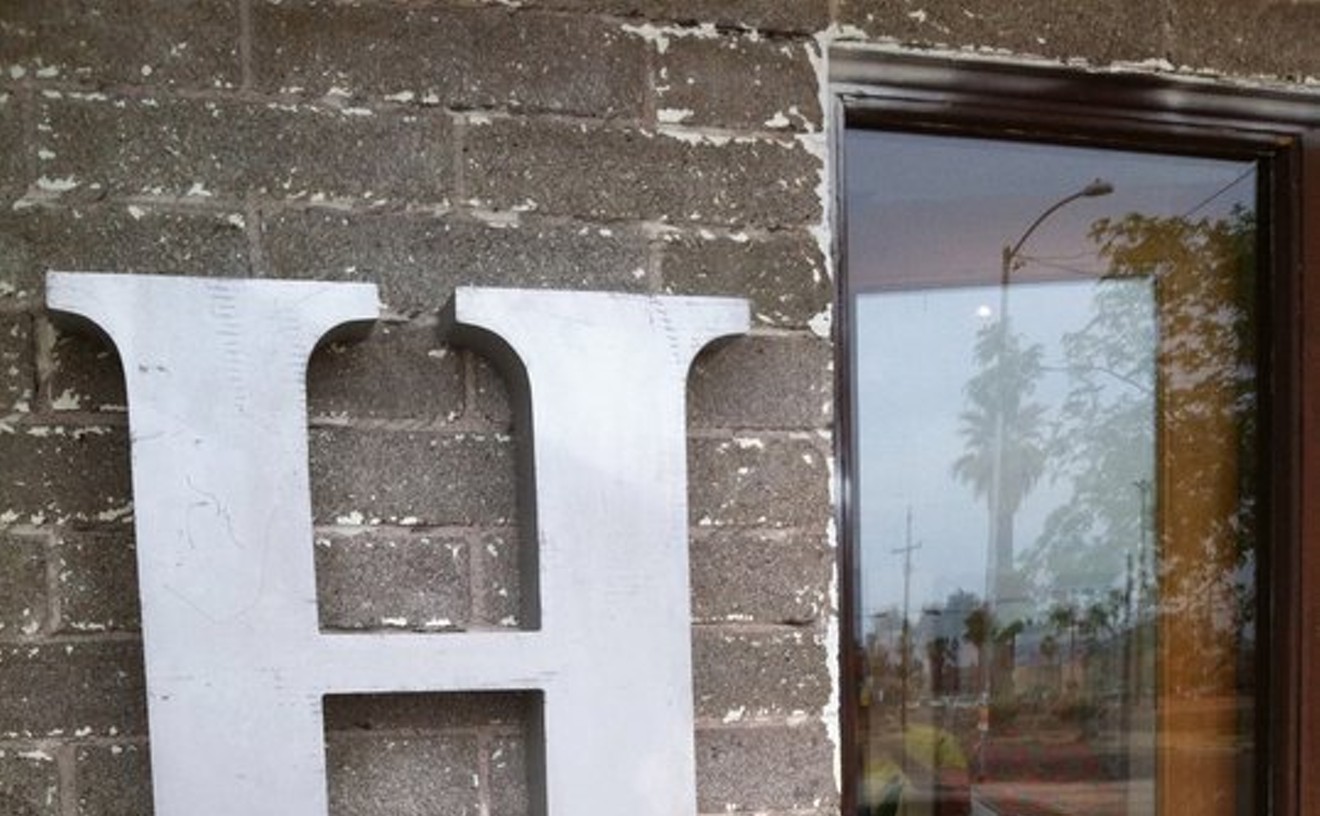 On our to-do list: Learn how to letterpress. Okay, so it's right below organize all the closets and master the KitchenAid — it's going to be a while. That's fine, because gallery HAZEL isn't offering letterpress workshops quite yet. Sign us up when they do! We love to visit this sweet little space on First Fridays so we can behold the glory of a fully functional vintage letterpress — and the super-cute stationery that's been made with it. We can't wait to soak our hands in ink . . .

In the weeks leading up to Best of Phoenix, our culture blog brought you 100 images of the city. One of our favorites comes from artist Melissa McGurgan, who created a series of letterpress prints in an homage to Phoenix. The prints feature common local descriptors, including Dry Heat, Snow Bird, and even Tent City, but our favorite part is the witty attention to detail — teeny-tiny handcuffs and tents for our sheriff's favorite spot, and a lovely roadrunner/snowflake combo for winter visitors. McGurgan manages to poke gentle fun and elevate this place to an artier level at the same time.

You won't find local artist Shelby Robertson's pimpest works on the shelves of your local comic book shop, though he's illustrated for the likes of Marvel, DC, and Verotik. A self-taught artist and founder of independent publishing house American Dischord, Robertson plays with the big boys of the comic industry but still takes hand-drawn pin-up commissions for around 50 bucks a pop. His rendering of heavily detailed and well-muscled figures has been compared to fantasy artist Frank Frazetta and late Witchblade co-creator Michael Turner, which means you'll get more than your money's worth if you throw down for a portrait. And like Frazetta and Turner, Robertson is fond of penning curvaceous vixens in barely-there clothing. Our favorite is Latex Alice, a sultry version of Lewis Carroll's heroine — she makes a Barbie doll seem normal and proportional.