The last few years have seen a crush of rock reunions, from stadium stars like Rage Against the Machine to indie darlings like Pavement. But none have meant more to Arizona than The Format announcing a series of shows for spring 2020. The Format were, for a specific generation of music fans around these parts, the first big local band that broke through to the national mainstream. Those fans are now in their mid-30s, many of them pining for the sweet serotonin of simpler times. The reunion of this pure indie-pop group — two friends, a shared love of music, and a lot of great songs — is the feel-good story of the year, maybe the decade. Those concert dates were eventually pushed back to July 2021, due to COVID. We'll wait. The Format's reunion is something worth living for.

It was quite a coup when the inaugural Sandbox Music Festival in Mesa booked Lil Nas X as a headliner just as his infectious single "Old Town Road" was making its historic journey to the top of the charts. But two days before the rapper was supposed to slide his Porsche into the parking lot of the Scarizona Scaregrounds, he announced on Twitter that he was taking some time off and would not be appearing. Festival organizers were surprised by the move, but they more than made up for the cancellation by refunding tickets and even making the event free to attend. Then, just as the organizers were mounting a triumphant return in 2020, the coronavirus pandemic ensured that no one would be playing at Sandbox this year, either.

When the pandemic forced live music venues to close their doors, it left their hard-working security guards, bartenders, and sound engineers without a steady source of income. Club owners set up several fundraisers aimed at providing a financial lifeline to their employees. Some offered donors incentives like ticket discounts to use when the clubs reopened. But with Arizona a hotbed for COVID-19, who knows when concert lovers will be able to use those? Stephen Chilton, the owner of The Rebel Lounge, figured that people might want some merch instead, so he teamed up with design studio Hamster Labs and T-shirt printer Acme Prints to create a one-of-a-kind shirt bound to turn heads. The black shirt has the venue's logo on the front and a cool Western design of a cowboy on a bucking bronco in the desert moonlight on the back. We wear ours when we want to broadcast our style and our support for local venues all at once.

It took a whopping seven years for Pearl Jam to come out with their latest album, Gigaton. And when we watched the music video for the band's single, "Dance of the Clairvoyants," we were delighted to see something familiar: dramatic storm footage by Phoenix photographer and weather chaser Mike Olbinski. Our gorgeous Arizona lightning was featured alongside other nature imagery like the Northern Lights, waves crashing, the Earth from space, and floating fire embers. While the track likely won't be played at any of the weddings Olbinski photographs when he isn't capturing lightning strikes, it's still something on his résumé he can brag about at the reception.

To promote his new album, Still on the Rise, rapper Futuristic looked to music's past for a marketing idea: the album preorder. The thought of purchasing an album before its release date seems weird in the age of streaming, but artists don't make much money when you listen to their music on Spotify or Apple Music. With no live shows on the horizon, album sales are more important than ever. Back in April, the Tempe rapper offered fans who posted a screenshot of their preorder receipt on Instagram and tagged him and his label in the pic the chance to win $100. The promotion lasted for five days, and the catch was only one fan a day could win. No word if the idea helped boost his numbers, but it only cost him $500 to try.

Rage Against the Machine Ticket Drama

It was one of the most anticipated tours of 2020, and rumor had it that tickets for the Rage Against the Machine reunion show at Gila River Arena in Glendale — originally scheduled to take place in late March before their Coachella dates — had sold out in less than an hour. It was the band's first round of concerts since 2011, and those who didn't snag a $125 seat made their, well, rage against the band known on social media. Tom Morello took to Twitter to calm down angry fans, but that only made things worse, with those who didn't get a ticket telling the guitarist that it was his fault they wouldn't be going because the quartet was "too popular." The band magnanimously added a second show, but it didn't matter in the end. The pandemic canceled music events throughout the country, including the Rage shows. The rage against Rage was, ultimately, for naught.

The pickings in this category were slim, thanks to a pandemic that forced the cancellation of all local music festivals after mid-March. But even if that hadn't happened, M3F (also known as the McDowell Mountain Music Festival), which took place days before the concert industry shut down, would likely still get the nod. As with its previous editions, the three-day, three-stage affair at Margaret T. Hance Park dazzled. The lineup was diverse (indie, Americana, hip-hop, electronica, and soul acts were represented) and the performances were fantastic (particularly sets by Bon Iver, Sofi Tukker, and RÜFÜS DU SOL). There were also entertaining amenities like funky art cars from Walter Productions, live art displays, and a silent disco. Whether or not there's an M3F in 2021 is still very much up in the air at this point. If not, we'll have plenty of memories from this year to tide us over.

Rips Bar in the Coronado District opens at 6 a.m., which tells you something about what kind of place it is. If you indeed enter this bar during daylight hours, you'll have to give your eyes a minute to adjust to the dimness inside. Then you'll want to order a massive bloody mary — a signature at Rips — from the bartender. The midcentury building that houses the bar was constructed in 1959, and the front room is said to be designed by a Native American architect and student of Frank Lloyd Wright. Before it became Rips in 2009, this place was known as the Pick Lick House, Dodge City Saloon, and Dutch Inn (just to name a few), and Waylon Jennings and Charlie Pride are among the legions who've bellied up inside over the years. These days, Rips is a destination for pool, arcade games, dance nights, karaoke sessions, and live punk, ska, and rockabilly bands — the basics of love, as ol' Waylon might say.

Late last year, across the parking lot from their clandestine underground tiki lair UnderTow, Jason Asher and Rich Furnari opened Century Grand. This is certainly the Barter & Shake duo's most ambitious concept yet. The level of experimentation driving cocktails at Century Grand is astounding. You see kefir and lacto-fermented blueberries and smoked tea, a slew of ingredients that tell the drinker, from the first menu glimpse, that the old fashioneds and daiquiris of yesteryear are ancient history. National experts agree, as Century Grand was recently named a finalist for Best New Bar by Tales of the Cocktail. Amazingly, even the most Seussian ingredient combinations work at Century Grand. Imbibing the potions of Asher and Furnari is drinking in a brave new world of cocktails. 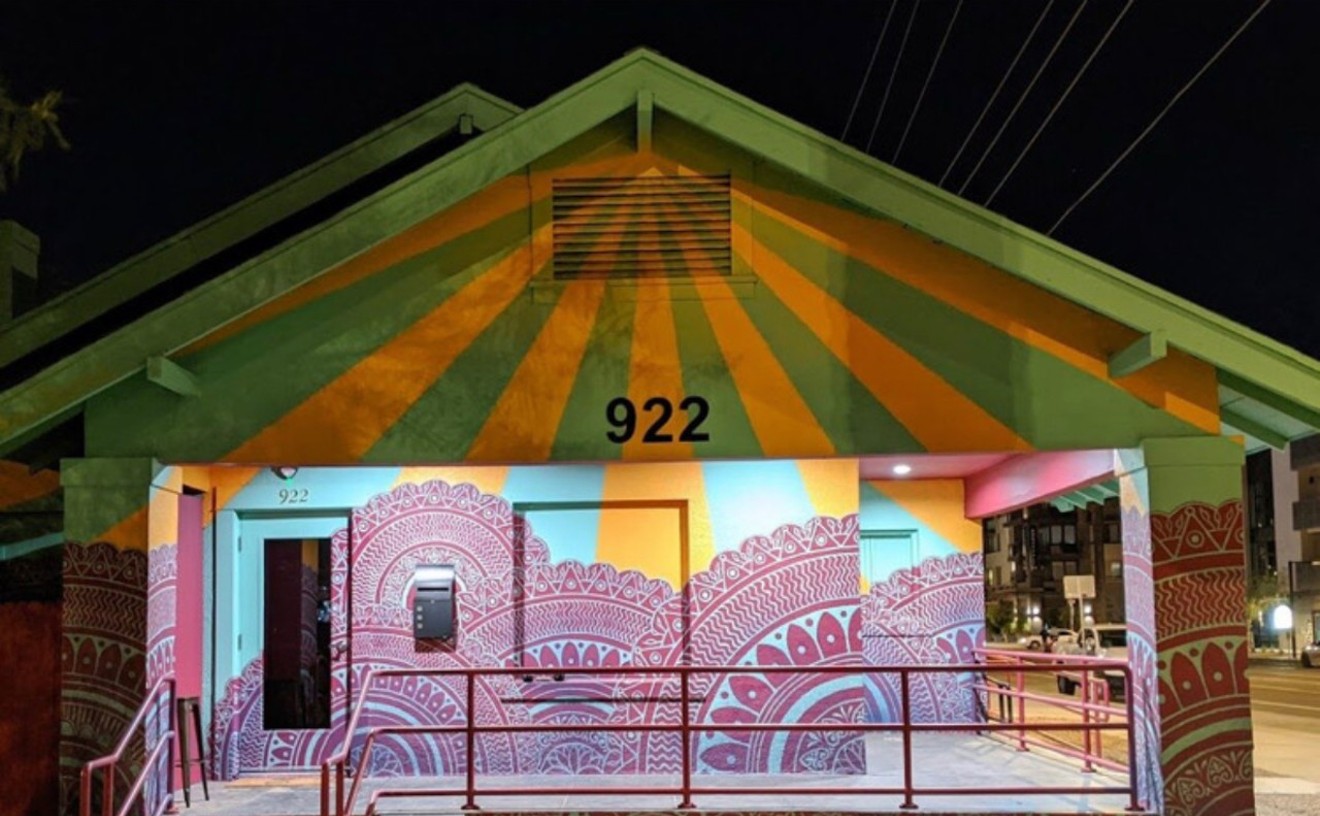 When a bar has the name Killer Whale Sex Club, you'd expect it to be memorable — and maybe a little prurient. This Roosevelt Row drinkery, which cocktail industry pros Sam Olguin and Brenon Stuart opened in early March, delivers on both counts. Outside, the bungalow-style building is adorned with a glorious mural of a rearing Pegasus rendered in orange, purple, and turquoise. Its speakeasy-like interior has lowbrow touches mixed with high-style drinks. Gold-painted fixtures are everywhere. A collage of cutouts from nudie magazines covers one wall. The Japanese shunga print The Dream of the Fisherman's Wife hangs over the bar, where the staff serves cocktails like The Hot Seat, a hibiscus-infused take on the bourbon cherry sour. There's even merch available, including hats and shirts with the phrase "Big Daiq Energy" — just in case KWSC wasn't unforgettable enough.