Two new amendments to a strike-everything bill moving through the Arizona Legislature could tighten marijuana testing standards and ease access to medical marijuana licenses across the state.


Though proponents see the legislative shift as steps in the right direction, especially in light of reports of contaminated cannabis and lags in medical license allocations, those against the bill take issue with the last-ditch efforts to pass laws majorly impacting the industry.


A strike-everything amendment passed in late March to House Bill 2050, sponsored by Phoenix Republican Representative Justin Wilmeth. The bill would require the Arizona Department of Health Services to allocate nonprofit medical dispensary licenses in counties in which medical dispensaries are more than 25 miles apart. 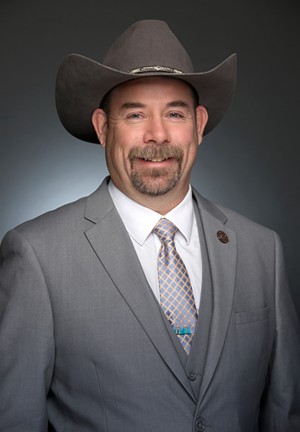 Arizona State Senator David Gowan
Arizona Senate
The amendment would require DHS to accept new medical marijuana dispensary applications for anyone who sought one since 2017. The shift would essentially give license holders the opportunity to secure permits for both medical and recreational sale.

Arizona NORML was previously neutral on the bill, but has since changed stances with the new amendments.

In February, Phoenix New Times reported that state inspectors found myriad problems with the production and distribution of cannabis goods, including the presence of salmonella in some products.


In April, the Arizona Republic reported medical cannabis from Grow Sciences, a Phoenix cannabis cultivator, to be contaminated with high levels of pesticides.


Rios said the article was a catalyst for herself and other legislators to take up marijuana testing legislation, citing public health concern for both recreational customers and medical patients.


“If we're saying this is a licensed facility, go ahead and purchase and you'll be fine, well, then we better make sure that we are ensuring that the product that people are buying is safe, and certainly doesn't contribute to more health problems,” Rios said in an interview.


Rios’ amendment would require medical marijuana dispensaries to separate, label, and test marijuana products in single strain batches. Once tested by a third-party laboratory, the laboratories would have to upload an approval certificate to the DHS online portal within five days, which then would be kept for at least two years.


The proposed legislation would order third-party labs to pass marijuana proficiency testing and the certificate to be available through a QR code printed on all marijuana product packaging.

The amendment also would waive the medical marijuana fee for veterans.


Gowan’s amendment would require DHS to contract secret shopper programs to collect and test random samples of marijuana products for sale at both recreational and medical dispensaries.


It also would make complaints against any testing lab or dispensary public and would provide protections to whistleblowers reporting misconduct from within the industry.


Gowan also proposed the Arizona Biomedical Research Centre within DHS to provide $5 million grants annually for five years for marijuana clinical trials, pulling money from the Smart and Safe Arizona Fund, which is supported by taxes on medical and recreational cannabis products.

Image by Michal Jarmoluk from Pixabay

Rios predicts legislative action around marijuana testing and the industry to continue well into the future.


“I see this bill as simply laying the foundation for continued discussions at the legislature to ensure medical marijuana safety,” Rios said. “I don't believe this will be the end all be all.”


The Arizona Dispensaries Association has opposed the legislation since the strike-everything amendment was first introduced in late March.

“The one thing that we don't love in legislation is when people try to push things through at the very end where we don't have time to have thoughtful stakeholder discussions,” Lauren Niehaus, board member at the ADA and director of government relations at Trulieve, said in an interview.


She said the ADA believes rule-making on testing and licensing is better left with DHS as it enables input from all sides of the industry.


“Discussions with all parties of the cannabis ecosystem are really critical to making meaningful change,” Niehaus said. “So that everybody's on the same page, so that we don't see anything in the marketplace that would stifle patient or consumer access.”


Copperstate Farms was previously against the amendment as well, but has since changed to neutral.


The amended bill passed the Senate 25-2 and now heads back to the House for a vote.