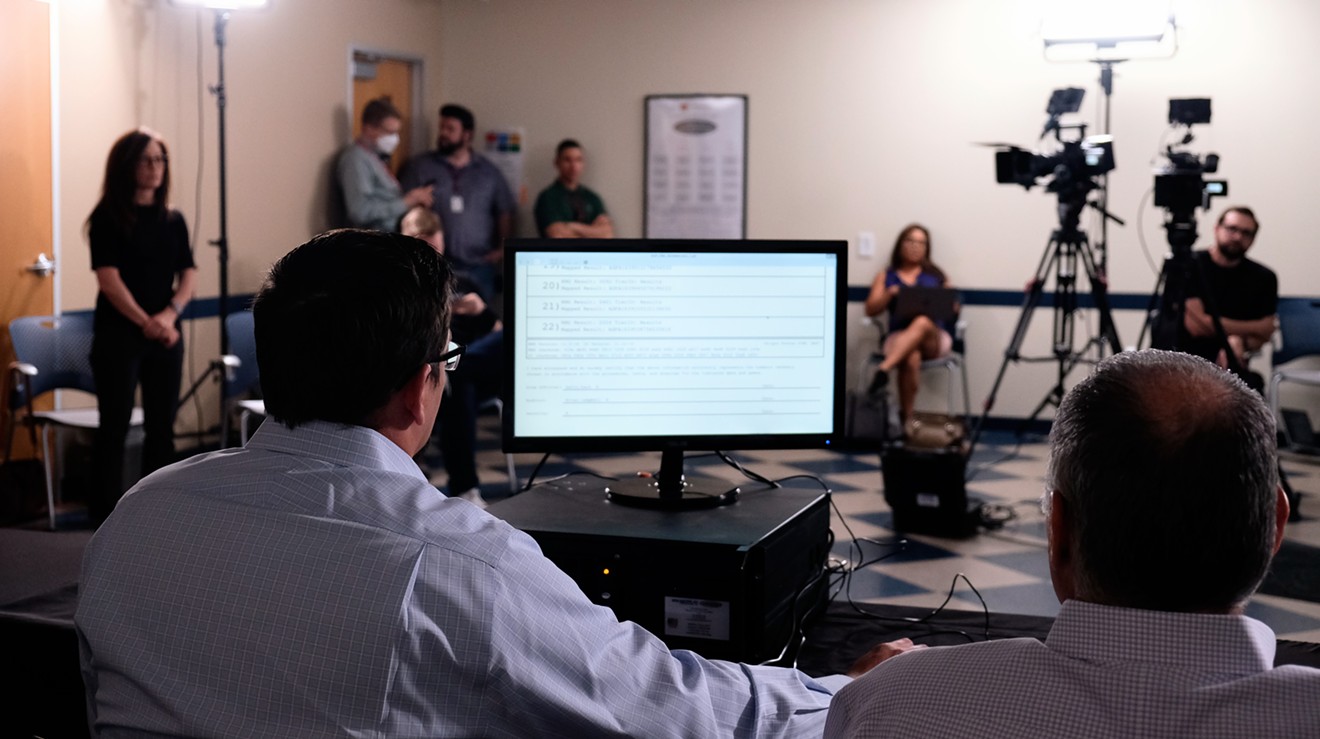 Twenty-six applicants hit the jackpot. The value of a license, the last of 169 that the state will award, is in the millions. And odds of winning were slim: Any given applicant could submit just two tickets into a lottery pool of 1,301.

Many of these applicants worked with big-time cannabis companies and investors to go through the complicated, expensive application process to enter the drawing. And an initial survey of the results shows that these companies won big: The majority of winners, according to Phoenix New Times' initial review, are applications backed by major cannabis companies or investors.

Still, each company or entity that applied had to be 51 percent owned by an individual who met the state’s social equity requirements. The program, which is meant to give back to communities harmed by the drug war, was open to people who fit a series of requirements, including income level, past pot charges, and ZIP code.

Despite weeks of anticipation, the scene of the drawing Friday felt oddly undramatic.

The drawing took place in a plain conference room at the Arizona Department of Health Services building in downtown Phoenix. A dozen or so reporters and videographers milled about, alongside ADHS staff and at least one social equity applicant who had asked to watch in person. On a table at the back of the room was a monitor.
click to enlarge

Independent auditors ready the lottery system at the headquarters of the Arizona Department of Health Services.
Katya Schwenk

Two partners of the accounting firm Henry+Horne were tasked with managing the drawing. At 1 p.m., after a brief introduction, one of the men hit a button on the computer screen, and the 26 winners were tabulated. There was little fanfare aside from cautious applause from the audience.

Now, all eyes will be on the winners.

At this point, we know that most of the winning applications — more than two-thirds, by New Times’ count — were backed by cannabis companies that already have dispensary licenses or other investors. This is hardly a surprise, given that such investors backed the majority of applicants in the pool.

In February, a New Times analysis found that almost 60 percent of the 1,500 or so applications had ties to corporate sponsors. That percentage may have changed slightly during the department’s review of the applications, during which about 200 applications were eliminated. In the end, 1,301 applications made it into the drawing.

Here’s our breakdown of the 26 winners:

Five applications tied to two shell companies based in Wyoming — whose ownership is still unknown — were selected in the drawing.

Those two shell companies, Helping Handz, LLC and Investing In the Future, LLC, both registered in Cheyenne, Wyoming, backed 204 applications in the lottery. Their precise relationship with these applicants is unknown.

Some of Arizona’s biggest cannabis companies — all of whom aggressively canvassed to partner with and sponsor social equity applicants — scored big on Friday, too.

One license went to an applicant who partnered with Social Partners, LLC — the company at the center of New Times’ investigation into social equity licenses.

One contract that Social Partners, LLC, offered an applicant was described as “deeply predatory” by experts. It created a third-party management company to siphon out the profits generated by the dispensary, leaving the social equity applicant with nothing unless they sold their shares. It’s not clear whether all applicants that worked with Social Partners, LLC, signed such an agreement.

Finally, one application — Arizona Tree Equity 2, LLC — is linked to Giving Tree Dispensary, a cannabis company based in Phoenix.

By our count, that’s 18 applications tied to investors — leaving eight that are independent, at least based on what can be gleaned from public records.

Spectators watch as the winners of the licenses are displayed.
Katya Schwenk
It’s clear that Friday meant a major win for some of Arizona’s biggest cannabis companies, some of which already have control of multiple dispensary licenses. What it will mean for the applicants that partnered with them is more of an unknown.

“We are very excited for our new partners to get started in the industry,” Curtis Devine, owner of Mohave Cannabis Co., wrote in an email to New Times after the drawing. “We’re having meetings over the weekend to get things moving in order to meet the state’s deadlines.”

Mohave has, in the past, declined to share details of its contracts with applicants, due to nondisclosure agreements. Devine has previously said that they are “in line” with the goals of the program.

Celeste Rodriguez, a longtime critic of the program and a partner of cannabis firm Acre 41, said she was “disappointed,” though hardly unsurprised, by the results of the drawing. For nearly a year, Rodriguez has been warning that the loose program rules would ensure that licenses quickly fell into the hands of major cannabis players.

“But this will not deter us from continuing our fight to make sure that those who truly deserve social equity and justice receive the relief they so desperately need,” she said, adding that she felt the state was not serving “the best interest of those adversely affected by marijuana laws.”

Now, though, the licenses are in the hands of these 26 applicants, who will be charged with building up a business. Many have predicted that the licenses will quickly change hands. Winners could also face zoning issues and all the bureaucratic challenges of getting a brick-and-mortar dispensary running within a regulated industry.

For the winners, at least, it's just the beginning.
KEEP PHOENIX NEW TIMES FREE... Since we started Phoenix New Times, it has been defined as the free, independent voice of Phoenix, and we'd like to keep it that way. With local media under siege, it's more important than ever for us to rally support behind funding our local journalism. You can help by participating in our "I Support" program, allowing us to keep offering readers access to our incisive coverage of local news, food and culture with no paywalls.
Make a one-time donation today for as little as $1.