New Mexico Is Giving Medical Pot Cards to Nonresidents — But Was It a Mistake? Duke Rodriguez, a Scottsdale resident and CEO of the cannabis company Ultra Health LLC, became the first Arizonan to get a New Mexico medical cannabis card on Friday after suing to enroll in the program alongside two Texan petitioners last month.

The three had demanded that New Mexico officials let them enroll after a 2019 change to that state's medical marijuana law got rid of a residency requirement and instead allowed  any “person” to register for a card.

Governor Michelle Lujan Grisham's administration said the change was meant to help people with medical cards in their home states purchase pot in New Mexico, not to allow any person to register for the state's program. Still, state District Judge Bryan Biedscheid ruled in favor of Rodriguez and the other petitioners in late August — a decision the state plans to appeal. 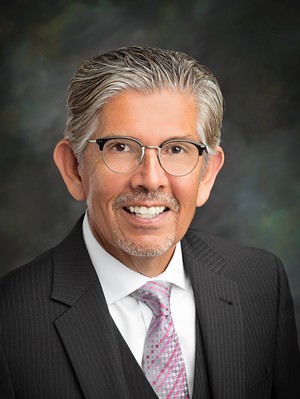 Duke Rodriguez
Ultra Health
Rodriguez, who has been diagnosed with post-traumatic stress disorder, said having access to medical marijuana in New Mexico will help his health. He spends about half his time in New Mexico because his company is a top cannabis distributor there, he said, but he hasn’t been able to purchase marijuana in the state until now. He said the ruling is a victory for others who will be able to access medicine when they couldn't before.

But Rodriguez could also stand to benefit financially from growth in New Mexico's cannabis industry, particularly if Texans with limited access to cannabis in their own state flock across the border to obtain cards in New Mexico.

The court ruling, if it stands, may also change the game for Arizonans, creating new options for residents along the border with limited access to dispensaries, or for those who haven’t been successful getting medical marijuana approval in-state.

Though Arizona has about 130 dispensaries, most are concentrated in cities, far from the rural areas that border New Mexico. Plus, while Arizona’s medical marijuana program now requires a fee of $150 to the state every two years, (cards issued before August 27 are still only good for one year), New Mexico’s medical card lasts three years and doesn’t charge that fee.

New Mexico's cannabis industry already has experienced fast growth. Though the state has just over 2 million residents, it now has 91 dispensaries — nearly as many as in Arizona, which has about 5 million more people.

Arizona is “going to have to sit up and take notice of what’s happening,” Rodriguez said. “It’s going to make Arizona reflect on whether its fee structure is comparable and equitable.”

Whether or not the ruling stands, New Mexico’s changing marijuana policy signals a nationwide shift toward reciprocity, or allowing tourists with medical cards in their home states to access marijuana while out of state. Hawaii and Nevada, for example, have such laws, according to Scottsdale Research Institute’s Dr. Sue Sisley, who studies cannabis.

“It’s appropriate that if patients are legally allowed to get access to medical cannabis in their home state that when they’re traveling, they should be granted similar access,” Sisley said. Duke Rodriguez, CEO of Ultra Health, is the first Arizona resident to get a New Mexico medical marijuana card.
Ultra Health
That’s not yet the case in Arizona, where out-of-staters with medical cards can legally use and possess  marijuana, but can’t purchase it. Demitri Downing, executive director of the Marijuana Industry Trade Association of Arizona, told Phoenix New Times that he hopes to change that soon.

“We’ve decided that our legislative agenda for 2020 will be to bring reciprocity to the state of Arizona,” Downing said. “And we will fight for reciprocity every year until we get it.”

While New Mexico opening its medical marijuana program to nonresidents could mean some lost business for Arizona’s industry, Downing said there’s also an upside — it will educate legislators on why Arizona might want to consider such a change.

Downing says another item on MITA-AZ’s legislative agenda will be to remove the government from doctor-patient conversations around medical marijuana, giving doctors, rather than legislators, full power to determine whether a patient should get a prescription.

Beyond that, an initiative to legalize marijuana use for all adults in Arizona is also expected to hit the ballot in 2020.
KEEP PHOENIX NEW TIMES FREE... Since we started Phoenix New Times, it has been defined as the free, independent voice of Phoenix, and we'd like to keep it that way. With local media under siege, it's more important than ever for us to rally support behind funding our local journalism. You can help by participating in our "I Support" program, allowing us to keep offering readers access to our incisive coverage of local news, food and culture with no paywalls.
Make a one-time donation today for as little as $1.
Ali Swenson was an editorial fellow for Phoenix New Times starting in 2019.