A Tribute to The Brand's Sarah Shelton 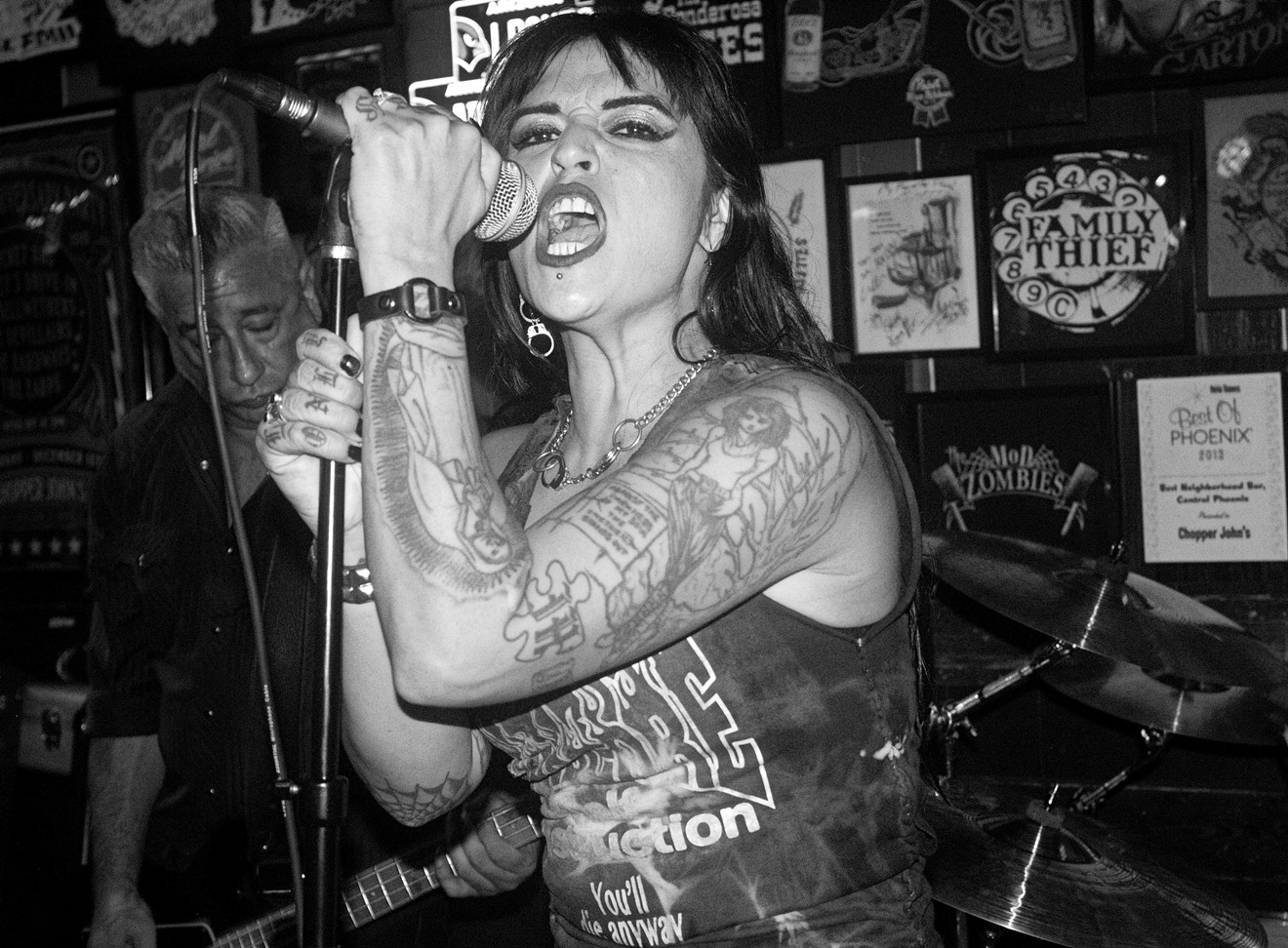 The late Sarah Shelton of The Brand with bassist Danny Bravo in the background at Chopper John's in Phoenix. Karl Wentzel
Editor's note: There will be a Sarah Shelton Celebration Show at noon on Sunday, February 16, at Chopper John's, located at 2547 East Indian School Road. It will feature performances by Mighty Sphincter, Glass Heroes, Fat Grey Cat, and many more. (Full disclosure: Several Phoenix New Times contributors will be performing.) Proceeds will benefit the Shelton family. Click here for more information. This article originally ran on January 2 as a tribute to Sarah.

Local punk rock singer Sarah Shelton of The Brand died on December 22, 2019, of natural causes at the age of 38.

Sarah Shelton is survived by her husband, Steve Shelton, and stepdaughter, Juliet, as well as her father, stepmother, two brothers, a sister, a niece, and an extended family of friends, former bandmates, and admirers. Sarah was truly a legend in the making, and we can only hope there will be more like her to follow in her footsteps. One can only feel there was more art for her to make and more songs for her to sing.

Sarah was a force to be reckoned with as both a musician and a fan. Not only was she a supporter of the “scene,” but she was also an artist, poet, and a budding activist. Sarah embodied punk rock in a way that many of us can only aspire to, and she did it with a strength and grace that was truly inspiring.

Steve was her soulmate and bandmate in The Brand. Seeing the two of them together was enough to give even the most loving couple a new height to aspire to. Calling their relationship beautiful only scratches the surface. Since 2015, it was rare to see them apart, and the way they looked at each other when they were out in public probably made more than a few people envious of what they obviously shared.

“Let’s face it. We would have thought it would have been me going, and she would carry on my legacy and made sure they remembered me. I didn’t expect it. It’s indescribable devastation on our part,” Steve says before continuing:

“This gal was extraordinary. Everyone she met gravitated to her. She passed in her sleep. I woke up and made us some coffee. I was going to give her a few extra minutes to sleep, and I went to wake her up. I couldn’t revive her.”

According to Steve, Sarah had been creating some amazing art over the last several years, and there is an extensive collection, including a particularly powerful self-portrait that hangs in the Phoenix home the couple shared with their stepdaughter and dogs, one of which, sadly, died just days after Sarah. To hear him talk about his late wife with a mixture of admiration, sadness, and love is absolutely riveting.

While we were talking, Steve brought up a night in July 2019 when the Sheltons were guests in my home. My wife and I were hosting a dinner for Lydia Lunch and invited the Sheltons, who had met the legend the previous night at Valley Bar, to join the fun. It was awesome to see Lunch and Sarah engaged in deep conversation at our dinner table like two stunning equals comparing notes on being a badass.

“I think Lydia had a little crush on Sarah,” says Steve. It certainly seemed like that may have been the case.

The loss of Sarah will be felt by the Phoenix music community and her bandmates. Sarah Shelton and her husband, Steve, tearing through one of The Brand's tight punk rock songs.
Karl Wentzel
“She always stood out in the crowd. We connected instantly. Same vibe. Same groove. She was Chicana. I’m Chicano. There was that for sure. She was very vocal and proud of being Chicana and Native American, but she was for all equality all the time. She was totally well versed in the arts, from literature to cinema and everything in between,” says The Brand's bass player, Danny Bravo.

On stage, Sarah prowled around as if she was daring the audience to step into her world regardless of how her health was holding up. She was a powerful singer and a stronger presence onstage. The Brand were poised to make an indelible mark on the Phoenix scene after joining forces with local punk label AZPX Records. Most recently, The Brand played Chopper John’s with former bass player and ex-U.S. Bombs member Steve Davis’ band Stevie and the Sleaze on December 14, even though Sarah was not feeling well.


If you listen to stories about Sarah, her strength always comes up.

“When Sarah did something, she gave it her all. She had strong convictions in her own boundaries, as well as her triumphs. She loved with her whole heart. The strength she displayed through her music was an encouraging factor for others, especially females, exemplifying a ‘you can do this too’ sort of attitude. She was not shy about her own struggles, which allowed her to relate to others as an equal. Most felt comfortable relating to her,” says friend Dee Moreno of Thee Bad Janets.

AZPX’s Rob Locker had this to say about Sarah:

“AZPX didn't choose The Brand. The Brand chose AZPX. They could have handpicked any record label, but both Steve and Sarah were steadfast to be on our little family cooperative version of a record label. Her ‘anti anti anti’ stance on all injustices aligned with ours in the most positive ways. Fierce, brilliant, loyal, and creative just begins a description of Sarah. This is a heavy loss.”

Labelmate Michael Pistrui of Fat Gray Cat is organizing a benefit concert to help with the unexpected expenses. While that event is in the planning stages, there is also a GoFundMe page set up.

“I thought this type of show all day with bands at her favorite place (Chopper John’s) was a way to honor her and help Steve. I started working on it the day I heard of her passing. It was the first thing that came to mind as a way to help,” says Pistrui, who shared the bill on what would be Sarah's final performance.

Services will be held at noon on Saturday, January 11, at Hansen Mortuary, 8314 North Seventh Street.
KEEP PHOENIX NEW TIMES FREE... Since we started Phoenix New Times, it has been defined as the free, independent voice of Phoenix, and we'd like to keep it that way. With local media under siege, it's more important than ever for us to rally support behind funding our local journalism. You can help by participating in our "I Support" program, allowing us to keep offering readers access to our incisive coverage of local news, food and culture with no paywalls.
Make a one-time donation today for as little as $1.