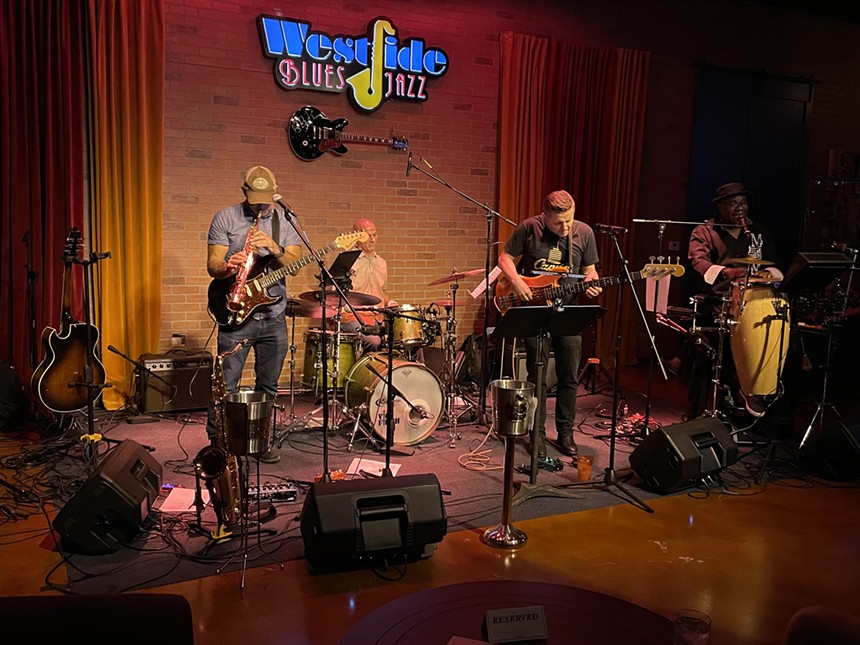 As an entrepreneur with 40 years experience, Paul Vincent Perez knows how to flourish amid harrowing circumstances.

"Entrepreneurs, they just figure out how to do it," he says.

Yet even Perez felt the burn when he was suddenly opening his own music venue, Westside Blues & Jazz, amid a global pandemic.

"When COVID hit, we were literally three weeks from opening," he says. "We were interviewing employees when we got told we couldn't open up. So I got kicked in the nuts."

But Perez was dedicated — Westside has been a "bucket list item ... for 25 years," he says, dating back to when he began tuning into jazz in the 1970s.

"I was into rock 'n' roll," Perez says of the time. "I had a Walkman and my buddy gave me a cassette tape of Lee Oskar's Before the Rain. From that moment, I listened to more blues. I used to go meet my buddies [at Chars] to pick up chicks."

He adds, "My mother was a musician, and so I was exposed to classical stuff and a little jazz. But it was Oskar's tape that changed my whole perspective on music. And, of course, my girlfriend and partner [Cindi Jackson]'s uncle, Lou Garno, was a famous sax player."

So Perez and Jackson persevered, completing much of the design work themselves. By adding in dividers and rolling out other COVID-19 measures, Westside finally opened in April 2021.

Those early months included their own unique challenges — Perez says the experience was "supposed to be a little chiller than this." But he was prepared to weather the storm.

"My landlord was decent," Perez says. "We sat down right off the bat and I said, 'Here's the scoop ... you got to help me out here ... we're all going to be in pain.' Usually your growth starts in your first 90 days ... we're starting the growth late, but I anticipated that."

Part of the process was embracing COVID protocols as part of regular operations.

"We took a big hit in September," Perez says. "We did vaccination only. I thought we'd take a hit of 20 [percent], and we took a hit of 30 to 40 percent. So, Plan B, we got a testing booth out here — instant testing for free five minutes." There's a speakeasy vibe at Westside, which includes a sizable menu of cocktails.
Westside Blues & Jazz
Despite calling it "the right thing to do," Perez has gotten flack about the measures.

"You won't believe some of the emails and phone calls," he says. "They go ranting and raving that we're communists and Nazis and fascists. Well, I can't be all three."

Because, as Perez sees it, this "system" is "going to be a part of life you just go through," and he'd rather deal with bureaucracy than remain closed.

Perez said Westside's first year has been worth the effort, and it's been a time to actually celebrate the local scene he's followed for decades.

He hopes he can bolster the legacy of great jazz and blues in the Valley. Because while The Nash, Chars and The Rhythm Room remain vanguards, Perez has a different vision in mind.

"There were clubs all over the place," Perez says of the heyday of jazz clubs in the Valley. "There were smoky rooms, and you go in and it was just a whole different atmosphere."

That speakeasy vibe, complete with a sizable menu of cocktails and Chesterfield-style chairs, has been a hard sell for a mid-pandemic audience more accustomed to other setups.

"The audience comes in and treats it like a show," Perez says. "They listen to music and leave. It started with COVID because of the dividers. I'm trying to change that, and to say, 'No, you can come in early and have a cocktail and relax.' They're not used to that because we haven't really had any real nightclubs in the last five or 10 years.'"

Luckily, Perez already has plans to counter this tendency.

"We're going to start doing a little two-piece band for the first 45 minutes," he says. "To get people in earlier and get them used to, like, 'No, you can just come in and have a cocktail.'"

But Perez knows he's on the right track when some folks recognize the value of Westside's setup.

"We have a lot of people from back East," he adds. "They say, 'I don't feel like I'm in Arizona anymore. I just feel like I'm in Chicago or somewhere.'"
Perez said the configuration, with no seat "further than 26 feet from the stage," helps folks socialize while enjoying great music.

"Before we opened up, our motto was, 'All shared seating; meet a new friend,'" Perez says. "As long as all of [the guests] don't mind, I'll go over and say, 'Meet your new friends.'"

He adds, "[The artists] like the atmosphere. They've got a professional sound system and lighting and the acoustics are perfect. It's intimate, but not too big and not too small. And I leave them their leeway to do new music."

All of that is essential for building a club where fans engage intimately with artists.

"We have musicians come in here all the time," Perez says. "Francine [Reed] was in [the other] night, and she got up and sang a couple of songs out of the blue. George Benson was in here, 'cause he lives in town. [He] just had a cocktail and [listened] to music."

It helps that Perez has put ample effort into booking local blues and jazz acts exclusively. Luckily, he's had some help in that regard.

"We have an in-house band coordinator; it's Mike Reed, from the famous Reed family [Margo and Francine Reed]," Perez says. "So he knows music and he knows all the people out here. And he knows what I want as far as the quality."

He adds, "I want to introduce new bands, but they just got to have the quality. We have people send their résumés, and I tell Michael, 'Tell me what you think. Do you know him?' So that's been a great help and he's been invaluable."

Perez hopes this locals-only focus will help with his larger mission statement: opening up jazz and blues to a greater audience. That begins with his beloved West Valley, which he said has heaps of potential and not nearly enough entertainment options.

"I've lived in the West Valley my whole life. Well, 40 years," he says. "The West Valley was where I wanted to be. I did my demographic studies, and it's just perfect. It's got access to the freeway. And [59th Avenue] is the busiest road in this state. Because nothing's ever here, or someplace opens up and six months later, it's gone."

That's only the start, though, and Perez has larger goals for promoting jazz and blues.

"We're finding out our demographics are in the mid-40s and 50s," Perez says. "But we're getting a lot of the 20-year-olds. I encourage my people to bring their kids; we allow kids in here for free with their parents. Because I want to expose kids to good live blues and jazz music. It just [takes] one song."
And a "younger" crowd has meant a specific focus on marketing the club.

"We get a lot of repeat customers," Perez says. "I speak to every customer every night, and 75 percent of guests are from word of mouth. And I spend a lot of money on advertising. When building an audience, you've got to have that human element."

Perez has even more plans to further grow Westside. For instance, more "themed" nights at the club.

"If you look at our lineup, we have a lot of old-school bands," he says. "We bring in The Rocket 88's and Big Pete Pearson. I want to bring in reggae, man. But can I get an audience with a reggae band?"

Perez adds they even held a "French night," and that event's success was a huge inspiration in his plans to strategically expand the club's calendar.

"We're only open for four days," Perez says. "We were originally going to be open six, but we'll expand it as the market allows." Those open nights, Perez adds, could be available to "punk or comedy" shows to help other groups getting their start with live entertainment.

Perez also plans to put on a festival this spring or summer, taking place in the club's parking lot (with permits, of course). He has asked other venues to participate.

Perez could eventually book non-local acts, saying it "just gives a little more credibility to the club when you have a national or even a regional band." And that doesn't even include plans for the big April 9 anniversary "blowout show."

But if it seems like Perez wants to conquer the local music industry, his ambitions aren't quite as grand.

"I'm not looking for expansion," he says. "But if you want to use my name, that's fine." He talked about a local Irish pub that grew too big and lost its inherent charm, a future he wants to avoid for Westside.

Because even after this added work for a "retirement hobby," Perez aims to get back to his first plans: "I want to get it set up so me and my girl can travel, come back in a month and know that someone's taken care of it," he says.

That means Perez just has to find "the right staff, the right band coordinator and the right musicians." But even then he won't be able to pull away completely. Because the last two years have only tempered Perez's love of jazz and blues, and he's dedicated in making the most of this club, no matter where he's traveling.

"With all the electronics nowadays, you can do everything online," he says. "Check my reports, look at the cameras."


Westside Blues & Jazz is located at 17045 N. 59th Ave. in Glendale. For more info and a list of upcoming shows, check out their official website.
KEEP PHOENIX NEW TIMES FREE... Since we started Phoenix New Times, it has been defined as the free, independent voice of Phoenix, and we'd like to keep it that way. With local media under siege, it's more important than ever for us to rally support behind funding our local journalism. You can help by participating in our "I Support" program, allowing us to keep offering readers access to our incisive coverage of local news, food and culture with no paywalls.
Make a one-time donation today for as little as $1.
Chris Coplan has been a professional writer since the 2010s, having started his professional career at Consequence of Sound. Since then, he's also been published with TIME, Complex, and other outlets. He lives in Central Phoenix with his fiancee, a dumb but lovable dog, and two bossy cats.
Contact: Chris Coplan
Follow:
Twitter: @CCoplan