For Greyhound Soul's Joe Peña, Music Runs in the Family 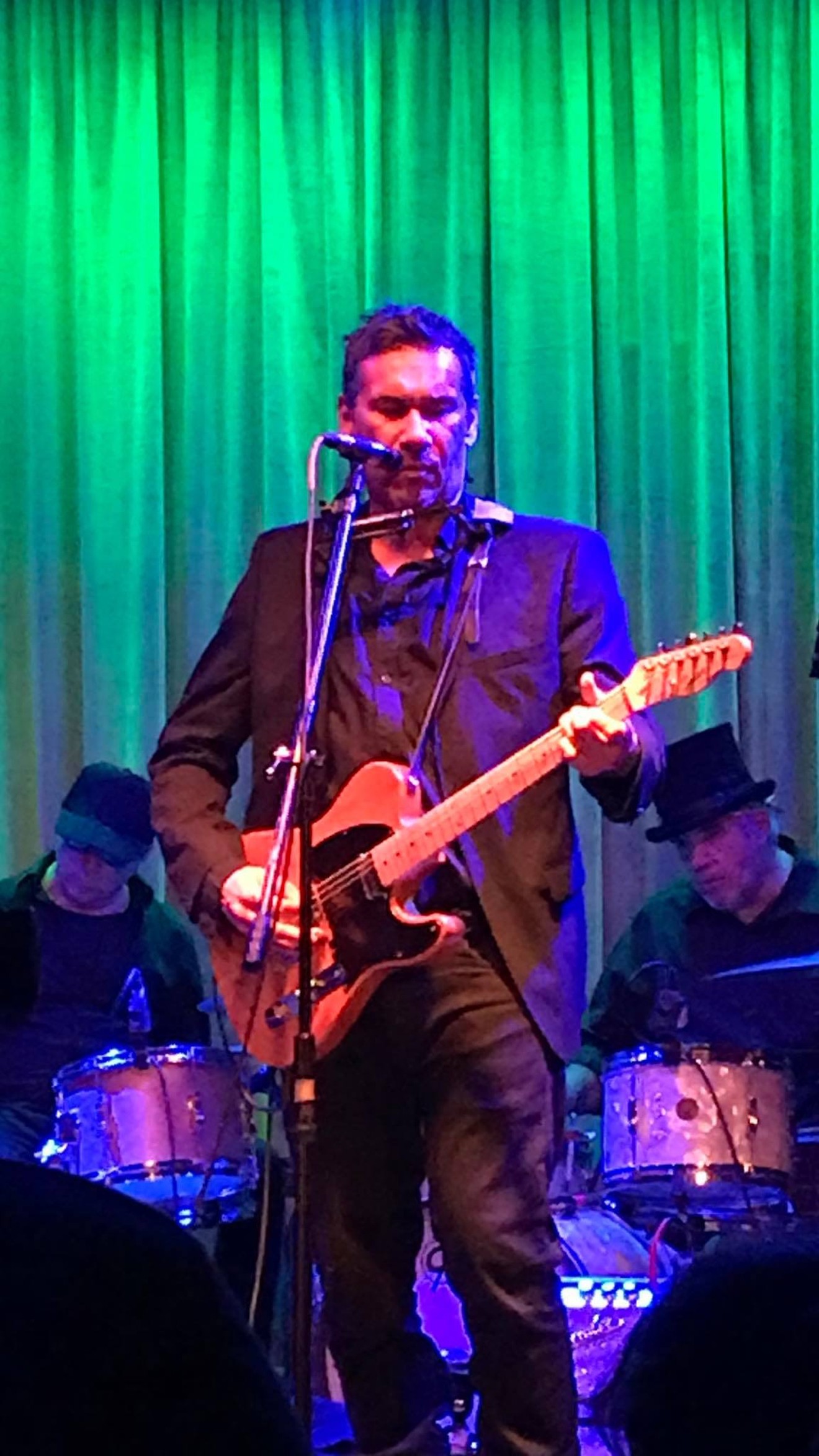 Joe Peña on stage at Crescent Ballroom. Hans Ferguson
Greyhound Soul guitarist/lead vocalist Joe Peña has come a long way since his early days. Originally hailing from Elgin, Texas, he comes from a bloodline of well-rounded players, and is a fourth generation musician himself. As he describes it, there was always someone playing or listening to music in his childhood home in east Texas. So it would seem natural for him to take to the music and band life like a prince waiting in line for his crown. However, that was not the case.

Peña started on drum kit at age 11. At age 13, his father gave him a 1959 Gibson Les Paul Junior in an attempt to get him to switch instruments. He wasn't convinced until Joe, then in his mid-20s, and his mom moved to Tucson, where he realized how much he loved music, the guitar, and wanted to start his own band. (There was also the added advantage of not lugging around a drum kit anymore.)

Fast forward to 2018, and Peña is now a guitarist and songwriter who's fronted his band, Greyhound Soul, for over 20 years, an impressive feat for any musician or project. In August, he released a solo album, Dust of Our Love. He'll be in town with the rest of Greyhound Soul, performing Saturday, October 20, at Last Exit Live along with Ghetto Cowgirl. With the new album out and the show coming up, New Times was able to get some words in with Peña about his gear, his new record and the band's upcoming show.

What's the secret weapon of your sound? And how did that help you find your "signature" tone?
I would say mid-range is my secret weapon. I would say a couple things to being a musician would be learning how to play your instrument, second figuring out how you really want to sound. For years playing with loud bands, I needed to find a way to have my voice and guitar cut through. I discovered guys usually use too much bass, or treble. We pretty much left that mid-range alone when we were kids. Didn’t know what it was! Now it’s a big part of my sound.

What's your favorite piece of gear in your collection and why?
My favorite piece of gear would be my 1959 Les Paul Junior my dad gave me on my 13th birthday. I don’t play it very often, and it pretty much stays in the house, but it’s my first guitar. I learned to play the blues on it, and that pentatonic scale I still bust out when I need to throw down a lead.

Any special pieces of gear acquired over the years? Any special story, or stories, behind your collection of tools?
There is a story about that 59 Junior my dad gave me. My grandfather owned this gas station back in Texas before I was born. He’d lend people money, or just give it, and people would also leave stuff as collateral. There was this old blues guy called Hoagie Rocks who was kind of a famous guitar player back in the day ... in Texas anyway. It turns out he pawned that guitar to my grandfather and never came back for it.


Just listened to “Memphis” from recently released solo album Dust of Our Love. Amazing work and touching piece lyrically, thank you for sharing. You had said during our phone call that you played all the instruments on the record. How did you go about tracking this song for your record and what does the song mean to you?
Well I played most of the instruments on the record. Bill Elm, of Friends of Dean Martinez, who also did the music for a video game called Red Dead Redemption, also played on the record and did a lot of the production work on that as well. The song "Memphis" came to me after hearing a good friend of mine, Andrew Brown, had died in France who was a great influence on me as an artist, and a human being. It’s a combination of things that were happening in my life. I guess France turned to Memphis, and well the rest is whatever it is.

You mentioned when you were growing up that you were surrounded by music, including watching your dad rehearse constantly in your living room. You also said you never thought the “band life” was going to be for you. And now you have been an active in the Arizona music scene for over 20 years. What ignited that change of opinion?
My dad's band practiced all the time. The smell of weed was always in the air, beers clanking, instruments all over the house, those guys figuring out parts. Looking back I know now they were having a blast I guess. All I knew was they were keeping me and my brothers up all damn night, and we had to go to school in the morning. The music life was something I never wanted. Guess what changed was my parents' divorce. We moved to Arizona from just outside Austin, Texas without ol' pops because of his music and all the trappings that come with it. Somewhere down the road I guess I missed having instruments all over the house, beers clanking and figuring out parts with friends. For me that was what families did, and I guess it was the only connection I had to my past, my dad, and the life we needed to escape. It became something I needed to do and for some reason I can’t stop.

Peña hanging in Tucson.
Jimi Giannatti
Greyhound Soul has a show coming up this Saturday, October 20, at Last Exit Live. Any words you wish to share with readers about your upcoming performance?
We’re gonna have a blast, Last Exit is a great venue and we are looking forward to it. I’ll be doing the solo project band at Yucca Tap Room November 16 with the guys that played on the record.
KEEP PHOENIX NEW TIMES FREE... Since we started Phoenix New Times, it has been defined as the free, independent voice of Phoenix, and we'd like to keep it that way. With local media under siege, it's more important than ever for us to rally support behind funding our local journalism. You can help by participating in our "I Support" program, allowing us to keep offering readers access to our incisive coverage of local news, food and culture with no paywalls.
Make a one-time donation today for as little as $1.
Henri Benard
Contact: Henri Benard