WTF Is Going On With the Unity Summit Music Festival? 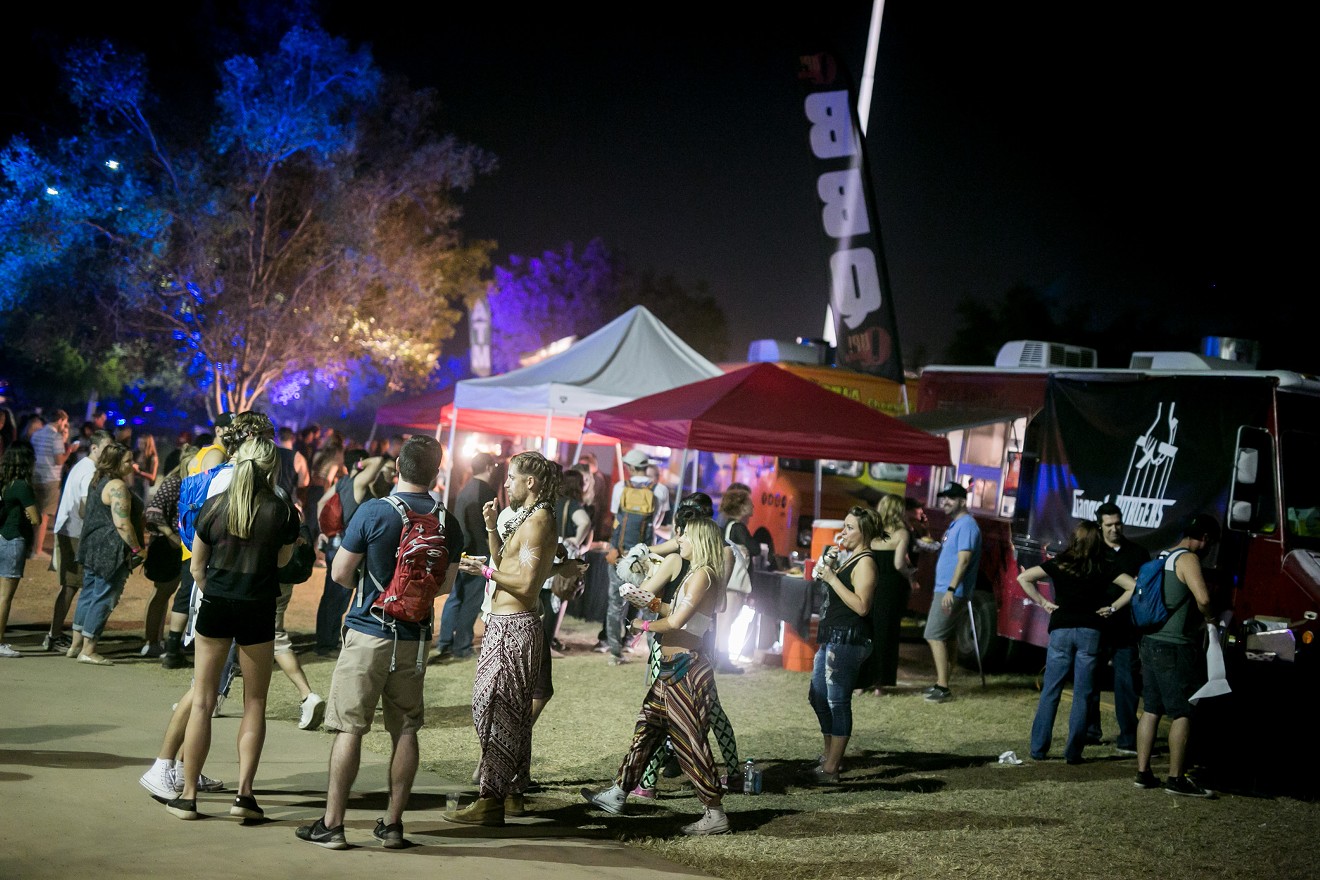 Lost Lake was cancelled despite a killer lineup. The Unity Summit Music Festival doesn't even have that. Melissa Fossum
With all the concert and festival announcements coming out in the last few weeks, we are disappointed that we overlooked one that promises to be the “biggest splash in recent Arizona music history.”

As we all know, promises are meant to be broken, and music festivals seem to be especially bad at keeping them. The Fyre Festival, for instance, promised its wealthy attendees a star-studded weekend in the Bahamas and was promoted by mega-famous models such as Bella Hadid and Kendall Jenner. When ticketholders arrived, they did not find the gourmet meals and luxury accommodations they expected, but were instead dumped on an empty beach with no shelter, toilets, or cellphone service. Only one band, a local act, played the festival, and the only food there were cheese sandwiches. Organizer Billy McFarland has since been convicted of fraud.

Obviously, a disaster on the scale of the Fyre Festival is hard to reproduce, but a brief scan of the 2018 Unity Summit Music Festival's Facebook page may conjure up similar worries. According to the page, the festival will take place at 4:20 p.m. (get it?) beginning Saturday, November 10, at 1901 North Alma School Road in Mesa, which also serves as the site of the Scarizona Scaregrounds. They says they are expecting a crowd of up to 50,000 people to enjoy food, fun, celebrities, and an eclectic lineup of artists on three stages representing all genres of music.

In addition, 10 satellite locations throughout the Valley will be hosting events and various social media and streaming outlets will be broadcasting the event.

There's one problem: No one from the festival wants to share with Phoenix New Times a complete list of who is performing.

Obviously it's impossible to know what will happen on Saturday or whether the fest will live up to its hype, but this is an unusual strategy considering the performers are the main draw to any festival, but even a killer lineup is no guarantee of success. Just ask the organizers of this year’s Lost Lake Festival. Despite a stacked lineup of SZA, Future, Imagine Dragons, The Chainsmokers, and Janelle Monáe, the event was canceled, likely due to poor ticket sales, according to Billboard.

If you are lucky enough to get a $75 early-bird ticket to the Unity Summit Music Festival, then your cost is less than the three-day general admission tickets of Lost Lake, which began at $169.50. It gets significantly pricier from there. Two-day general admission tickets are going for $200, and The Double U Pass for $1,200, which includes two VIP rooms and access to the other 10 venues. Tickets are available on the festival’s Eventbrite page.

New Times attempted to contact organizers through phone, email, and Facebook Messenger. A Messenger reply from the festival’s Facebook page was received on Saturday evening, with the email address for a person named Gio from Jackfruit Studios. We were then asked via Messenger if we were available to meet in person this week. Upon learning it was not possible, the person corresponding on behalf of the festival’s Facebook page sent the following message:

Screenshot of our conversation with the Unity Summit Music Festival.
Jason Keil

“We do everything in person. Therefore unless we meet face to face & have a discussion as well as you sign a NDA (non-disclosure agreement). No information will be given. Thank you.”

When asked for the name of whom we were speaking with, we were told again to contact the email address. As of press time, we have not yet received a response.

Scattered among the Facebook posts soliciting for investors, sponsors, and performers are some details about the event. They shared a video of rapper Luke Gawne from Oak Park, Illinois, practicing his flow for the show. Supposedly, Maya New York Pizza Bar and Grill, located at 223 East Brown Road in Mesa, will be one of the satellite venues. When contacted by phone, a woman named Rose Lovato, who said she works with the festival, told New Times that the event was still happening, but could not immediately confirm any information about the lineup.


New Times went down a rabbit hole to determine who was organizing the Unity Summit Music Festival. The search began with a YouTube video featuring founders Runar and King Trick that claims it is being filmed at the venue, but details are vague at best.


The Runar in the clip is Runar Berntsen. According to his Facebook page, he is the director of the upcoming independent film Melody, which is being released by the aforementioned Jackfruit Studios. He also holds the title of co-founder of the Unity Summit Music Festival. According to a video on his profile, he and King Trick hang with cool people like actor Hasaan Rasheed who, according to his IMDb page, played a member of the Kings Guard in the Marvel Studios film Black Panther, but was uncredited in the film. Berntsen has not returned our messages as of press time.

According to the festival’s website, it is being presented by Klickjam, a music networking website founded in 2015. There has not been a post on their social media pages since March. The site’s former president and CEO Derek Draven appears to have sold Klickjam.com to Delyric Entertainment, according to a post on the local company’s Facebook page.

Delyric Entertainment is “powering” the Unity Summit Music Festival, according to the event’s website (which was created on WordPress, by the way). The company was founded by Alexandra de Scheel, who raps under the moniker of Delyric Oracle. Her Wikipedia page says she is also an activist and author. When you Google the former mayoral candidate’s name, the second result is a Fox 10 report from June about how she used a photographer’s pictures without his permission on her campaign website, which has since been taken down. Her YouTube profile features videos about the liberal media. One is titled “Trump Is The Only Non War Criminal President.”

As for the event's theme, it’s unclear what summit this music festival is supposed to commemorate. The CHANGE Philanthropy Unity Summit, which is held every three years, took place in New Orleans last year, so celebrating this conference seems unlikely.

Overall, the lack of information over who's playing the festival and what exactly is supposed to happen there leads us to believe that it's unwise to buy tickets. We don't want to put our readers into a Fyre Festival-type situation, but if you're curious (or foolish) enough to attend the Unity Summit Music Festival, contact culture editor Doug Markowitz at [email protected].
KEEP PHOENIX NEW TIMES FREE... Since we started Phoenix New Times, it has been defined as the free, independent voice of Phoenix, and we'd like to keep it that way. With local media under siege, it's more important than ever for us to rally support behind funding our local journalism. You can help by participating in our "I Support" program, allowing us to keep offering readers access to our incisive coverage of local news, food and culture with no paywalls.
Make a one-time donation today for as little as $1.