Noonday Devils Have a Huge Sound for a Two-Piece Band 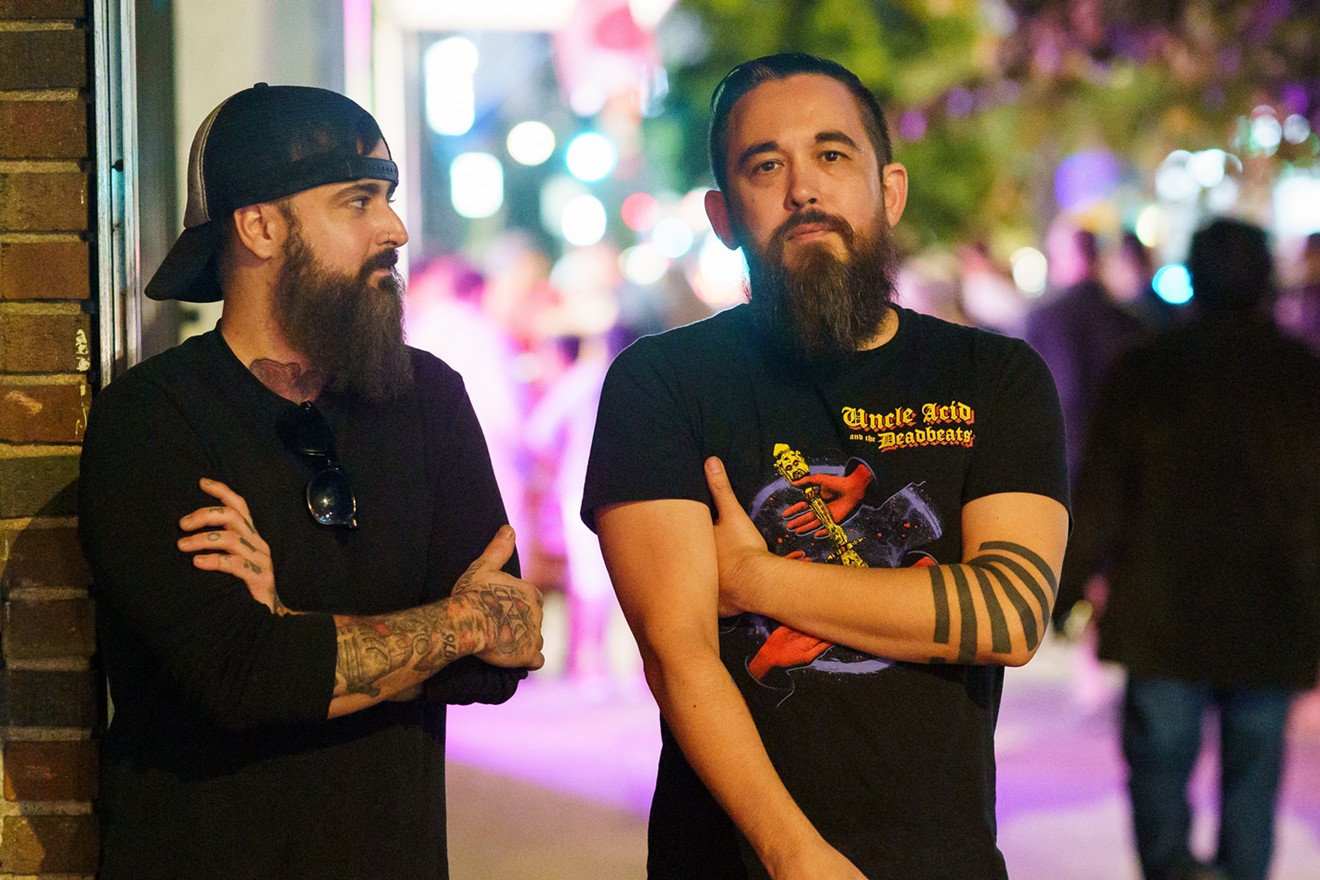 Noonday Devils are releasing a new album, Bitters, on January 17, and celebrating with a release party at The Beast at Cornish Pasty Co., located at 960 West University Drive in Tempe, the next day. But that’s only a few of the exciting things about this rockin’ new record.

The band, which features Freddy Crounse on guitar and vocals and drummer Joey Floortom (a.k.a. Joey Jakovac), have a huge sound for a two-piece and been putting together a, dare we say, great resumé during their relatively short history. Formed in 2015 after the demise of their previous band, The Herps, Noonday Devils are coming into their own on their first Fervor Records release.

For the uninitiated, Fervor Records is a local label that specializes in getting placements for their artists in movies, television, and advertising. While they work with a fair number of current artists, they don't release new material on vinyl often, but they're releasing a limited run of red “wax” editions that will be available at the show.

"Jeff (Freundlich) and David (Hilker) at Fervor have been a dream to work with. We recorded in both of Fervor's studios, and they left us unshackled to explore and take our time with the whole process. Seriously, we were expecting a nightmare of deadlines and 'creative input' from the execs, but they let us do our thing, and I think that translates on the album. They've got a great thing going on there," says Crounse.

For Hilker and Freundlich, it seemed like a no-brainer to work with the band.

"As soon as we heard the band's demos, we knew they had something special. The songs were basically there, so we just needed to pair them with the right producer and turn them loose in the studio. I think the results (on Bitters) speak for themselves,” says Hilker, the label’s CEO.

The producer they found was none other than Phoenix legend Bruce Connole, who has been in a few local bands as well: The Jetzons, The Strand, and Suicide Kings. He was a great fit for the well-rounded sound of Noonday Devils, and it doesn’t sound like he needed his arm twisted to work with them.


"Obviously, I like what they do, or I wouldn’t have spent so much time on it. [Crounse is] a great songwriter, and Joey’s an innovative drummer who comes up with parts that are anything but pedestrian. Picky bastards, but it definitely worked as a collaboration," Connole shares.

The feeling was clearly mutual between producer and band.

“It was a true pleasure working with Bruce Connole on this album. He 'gets' us, so recording and mixing the record, as arduous as it was, was made that much easier by the shorthand we developed during the process,” Crounse says.

With Bitters, the Noonday Devils give the listener a healthy dose of stony, bluesy, post-grunge hard rock. That’s a mouthful, for sure, but one could also say the band have developed a unique sound during their five-year history. Crounse has a strong, clear voice that has no problem adding some gravel when the song needs it.

As a guitarist, Crounse is no slouch either, weaving riffs around Floortom’s muscular drumming that give subtle nods to bands like Queens of the Stone Age, Reverend Horton Heat, and Band of Skulls. The band enlisted longtime scene veteran Michael Parkin (Blanche Davidian/Skink/Emperor Asshole) to lay down bass tracks in the studio, but will remain a two-piece for the live shows.

"Bitters is an examination of dysfunction and codependence, and a distillation of the results into bitter little ditties roughly three minutes long," says Crounse. "Don't get me wrong. There's still hope in there. You just have to look really hard to find it ... I'm glad we took that left at Albuquerque and stayed the course."

We’re glad Noonday Devils did, too, just as long as they play “Stuck” off of Bitters at the release show. We love that one.

Noonday Devils are scheduled to perform at The Beast at Cornish Pasty Co., 960 West University Drive, #103, in Tempe, on Saturday, January 18. Tickets are available at the door.
KEEP PHOENIX NEW TIMES FREE... Since we started Phoenix New Times, it has been defined as the free, independent voice of Phoenix, and we'd like to keep it that way. With local media under siege, it's more important than ever for us to rally support behind funding our local journalism. You can help by participating in our "I Support" program, allowing us to keep offering readers access to our incisive coverage of local news, food and culture with no paywalls.
Make a one-time donation today for as little as $1.