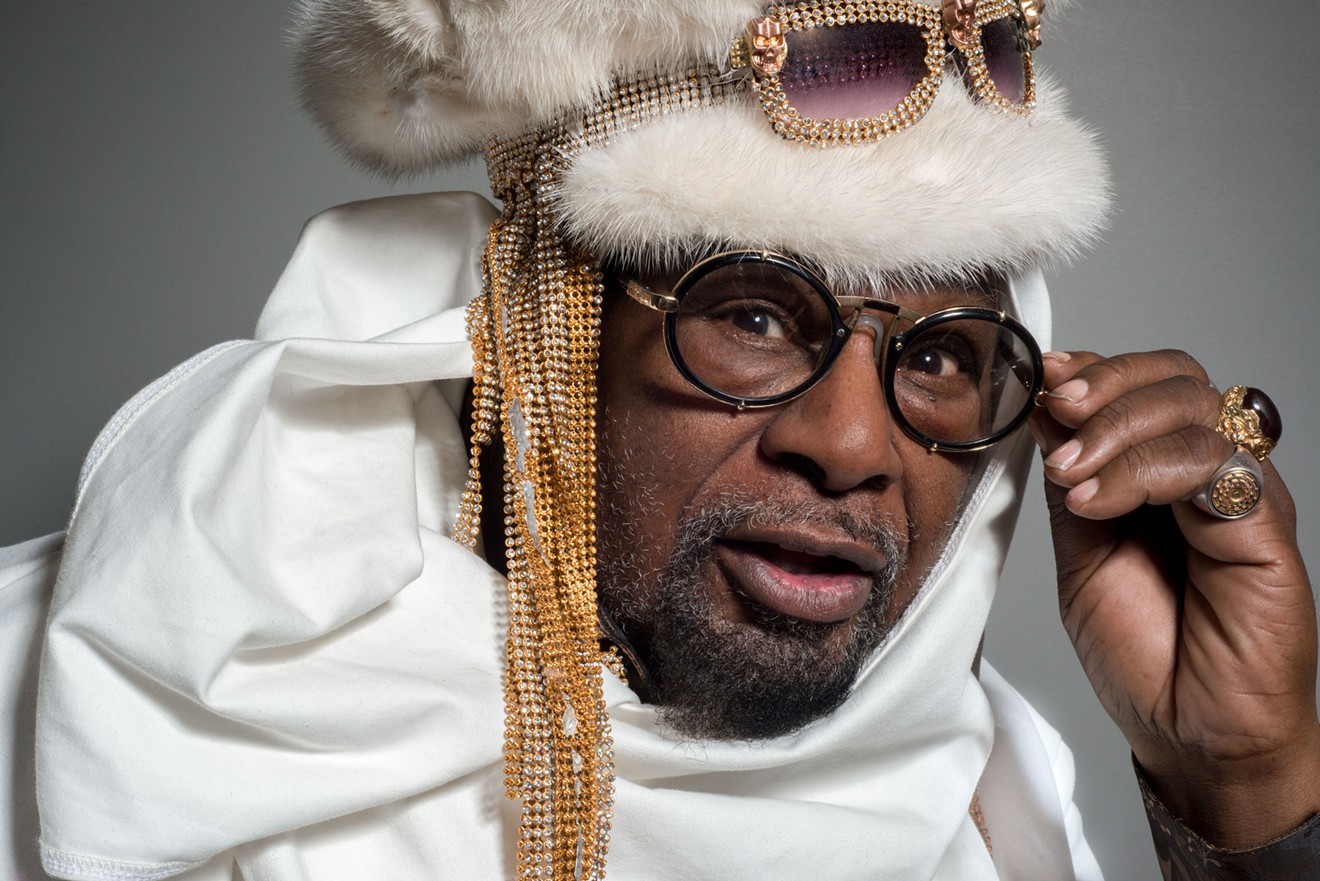 George Clinton is scheduled to perform on Thursday, August 11, at the Marquee Theatre in Tempe. Celebrity Theatre
Heads-up local concertgoers: If you’ve ever wanted to see either funk legend George Clinton or R&B vocalist Teyana Taylor performing live in the Valley, this week offers your final chance to do so. The farewell tours for both artists are scheduled to roll through town over the next few nights and tickets for either show are going quick.

Read on for more details, or you can click over to the Phoenix New Times concert calendar for more live music happening from Monday, August 8, to Thursday, August 11. 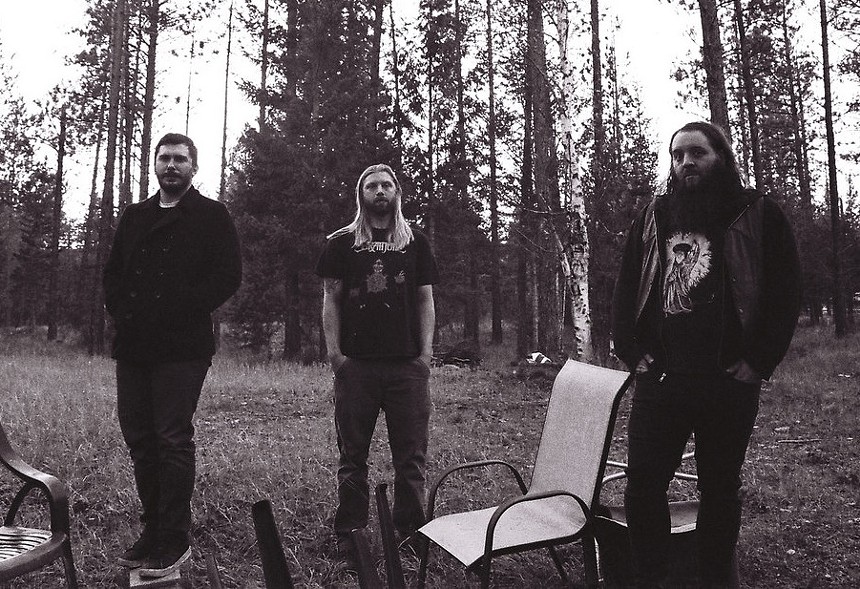 Monday, August 8
The Rebel Lounge, 2303 East Indian School Road
Doom metal hits different. It doesn’t come at you quick and jagged like a Slayer riff. A good doom metal song billows, it flows over you slow, heavy, and oppressive as smoke. It should come as no surprise that there’s considerable overlap between the doom and stoner metal communities. Even before Sleep’s seminal Dopesmoker dropped, metalheads were slow-baking their brains and their riffs. Spokane, Washington-born band Merlock are a sonic Venn diagram of the doom and stoner styles. Their music is dank with smothering riffs, psychedelic imagery, and wispy voices wailing over the din. On 2021’s You Cannot Be Saved, Merlock’s fuzzy guitars and spacey, disassociating vibes create a compelling soundscape to get lost in. You either fuck with a band that uses song titles like "Gloomtrain" and "Grimelord" or you don't, folks. For concertgoers who like their aesthetic a little dark and cloudy, hop aboard this gloomy train when it rolls into the Rebel Lounge. Loserfur, Evergreen, and Sativan open. 8 p.m., $10 via seetickets.us. Ashley Naftule

Monday, August 8
The Van Buren, 401 West Van Buren Street
Dancer, choreographer, and R&B singer Teyana Taylor first broke through into the mainstream in the mid-2000s after inking a deal with record producer and artist Pharrell Williams. After her 2008 single "Google Me" hit big and a debut mixtape From a Planet Called Harlem dropped in 2009, Taylor wooed music scribes with her smoky vocals. A trio of studio albums followed, including 2014’s VII and 2018’s K.T.S.E., as did numerous television and film appearances. Despite being in the spotlight for only a decade and a half, Taylor is staging a farewell tour to focus on her personal life, telling the media in a statement, “Sometimes we gotta take the time to smell our roses even after the last petal falls.” 8 p.m., $34.50/$39.50 via ticketweb.com. Benjamin Leatherman

Monday, August 8, and Tuesday, August 9
Musical Instrument Museum, 4725 East Mayo Boulevard
It wasn't until Ladysmith Black Mambazo's seminal work on Paul Simon's Grammy-winning Graceland that the world truly took notice of the South African a cappella group. But the ensemble has been on a cross-cultural journey from the moment the members came together in the early 1960s. Since then, they've worked with international blues, jazz, hip-hop, soul, rock, and country artists, among others. Founded by Joseph Shabalala, LBM's strength is their ability to transform any song through vocal inflections that range from deep baritone to a soaring tenor. They include precisely timed shouts, shuffles, whistles, trills, and animal-like sounds, along with handclaps and foot stomps for added depth and nuance. The singing style delves from the Zulu traditions of isicathamiya harmonies, something Shabalala took to heart after a series of recurring dreams instructed him to form a musical group. The group's core songs remain based on South African folklore and traditions, mixed with occasional religious and political numbers. But the group has no problem tackling other musical styles, having covered Sam Cooke's "Chain Gang," "People Get Ready" by Curtis Mayfield, Bill Withers' "Ain't No Sunshine," and even Bob Dylan's "Knocking on Heaven's Door." 7 p.m., $54.50-$74.50 via mim.org. Glenn BurnSilver

Tuesday, August 9
Valley Bar, 130 North Central Avenue
Prodigy, like genius or auteur, is a superlative that’s overused. In the case of singer-songwriter Emily Wolfe, though, “prodigy” fits her as snugly as a capo on a guitar neck. Born in Raleigh, North Carolina, but a Texan for most of her life, Wolfe was already playing the guitar at age 5. Not long after that, she picked up drumming too. By the time she was in high school, Wolfe already had the fundamentals of songcraft and instrumentation down pat. While she has worked with producers and musicians with rootsy bona fides, there’s an electronic sheen to her music that’s both unexpected and intriguing. Combining gritty guitar playing with synth sounds and pop production, Wolfe has made her dream of “mixing Demi Lovato and Queens of the Stone Age” come true. Wolfe’s music sounds confident and assured, which makes the doubt and ambivalence in her lyrics more affecting. “Baby, when do you think my life begins,” she croons on “Something Better.” “ 'Cause I don’t know.” With Revolutionary Development; 8 p.m., $15 via seetickets.us. Ashley Naftule

Tuesday, August 9
The Van Buren, 401 West Van Buren Street
A lot of bands like to brag about starting from the bottom, but how many of them got their start busking? Long before they started touring the country and making an impact with their “dark country” sound, Lost Dog Street Band frontman Benjamin Tod and fiddler Ashley Mae were busking on the sidewalks of Nashville. Using old-time instrumentation and raw vocals, the married couple make music that sounds utterly timeless. Lost Dog Street Band could be serenading boxcar hobos in 1922 or crust punks in 2022. No matter where they pluck out their ragged DIY folk music, they sound right at home. On their latest album, 2022's Glory, the band moves in a more stripped-down direction: The drums and steel guitars that made their presence felt on past albums are gone. The more intimate arrangements fit the harrowing and personal nature of Tod’s lyrics as he grapples with his sobriety and how his addictions in the past threatened to destroy both his marriage and his band. Redemption never sounded this haggard and sweet. With Matt Heckler and Jason Dea West; 8 p.m., $27/$30 via ticketweb.com. Ashley Naftule

Thursday, August 11
Marquee Theatre, 730 North Mill Avenue, Tempe
George Clinton is a living legend. The frontman of Parliament-Funkadelic has done much during his career, working with everyone from Snoop Dogg and Kendrick Lamar to the Red Hot Chili Peppers. He is the "godfather of funk," that incredibly distinctive fusion of black-originated genres like jazz and R&B with psychedelic rock. He's also 81 years old, and he seems to be aware that his days on Mother Earth might be numbered. “Even though I feel like I’m just getting started, the reality is the group needs to go ahead and keep it going," Clinton told Rolling Stone in 2019. "I’ve been up there representing for people, but they’ve actually been turning the place out. And we’ve been selling out for the last five years, every night.” Hopefully, they'll keep selling out on their current tour, which is being dubbed his farewell tour. The Motet, Fishbone, Dopapod, and The Pimps of Joytime are opening. 6 p.m., $52-$80 via ticketweb.com. Douglas Markowitz
KEEP PHOENIX NEW TIMES FREE... Since we started Phoenix New Times, it has been defined as the free, independent voice of Phoenix, and we'd like to keep it that way. With local media under siege, it's more important than ever for us to rally support behind funding our local journalism. You can help by participating in our "I Support" program, allowing us to keep offering readers access to our incisive coverage of local news, food and culture with no paywalls.
Make a one-time donation today for as little as $1.
Glenn BurnSilver
Contact: Glenn BurnSilver

Douglas Markowitz was born and raised in Broward County, Florida, he studied at Sophia University in Tokyo before graduating with honors from the University of North Florida with a bachelor's degree in communications. He began writing for Miami New Times while in college and served as their music and arts editorial intern in 2017.
Contact: Douglas Markowitz
Follow:
Twitter: @dougmarkowitz
Ashley Naftule