Music in the Time of COVID: The Dust Jackets Want to Write Timeless Songs 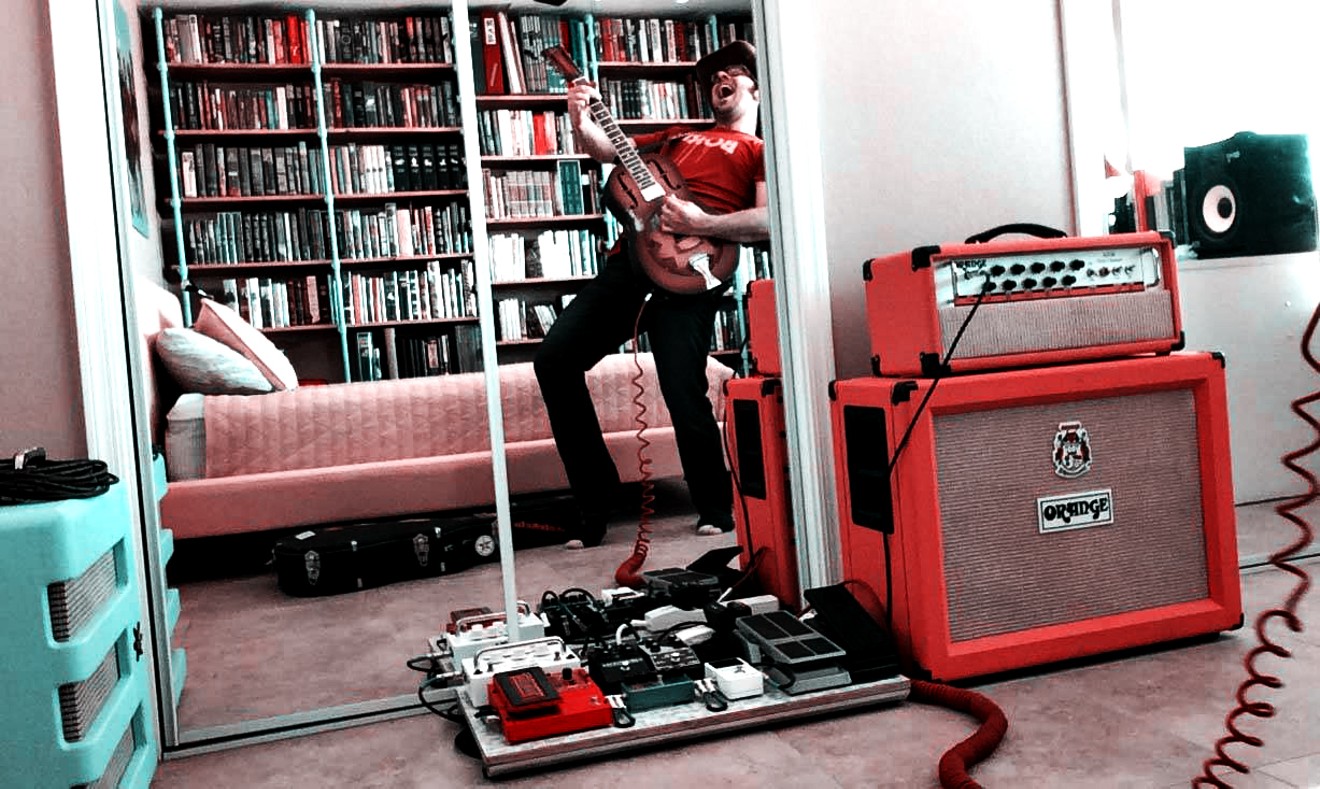 Band leader Andrew Boese rocks out in quarantine. The Dust Jackets
Between the COVID-19 pandemic, a harrowing presidential election, and peak levels of social unrest, 2020 has been a year of strife and chaos. But we forget that amid all this negativity, local artists are still creating great works. Phoenix New Times touched base with musicians from across the musical spectrum to gauge how they're faring personally, the ways in which their work has been influenced, and what all this madness really means. Through these conversations, we might just find the spark to make it through 2020 after all.

Andrew Boese leads The Dust Jackets, a new-ish "indie/post-punk/garage project" that recently released a self-titled EP. Whether or not said EP is actually a proper "introduction to what pop music should sound like in 2020," there's little denying the gusto and tenacity Boese brings to the table. By spinning in new experimental layers and a heaping helping of swagger, he's made something extra fresh of garage rock staples.

Phoenix New Times: How are you managing? Any observations from all this?
Andrew Boese: I've always been kind of a shut-in anyhow. Creating has always been a private process, but now exposing it to people, that's the big loss right now.

What's been the most personally challenging thing for you in creating music now?
I personally like to do a rough draft of the song, where we'll work something out, and then work out the kinks live. Just to see how the audience reacts, and then change stuff up that way. Now, when I don't have that reaction, my writing process has completely changed. Too much change in too quick of a time can be very detrimental to the artistic process.

How have the songs actually shifted then?
I know my songs have drastically changed over the past few months where I'm writing for studio now. I'm writing songs that, for the most part, are going to be very difficult to play live in their current status. I'm really experimenting with different tones and instruments and stuff.

I've always tried to create music that's a reflection of who I am. And by extension, that means what I'm going through at that time, place, and my surroundings — they should all be part of that sound.

And so hopefully this, the music that I'm creating now, when I look back on it, it should sound like that, which might not necessarily a positive thing. It's going to be songs about alienation and fear, but it should be honest. If you're not being honest, you're just lying to someone.


Have any of the lyrical motifs changed at all? If you're reflecting who you are now, does that automatically mean touching on social or political things/events?
You might work for six months and be like, "This song really means something to me." But unless that song has a lot more going for it, something that can be timeless, then it's just going to be a disposable song, and I don't like the idea of that. Unless you have something like Bob Dylan, whose songs were about a specific thing at that time, like the Watts riots. But if you look at that song, and you don't know what riots are, it doesn't matter because there's another layer you can relate to personally.

Is there something that's happening now that could shift how musicians conduct business?
I think the last few months, for the people that have been holding back on making that jump into all the streaming platforms, they're now being forced. I'd never been on all the streaming sites, but now I got nothing but time, so I might as well make it work.

Because if you're spending most of your time doing learning, new distribution and new technology and stuff, as opposed to creating your art, writing songs, then it's at a loss. If you just break that term [music business] in half, you get 50 percent music and 50 percent business.

I think the new artists that are coming out of this that don't know better are actually going to persevere through it better than people that are used to old ways. Because they're not relying on that crutch, and they're not expecting something else. If anything, they'll find new ways to get their music out there.
KEEP PHOENIX NEW TIMES FREE... Since we started Phoenix New Times, it has been defined as the free, independent voice of Phoenix, and we'd like to keep it that way. With local media under siege, it's more important than ever for us to rally support behind funding our local journalism. You can help by participating in our "I Support" program, allowing us to keep offering readers access to our incisive coverage of local news, food and culture with no paywalls.
Make a one-time donation today for as little as $1.
Chris Coplan has been a professional writer since the 2010s, having started his professional career at Consequence of Sound. Since then, he's also been published with TIME, Complex, and other outlets. He lives in Central Phoenix with his fiancee, a dumb but lovable dog, and two bossy cats.
Contact: Chris Coplan
Follow:
Twitter: @CCoplan