Alexander Reith, one of the four members of Phoenix-based Holy Fawn, says, "I think, collectively, what makes Holy Fawn work is that we have pretty eclectic taste that covers a really wide sonic palette." Matt Cardinal
Once upon a time, before the internet, we all had to go to the record store to buy music. For those who listened to the radio, the hunt was relatively easy.

But what about those of us who were looking for something different? Artists who were not so easily categorized? The ones who didn’t have a plastic divider with their name written with a Sharpie? Those who didn’t even fit into a specific genre?

Luckily, life is still bringing us artists who are not so easily defined. The four-member band Holy Fawn call Phoenix their hometown, and with their recent tour and the September release of their latest album, Dimensional Bleed, they are here to let any listener know that such categorization is limiting.

In a recent email interview with Phoenix New Times, bassist Alexander Reith explains, “Genres are really interesting in theory but in many cases, I feel putting things in boxes isn't necessarily healthy. ‘Shoegazer’ in particular is a really loose term and I think it doesn't necessarily describe anything very well. To be honest, whenever people ask what we sound like, we just like to say, 'loud, heavy, pretty noises,' and that just feels more succinct.”

Well, here’s some School of Rock.

Just in case you didn’t know, there is a category known as “Shoegazer,” and it’s never been given a Sharpie divider card. It’s just shoved into “Alternative.”

It’s considered to be a subgenre of alternative rock in which sounds are created from many guitar effects pedals. These pedals, which of course are placed at the feet of a musician, inspired the term “shoegazing” — it’s as if the band is focused on the pedals by their shoes. And, well, they are.

The Jesus and Mary Chain, Lush, Cocteau Twins, early Catherine Wheel, and undoubtedly, My Bloody Valentine are synonymous with this sound. Google “Shoegazer” as a genre, and you should.

Why? It’s a very emotional music in a different way. It’s powerful because it is not really predictable in any way. A listener is consumed in a wall of sound, and those last three words perfectly describe Holy Fawn’s sound. And that is to say it’s quite undefinable.

Reith is happy to explain the science or maybe even the mystery of influence. “I think, collectively, what makes Holy Fawn work is that we have pretty eclectic taste that covers a really wide sonic palette. I'd say as a whole, pretty much any genre is fair game, especially when we're driving in the van.”

It’s remarkable that a band can travel in a van and not fight over controlling the car’s stereo, a feat most of us traveling with mere friends and family can’t seem to sort out. Once again, this is proof that Holy Fawn — also including Ryan Osterman (guitar, vocals), Evan Phelps (guitar), and Austin Reinholz (drums) — don’t sound like anyone in particular.
It may well be because a Holy Fawn record is true art. The band’s music is truly beautiful. But yet again, way more mysterious. And those videos you’ve just pulled up on YouTube? They’re definitely left up to interpretation. One word: Whoa.

But yet one word to describe their sound? Ethereal is the overused word but while it fits, you will be challenged to hear the lyrics. Is that even the point? Perhaps Holy Fawn want the listener to take in all of the elements heard unlike nearly everything else we hear that focuses on a lead singer. 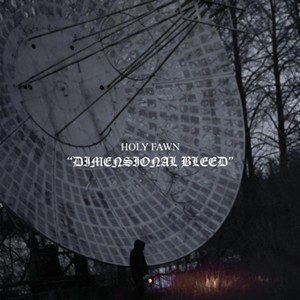 So who are they influenced by? I mean, really. Inquiring minds want to know but Holy Fawn probably want you to figure it out. Reith reveals very little. “Above all else, I think life and the circumstances of where we were at directly influenced Dimensional Bleed. Like the rest of the world, we were under lockdown when we began the recording process for the new record. It was months before any of us were even in the same room, just recording and emailing each other demos back and forth. I'm sure we were all listening to something to get inspired but the circumstances of the world had a greater impact on it by far," he says.

This might explain the darkness. Dimensional Bleed is far from happy but yet it is quite soothing in its own way. A bath of really warm guitars, echoed vocals, and occasional bursts of power — to keep you from slipping under the water.

It’s quite refreshing when compared to the dry rock of the Arizona desert. One of the beautiful things about the Valley of the Sun is how eclectic Phoenix truly is. Holy Fawn do not sound like the Southwest, and actually just did some dates in the United Kingdom. But still, Arizona resonates.

Reith proudly states, “Not all of us were born in Phoenix proper but we were all raised and spent our formative years around Phoenix. It's definitely our home.”

Holy Fawn. Upcoming local legend? Perhaps. Give them a listen. Decide for yourself. Look them up on YouTube.

You might notice they have a shitload  of guitar pedals. And there’s absolutely nothing wrong with that.
KEEP PHOENIX NEW TIMES FREE... Since we started Phoenix New Times, it has been defined as the free, independent voice of Phoenix, and we'd like to keep it that way. With local media under siege, it's more important than ever for us to rally support behind funding our local journalism. You can help by participating in our "I Support" program, allowing us to keep offering readers access to our incisive coverage of local news, food and culture with no paywalls.
Make a one-time donation today for as little as $1.
Mr. P-Body