Hopefuls vying for Adel's seat had just over two weeks to collect the signatures needed to get on the primary ballot — for Democrats, 4,289; for Republicans, 4,528.

The deadline for filing those signatures was Monday evening. Just four candidates, three Republicans and lone Democrat Julie Gunnigle, remain in the running.

Anni Foster, a Republican currently serving as Governor Doug Ducey's general counsel, reported the most signatures, at 11,000. No other candidate managed more than 6,000. Gunnigle, though, secured her requisite signatures in just 24 hours, far more quickly than her opponents, who spent the last two weeks canvassing.

Currently, the Maricopa County Board of Supervisors is pondering an interim replacement for Adel. Then, in November, voters will elect the successor — who will take over an office that has been mired in scandals even before Adel's tenure, setting the tone for criminal justice in one of the largest counties in the nation.

Here's what we know about the four candidates, so far:

Gunnigle ran against Adel in 2020 and lost by a single percentage point. Since, she has remained a prominent face in local politics, serving for a stint of political director of Arizona NORML, a cannabis justice advocacy group, and tackling various high-profile cases as a private attorney.

She has been a vocal critic of Adel and her office.

Gunnigle is positioning herself as a gutsy outsider candidate in a field of MCAO bureaucrats. On Monday afternoon, she held her official campaign launch outside the county administration building, telling Phoenix New Times that her opponents “have not even shown lip service to reform.”

For Gunnigle, that would mean a unit specifically to investigate police use-of-force cases, she has said, and a plan to address racial disparities in sentencing.

When she ran against Adel previously, she was called a "radical." This time around, her opponents have focused on her relative lack of experience at MCAO, though Gunnigle did work as a prosecutor for a time in Illinois — where her record was not entirely a progressive one.

Gunnigle rebuffs those criticisms about her experience. “Twenty-five years in the Maricopa County Attorney’s Office is frankly disqualifying,” she said.

“We’ve seen what this office has produced,” she said. “It’s produced Andrew Thomas, it’s produced Bill Montgomery, it stood by while [former Maricopa County Sheriff Joe] Arpaio policies were enforced, and most recently, the historically bad tenure of Allister Adel.”

Gunnigle has made abortion rights central to her platform. She is emphatic that she would not prosecute any abortion cases — even if it becomes illegal in the state. Her opponents, meanwhile, have not made such a commitment.

This could very well be the case during Gunnigle’s tenure, should she win in November. The U.S. Supreme Court could overturn Roe v. Wade in June when the high court considers a case from Mississippi. In Arizona, the ending of Roe could make abortions illegal immediately, due to old abortion restrictions that are still on the books.

Mitchell has spent her long career as a prosecutor at MCAO — 30 years, she emphasized. For most of that time, she worked at the county's sex crimes division, becoming the head of that bureau, then moving up to become chief deputy.

A longtime Republican, Mitchell made her name nationally in 2018 when, at the behest of Republican U.S. senators, she flew to Washington to interrogate then-Supreme Court nominee Brett Kavanaugh and Christine Blasey Ford, who had accused him of a sexual assault decades earlier.
click to enlarge

Rachel Mitchell at the Brett Kavanaugh confirmation hearings in Washington.
Erin Schaff/Getty Images
In an interview with New Times, Mitchell played up her experience and her focus on restoring credibility to an agency that has been plagued by scandals. “I am a leader,” she said. “I have the experience to turn [MCAO] around. And I love the office, I've worked there for 30 years. I care about its integrity, people's perception of it."

Asked about specific policies or reforms she would focus on as County Attorney, she said: “There’s always reform going on because society is changing and you’re responding to that."

Mitchell said she would focus on diversion programs "distinguishing between people who really could benefit from diversion, who are not a danger to society, and those who are." She also highlighted victims' rights, which she said had suffered under Adel.

Mitchell was one of several top prosecutors in Maricopa County who signed a letter in February demanding Adel's resignation. But Gunnigle and other critics have questioned why Mitchell waited until, apparently, the eleventh hour to speak out against her boss.

Mitchell said Monday she was not aware of the full extent of the problems until the end of 2021. "What I would say is this. When she was having her problems, they were not known to us, initially," she said. "It was a process to get to where we really understood what was going on." At that point, she said, she felt a "duty" to speak up.

As for the prosecutions of protesters for bogus gang charges, which came to light in 2020, Mitchell said she was "not involved." She said she was tapped to review those cases later, once there was a public outcry. The charges were dropped as a result of internal reviews, she said.

In her current role, she has worked to push back on cities’ vaccine mandates, defended Ducey’s policy of withholding federal COVID-19 relief funds from schools with mask mandates, and worked on the high-profile sports betting lawsuit, which the state won, allowing sports gambling to proceed.

Prior to her work with Ducey, Foster has served in several roles as an attorney for the state of Arizona.  She was counsel for the Department of Public Safety and an assistant attorney general.

Foster did not return interview requests from New Times. But she has laid out a solid "rule-of-law" platform, with an emphasis on "prosecuting criminals" and opposing the criminal justice rallying cry "defund the police," according to her website.

In a questionnaire curated by EZAZ.org, a conservative advocacy group run by former Phoenix mayoral candidate Merissa Hamilton, Foster describes herself as a "constitutional conservative," and staunchly pro-public safety.

"Over the past few years we have seen cities like San Francisco, Seattle and Portland become uninhabitable because of rising crime and negative attitudes towards law enforcement," Foster wrote in her answers. "For years, cities like these have chipped away at prosecution policies to the point where there are no longer consequences for criminals."

"We can’t let that happen here in Maricopa County," she said.

The connection between progressive prosecution and crime in such cities is decidedly unclear, and crime is not rising in San Francisco.

Like her colleagues, Foster also promised to "restore confidence" in the office, with a focus on building relationships with law enforcement and "vigorously prosecuting" people for more serious crimes.

Godbehere, current Goodyear city prosecutor and longtime MCAO attorney, is running on a similar platform to Mitchell. Both are career prosecutors and have touted that experience. Godbehere worked for two decades as a prosecutor at MCAO, in various units, though did not rise as high in the ranks of the office as Mitchell.

But while Mitchell has taken a somewhat softer stance on policing and prosecutorial reforms, touting her experience reviewing cases for prosecutorial misconduct, Godbehere is resolutely “tough on crime,” according to her campaign materials.

She has collected endorsement from far-right candidates, including Kari Lake, who urgently requested her supporters to get Godbehere on the ballot. “The Dems got their candidate her signatures in 24 hours. Not sure how that’s even possible!” Lake wrote on Twitter. 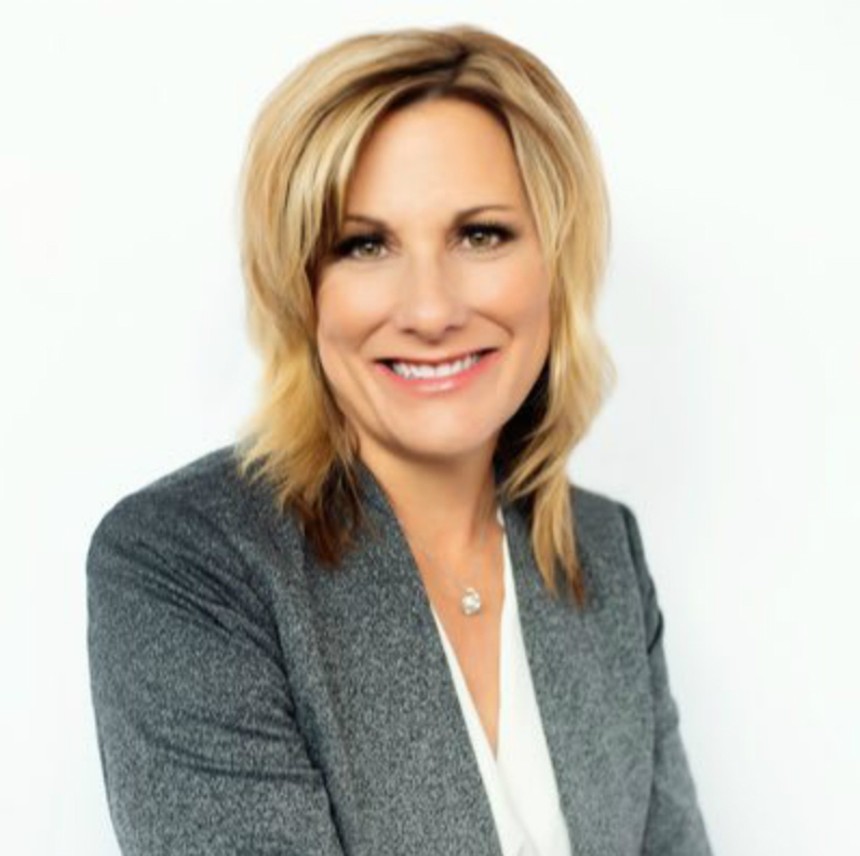 Gina Godbehere
Via social media
Godbehere did not return inquiries from New Times about her platform.

But in her own answers to questions from EZAZ, Godbehere wrote that she would oppose "dangerous anti-police rhetoric" and supported a "balanced" approach to criminal justice reform.

Like Foster, Godbehere has avoided directly answering questions on whether President Joe Biden won the 2020 election in Maricopa County, telling CBS 5 that conservatives "are concerned that there were some discrepancies and I think the key is we always have discrepancies in elections."

Godbehere plans to make "election integrity" central to her campaign, it seems. "As County Attorney, I plan to create an Election Integrity Task Force that will work to ensure all of our laws are enforced," she told EZAZ.

"Let me be clear, if there is evidence our election laws were broken, the offender will be prosecuted," she said.
KEEP PHOENIX NEW TIMES FREE... Since we started Phoenix New Times, it has been defined as the free, independent voice of Phoenix, and we'd like to keep it that way. With local media under siege, it's more important than ever for us to rally support behind funding our local journalism. You can help by participating in our "I Support" program, allowing us to keep offering readers access to our incisive coverage of local news, food and culture with no paywalls.
Make a one-time donation today for as little as $1.