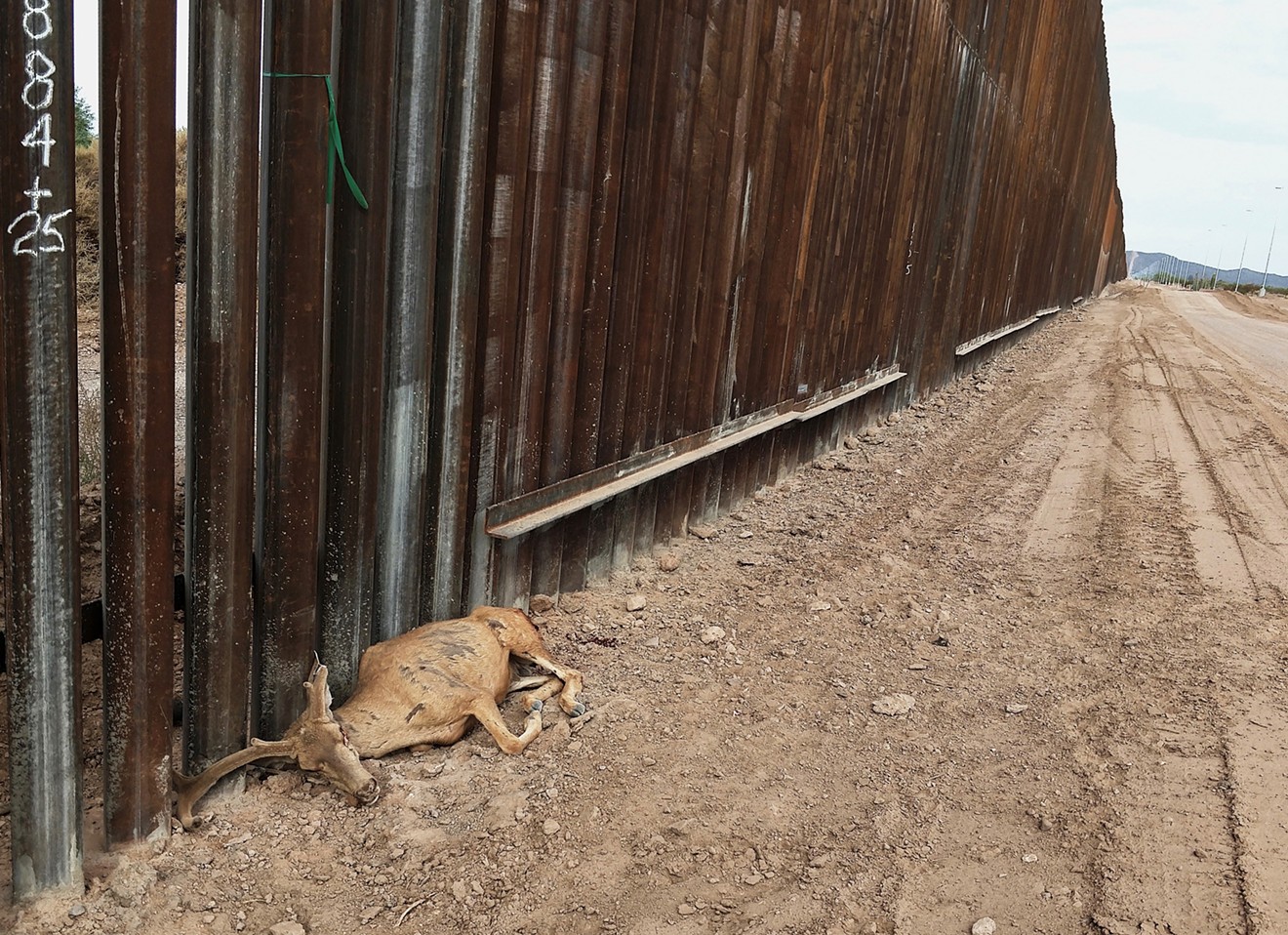 It also comes as President Donald Trump is scheduled to make another visit to the state's border region on August 18.

The photo was taken near the Dos Lomitas Ranch on Sunday, August 16, by an unknown government source who "works in the borderlands and is down there every day," according to Laiken Jordahl, a spokesperson for the Tucson-based Center for Biological Diversity. The employee, who declined to be named or interviewed, identified the animal as a mule deer and judged that the cause of death was likely from a "vehicle strike" by a passing border patrol or construction vehicle driving along the wall.

"They sent that photo to me and asked me to distribute it far and wide," Jordahl said.  "They wanted it to get out."

To Jordahl, the photo is indicative of the detrimental environmental impacts that the border wall has on local wildlife, such as mule deer, that have historically migrated between Arizona and Mexico. Hot temperatures and sparse foraging conditions in Arizona can cause mule deer to head to agricultural fields in Mexico, he said.

"You have wildlife that is accustomed to seasonal change, and then they find this massive hulking wall in their path," Jordahl said. "We’re extremely concerned about wildlife hitting this wall and then walking diagonally trying to get through when in reality it’s a 30-mile stretch of wall, and that’s where all the Border Patrol and construction vehicles are speeding past."

"When you slice their habitats in two, in the midst of severe drought and climate change, we’re going to see a lot more animals dying in the shadow of the border wall," he added.

A spokesperson for U.S. Customs and Border Protection did not respond to New Times' requests for comment.

Laiken posted the photo to Twitter on August 17, prompting a litany of searing criticisms.

"This is very heartbreaking. Wildlife migration blocked by an unnecessary wall. #NoBorders," a Twitter user wrote.

Mule deer, bighorn & endangered pronghorn have crossed the "border" at Organ Pipe unimpeded for millennia. But this year, for the first time, a metal mass cuts the landscape in two.

This buck was found dead yesterday--trapped by the wall--in the hottest month of the year. pic.twitter.com/OS6x7dXVhH


The outcry comes just before Trump is slated to appear at the Joe Foss Hanger in Yuma today, where he will talk about Democratic presidential nominee Joe Biden's "failures on immigration and border security," according to news reports.

Arizona has been deemed a battleground state in the 2020 presidential election, with numerous polls showing Trump trailing Biden in the state.

Trump's border wall project in southern Arizona has faced regular criticism for its environmental impacts and alleged destruction of Native American cultural sites. Recently revealed internal emails also show U.S. Fish and Wildlife Service staff warning federal officials about the destructive impact of the border wall construction on the San Bernardino Wildlife Refuge.
KEEP PHOENIX NEW TIMES FREE... Since we started Phoenix New Times, it has been defined as the free, independent voice of Phoenix, and we'd like to keep it that way. With local media under siege, it's more important than ever for us to rally support behind funding our local journalism. You can help by participating in our "I Support" program, allowing us to keep offering readers access to our incisive coverage of local news, food and culture with no paywalls.
Make a one-time donation today for as little as $1.